Is it possible for a Formula One car to drive through Monaco’s infamous Portier tunnel upside down? Well, the short answer is yes. Assuming you can solve a few technical wrinkles relating to oil and fuel starvation, one ex-Jordan boffin has calculated that an F1 racer should be able to stick to the tunnel’s ceiling at just a smidge over 120mph. And while no driver would ever consider taking Monaco’s unique ‘over-side’ lane (well, apart from Kobayashi perhaps), it does demonstrate the insane levels of downforce F1 cars are capable of generating.

Generally, the laws of aerodynamics dictate that increased downforce and grip comes at the expense of straight-line speed, therefore team engineers have to strike a fine balance between the two based on track layout. So while high speed venues like Spa and Monza don’t need a lot of ‘wing’, at the short n’ twisty city circuits they bolt ruddy great barn doors on every square inch they can get away with; it’s always a compromise. Surely, The Holy Grail of motorsport engineering would be to come up with a new way to get the best of both worlds?

Well, as we all know, motorsport engineers are the most ingenious, cunning and devious creatures that God ever blessed with opposable thumbs, and in the 1970s two American and British race teams came up with a wily idea that didn’t just bend the F1 rule book – it was beaten, battered and screwed into a tube to forcefully pleasure the befuddled scrutineers in the ancient Greek style. 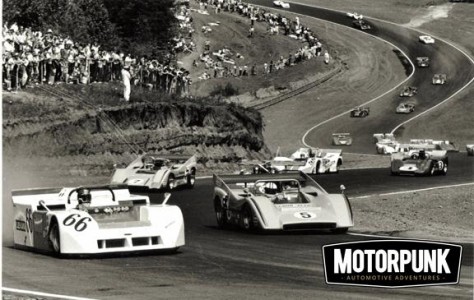 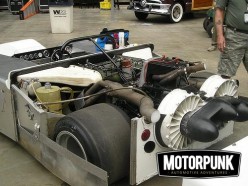 The story of the first proper ‘sucker car’ began in 1970 when the American Jim Hall installed two huge fans under the rear of his Chaparral 2J ‘CanAm’ racer. Powered by a dedicated two-stroke motor scavenged from an old snowmobile the fans drew in air away from the cars underbody, creating enormous negative pressures, which literally hoovered it to the tarmac. The idea worked brilliantly, lapping 2 seconds quicker than their nearest rivals in the SCCA series during practice; but sadly, come race day the cars were usually plagued with mechanical gremlins. Worried that Chaparral would eventually iron out all its problems and dominate the series the other race teams, especially McLaren, petitioned to get the 2J banned; although ultimately, it was safety concerns that the 2J’s rear facing fans were blasting stones and debris into the faces of pursuing race drivers that got the Chaparral outlawed before the season was even finished. The short-lived 2J may never won a race but it did provide Brabham’s new design guru, Gordon Murray, inspiration for his beautifully engineered BT46B ‘Fan Car’. 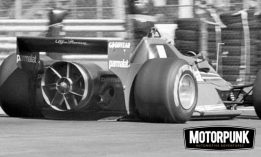 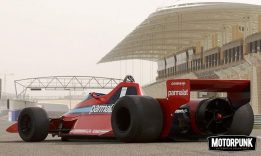 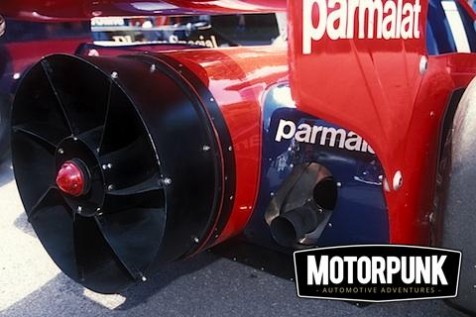 In 1978 Brabham were desperately chasing the JPS-liveried Lotus 78 in the F1 championship, as Colin Chapman’s team had finally perfected the principal of ‘ground-effect’ which created negative pressure below the Lotus (through a clever use of underbody aerodynamics, ducts and skirts) to give it housefly-like cornering. To beat Chapman’s Lotus 78 it was going to take something equally cunning, but Murray could not build a ground-effect car around the Brabham’s broad flat-12 engine. So for fresh ideas he looked to find a loop hole in the F1 rule book. That is where this fabulous 6 minute film from the BBC picks up the fascinating story of the Race Cars that Sucked. Enjoy.