The 1992 Formula One season was dominated, to the point of boredom, by Mansell and Patrese in the Williams FW14B – but the wacky goings-on at the other end of the pitlane in the garages of the fledgling Italian outfit, Andrea Moda, were far more entertaining.

Widely acknowledged as one of the most shambolic racing team to ever join the Grand Prix circus, circuit officials, race pundits and other team bosses were often left shaking their heads, dumbstruck that this could honestly be a serious professional F1 competitor. Of the dozen events Moda entered, their two race cars ‘Did Not Pre-Qualify’ 11 times, ‘Withdrew’ 5 times, ‘Did Not Qualify’ 3 times, ‘Excluded’ on technicalities 3 times and were ‘Disqualified’ once. The only race their No.1 driver, Roberto Moreno, did manage to qualify for was the 1992 Monaco Grand Prix, only to retire on lap 11 whilst running last.

For the Belgian Grand Prix in late August 1992, both Andrea Moda cars were guaranteed entry into qualifying, because Brabham had withdrawn. In qualifying, the Andrea Moda cars were the slowest on track, with Moreno 13% and Top Gear’s original Stig, Perry ‘Pel’ McCarthy, 22% slower than the car on pole. Neither qualified. In the same weekend, the team boss Andrea Sassetti was arrested in the paddock for forging invoices. When the team showed up for the next race at Monza, Ecclestone had everyone pretend that they weren’t doing Formula One any more and hid behind the bins until they just went away. 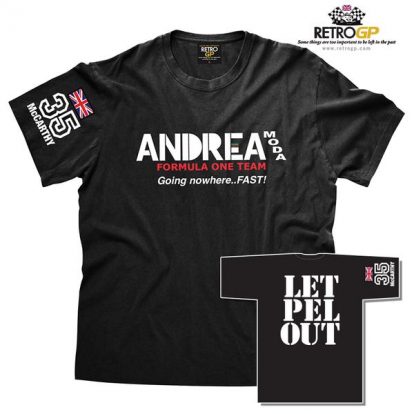 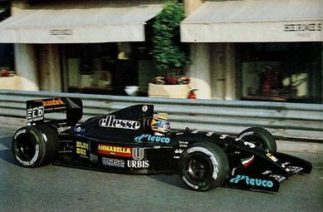 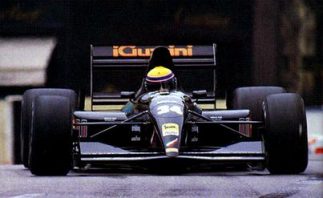 Anyhow, in issue 4 we are marking our first year in print with a snappy selection of warm-weather clobber (AKA t-shirts) which celebrate some of our favourite features from issues 1 through 4. Things such as the mighty Tuk-Tuk that appeared in our bit about the Rickshaw Run, and the infamous Brabham ‘fan car’ that we featured in issue 1. With so many to choose from, we had to cut a couple of out. This included the Andrea Moda team shirt from Retro GP featuring the oft-heard cry of ‘Let Pel Out’ as the old Stig failed, yet again, to make it onto the start grid. Coming in at No.9 in MotorPunks “Top Ten Racing Drivers We’d Like To See Race Again”, a piece that Rich penned for issue 3, this is a sartorial hat tip to one of the most charismatic F1 stars that never was, and the most shambolic racing outfit of all time.