In the 1970s everyone was mad for plaid, from Johnny Rotten to Giorgetto Giugiaro.

When the Sex Pistol’s frontman was hauled in front of the high court beak for drugs charges in February 1979, he looked resplendent in his full tartan suit and clashing plaid tie. Designed by the queen of anarchy, Vivienne Westwood, at her shop SEX on London’s Kings Road, tartan was a big thing in the punk fashion scene. The traditional design of picnic blankets, shortbread tins and thermos flasks, tartan was now sported on spiked dog collars, bondage suits and other nihilist knickknacks. And in one final middle-finger salute to the establishment, the punks principal tartan of choice (and the one of Johnny Rotten’s court appearance) was Royal Stewart, the personal tartan of Queen Elizabeth II; a tartan that, officially, should not be worn by anyone without the express permission of the Royal Household.

But anyway, my point is, that in the mid 70s tartan had somehow managed to pull of the unique trick of being both edgy and traditional at the same time, and as car designers started to loosen their kipper ties and were given more freedom to experiment, it started to appear in car interiors too. In May 1975 a young Gunhild Liljequist of VW’s in-house design team was asked to help out some engineers on an after-hours ‘skunkworks’ project for a pepped-up ‘Sport Golf’. Although this series of VW cars were named after winds (including the Passat, Scirocco, Jetta and Golf which was German for ‘gulf’ stream) the dimpled gearknob she added was a mischievous play on words. And since Scotland was the home of golf a classic Clark tartan was chosen to cover the seats of the first Mk1 Golf GTI; a fabric design that has been reinvented for every hot Golf since 2003. 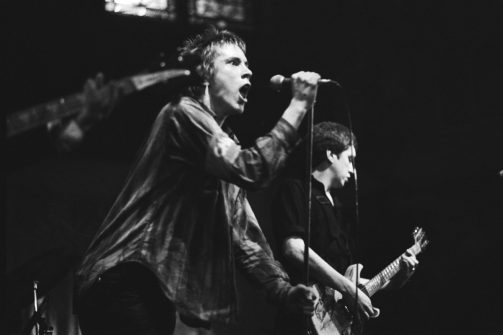 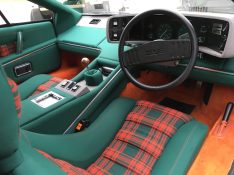 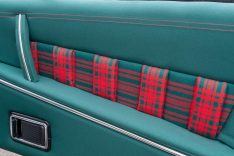 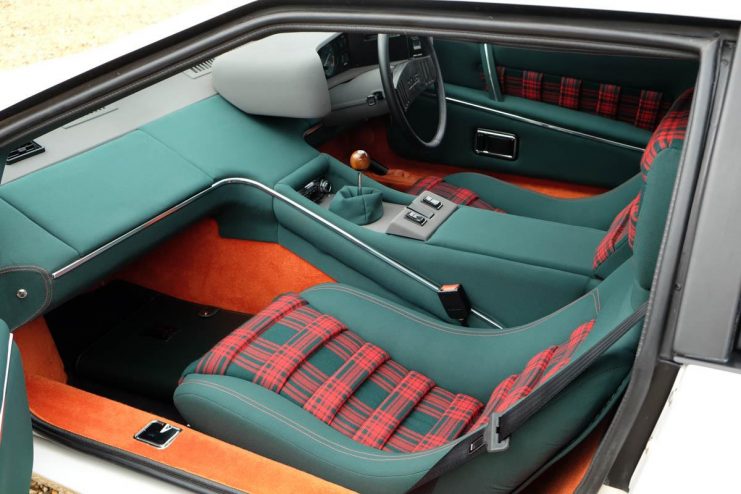 Team Lotus had long had a Scottish affiliation, first with Jim Clark and his F1 Drivers’ title in 1963 at the wheel of the Lotus 25 and later with Jackie Stewart with his trademark tartan helmet. But in 1972 work began on a replacement for the Europa with some help from Giorgetto Giugiaro from Ital Design. Simply known as “The Silver Car’ it did the rounds at a number of motorshows complete with Menzies tartan seats, headrests and headlining.

In 1975 a savvy PR chap from Hethel bribed a security guard so that he could park the pre-production Esprit in front of the studio doors were Cubby Brocolli was busy with The Spy Who Loved Me. It wasn’t long before the striking new sports car caught the eye of production staff, who promptly requested the new Esprit to star as Bond’s gadget-laden spy car; eventually loaning two Monaco White production Lotus Esprit, five body shells and two Lotus personnel, during the Sardinian car chase scenes. However, the wild red-green check, of the S1’s headrest, sent the film cameras haywire, and clashed with Sir Roger’s complexion, requiring them to be retrimmed in a plain green as you see in the ‘Wet Nellie’ scenes.

In the 1970s bold ‘punk’ tartans made an appearance in the rally-homologated Vauxhall Chevette HS and the Triumph TR7.  Between 1975 and 1980 Porsche also offered a tartan trim called ‘Schottenkaro’ in its 911, 924 and 928 models as a tasteful alternative to the eye-bending ‘Pasha’. You could also get some funky tartan options in the MkIII Capri and a tasteful grey plaid in the 1971 Dodge Challenger R/T. 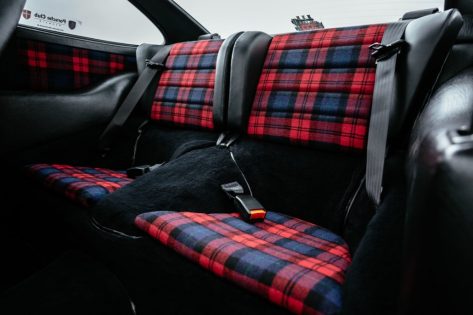 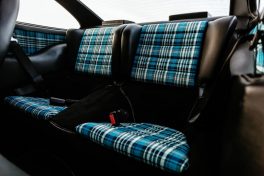 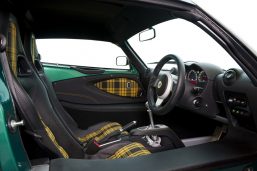 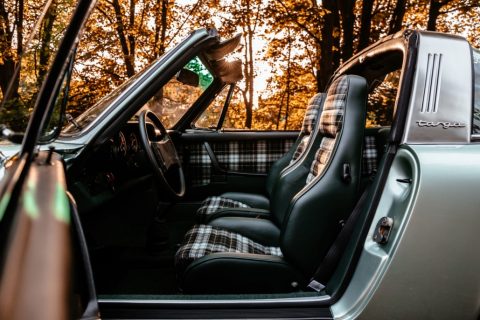 Thankfully, as everything from the 1970s seems to be cool again, tartan interiors are making a comeback. Lotus offer a Tartan Trim Pack on its new Elise in traditional Menzies ‘Heritage’ cloth and there’s even a subtle tartan option in the latest Fiat 500. As the go-to fabric for 70s punk rockers and anti-establishment ne’er-do-wells it perhaps not surprising that tartan is de rigueur in the Outlaw Porsche scene, albeit with a nod to the OEM options from back in the day.

Of course, the other advantage of busy patterns like this in car interiors is that they hide muck and stains; traditional highland tartans of the warrior clans were predominantly red in colour to hide the blood spatter. Maybe there was similar thinking behind the brown check ‘Schottenkaro’ on the loopy 930 Turbo?