We’re back from the best Revival ever. Here are twenty sartorial reviews for your perusal.

Elise has attended the Revival for a few years now and was rightly voted ‘best dressed lady’ on the day. The hat is from Seville, dress from Rouen and the fox is taken from beneath the wheels of her Facel Vega. Probably. She won a bouquet flowers and magnum of Veuve Clicquot Champagne. Congratulations, you look divine. 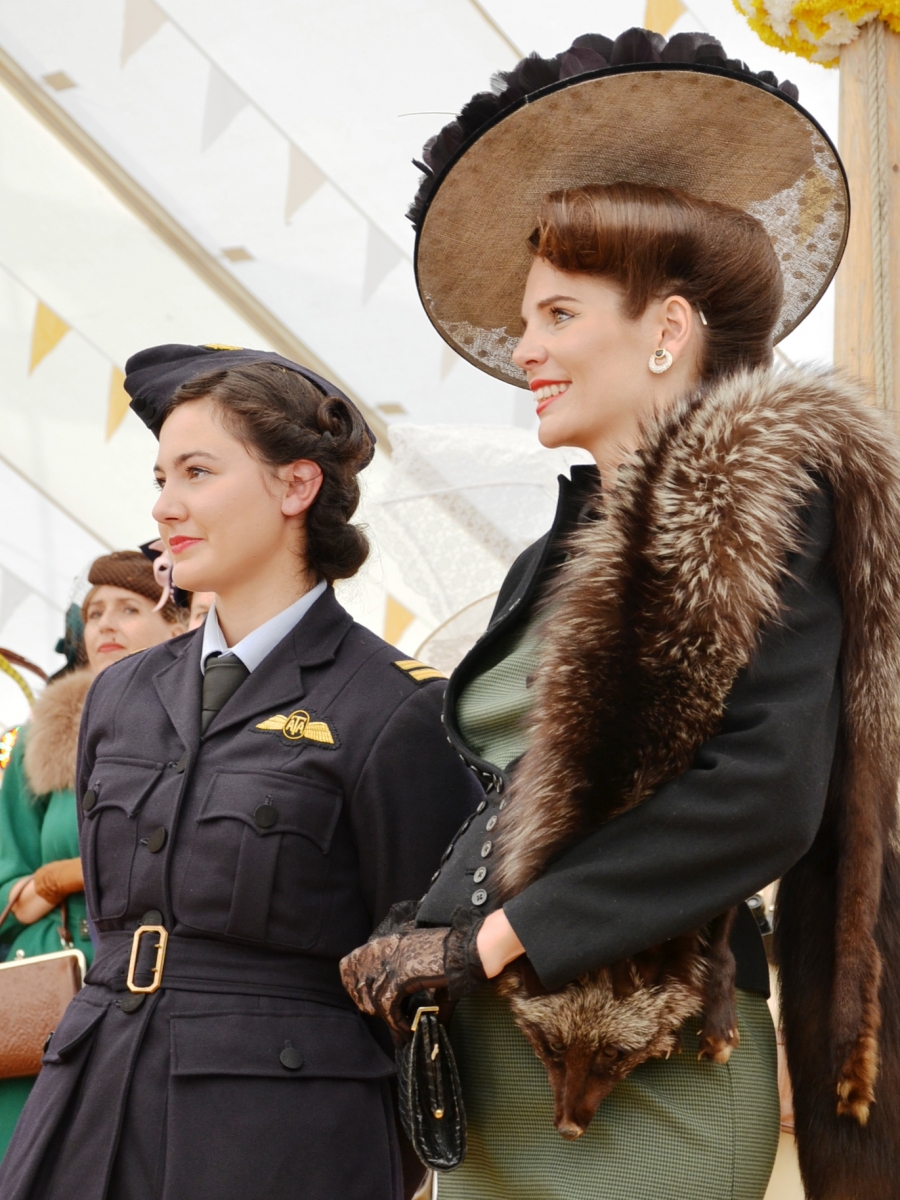 Buoyed by a bottle or two of champagne this happy fellow is unmistakeably a Berliner trying slightly too hard to be Britischer. Tartan tweed over tartan tweed with a tartan tweed deerstalker is a look even Moriarty would avoid. How do we know this? Elementary, Doktor Watson. 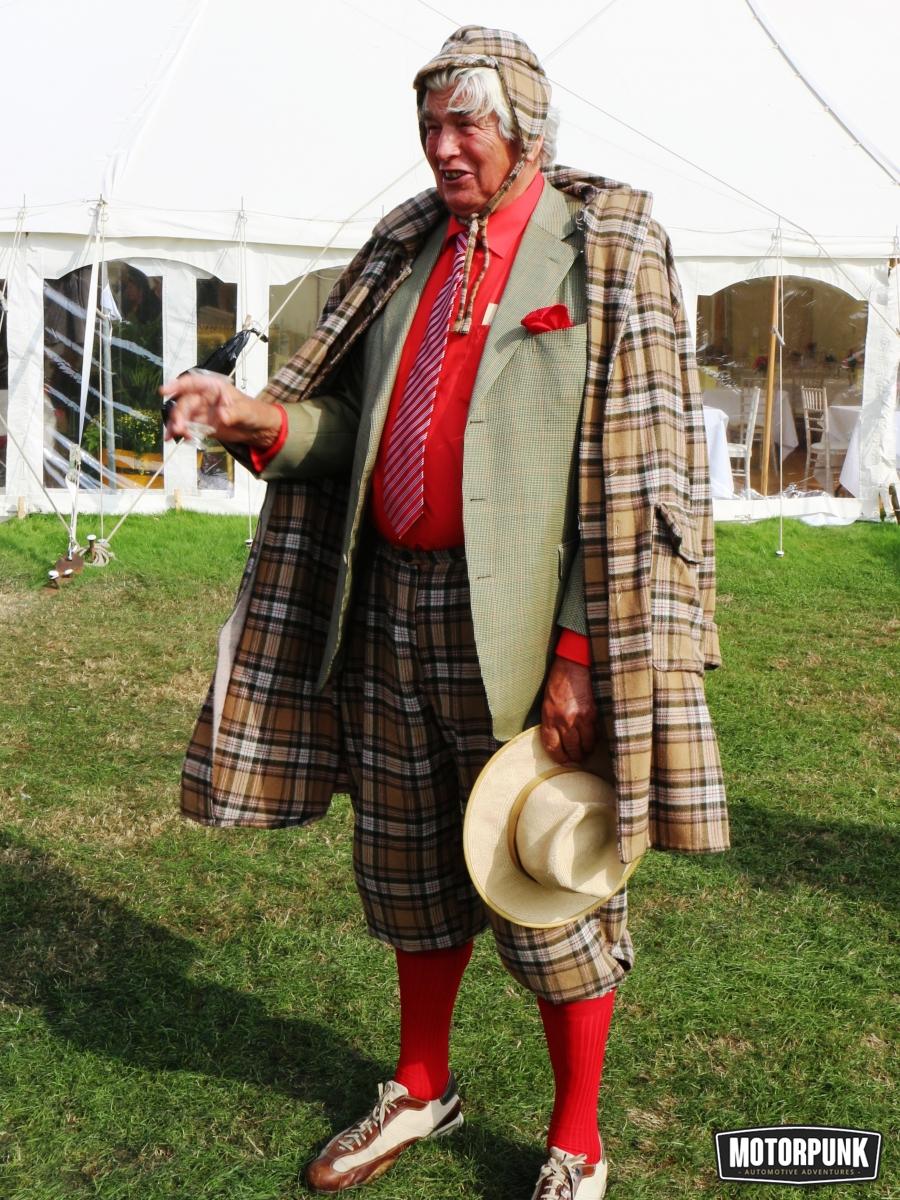 Very rarely are white trainers and baseball caps sartorially acceptable but here they’re spot-on. This college boy wears a Letterman jacket. Worn by American students in the 60’s the stripes on the jacket’s arm denote how many years the wearer has attended college and the ‘C’ on the front bears gold badges representing the different sports the wearer plays. In this case; basketball, football and baseball (a kind of limp-wristed cricket alternative). 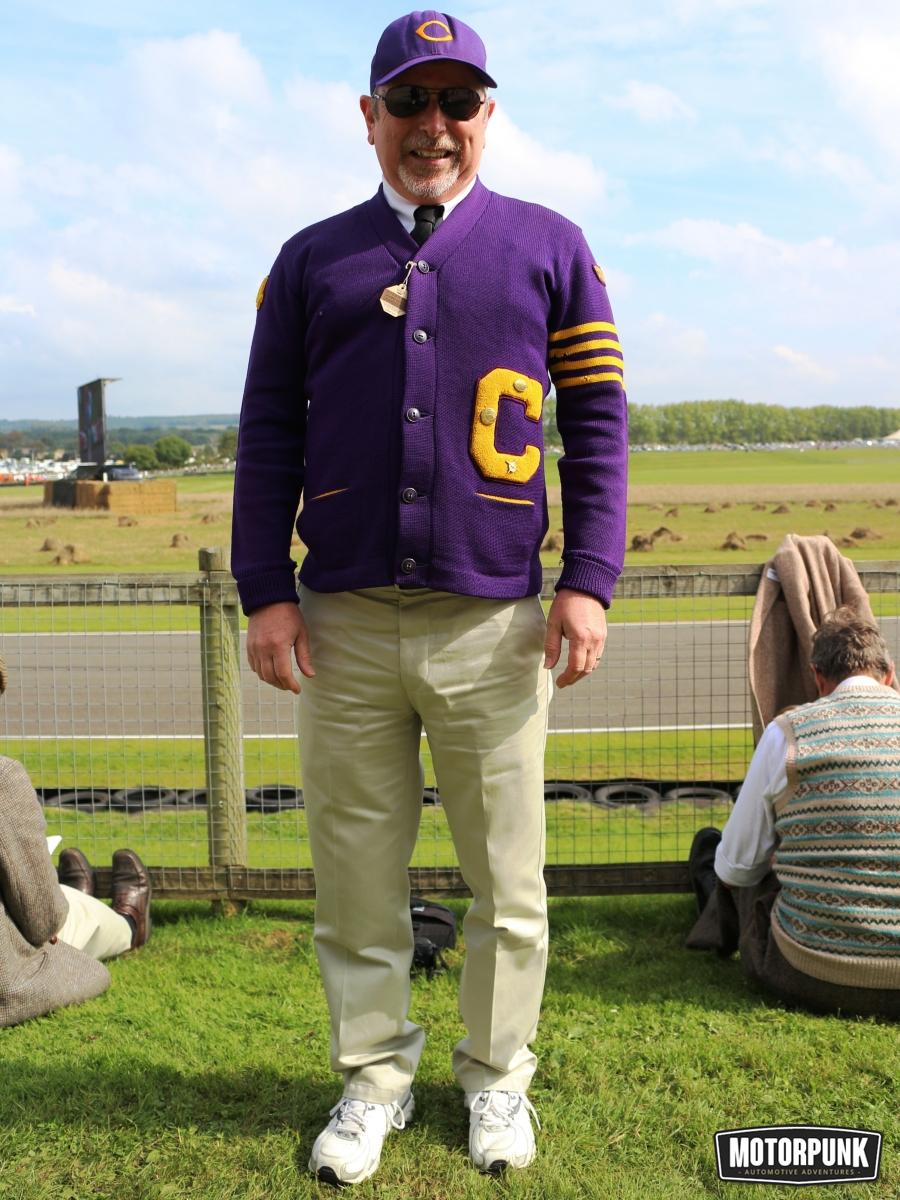 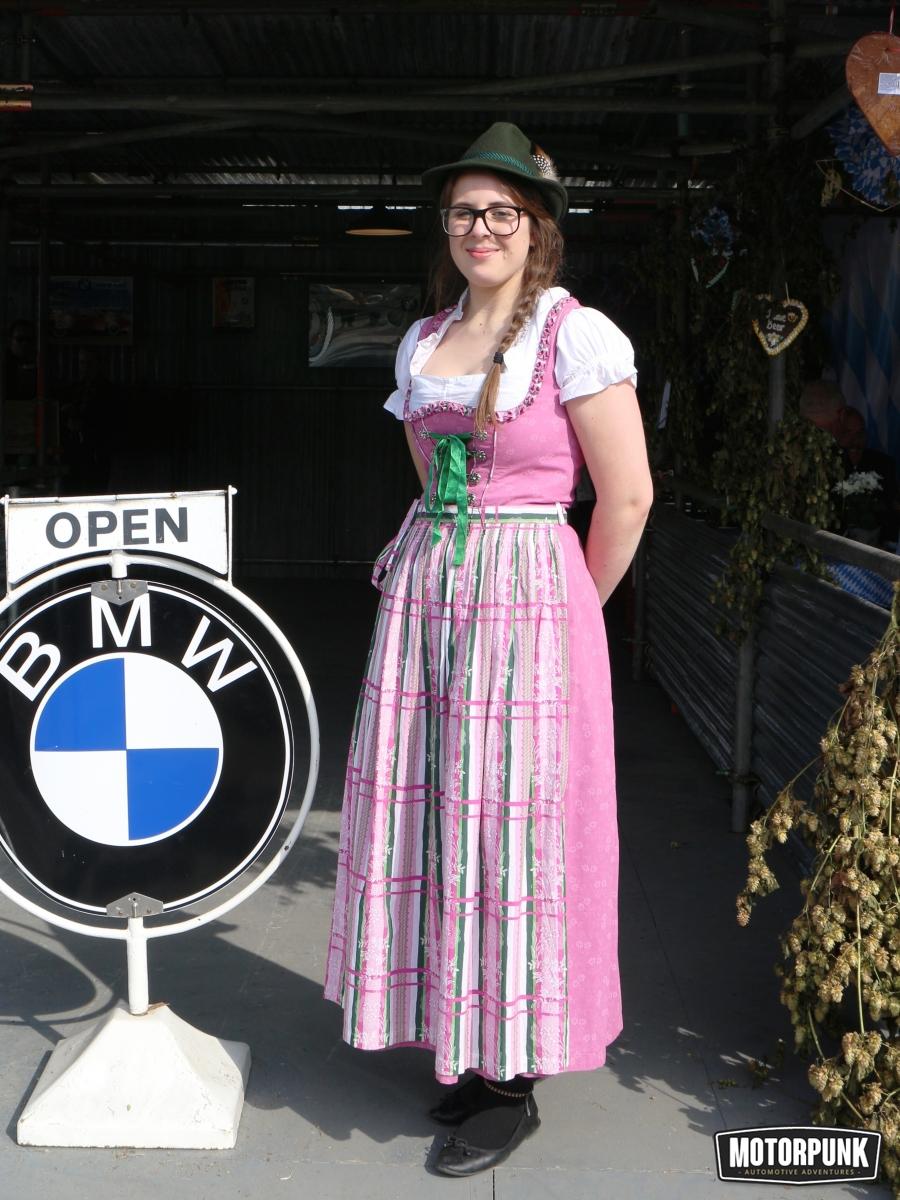 At first glance these smiling Admirals look the part, the dusty footwear can be forgiven on such a hot day, but the iron-on home-made ribbons, unbuttoned blazers and mis-matched hats give the game away. These lucky chaps all wear paddock passes and one has a rather nice Rolex Yachtmaster (oh, the irony!) so it’s safe to say that lack of budget isn’t the excuse for them having less nautical clout than the General Belgrano. 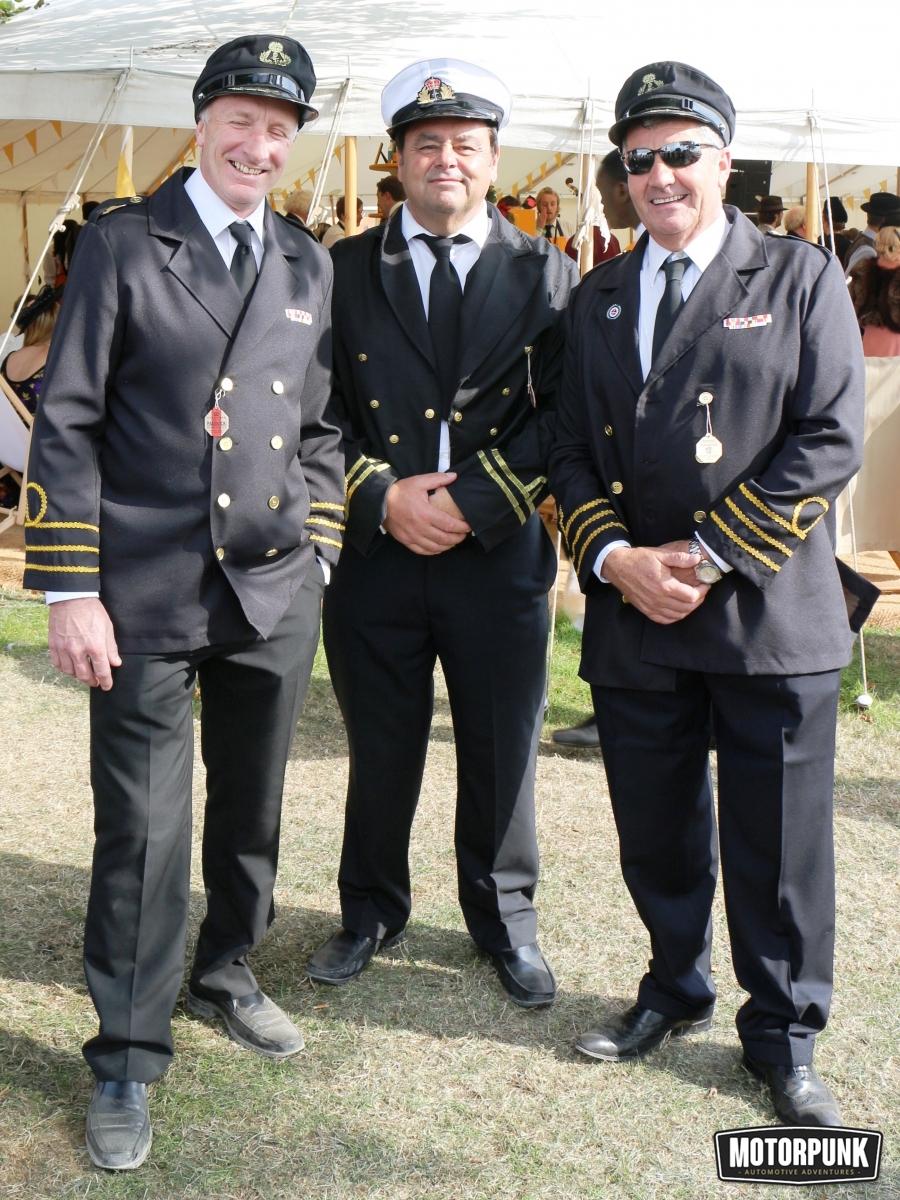 There were a few Austin Powers types in force, polyester jackets looking like fire hazards next to hot exhausts, but they all smiled and none more than this estate agent who gave the obligatory peace sign when kindly posing for this picture. The garish jacket appears to be dispersing the crowd behind the wearer here. Too Groovy for Goodwood, baby? 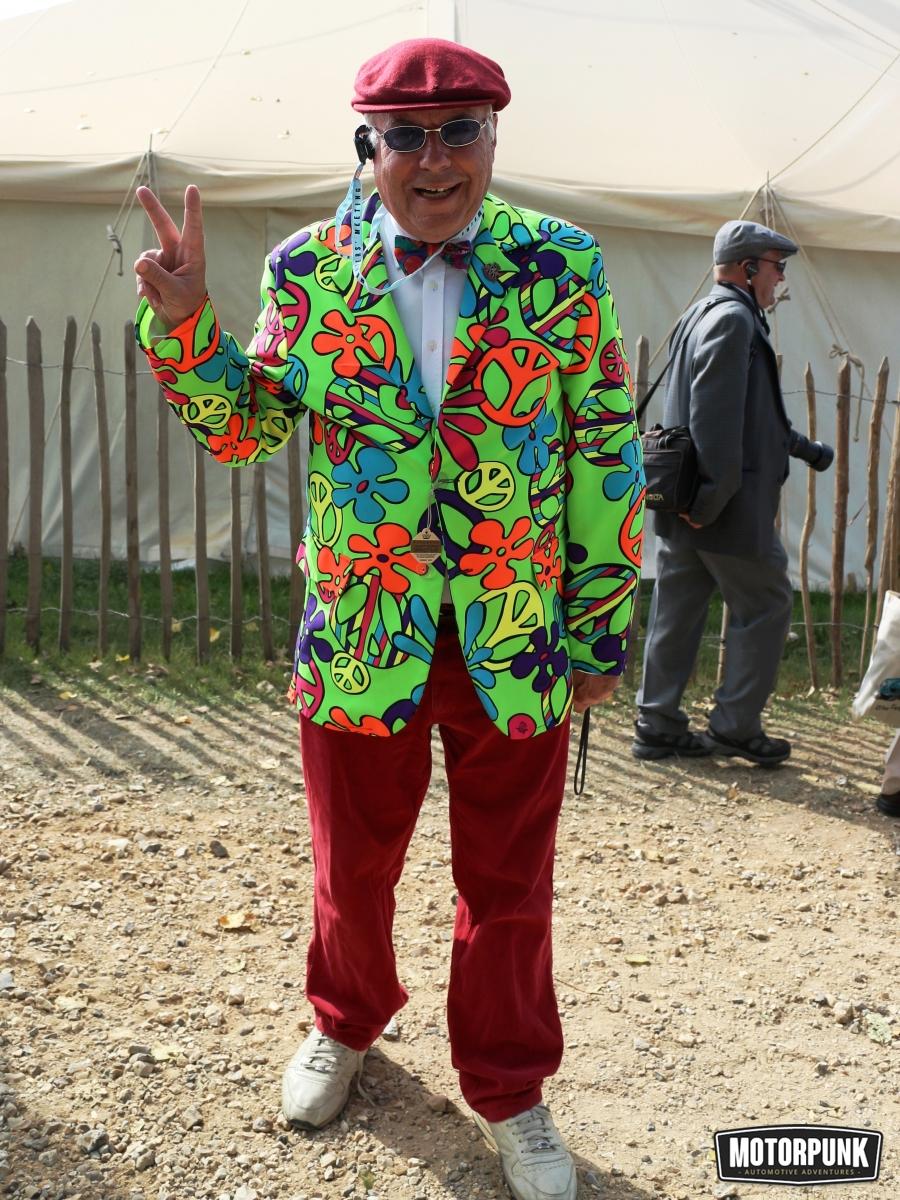 This fellow represents the few at the Revival who, for whatever reason, don’t bother with an appropriate outfit. Making the effort makes you feel part of the event and while there are no rules on what is and isn’t sartorially acceptable there are those who would ship anyone clad in orange nylon and polyester leisurewear off to Guantanamo where they’d fit in a little better. Treat yourself to some tweed, Sir! 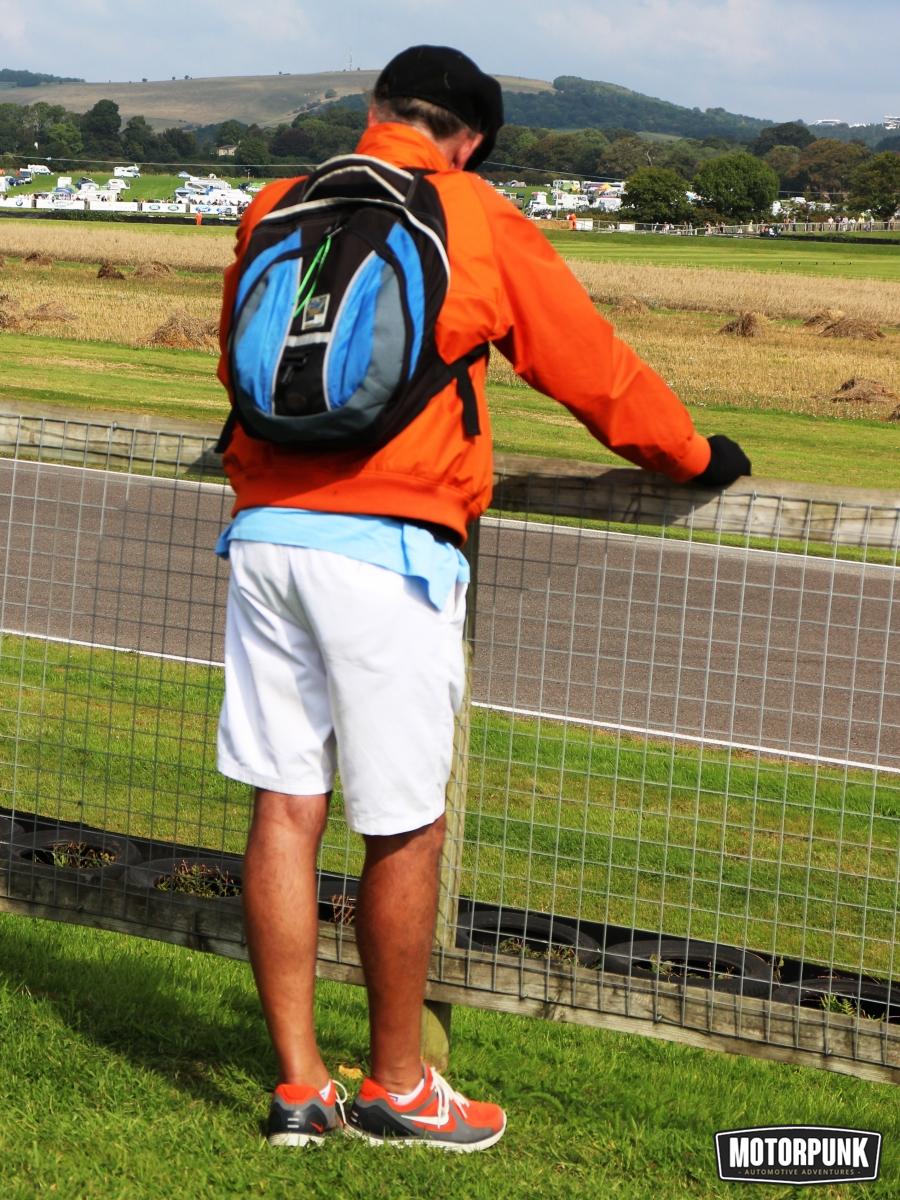 One of the joys of the Revival is the interesting people it attracts. Chatting to this happy fellow from Australia we learned that he raced classic Fords against Daniel Ricciardo’s dad down under. We met him trying a pickled egg for the first time watching the Lancasters and generally enjoying the best of Britain. We complimented his perfect uniform and headgear and was told “Mate, that’s not jast a fitha, that’s proppa ploooomage!” 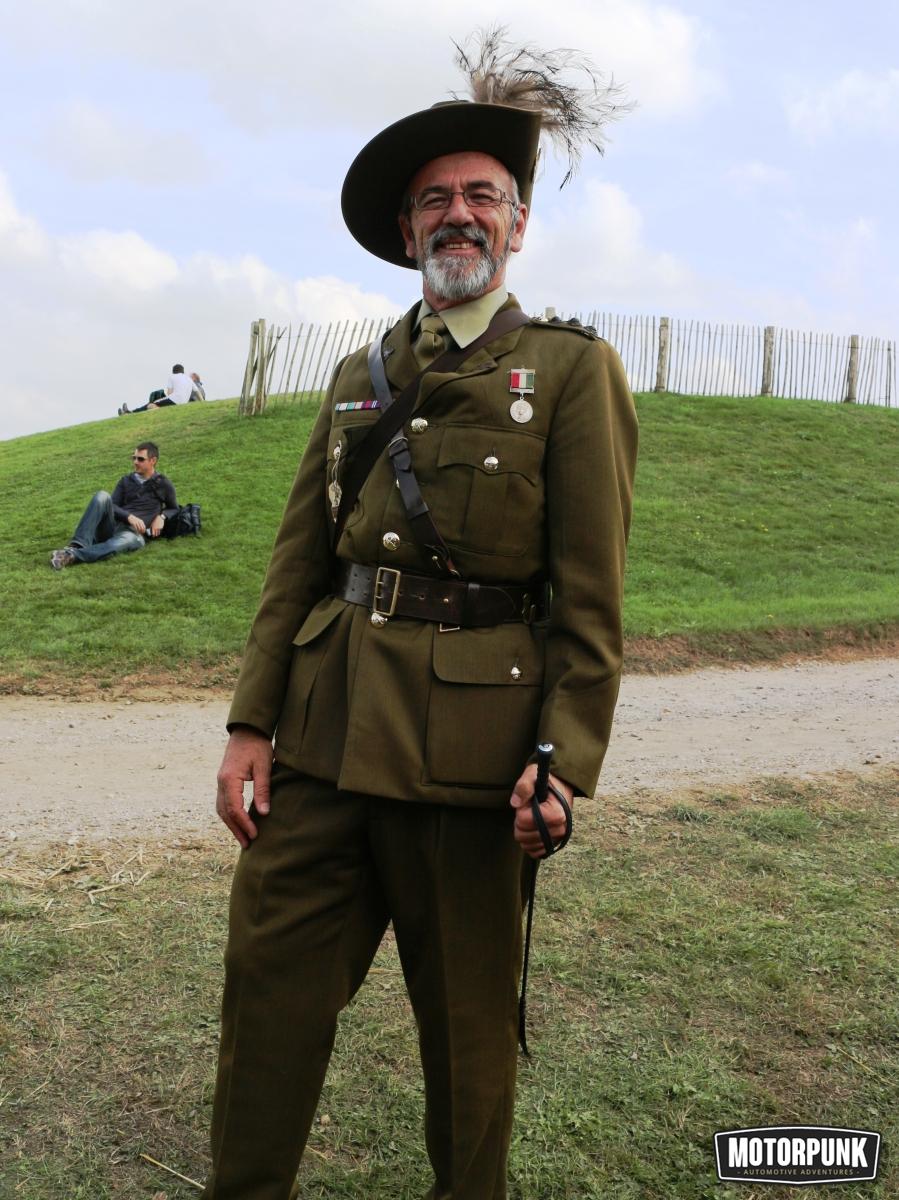 Knocking back Guinness we found this handsome couple. In flappy flares, neckerchief and bulled shoes this US navy Sergeant proved that all the girls love Sailors, even though her eyes are shut for some reason. Maybe that’s the Guinness working. 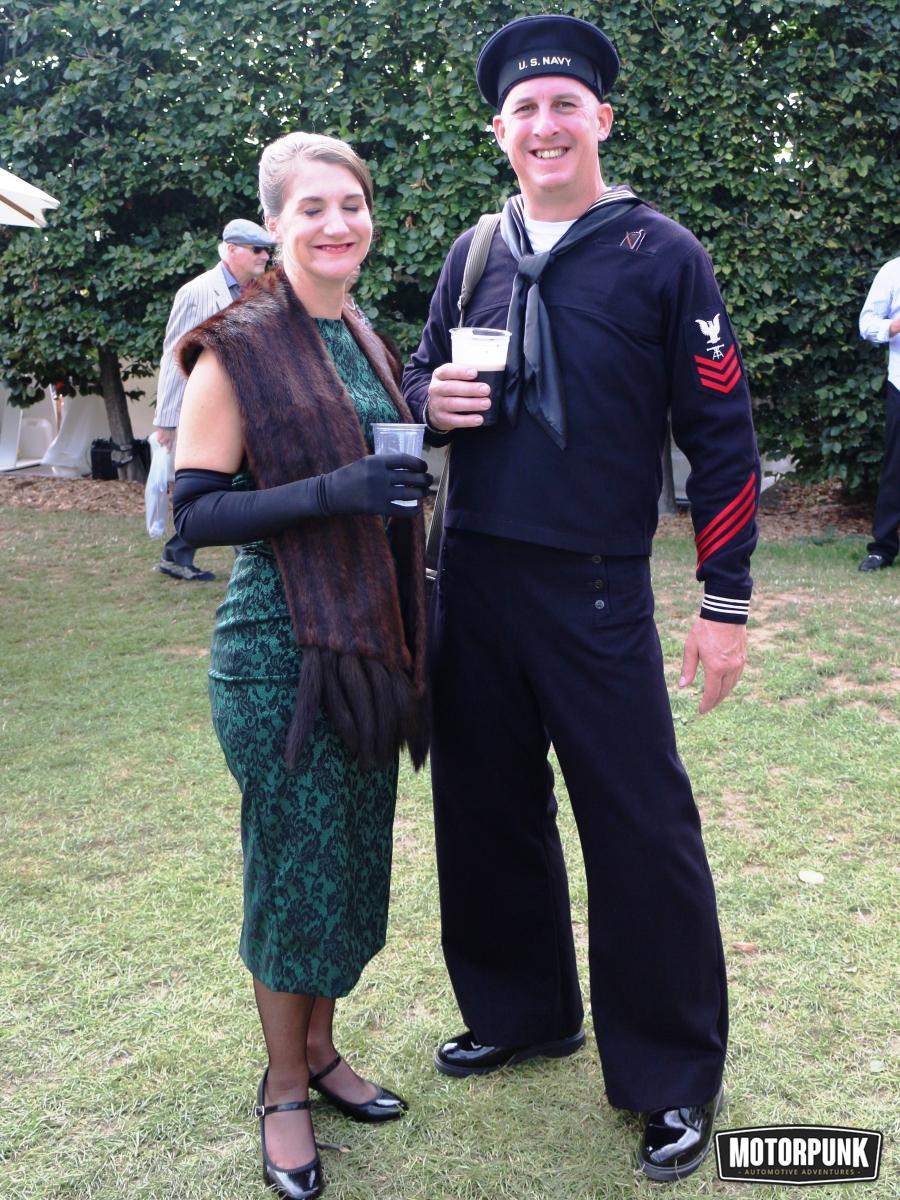 Everyone loves a land girl and these three were perfectly turned out. Too perfectly, perhaps. No mucky fingernails here, just perfect make-up on pretty faces and Hunter wellies that are cleaner than my carpet. Have any of you lovelies ever dug a spud? 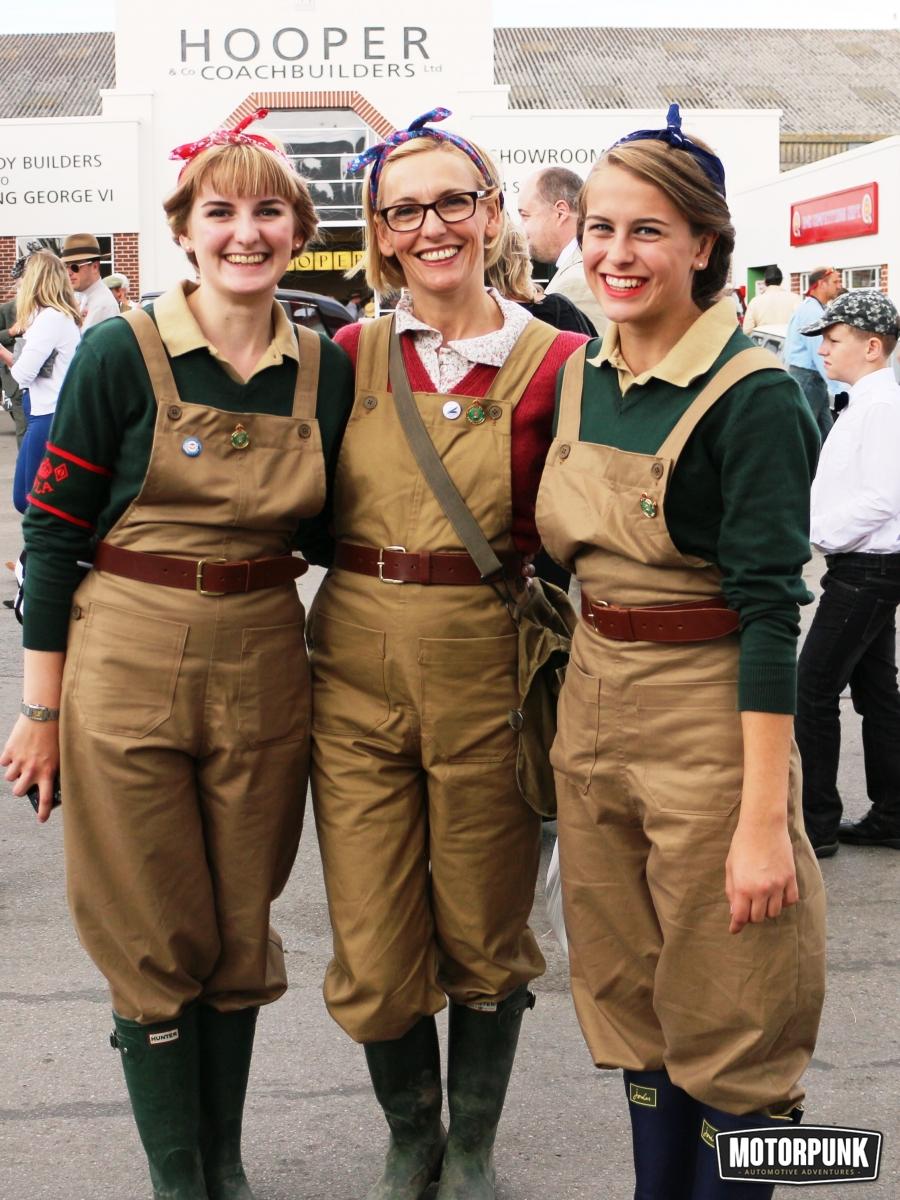 This is more like it. These two land girls look great and the addition of a Hurricane and RAF Land Rover complete the picture. The basket of apples and pitchfork for stabbing downed Luftwaffe pilots are nice touches. 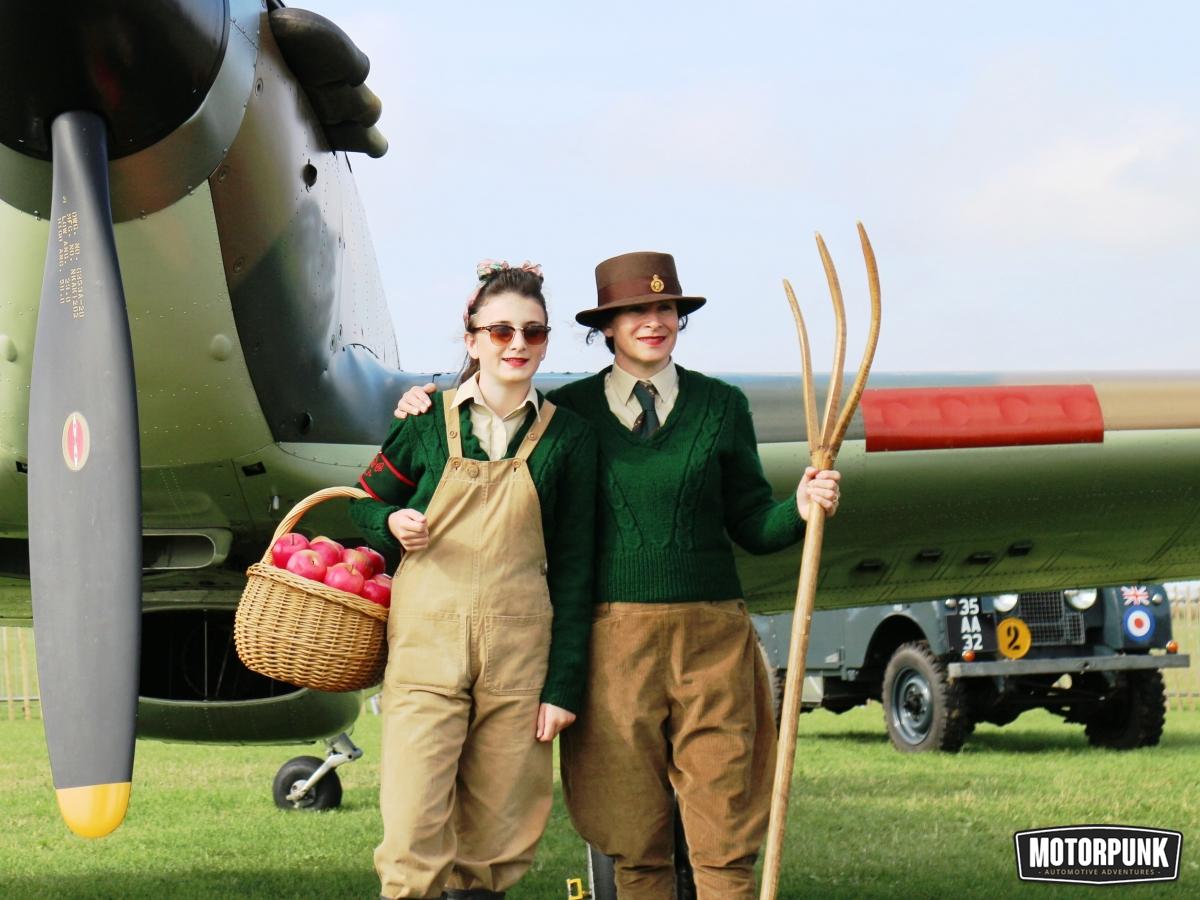 The Madame of the paddock

No, not that kind of Madam, note the discrete Rolex member’s lounge badge on her handbag as she waits for a mechanic with a sandwich to fix her Lotus, lounging in the paddock this is a classy Madame. Coordinated boots and scarf look good and even the plastic garden chair doesn’t diminish her killer smile. 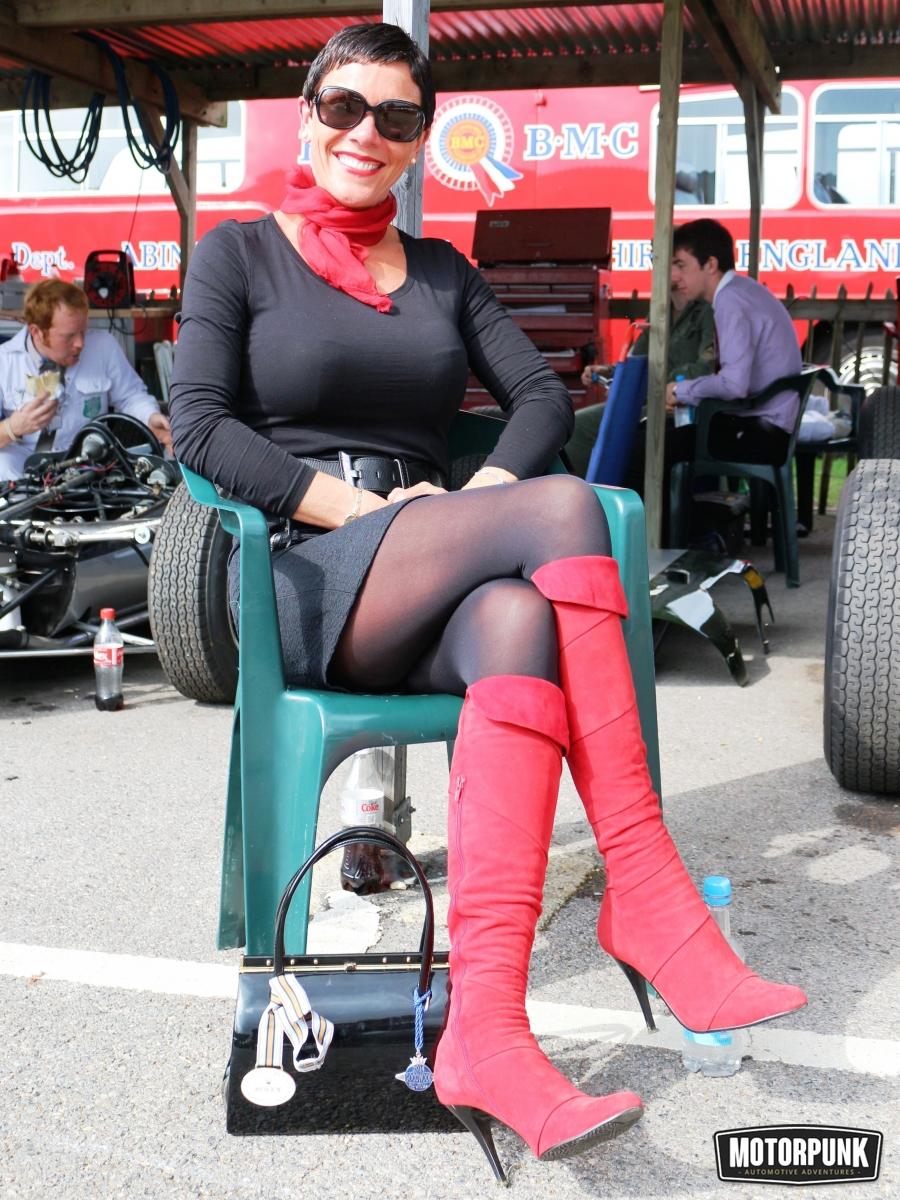 There are many variations on this look and generally the cleaner they are the less likely they are to handle a spanner in anger. This mechanic has sensibly brought a collapsible chair and waits at exactly the right spot at St Marys where so many drivers come unstuck. Flat caps work with anything. That’s a fashion fact. 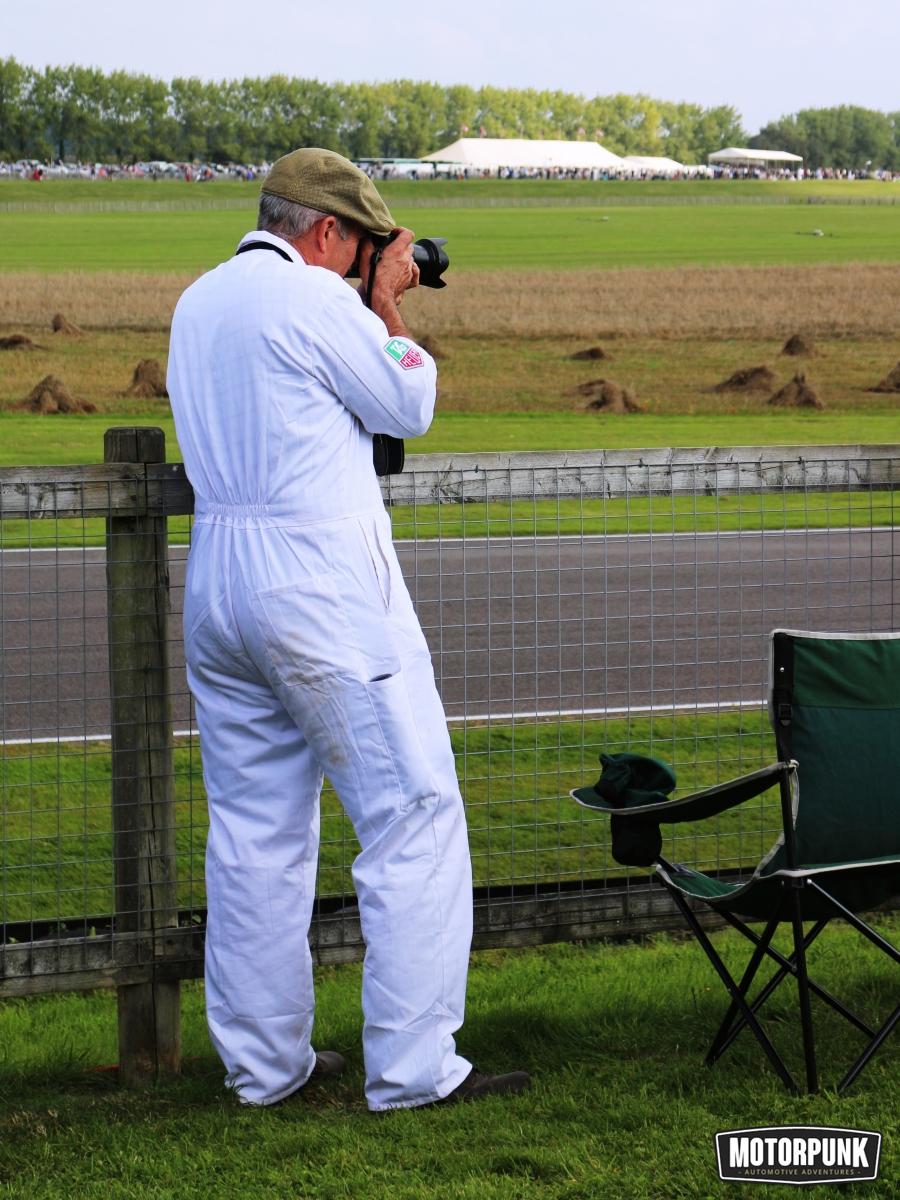 Stumbling around the pre-’73 car park is this lightly refreshed lady looking for her Morgan. She has had a long day watching the racing (and racers) and knows that when you’ve had to resort to drinking Prosecco from a Latte glass it’s time to go home. She might have lost her Morgan, and her nominated driver, but leaves with her dignity intact and looking stunning. 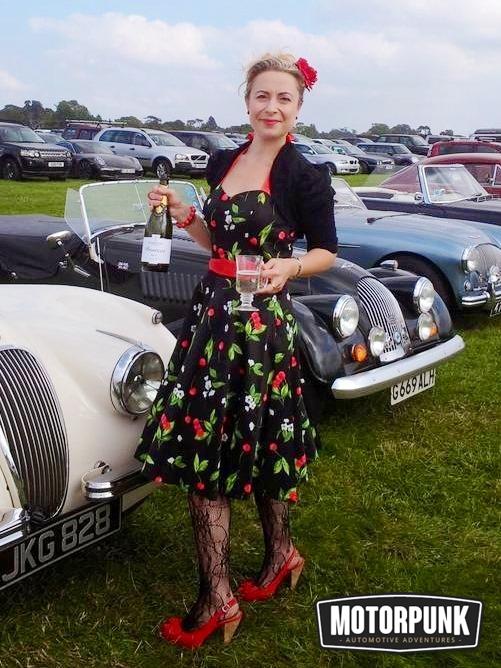 For the Revival many chaps grow interesting facial hair, some bounders just buy obvious stick-on stuff but this spritely chap’s ‘tache is all original. We didn’t get long to talk but his well-fitting uniform and original Mae West give us the impression that it’s not only his ‘tache that is original WW2 issue. He looks the type to have shot foreigners in anger. We like this look a lot. 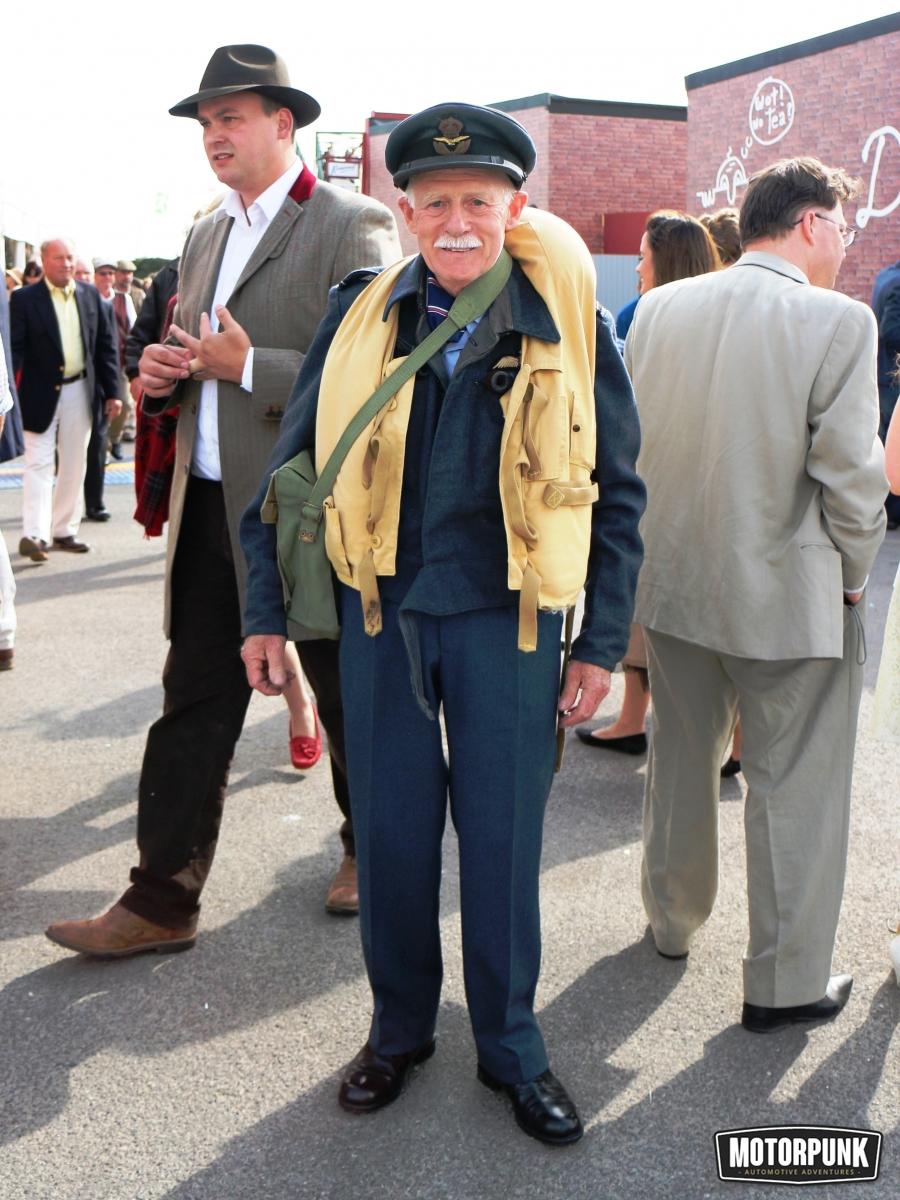 What is the collective noun for a group of Catholic priests? These bunch were correct in their vestments from Biretta to sandals and the Cardinal was most keen to show us his espiscopal ring. Almost certainly responsible for white smoke over the Vatican we’d like to know exactly what it is they’re smoking. Praise be. 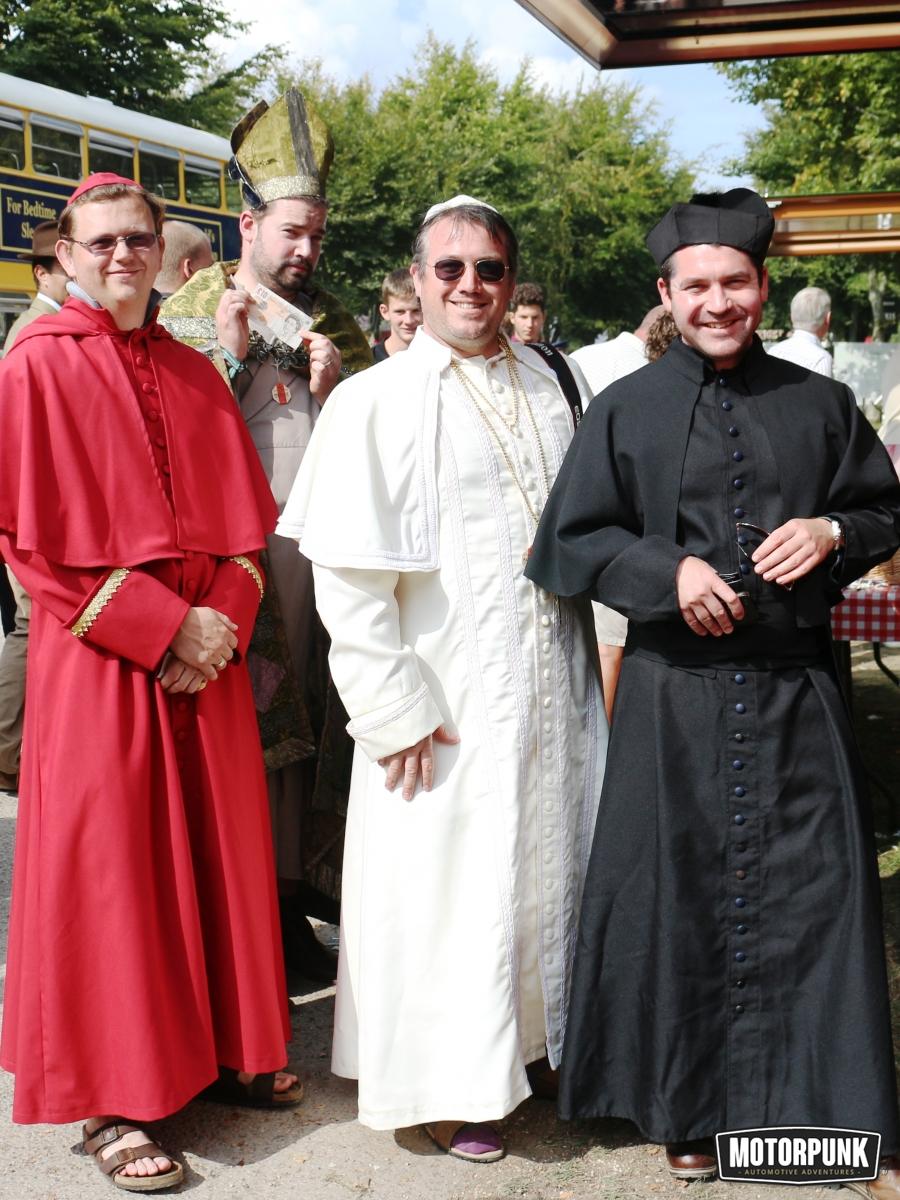 This young WAAF carried not a gas mask in her bag but programmes for sale, another member of staff at Goodwood making a tremendous effort with their outfit, how could you not buy a programme from a woman with such brilliant hair? 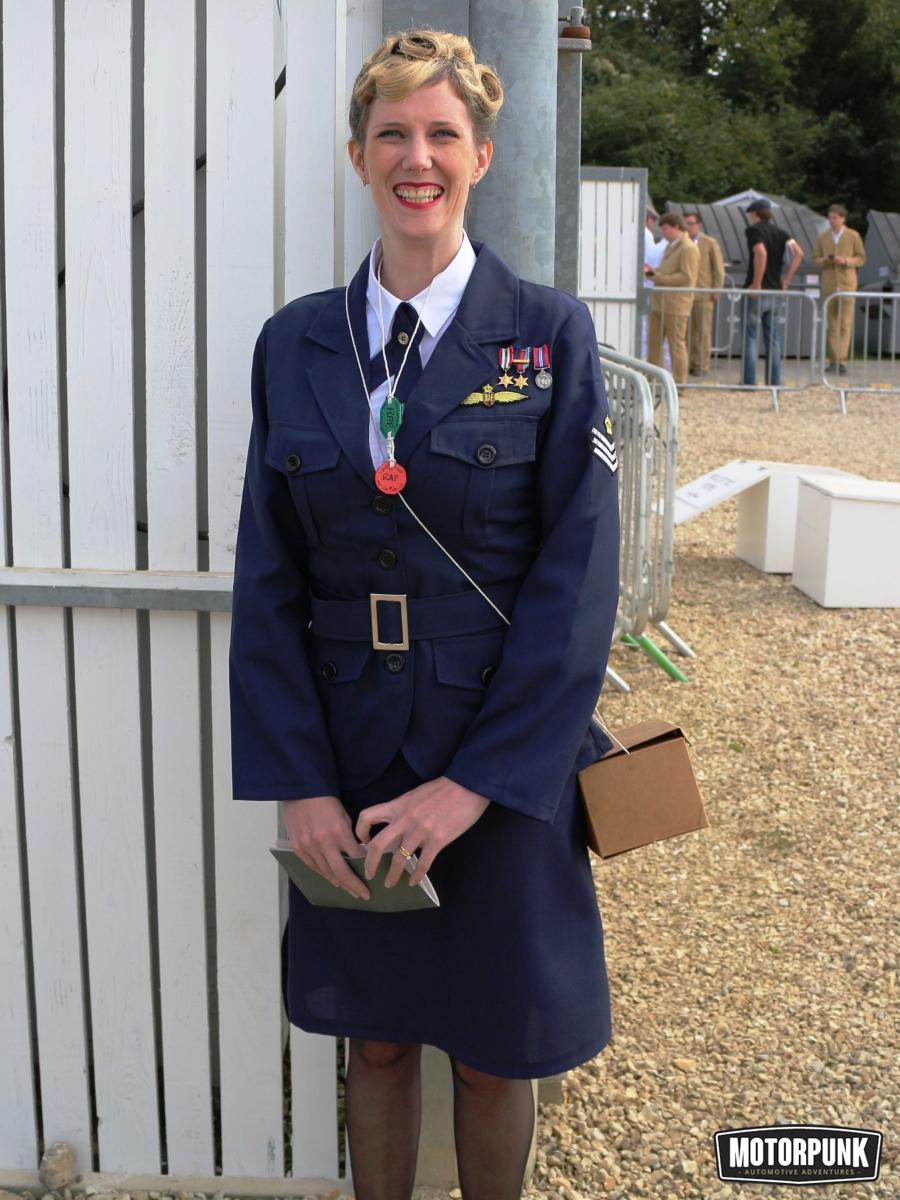 The Revivalists of the future

Are these two the coolest kids you’ve ever seen? The young lady rightly insisted on putting her gloves back on for the picture and the junior mechanic was clearly in his element amongst so many great cars. I’m sure their parents are proud, these are the Revivalists of the future. 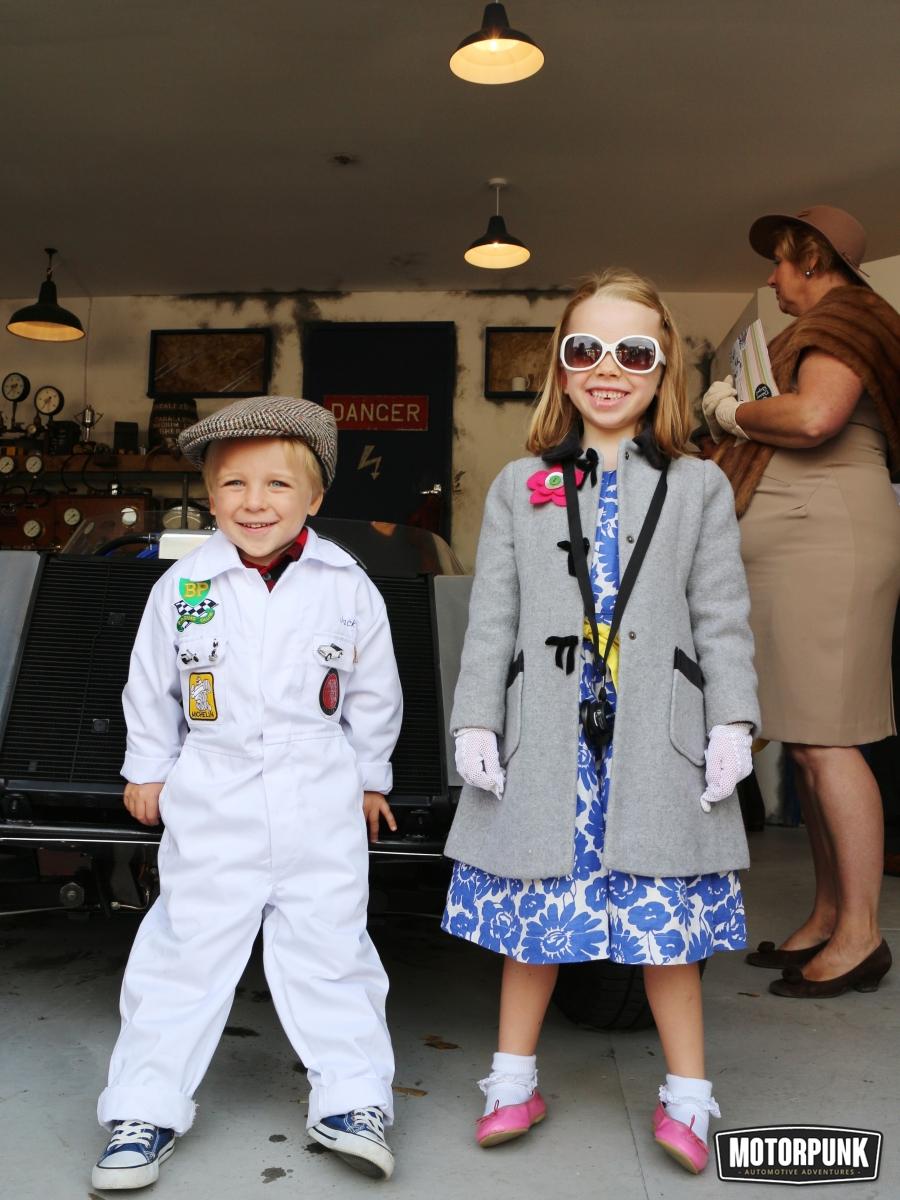 With lots of live music to enjoy it’s no surprise to see people dressing in period to match their favourite tunes. This rockabilly apologised for his non-vintage shades but there really was no need, he looks great down to his lime-green socks. 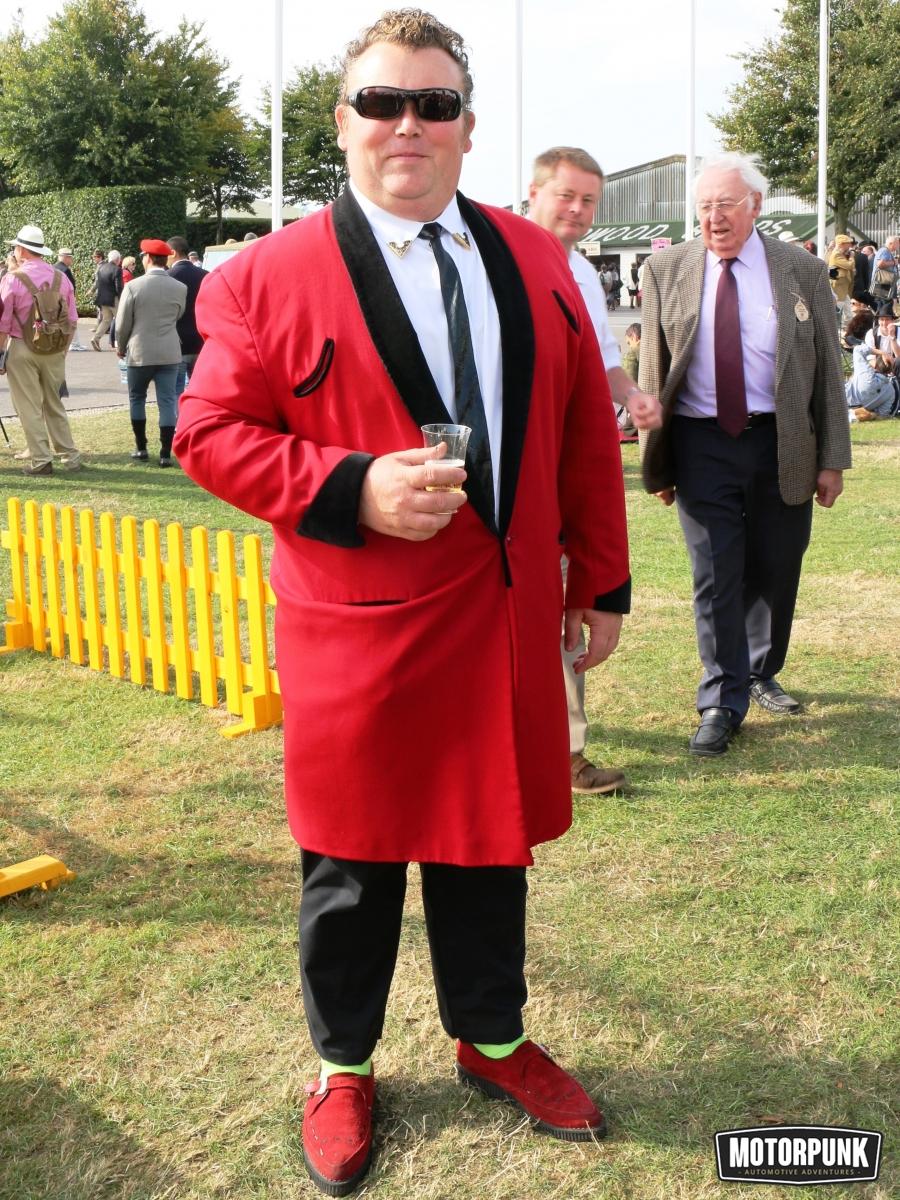 Lounging in the Veuve Cliquot grounds were the crew of Pan-Am flight something or other. Matching uniforms and badges give the impression that they’re experienced and professional aircrew but you can be sure that they’ve plundered the in-flight drinks service before they’ve even left the tarmac, and where is the fifth crew member and the pilot? 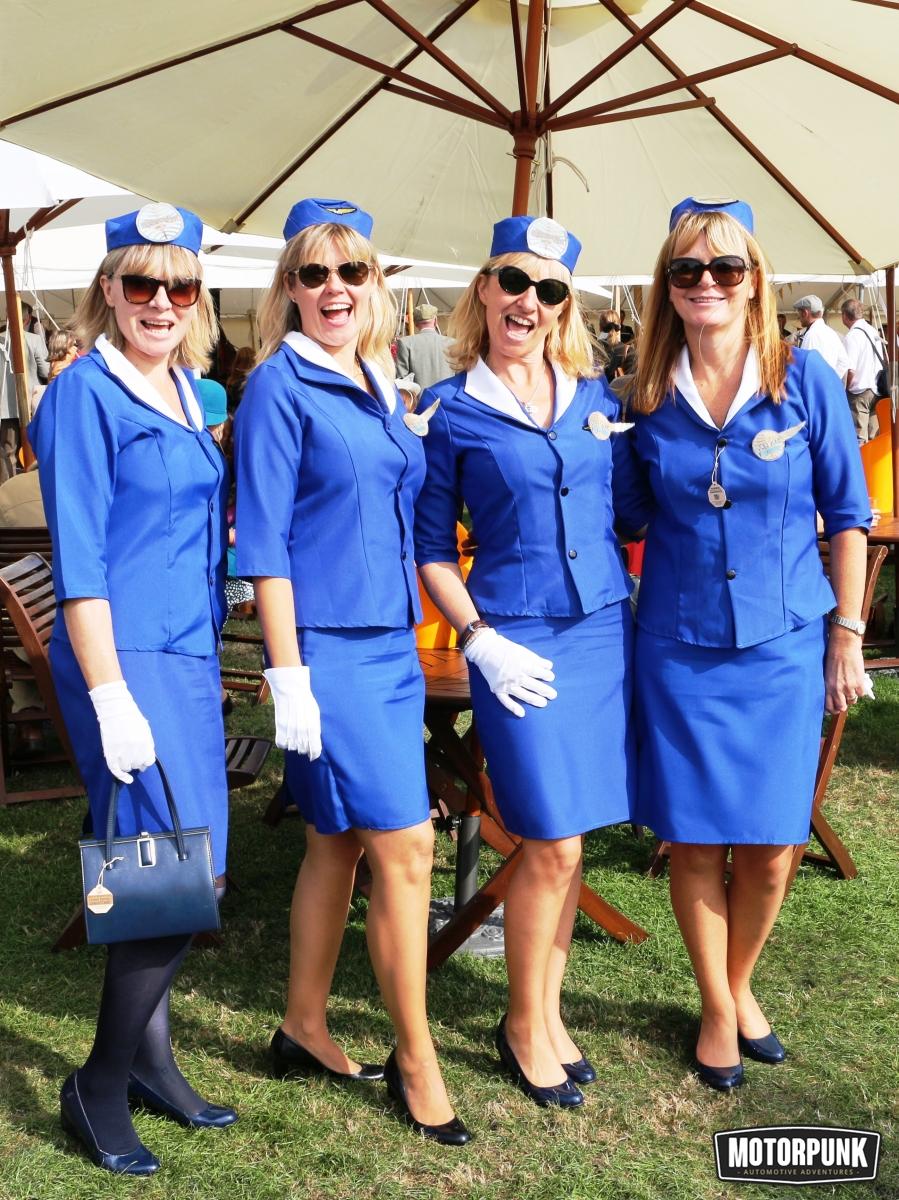 Thanks to everyone for being a good sport, see you there next year!