For some it’s the historic racing. Others come for the fashion, the aircraft or the action in the paddock. Maybe it’s the music or discovering a car you’d not seen before and developing the absolute conviction you ARE going to buy a Ford Falcon and race it to death here someday. We have forgotten what originally drew us MotorPunks to the wonders of the Goodwood Revival, but perhaps these snapshots of our favourite things from this years event will explain our utter infatuation. 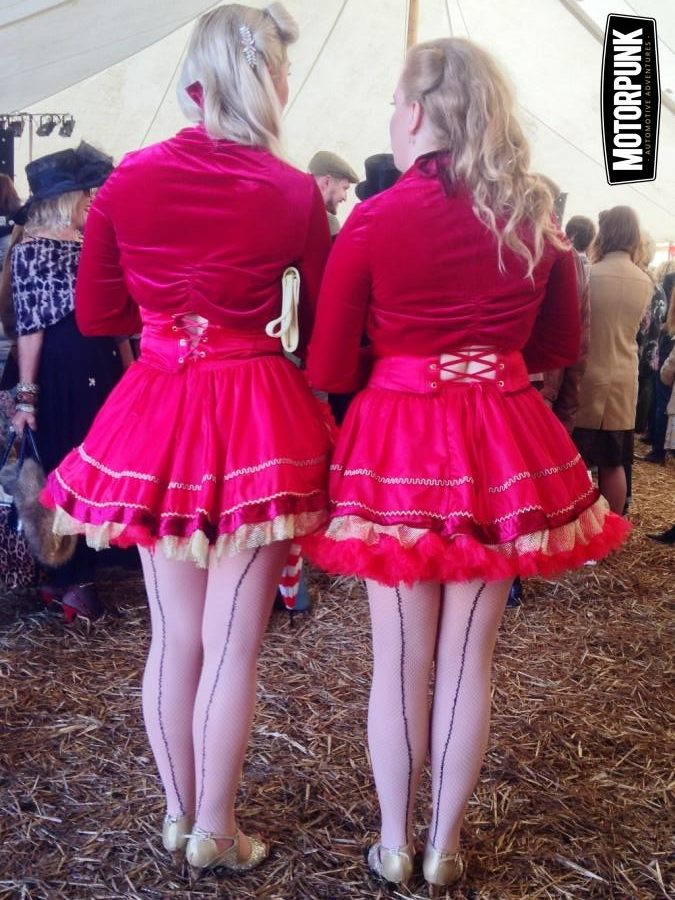 Doo-wop girls waiting to watch Mr B the Gentleman Rhymer (we’re still working on a co-production with our favourite chap-hop superstar, a remake of “see man driving a German whip” with the lyrics “see me driving a Hillman Minx”. 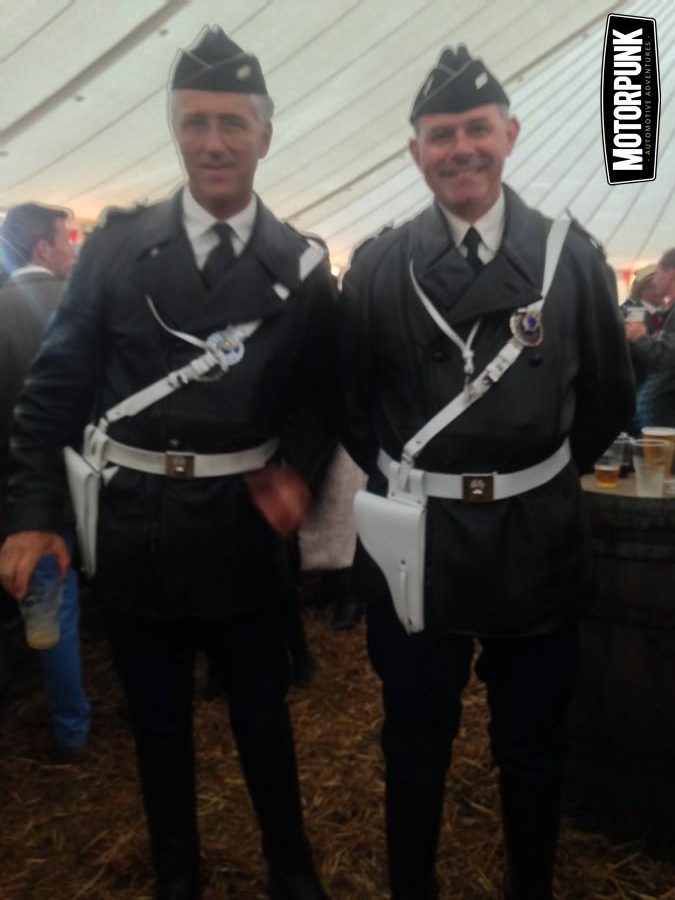 We’re not normally so happy to fraternise with the Gendermarie, but these chaps were genuine rozzers from abroad and in flawless vintage uniforms. The Revival attracts people from all over the world and we’re yet to meet anyone here we wouldn’t share a drinky with. I’d had a few when this picture was taken, as you can see. Shortly after this pic was taken they ‘playfully’ attempted to handcuff our Dr O. 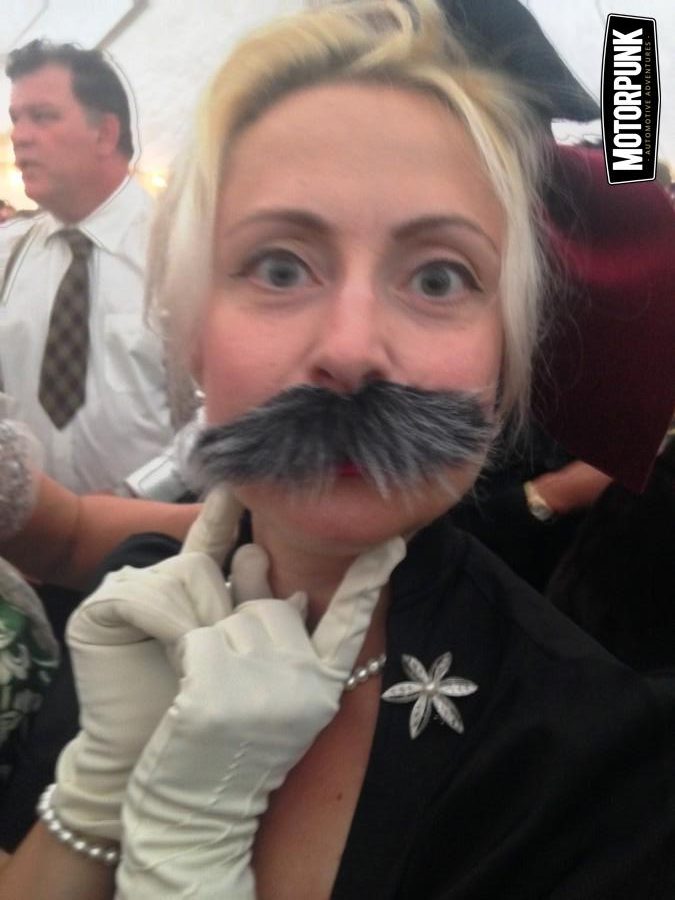 The Countess of Peef, looking everybit as lovely as the day I first clapped eyes on her, here at the Revival, albeit a smidgen hairier. 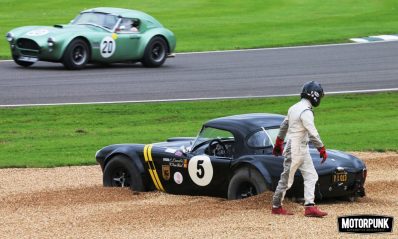 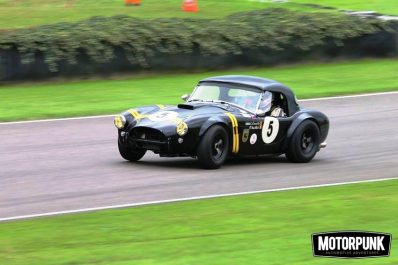 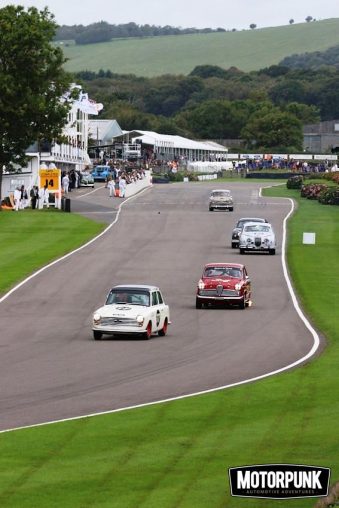 It is about the racing, of course. Watching the likes of Dickie Meaden and Chris Harris drive their classics hard (motoring Journos who can actually drive – whatever next?!) to spinning Cobras at Madgwick. We like to sit at St Marys, away from the crowds, where that little undulation in the corner catches out even the most experienced of racers. 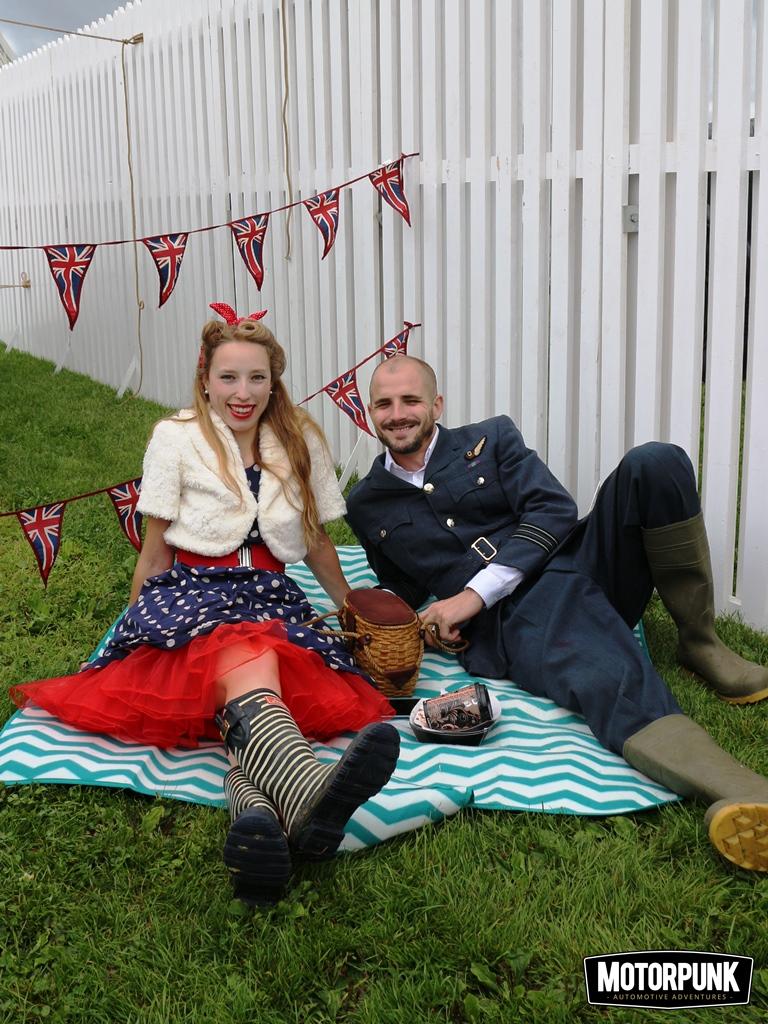 And to the paddock. This year Goodwood’s press team encouraged writers to tweet #RevivalStyle and I think these two nailed it perfectly. Picnic, smiles and wellies just in case it rains. Which it did, mightily, but they didn’t stop smiling. 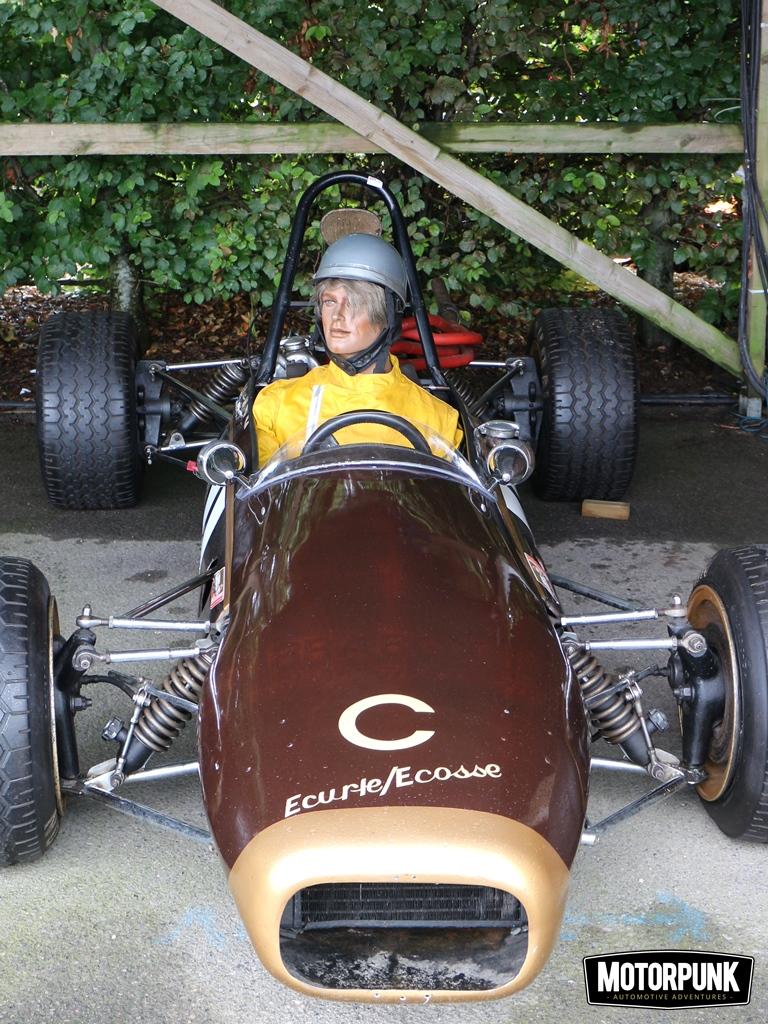 Looking like an embalmed James Hunt, someone in the paddock had a novel way of keeping unwanted spectators from jumping into the drivers seat by leaving this mannequin there. 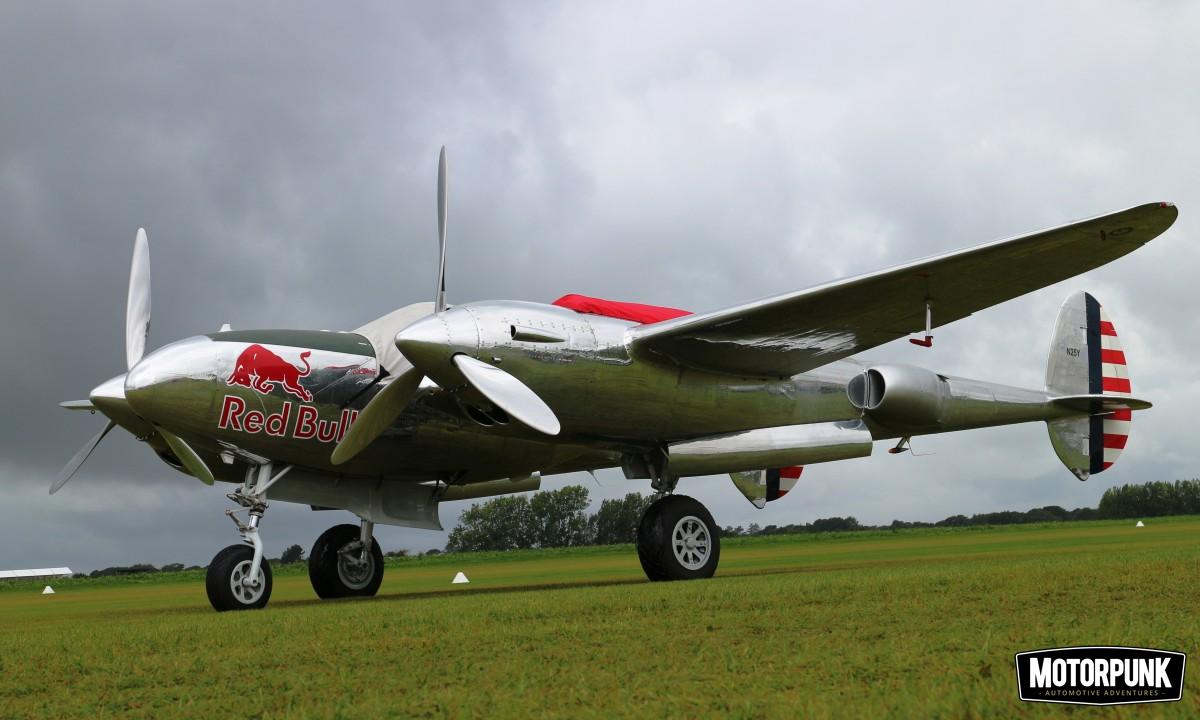 The wind put restraints on the action in the air this year, but this P38 Lightening really caught our eye. The Freddie March Spirit of Aviation event covers the flyboys on the airfield and watching the P51 Mustang and Spitfire swoop overhead in the early evening made the hair on my neck stand up. 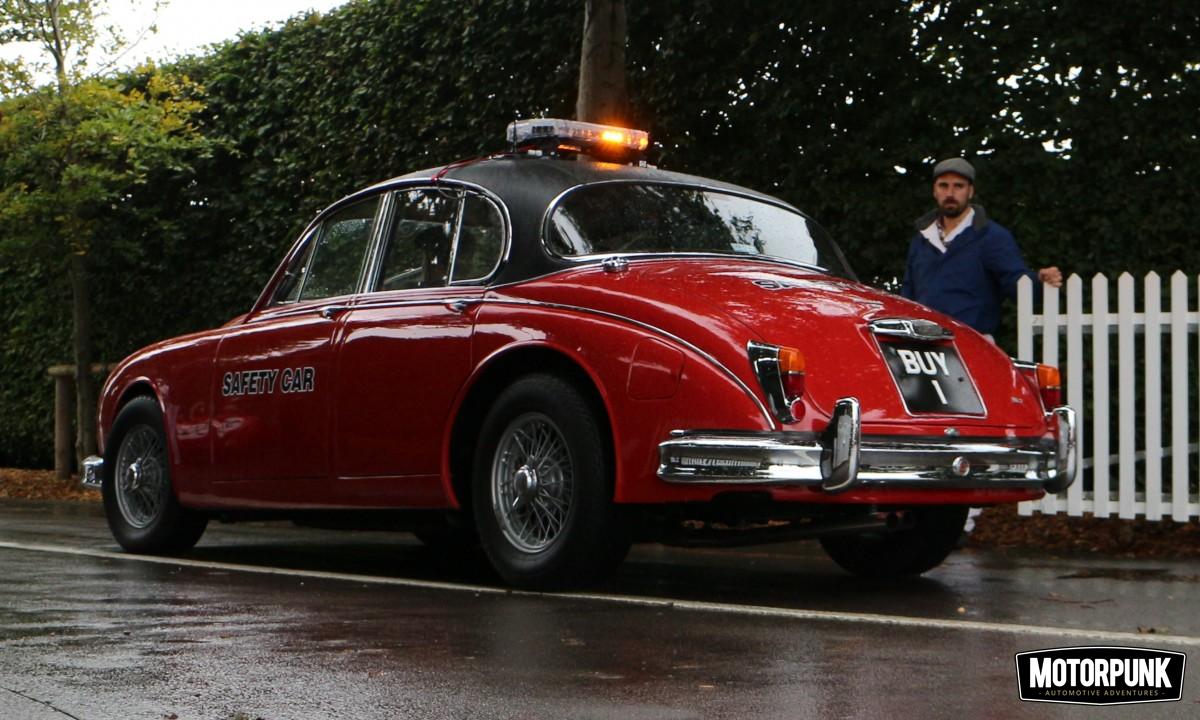 MK2 Jaguar safety car. One day we’ll write a feature on the fleet of cars that support the main event, overlooking the hideous white BMW X5 Doctors car, Goodwood also run classic Land Rovers and a fleet of retro EVs to help the day run smoothly. This safety car is worthy of better pics than I managed here. 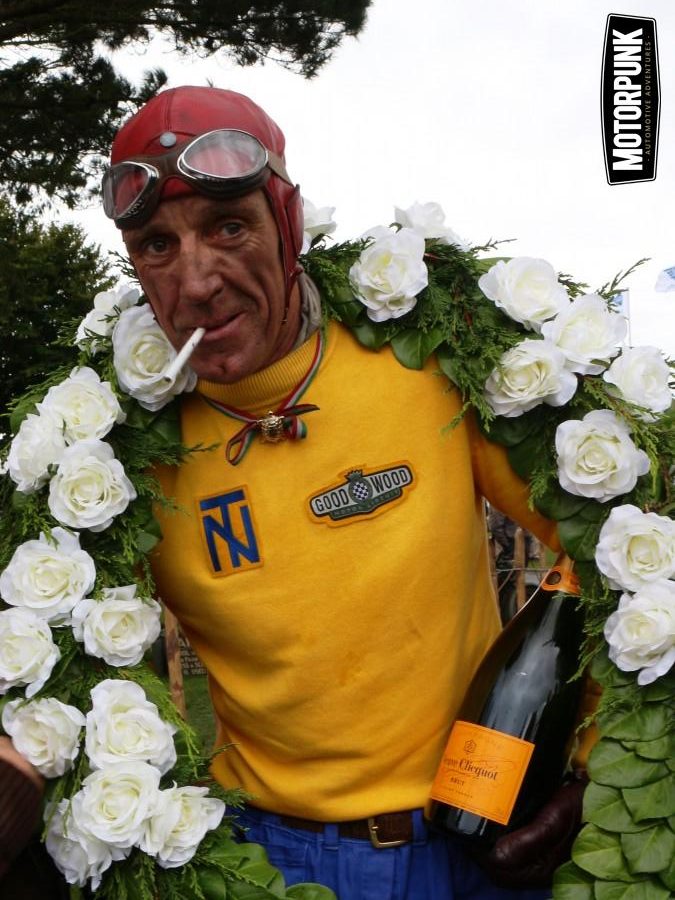 Tazio Nuvolari! Having previously photographed Graham Hill here, we were pleasantly surprised to spot another icon in the paddock. The greatest racing driver that ever was, or ever will be, said old man Porsche about this Italian. Actually, this Italian had a suspiciously English accent. In any case, Bravo for the effort! 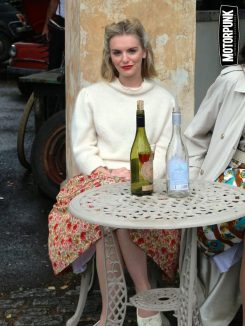 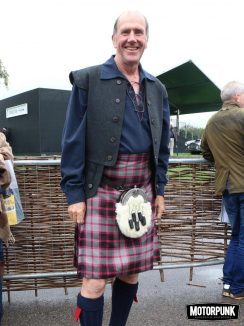 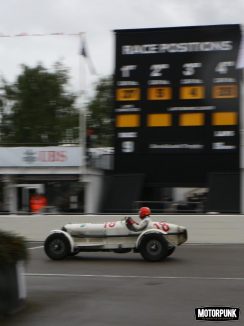 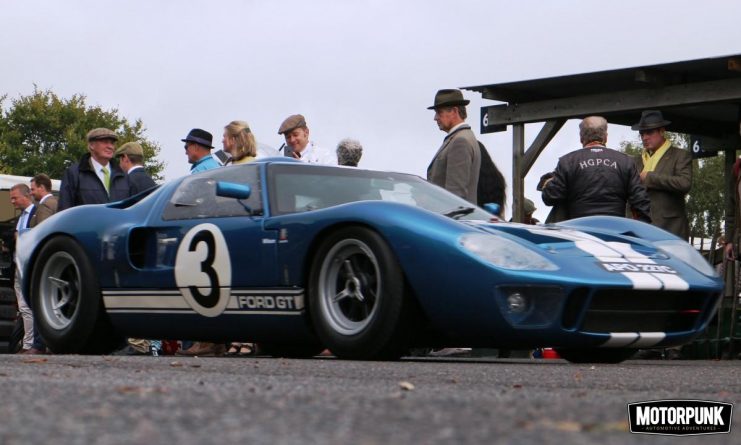 Back to the paddock. A Ford GT40 and a proper Scotsman, oblivious to the mizzle that now persisted, and more action on track and trackside where the blonde slugged red outside the Fiat 500 garages. 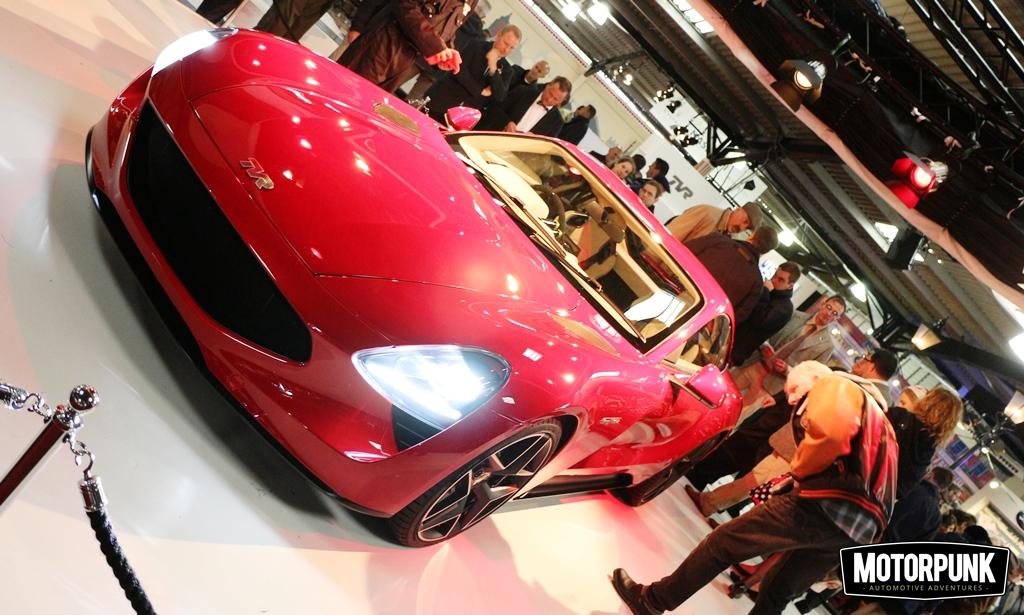 You’ll probably seen this all over the internet by now, but we got a close look at the newly launched TVR at the show. Aside from a hint of mismatched paint, the car looked very, very good. We understand there are c.100 revisions to be made before this prototype will make production and wish them the best of luck. They were overrun on the day and taking lots of orders. Will they make a success of it? 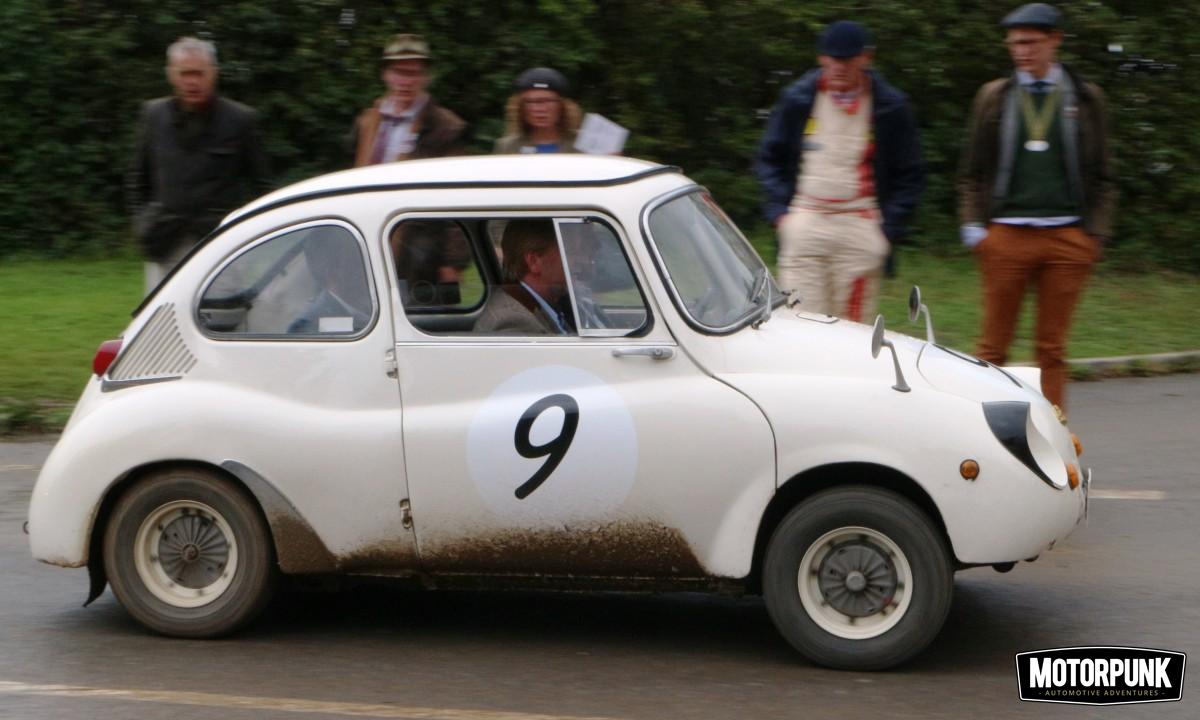 Outside; this. A Subaru something. Ugly, cool and slightly demented. I love spotting oddities here at Goodwood. The carparks alone, boggy as they were, were packed with similar classics and almost worth the entry fee alone. 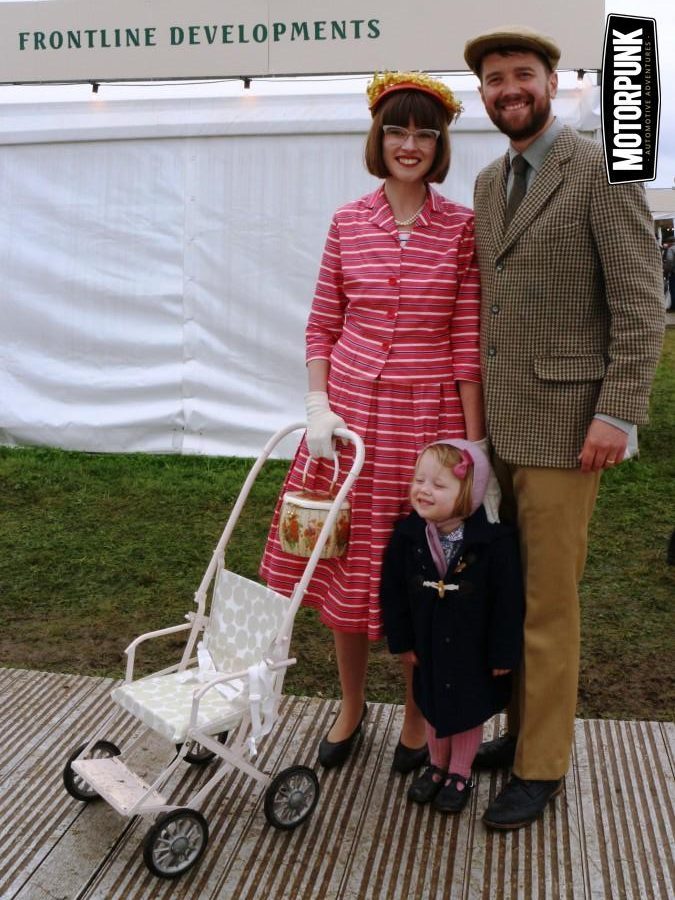 What a handsome family. Only after taking this shot did I realise that I photographed the same lady previously, when the toddler pictured here was but a dot! Here’s the original pic from two years ago. 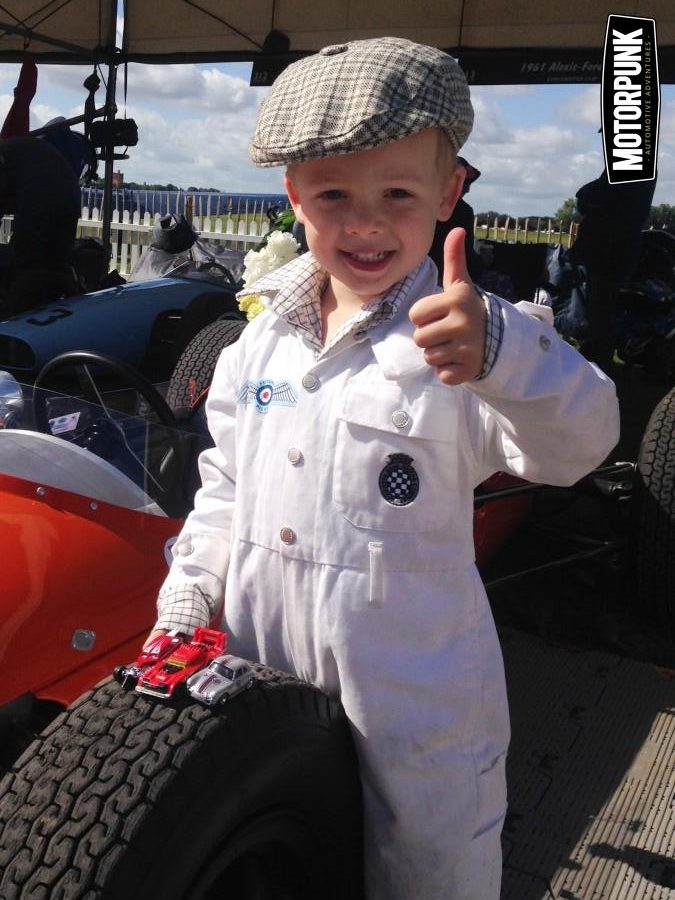 Dad had just won, he had his favourite toy cars on display, and people were queuing up to snap this young man who looked thoroughly pleased with the day. 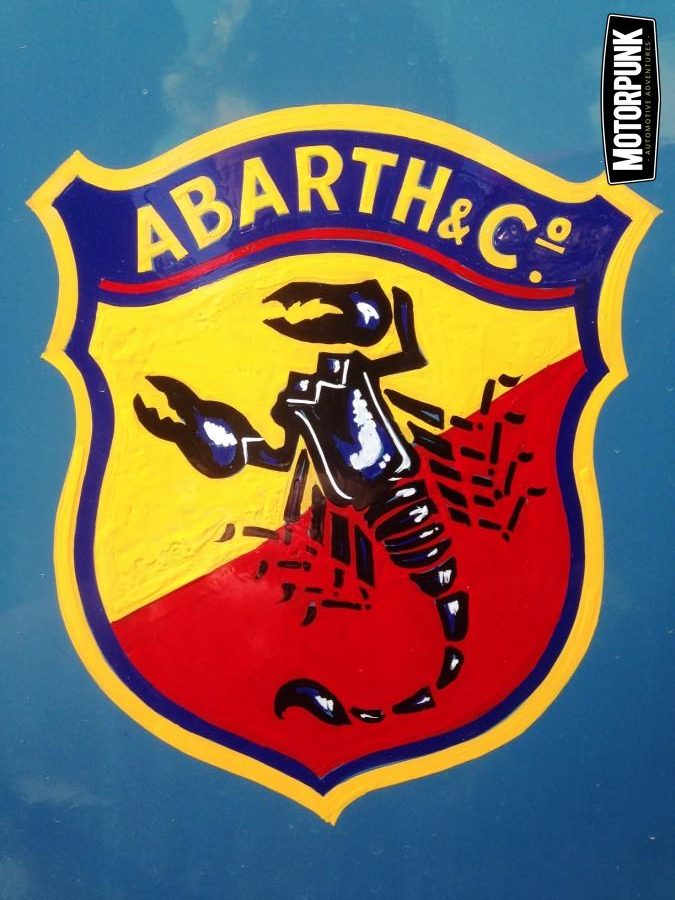 Back to the Italians. This hand-painted Abarth badge caught our eye, some cars wear stickers but it seems right that sufficient attention to detail is used when badging these cars that paint (and craftsmanship) is employed. More on traditional signwriting (my Dads profession) here. 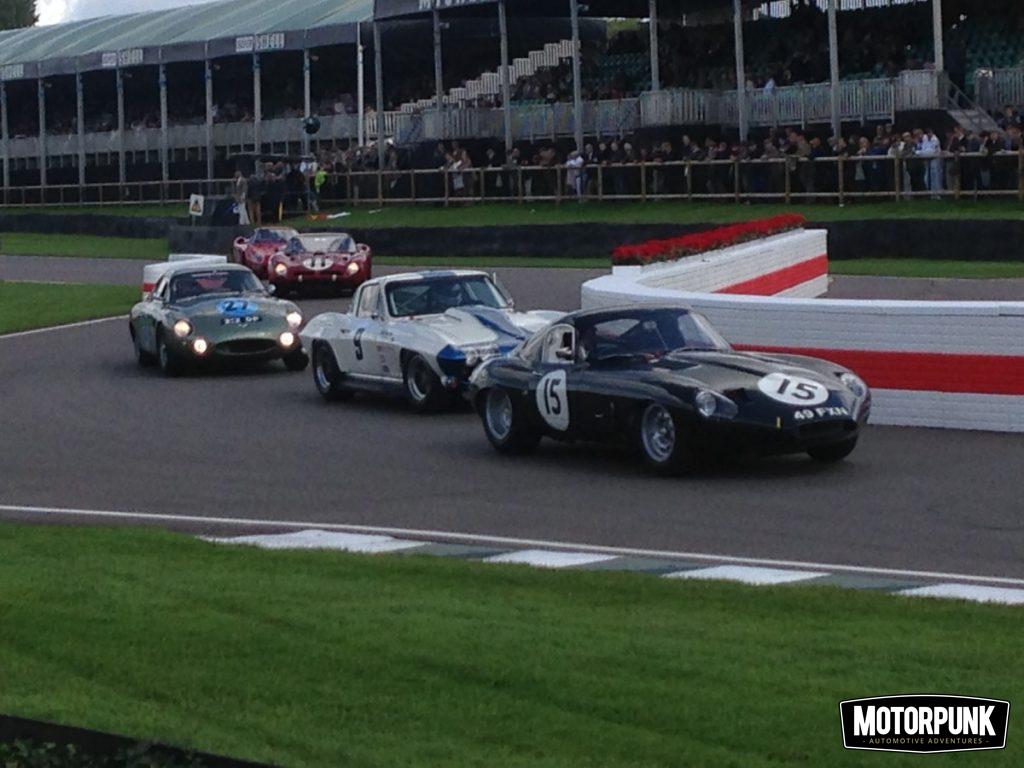 Racing runs all day. This is a dismal iPhone snap but one day is not enough here, the action is constant, and a glance at the track shows action like this. 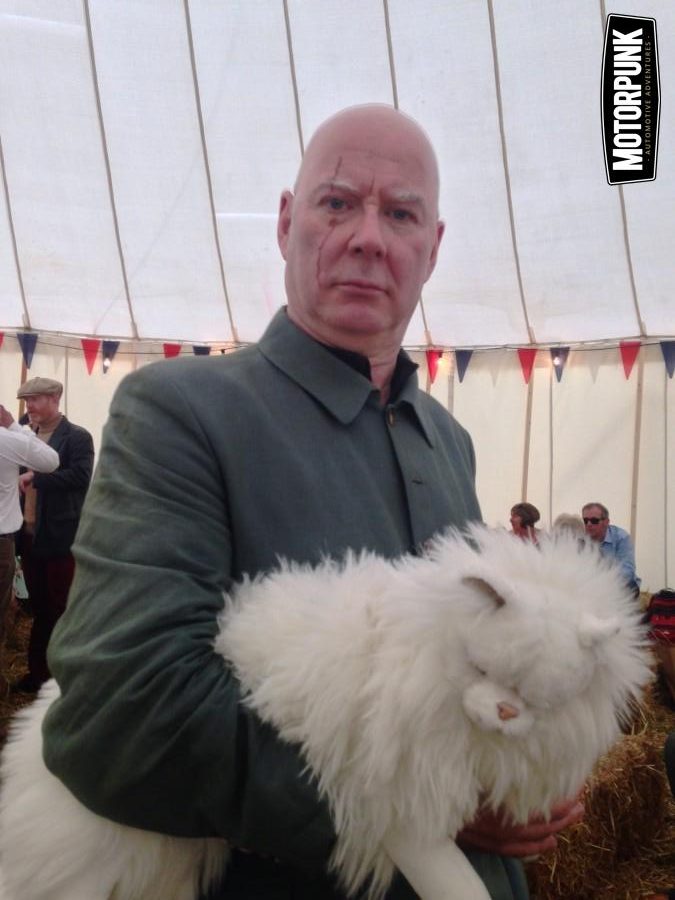 Blofeld! The best dressed at the Revival, for us, was this chap who looked as at home here as he would in a hollowed out volcano plotting world domination. We had a great chat about his ten classic cars over a few beers, not something you’d expect from a criminal mastermind. 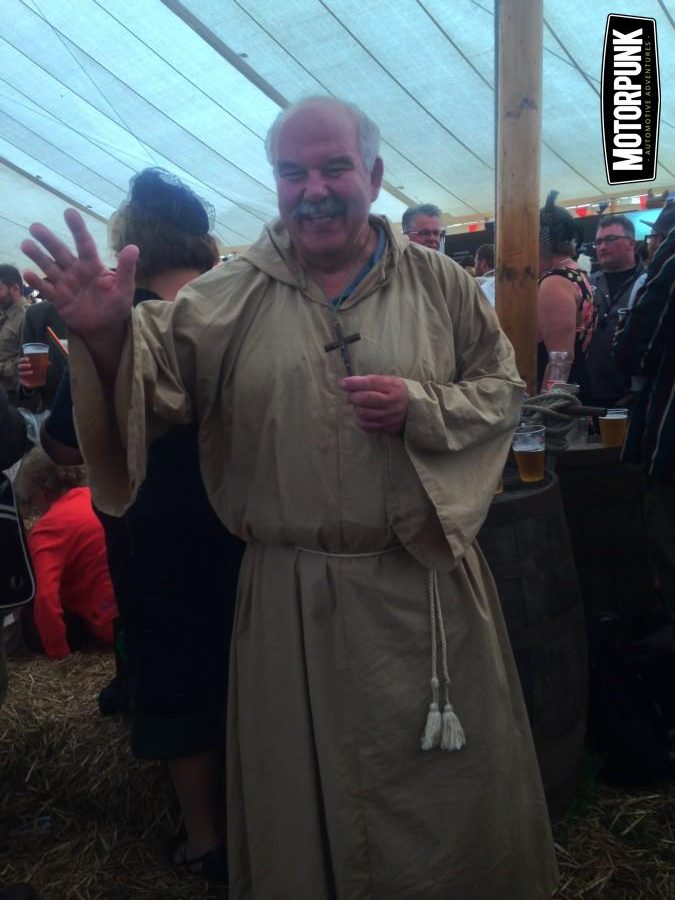 The Revival is supposed to be a reflection of 1950s Britain. Photographed from a safe distance, this mad Monk would have been just as happy in the 1500s. Or a choirboy. 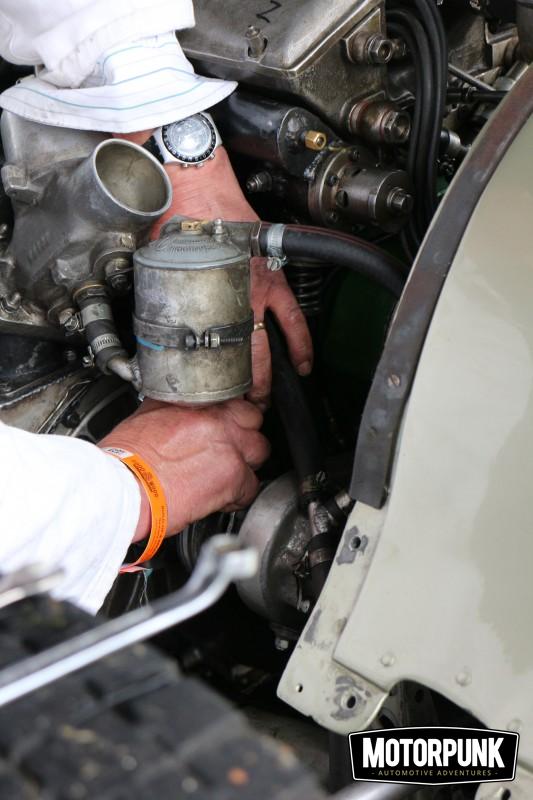 The mechanics do not get the coverage they deserve, and, languishing at the bottom of this feature, perhaps I should give them more credit for their contribution to the day. Where else could you see a supercharger for an ERA being fettled, and get time to learn about the marque from the man with the spanners? It was fascinating to see. Our friend Horsfall was an ERA driver too, it seems they’ve not become any more reliable in the decades since it was first built, but that makes you root for the marque even more out on track.

Thanks for reading. The 2018 Revival will be the twentieth and we expect a similarly spectacular event. We hope we shall see you there!