In the late 1980s there was no bigger thrill for the fledgling petrolhead than a trip to the local amusement arcade with your Tacchini tracksuit pockets bulging with old-fashioned 10p pieces. However, unless you’re a chap of a certain age then you probably aren’t gonna appreciate this nostalgic look back at Sega’s game-changing driving simulator; but trust me, in 1986 when Japanese game designer Yu Suzuki released Sega’s OutRun, it marked a total revolution in graphics and game play to become one of the most popular arcade games, ever.

Although the blocky graphics somewhat disguised the car’s ‘prancing horse’ boot badge, OutRun’s hero-car was blatently based on the 1984 Type F110 Testarossa (predictably, there followed a huge copyright battle between Sega and Enzo’s lawyers over this). OutRun was exciting because, as far as I can remember, it was the first arcade machine to use in-car perspective; previous driving games had used a rather detached birds-eye view, but now you really felt like you were in the thick of this primary-coloured supercar hoonery, dicing it with twitchy 911, trundling pickups and lane-switching artics.

The strapline on the cabinet read “you’re cool, the engine’s hot, the girl’s gorgeous, you’ve a tank full of gas and the open road … the rest is up to you.” There was no lapping circuits, no missions, no opponents, no gratuitous drive-by shootings; you just got in, chose your own route and blasted through the rolling landscapes to try and reach checkpoints by the cut off times. 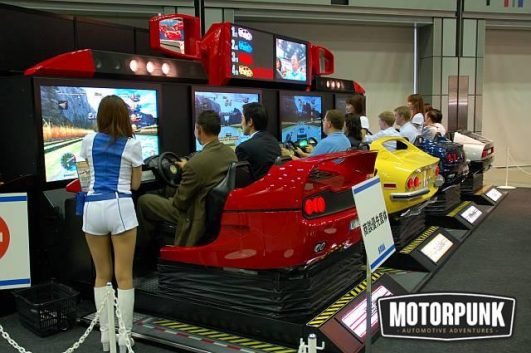 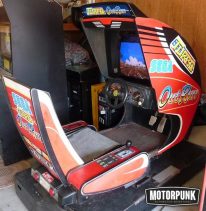 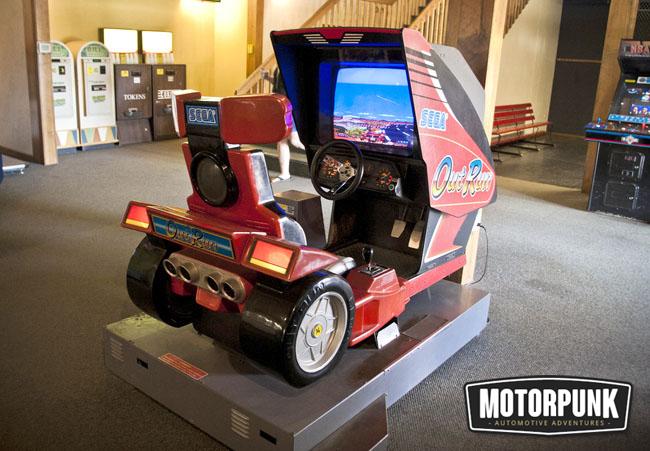 You could, on the de-lux versions, actually sit in the plastic Faux-rarri and get buffeted through the twisties by clunky hydraulic rams while stereo jazz-fusion blasted through the headrests from three switchable radio stations (yes GTA fans, this was happening in 1986!). Magical Sound Shower, Splash Wave and Passing Breeze were OutRun’s trademark soundtracks, composed by Suzuki himself as devote of 70s jazz funk, Gloria Estefan and the Miami Sound Machine. Even the final Game Over/High Score screen had a soothing Last Wave composition designed to bring your pulse rate down as you watched the digitized sunset and surf breaking on the beach. OutRun was awesome.

OutRun’s ground breaking ‘super scaler’ graphics, funky soundtracks, open gameplay and moving cabinets earned Sega a clutch of industry awards and over 20,000 arcade machines were built to meet demand. Sadly, few of them have survived, as things like this have to survive a generation of neglect and ridicule before they become retro-cool!

Although there were lots of updates, including OutRun Turbo and even a super hi-tech four-player-link version, demand for working original 80s arcade models is now booming as men of a certain age are snapping them up as centrepieces for their high-end man caverns. A few years ago you could get a working stand up version for less than a monkey; today, restored sit-down OutRun cabinets can fetch upwards of £4k. Can’t afford that? Me neither. Never mind, let’s console ourselves with a blast from the past and medley of Suzuki’s Latin jazz fusion shall we? Click the link below.