There’s much more of a stigma around drink-driving these days, and rightly so. Nevertheless, around 15% of fatalities that occur on Britain’s roads still involve motorists that are under the influence of alcohol. Nowadays, if you have any since, an unplanned bender means leaving your P&J abandoned overnight in the car park of your local. But how will you retrieve the car? While you might be a PE fan, the last thing you want to do with a stinking gin hangover is jog to the boozer – what if it were more than a mile away for heaven’s sake?

However, we at Motorpunk think we have the answer with this range of collapsible mopeds that can be ridden to the inn and then popped in the boot of your motor … once the waves of nausea and self-loathing have subsided to a sensible level, that i.

FOR THE NEW GENERATION…

Firstly, we have BOXX Corps’ two-wheeled electric transportation device. If Imperial Stormtroopers had designed the Trunki ride-on suitcase then it would probably have looked like this. Measuring just a metre square the Boxx has a low centre of gravity and clever AWD with ABS. Although, as a moped, top speed is limited to 30mph, with upgraded power packs it has a potential range of 120 miles and can be fast-charged in one hour. Since it contains no fluids Boxx reckon their compact machine could be stored in the cloakroom of the most bijou urban pads. 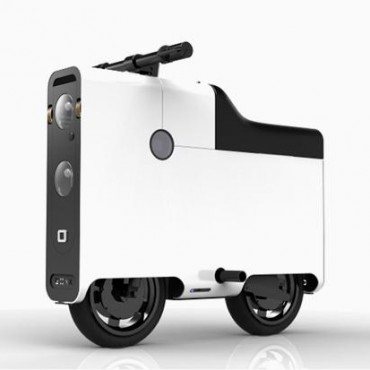 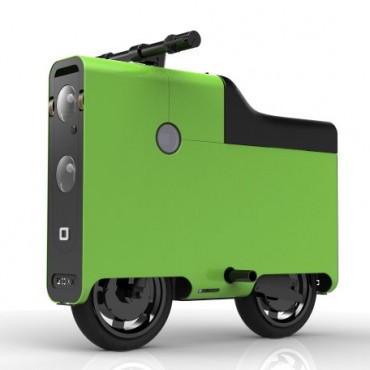 In any case, since it costs $3797, before upgrades, it’s not the kind of thing you’re likely to see lashed to a tree with a rusty Halfords bike lock. Ideal for retrieving your Avantador from a swanky West End wine bar.

The granddaddy of all compact mopeds must be the Excelsior Welbike.
This British single-seat machine was devised during WWII at Station IX for use by the Special Operations Executive, and is the smallest motorcycle ever used by British Armed Forces.

Between 1942 and 1943 nearly 3,700 units were built and many saw action with the 6th Airborne Division at Arnhem during Operation Market Garden. They were dropped with the paratroopers in special impact resistant canisters and could be assembled and started in just 15 seconds. Powered by a Villiers 98cc single-cylinder two-stroke engine, a fully fuelled Welbike could cover a respectable 90 miles at 30mph. However, many of these little bikes tended to go AWOL as soon as they were delivered to the RAF as the fly-boys found them handy for pottering around the airfields. 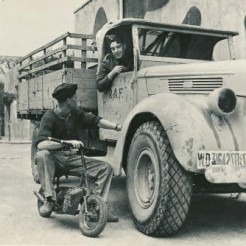 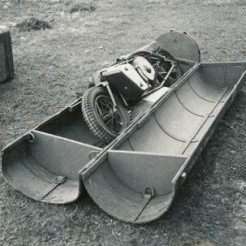 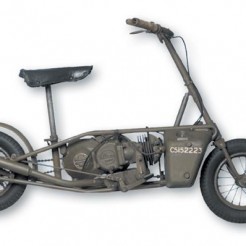 With no front brake, lights or horn these highly collectable war relics are not strictly road legal, but could still be useful on a cross-country mission to recover your ratty ex-MOD Defender from a rural Free House car park. Roughly 300 Welbikes are thought to have survived; if you want your own hand-built replica, fabricated by craftsmen at the modern-day Welbike Company, it will cost you around £4,500.

FOR THE BANZAI BOOZEHOUND…

Over thirty years ago the clever engineers at Honda had already solved the dreaded car recovery conundrum. After a heavy session on the sake and Sapporo the (now sober) Japanese gentleman could assemble his 50cc Motocompo “Trunk Bike” safe in the knowledge that when he was reunited with his Honda City, outside his local karaoke bar, the scooter would neatly collapse to a perfectly fit in the subcompact’s boot. 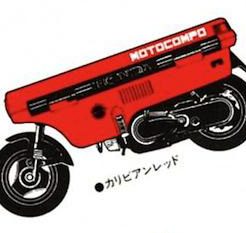 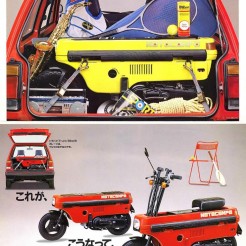 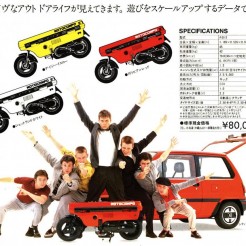 The Honda City was actually designed around the Lilliputian scooter which weighed only 92.5lbs and could return over 100mpg. In the early ‘80s Nutty Boy ska band, Madness (below), were given several sacks of Yen to knock out some pretty dreadful ads for this traffic-busting car/bike combo; in all, over 53,369 Motocompos were sold between 1981 and 1983. These bikes still crop up for sale from time to time, priced from £700 for fixer-uppers, to £3,000 for a MIB collector’s piece. With nearly 3bhp and a 110mile range the Motocompo is ideal for recovering … anything other than that damn fugly Honda City.