Back in July we had a cracking Kit Bag feature on Monkey Bikes; these were compact machines that responsible motorists might use to retrieve their abandoned motors from the car parks of their favourite watering holes after a heavy night on the pop. In recent weeks, we’ve also been lucky enough to have a play with Morgan’s brilliant open-cockpit three wheeler, so we thought it might be about time to look at some of the more interesting helmets on sale for all you style-conscious chaps and gals out there.

By the way, if you’re a proper racing driver, not just a tweed-clad blagger like what we are, then we’re not actually suggesting that any of these will cut much sway with the FIA scrutineers at your next track meet. Today’s Kit Bag priority is sheer sartorial elegance; in our experience, crashing has never been a strong look anyhow.

The 80 year-old monochrome narcissist, Karl Lagerfeld, designed this limited edition tweed iPod-helmet for the world’s most expensive maker of biking gear: Ateliers Ruby. Totally impractical for our damp little island, and, with its integral iPod pocket, ruddy dangerous too – although I ‘spose you could use it for snuff, prophylactics or even a small hip flask. Lagerfeld famously once said, “I like to do things quickly because I’m easily bored”; that’s not the catchiest strapline from someone branching out into safety equipment. However, this is MotorPunk, and this is a crash helmet covered in tweed, so it’s in.

The TORC T-50 helmet range has dozens of classic open-face designs with a weathered sign-written retro look. This one is my personal favourite; it’d look great aboard your ratty cafe racer as you snarl into the rear-view mirror of some middle-lane-hogging twerp – a similar principal is employed on Mitsubishi’s Lancer 2000 Turbo as featured in this month’s CarClub 18-30. The T-50 motorcycle helmet also comes with a removable ultra-suede liner, is American DOT approved and has a clip-on sun visor.

Lambretta Union Helmet – A skid lid for the Brit kid

The ‘Union’ uses the iconic Mod symbol, and pays tribute to Britain’s special relationship with the Lambretta scooter. It is based on an old shell first produced in the early 1970s and this design features alongside some other funky Anglo-Italian beauties. All helmets come with an eco leather lining and a quick release chinstrap in case you need to swiftly demount and duff up some Rockers that might have “looked at you a bit funny.”

Kazakhstan’s Good! advertising agency’s decision in 2010 to inspire their creative team by doing something out of the advertising box attracted a lot of attention from the motorcycling fraternity. The design brief was to reinvent various round shaped objects into bikers’ helmets, and they did it brilliantly. As you can see here we have skid lids shaped like globes, bald men’s heads, brains, bums, lady-jugs and more. The crazy thing is that nobody has put these into production, despite these images going viral when they were dreamt up nearly three years ago. However, five minutes Googleing will probably find you a local air-brush artist that could knock up your own unique version … and before you ask, yes, a testicle would be in poor taste. 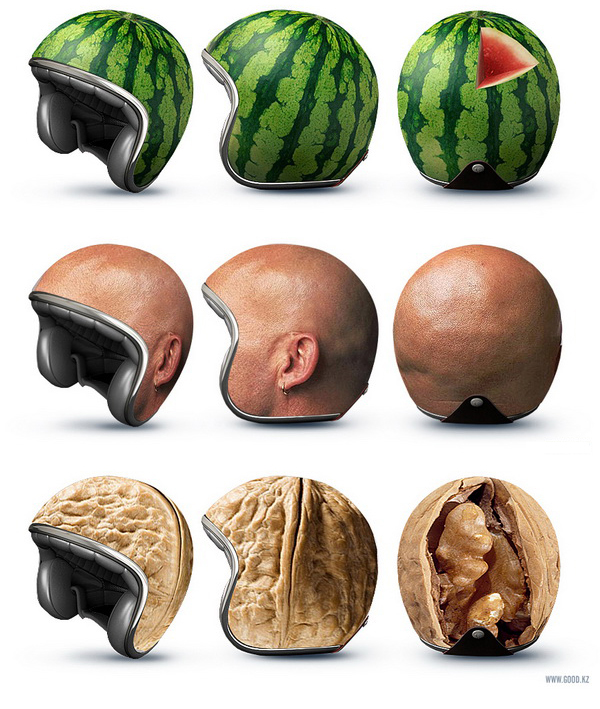 As regular readers of MotorPunk might remember Dr Octane quite fancied himself as a potential fighter pilot – if it hadn’t been for his ‘dicky ticker’, fear of heights and rampant cowardice then he still thinks he might have made Top Gun … had the RAF ever had such a thing. If you’re also a deluded wannabe fly-boy, that’s been grounded with a L-plated Honda like our good Dr O, then you won’t do much better than this Euro crash-test approved bikers’ helmet … especially if, like us, your look is more MiG than Stig.