There was a time when every chap would, by force of habit, pat down his tweeds as he left his home just to check he was carrying his necessary accoutrements for the day; only when his wallet, pipe, car keys and trusty penknife were safely stowed away would he be ready to stride out to tackle an honest day’s work.
The affectionately British term ‘penknife’ dates from the 6th century when a short sharp blade was needed to ‘dress’ quill pens. However, folding pocket knives were carried by nearly every Roman foot soldier and are thought to have been around since the Iron Age.

If you’ve got the mental stamina to reach paragraph three of this feature, then, as far as we’re concerned, you’ve passed the intelligence test and earned the right to carry a penknife without fear of harassment by the Rozzers. Just as long as your blade is less than three inches long, and you don’t start brandishing it at every discourteous motorist who cuts you up on your morning commute, you will be fine legally.

In MotorPunk’s kit bag today we have a wide selection of charming and unusual penknives that should meet the needs of the most discerning modern gentlemen.

Originally sold as a simple working man’s knife, the Opinel has become an iconic symbol of French culture and rural lifestyle. Pablo Picasso used an Opinel to carve his sculptures, while Roger Frison-Roche, the Savoyard alpine guide and mountaineer, never made an ascent without an Opinel stowed in his knapsack.
Known as the French knife in the United States it can be bought with a fixed blade or with an easy-action folding blade for swift surrendering. In either form its simple elegance has found many fans; in 1985 the V&A Museum selected the Opinel as part of an exhibit celebrating the “100 most beautiful products in the world”, featuring it alongside the Porsche 911 and the Rolex watch. The Opinel was also selected as one of 999 classic designs to be exhibited by the New York’s Museum of Modern Art as a “design masterpiece.” 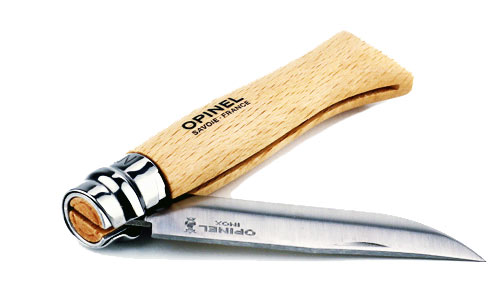 THE WALTHER “PLEASE BRING IT BACK IN ONE PIECE, COMMANDER BOND” MTK TOOL

In 1957, Ian Fleming received a fan letter from a Mr. Geoffrey Boothroyd, a Bond enthusiast and firearms expert, dissing 007’s weapon of choice, the Beretta 418, as “a lady’s gun” and suggesting several alternatives with “more stopping power”, including the 7.65mm Walther PPK. After James Bond was issued with his German-made Polizeipistole Kriminalmodell in Dr.No, it soon became the most famous handgun in popular culture. However, fewer people know that it was also a Walther PPK that Hitler used to blow out his brains with.

If you’d like your pocket knife to have a tenuous link to England’s greatest fictional secret agent then you’ll be pleased to know that Walther also make a wide range of slightly less deadly gadgets. As a nod to James Bond’s PPK the Walther MTK Multi-Tool’s blade is also around 7.65mm long and features snub-nosed pliers for fixing stuck zippers on female spys’ frocks, a tool for de-stoning martini olives and a range of ‘driver bits for mending troublesome Lotus Esprits. 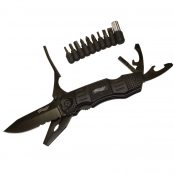 P3700 – A PENKNIFE FOR THE PORSCHEPHILE

From the people who brought you the £350 tobacco pipe and the million quid Advent calendar comes the Porsche Design P3700 pocket knife. Built by the Swiss Army people it has the same basic tools as Victorinox’s £20 Camper model but, and here’s the crucial bit, it has “Porsche Design” written on the side of its aluminium handle. That apparently makes it worth over twenty times more to a knife collecting aficionado. Available in either black (shown here) or silver, the knife features a contoured body with your usual assortment of tools, including a straight blade, corkscrew, scissors and a file you can strike matches on, should you wish to set fire to additional bundles of slightly used bank notes. 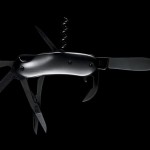 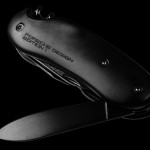 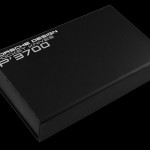