On the back of MotorPunk’s calling card is our manifesto. Point 2, for those who haven’t read it, says “No loud stereos. Wirelesses need only be adequate to hear the shipping forecast over the gentle thrum of a Rover V8”. We love this engine. It’s an old Buick engine used widely in British sportscars throughout the years, relatively light and compact it powers a diverse range of quintessentially British sportscars, like the TVR, Morgan, Marcos and MGB pictured here. We rumbled over to Shelsley Walsh to play with V8s. 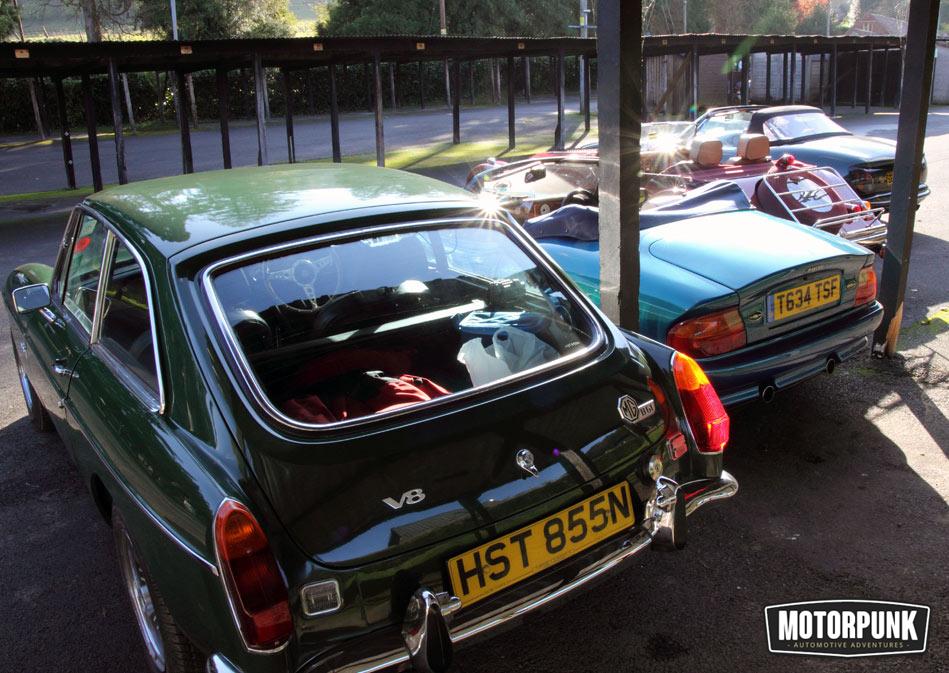 Our friend James Agger TVR coughed some keys to a pristine 4.5 litre Chimaera, with 285BHP and a 0-60 time of 4.7 seconds. This was, for me, the best looking car of the day but beyond the engine note and exterior styling it quickly lost it’s appeal to me. The standard brakes, as James had warned me, were inadequate. I think they’re from a Sierra. The roof didn’t seem to fit properly, the trim didn’t feel right, and when the tyres let go at the slightest provocation you wondered how this would all hold together if/when it goes belly up. This car’s 285BHP in 1060Kg of tubes and plastic panels is too much already but for those addicted to danger could plump for the 5 litre 340BHP version. The sports exhaust note made birds fall from the skies clutching their bleeding ears. Still, pretty thing, isn’t it? 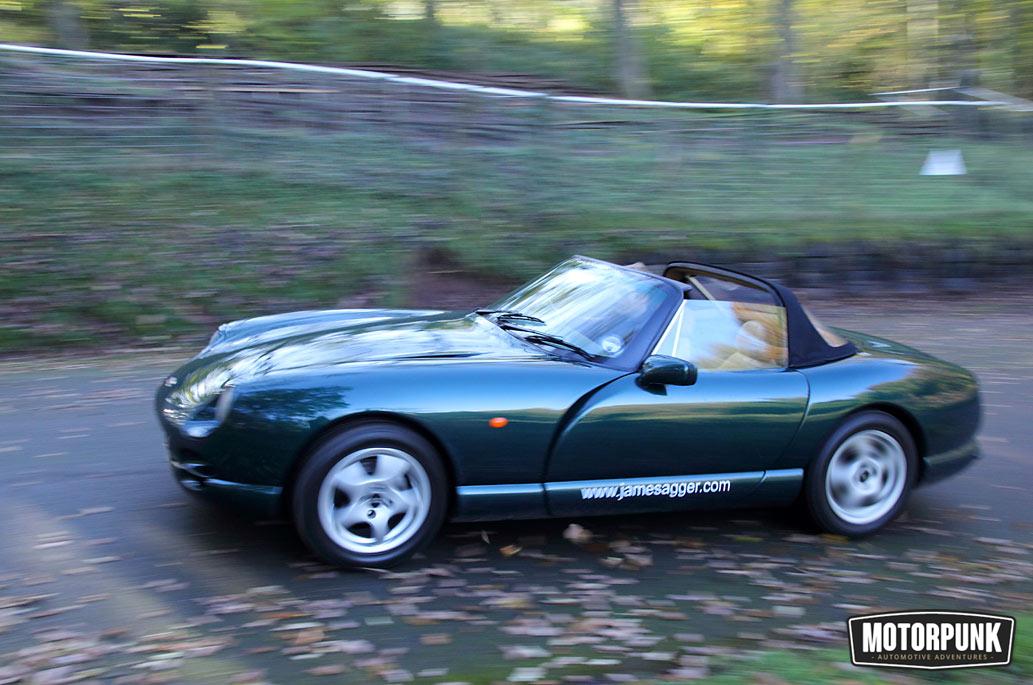 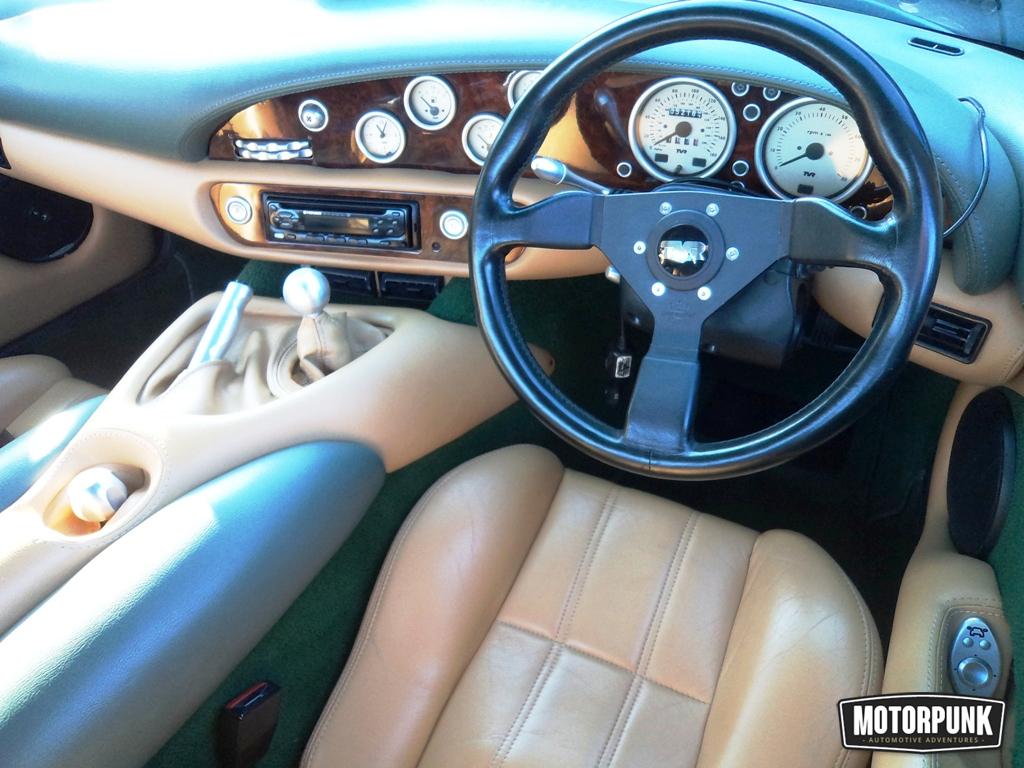 The MGB GT V8 was brought along by Jamie, at 18 years old he clearly wasn’t happy with a Corsa for his first car, although in this stage of tune his 1973 V8 has just 137BHP. It’s a bit wallowy and the slowest thing here but it’s a lovely old machine and felt more robust than the TVR I had just chickened out of. Wind-up windows, old leather and a walnut dash are nice touches. I was quite happy to thump up the hill at Shelsley in the MGB, even though the course has no room for error, the grassy bank would launch you nicely down the hill on your left as you climb above the Worcestershire countryside. Shelsley Walsh (try saying that after a few drinks) is the world’s oldest motorsport venue, apparently, the scenery feels like it hasn’t changed in centuries. It’s a great place to play. 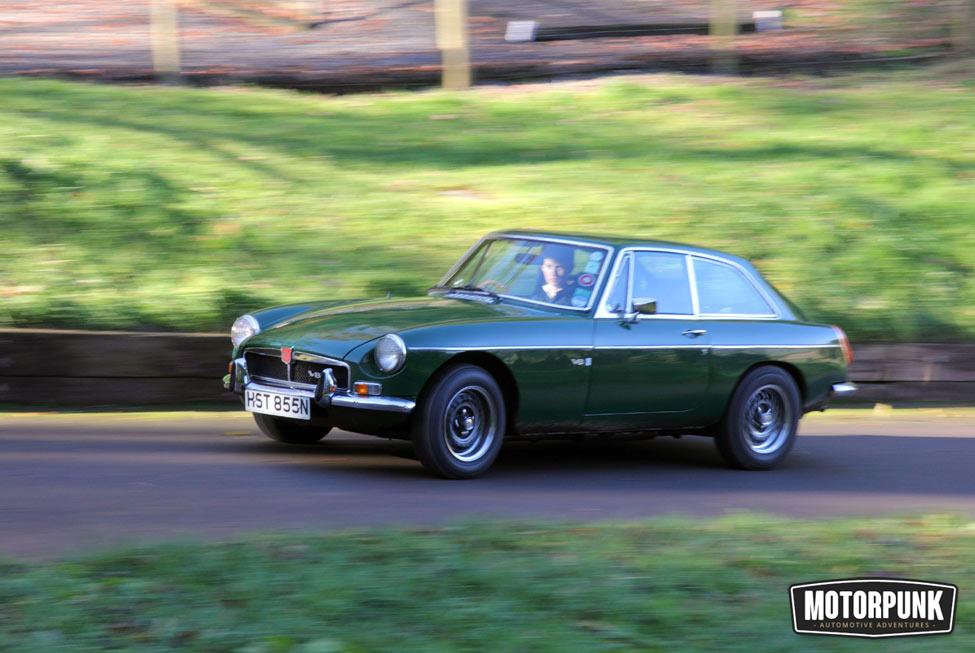 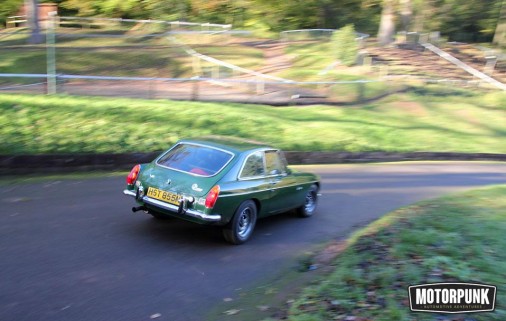 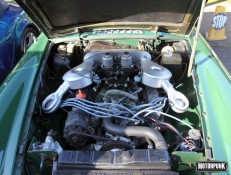 The bright blue thing? It’s a Marcos Mantaray. I wasn’t sure either. Marcos’s name comes from Gem MARsh and Frank COStin, Franks brother Mike being the COS in COSworth. So, the car then. Alan owns this Mantaray and it’s the best example there is. Like the TVR it has a fat transmission tunnel and some controls in odd places but you buy these cars for the thunder, it feels like it has a long wheelbase (perhaps this is accentuated by the cosy cockpit) and gives the impression you can drift it around a bit with confidence. I didn’t. I minced around the bends over wet leaves with the site owner, watching me, unblinking. We had booked a static photo shoot here but it had soon descended into a ‘which car is quickest’ up the hill. The Mantaray won that, when no-one was looking. Info on the Marcos Mantaray here. 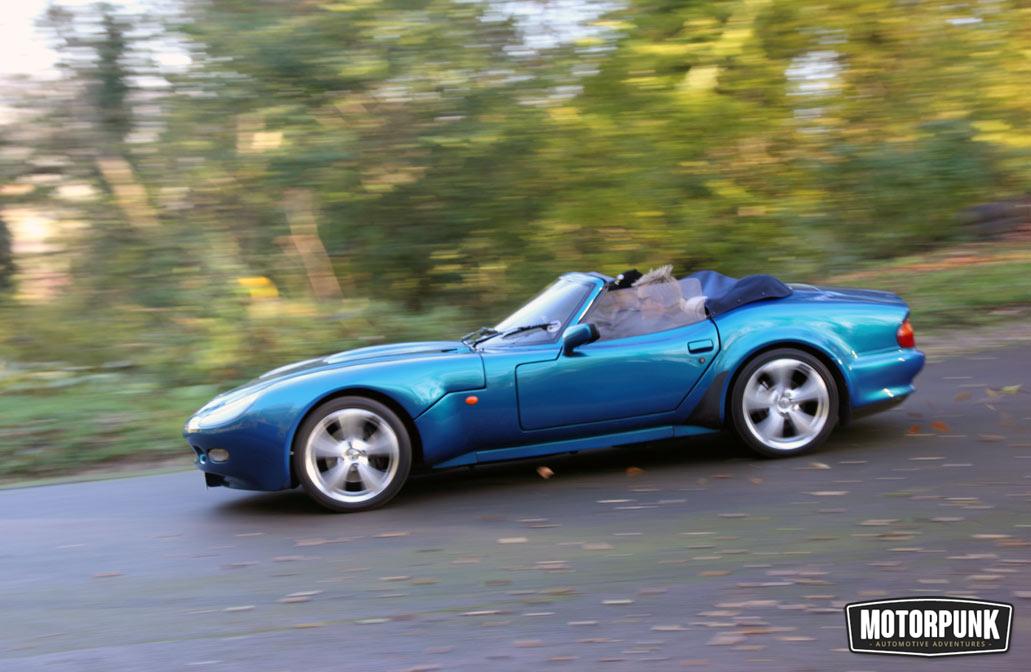 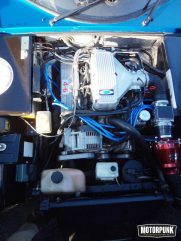 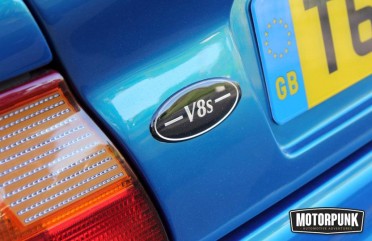 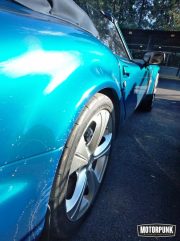 The last in the line–up is the Morgan Plus 8. This means the same V8 engine in a Moggy shape with some lovely details. Morgan later went to BMW V8s and Ford V6s but this engine suits the car perfectly. The details are lovely. There’s a chromed umbrella holder with screw cap ends fitted below the luggage rack, a millimetre perfect tonneau cover and enamelled Union Flag badges screwed (not glued) to flawless red paintwork. How can companies of roughly the same size and resources, with the same engines, in the same country, produce cars of such differing character as the Morgan and TVR we tested? The Morgan flatters, feels comfortable, like a pair of old driving shoes to the Chimaera’s brutish hobnails. The MGB is a bit ‘BL’ but not bad for it. The Mantaray is just mental. So, after another roasting for inappropriate skidding about, we wrapped up. 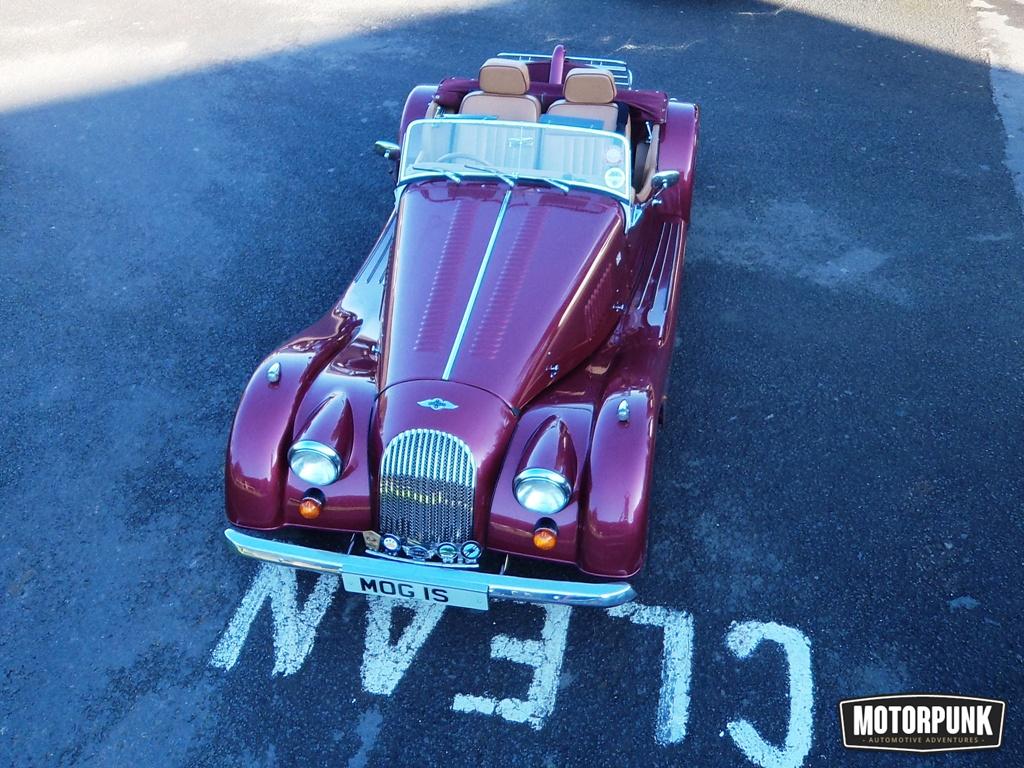 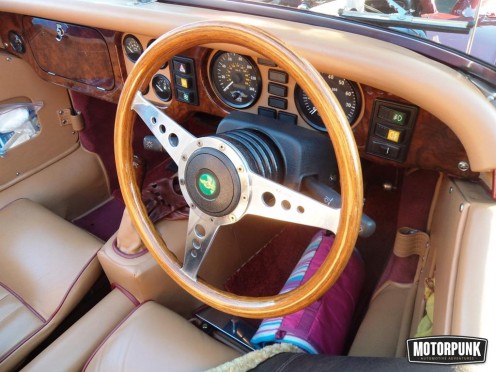 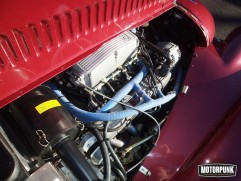 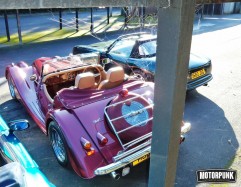 I can’t pick a favourite from these cars. They all have their flaws but that is what classic car ownership is about, loving the unconventional, finding fun where you don’t expect it and admiring the interesting little details. They’re great for a hoon on a hill, too, even if point 1 of the MotorPunk manifesto states “No showing off at the wheel. The heel and toe technique should only be employed to impress the opposite sex on the dance floor”. 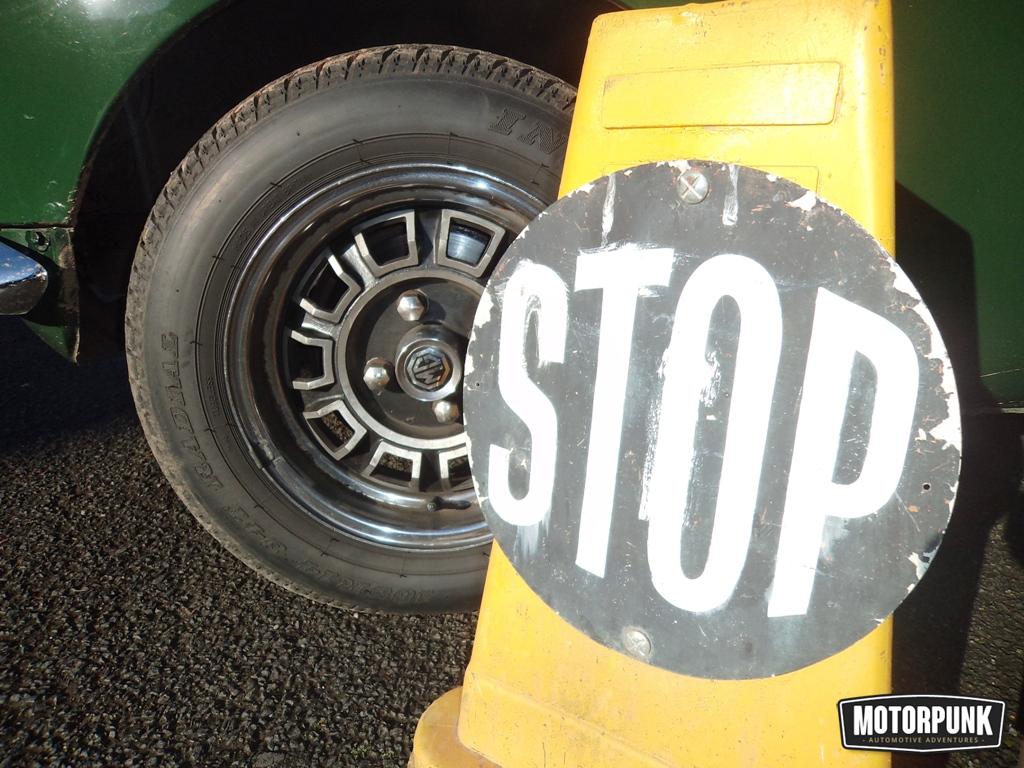