Did we see you at the Goodwood Revival? As part of our informal sartorial survey of the best, worst and most imaginative outfits of the Revival, we spoke to and photographed quite a few people (thanks, because this wouldn’t be much of a feature without you). Below you’ll find our light-hearted review, click to enlarge the pics. As always, we had a great time and met some real characters. Let’s start with a dead ‘sleb’, shall we?

I only briefly spoke to Graham Hill, gracing the Revival with his presence. 40 years of death clearly hasn’t affected him, enjoying a bottle of bubbly, but I was rather taken aback by his West Midlands accent. ‘Yorrite mayte’? 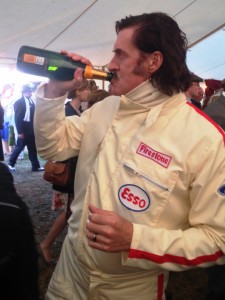 Ginger and the Whinger

Here is the Horner family (mk2). Geri gracing us all by not singing and Christian by racing a Mini. We didn’t catch the result but if he doesn’t like Renault engine reliability then his BL steed for the Revival would certainly have given him something to whinge about. 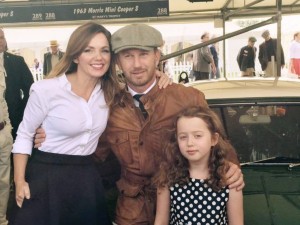 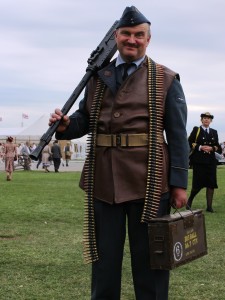 Shell girls and the trick to taking a good photo.

These girls are always popular, so popular, in fact, it’s hard to get a clear photo of them. Here’s the trick. Loiter behind someone with a photographers armband, wait for him to assemble these lovelies in order and as he crouches to take his snap, place your camera on his head as an impromptu tripod and get the perfect shot. That’s what I did and that’s why they’re smiling. 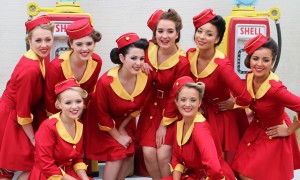 The smack of leather on wood. No, not a snipe at Max Moseley, that wouldn’t be cricket, this player has turned out perfectly for the Revival. It’s a great look, from cap to his whites – it’s time for the toss! No Max, not you. 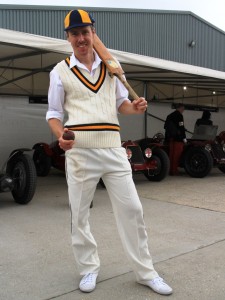 This Norwegian Air Force pilot was wearing his own uniform. Retired for a while, he was previously based at Rygge, sadly now a Ryanair base. Another aquavit in him and I reckon he’d fly one last bombing sortie, if asked, against O’Leary’s hell-buses. 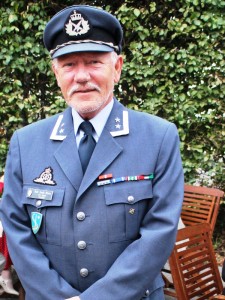 OK, it’s not the full squad, but from left to right below is Rich, Paul, Jonathan (with a whiff of travelling Horse trader about him), Mr Jeff, Harry and Dr O. Young Harry still in his school uniform having been removed for the day for a “dental appointment” and finding himself with the chaps at Goodwood instead. 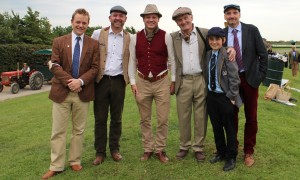 Mum was 37 weeks pregnant with this little girl at last year’s Revival, this year she’s here with a knock-out smile and a new fan of vintage racing. We love the retro pushchair, by the way. 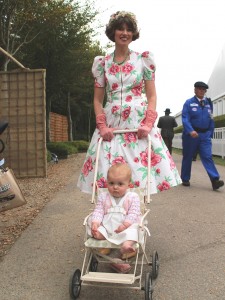 It’s an easy outfit. Jeans, shaggy coat, bandanna and a whiff of herbal relaxant. He’s here for the music, man, and the sixties chicks. Obviously. Peace, out. 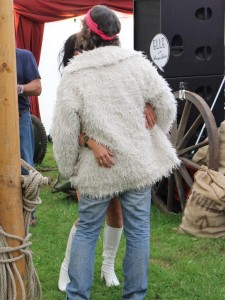 A Mountie always gets his man.

Another first-class outfit spotted at the ‘over the road’ part of the Revival, this Mountie was on a solo mission with no Missus Mountie to be seen. I’m sure he won’t have gone home empty-handed, Goodwood attracts visitors of every persuasion and a Mountie always gets his man. 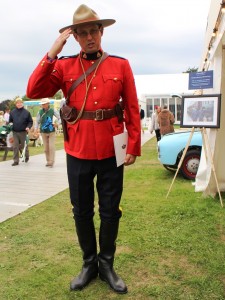 There were a few Biggles this year and this chap summed ’em up; Coat-hangered scarf, smokeless pipe, t-shirt under flying jacket and facial hair less convincing than Donald Trump’s fringe. And beer. There’s always beer. Still, none of this is to be taken seriously. Tally-ho! 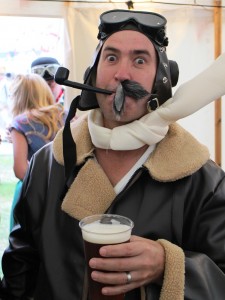 He should be on the front line, in a trench, in the rain, but this G.I. has deserted, fraternizing with the locals. Who can blame him? His dancing (not pictured) was worthy of a medal. 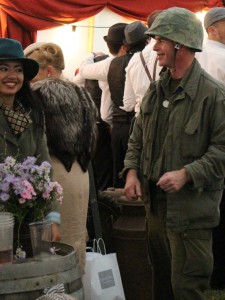 He waits. He watches. He films the ladies singing. He wears a canary yellow shirt and C&A woolly-pulley. He films some more. Right click. Save as. He is the one who enjoys action from a safe distance. He’d like to join in but isn’t allowed. He is the Voyeur. 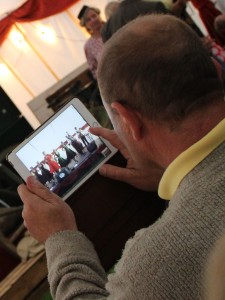 She deserves a medal, but there’s not much to pin it on. A vintage bathing costume and hat and a smile to lure any man into the deep end. Brilliant. Captain Corduroy looks more like the paddling type. Great to meet them both. 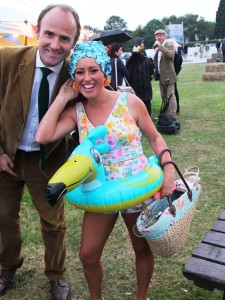 Goodwood employs a number of staff to mingle, in character, in the crowd. This fantastic char-lady gave us a happy wave but, from this angle, snapped from the tractor bus as we passed, it looks like her feather-duster wielding colleague is poking a very hairy lady-area with a stick. We’ll get a better snap next year. 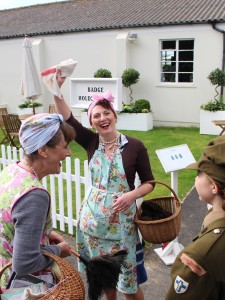 GRRC badges, paddock access, vintage uniforms and a proper beard. A prime spot on the banking. A bottle of whisky in the bag. These chaps know what they’re doing. They’re all pithed up. 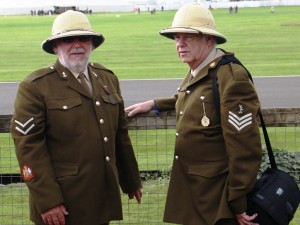 Stood at St Mary’s was this fellow, wearing his Grenadier Dad’s uniform and even carrying a photo of him in the same uniform in WW2, complete with upgraded epaulets, and a receipt from the outfitters who originally tailored the uniform. What amazing attention to detail and, if you’re reading, it was a pleasure chatting to you. 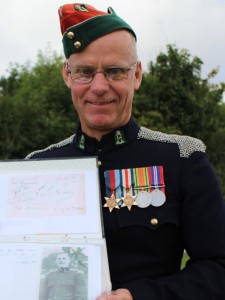 “Hallo. I am looking for ze top-secret Spitfire hanger, please can you direkt me? Danke. Ja, I am a real good Briddish Tommy, I have just misplaced my papers. What-ho, mein chum.” This, reader, is your author, pretending to be German, pretending to be English. I spent a few Reichsmarks on this outfit and while I didn’t earn the medals, I did earn the press pass. 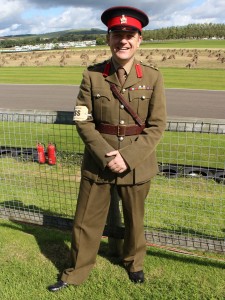 Here’s the bus driver, looking smart. Drivers were originally given unique badge numbers, worn on the left so that passengers who wished to make a complaint could see the number when boarding/disembarking, and report the driver using number without having to ask his name. They eventually ran out of unique numbers and started reusing old ones, these becoming “dead man’s numbers”. This driver actually is a bus driver during the day and moonlights driving historic buses for fun, a real Busman’s holidaymaker! 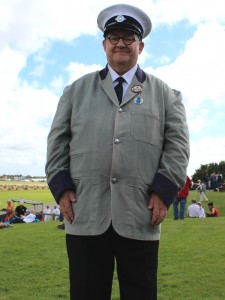 My name is Duisberg and I’d like a million quid in return for a 10% share in MotorPunk please. No wonder he’s grinning wider than you’ll ever see on the telly, sporting British and Cypriot flags on his overalls the least offensive dragon is in his first outing at the Revival in an Anglia and clearly loving it. A tenner for fifty percent of MotorPunk? Fifty pee? No? C’mon Theo, I’m on my arse here. 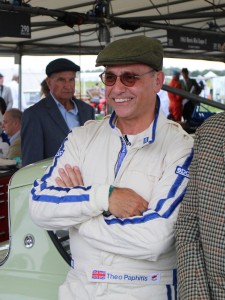 The none of the above

So many Revivalists aim for a particular look. There are whole squadrons of Biggles, for example, and a whatever the collective noun is for a lot of Mechanics. This gentleman, though, has managed to pick an outfit that is none of the above. A perfect two-piece tweed suit, waistcoat tailored to match the suede shoes and a cravat and hat combo to top it all off. The ‘tache is also flawless. It’s a look so sharp I’ll bet you didn’t even notice the Hurricane behind him. 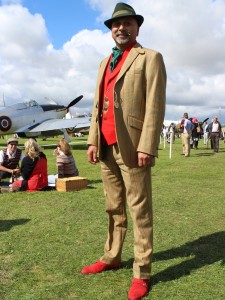 What better way to capture a retro look that using new tech? The lady on the left was actually on her hen-party, what a great place to come! Here they use a selfie-stick and iPhone to get a great picture of her big day out. Or perhaps they were snapping the pilots getting changed over the fence behind them. Last night of freedom, ladies! 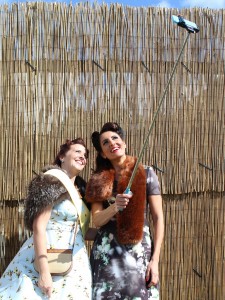 Me? Alex Goy? Motoring presenter and Revival virgin, pulling strings to gatecrash the prestigious Rolls-Royce enclosure overlooking the start line? The Revival royalty behind do their best to ignore the velvet suited gatecrasher but XCAR’s man soon skips behind the ropes for blagged champers and the very best view of the action. 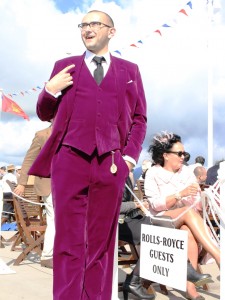 On their back under a Jaguar or on their arse fettling Ferraris, these are the real mechanics. They stand on the pitwall, nervously wondering if some over-enthusiastic wealthy amateur is going to bash the machine they’ve spent all weekend preparing. You won’t find them wandering round the funfair like so many other Revival ‘mechanics’ looking like an advert for Daz. 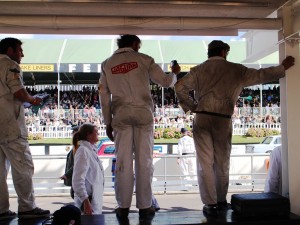 2015 was the 50th anniversary of the miniskirt and to commemorate that Goodwood’s busy pitgirls wore outfits that Mary Quant herself could have designed. But we couldn’t get a smile for the camera, the miseryguts, so you’ll have to make do with this picture of them flouncing instead. So much for the swinging sixties. 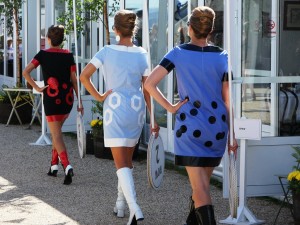 I’m crap with names. I nattered with this friendly khaki-clad Geordie for about 15 minutes before I realised it is comedian Ross Noble off the telly. Ross is into his bikes and this was his first time at the Revival, so top marks for the outfit, and thanks for taking the time to chat about retro motoring with us MotorPunks in the paddock. 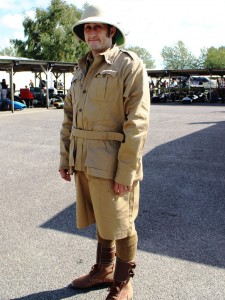 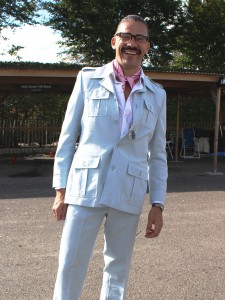 Fresh from his podium spot in the Settrington Cup, and proudly waving the twenty quid prize money from his Dad, this young man is ecstatic. The pedal car race is a 270 yard dash for kids and while some grumble that it