They’ve all gone, haven’t they? So many went abroad as Brits couldn’t give used ones away and owners up the eastern end of Europe bought them for spares. Eccentric elderly relatives who bought them new had their licences revoked and an influx of other cheap metal became more appealing than these models; The last gasp examples of communist cars sold in the UK. It’s not just the never-quite-straight 3 box shapes that we miss on our roads now, it’s the amusingly desperate adverts (click to enlarge); 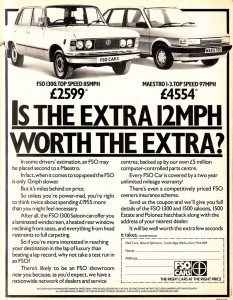 Is an Austin Maestro 1.3 too flash? How about an FSO 1300? Alright, a confession; I nearly bought a used one. As a cash-strapped 17 year old I thought that the FSO could, with addition of some rally bits, look just like the hot Fiat 131 Supermirafiori. FSO is an acronym of the snappy ‘Fabryka Samochodów Osobowych’ or ‘passenger automobile factory’, closely related to the sexier sounding Supermirafiori, the FSO being a Polish built Fiat of the same family. This design was already nearly 30 years old when this fantastic advert was published. If you, like FSO, believe the Maestro 1.3 is for the “power mad” who set “lap records” then the 85MPH FSO 1300 is the car for you. They stopped selling cars here shortly afterwards but FSO clung to life for some time, but after dalliances with various car manufacturer dregs (Daewoo, The Ukrainian Automobile Corporation and Rover), FSO eventually went under in 2011. FSO, with it’s 85MPH 1300 model, couldn’t even go bankrupt quickly. 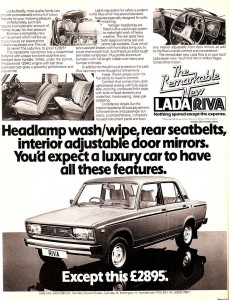 350,000. That’s how many of these miserable machines were sold in the UK and Ireland during Lada’s time here, sales peaking in 1988, roughly the time this advert was published. So, it clearly worked. People honestly thought that rear seat belts and headlamp wipers made a luxury car. You may remember seeing one of these cars yourself, if so you’ll recall that every single one had a wonky headlamp wiper. And rust. This model is based on the Fiat 124 and was eventually killed because it’s archaic carb-fed engine was obliged to have a catalyst fitted but was so toxic that it ate the cat and therefore most cars failed their first MOT on emissions. Lada persevered (with the Riva) but were doomed in the west. The advert is desperate. The car boasts “full swivel driver and passenger sun visors”. Who are these people who thought that a hinged flap was a luxury? What do these 1/3 of a million cheapskate dimwits drive now that Lada is gone? Our money is on Vauxhall. They’re a rare sight here today and if you want a Lada now, it’ll cost you almost as much as they were new. 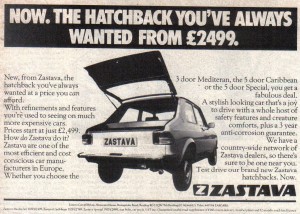 We try to keep these features fairly short. You might have a quick read over a cuppa, or on your phone, and don’t have time for 10,000 word stories. Fine. The thing is, we’d need at least 10,000 words to list every “hatchback we’ve always wanted” instead of a Zastava, despite what this advert says. Like the other Eastern-bloc horrors featured here this model is based on an ancient Fiat and while there’s no denying it’s low price when new, it is beyond ugly, particularly in 3 door Mediteran [sic] spec here. I particularly like the mention of “a whole host of safety features and creature comforts” without saying what any of them actually are. Zastava stopped selling cars in blighty around 1993 and in ’99 NATO bombed the factory (which made guns as well as ugly cars) for good measure. Zastava is located in Serbia and, unlike other manufacturers in this feature, still churn out cars (and guns) today, such as the fugly Fiat 500L (and this grenade launcher) and if the Fiat 500L isn’t bad enough, brace yourself and have a look at these prototypes of models that fortunately never made it to these shores.  “The hatchback you’ve always wanted”? No. Make it stop. 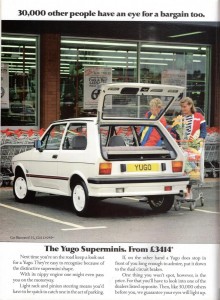 Yugo was a brandname used by Zastava (above) in export markets so perhaps we could skipped this car, but the photo in the advert, oh my! This Yugo 55 is amusing enough, even before limp the claim that “it might even pass you on the motorway”, but what a photo! I’m not sure what species those things in shellsuits are, let alone what gender, parked in what looks suspiciously like a disabled spot outside one of those supermarkets who’s shoppers pay with DSS vouchers. Look carefully and you might see the advert in the window for low price stewing steak. Yum. The Yugo featured, in appliance white paint, is the top-spec 55 GLS. The parcel shelf still doesn’t even have those bits of string to make it open with the boot. Cheap. The problem with cheap cars is cheap owners. Timing belts were supposed to be changed at 40k miles but most owners didn’t bother so they went bang and the cars were thrown away. Incidentally, when Zastava pulled out of the UK in ’93 there were plenty of unsold 55’s like this. Many (brand new and unregistered) were thrown away too, scrapped before they’d even been registered. Car adverts are supposed to make you aspire. This one does not. It makes me feel poorly just looking at it.