After three days in the seat, we rolled over the finish line in a time of 66 hours and 13 minutes. That’s an average speed of 0.56mph, though that did include pit stops for toilet time and milky drinks, plus the crossword and afternoon naps. Our pioneering eco-friendly electric vehicle race provided all the thrills of a trip to the Post Office, but with zero-emissions (excluding flatulence), meaning that no polar bears slipped into the ocean for our entertainment. Welcome to The Isle of Nan TT: the only motorsport event to be timed with a sundial.

Waitress: “Are you lot Extreme Trifle?”

Us: “Can we order some puddings please”

Waitress: “Yes of course, but first the Police are waiting for you in the bar”

Manx Copper: “Are you lot Extreme Trifle? Actually don’t answer that. I’m pretty sure you match the description we were given”.

It was hard to claim a case of mistaken identity. Only a coach party of ageing transvestites would have provided us with some cover. We fessed up.

“It’s alright, you’re not in trouble. We just need a contact number in case… you know.”

It was a surreal moment. To his credit, the copper managed to maintain a professional demeanour even as Oz provided his name and felt the need to confirm it was “Mister”, acutely aware of the fact he was dressed like a pantomime dame and had a bellend drawn on his forehead in lipstick. A moment that pretty much summed up the entire event. A year earlier we’d been watching some coverage of the TT races when the commentator remarked that there was still a £10,000 prize on offer for the first electric vehicle to lap the circuit at an average speed in excess of 100mph. Later, a stroll to the local cafe provided the eureka moment as a mobility scooter trundled out of the chemist and proceeded to carve up the High Street leaving pedestrians and prams in its wake. A grin simultaneously spread across our faces. The Isle of Nan TT was spawned. 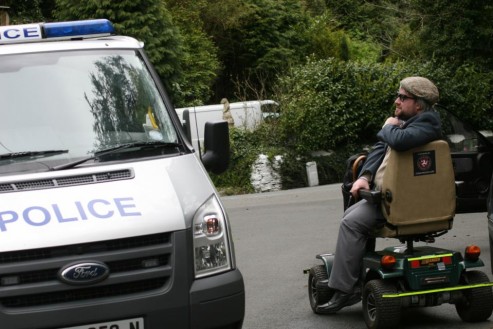 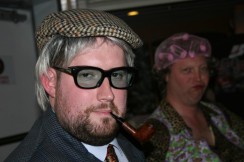 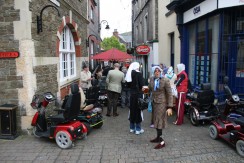 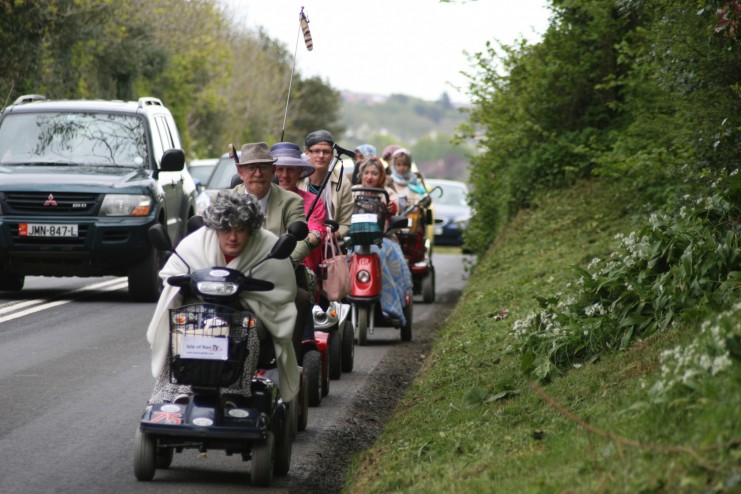 The rest of the day was spent doing research into the all important questions such as “Do you need a licence?”, “Do you need be to registered disabled?”, “Can you drive a mobility scooter while drunk?”. The latter question did produce some epic Google results with our personal favorite being the 67 year old who got arrested for driving drunk at 6mph with a passenger “clinging to the front“. The Mirror reporter then took journalistic licence to the extreme in claiming that the pensioner had previously been arrested for “riding his scooter at speed“. Encouraged by the fact that even if you’ve never seen a Highway Code, or ridden a bicycle, or you are in fact a free range chicken, you can hire a mobility scooter, we set about making plans to compete at the world famous TT races.

A year later we were cruising across the Irish Sea with a fleet of 15 mobility scooters parked on the car deck. The crossing was spent indulging in a frantic game of Bingo and unsuccessful attempts to obtain Senior Citizen discount on the food. With the Steam Packet ferry reaching a speed of 19 knots, it turned out to be the fastest part of the weekend. For our first night we were kindly hosted by the Joey Dunlop Foundation at Braddan Bridge House. After a quick change into comfortable evening slippers and gowns we nipped up the road to the Quarterbridge Pub for the pre-race briefing. This mostly entailed drinking and ordering a load of pizzas while our Clerk of the Course, Bernie Ecclescake, notified the competitors that they would not be required to do a formation lap on the grounds that this would add three days to the schedule. The next day we awoke feeling spritely and ready to roll but there were ominous signs. Black clouds and rain were looming and there was a traffic police car parked in the layby across the road. Were our plans about to be scuppered before we’d even let rip down Union Mills? We decided to delay the start in the hope the Police might get bored and move on. 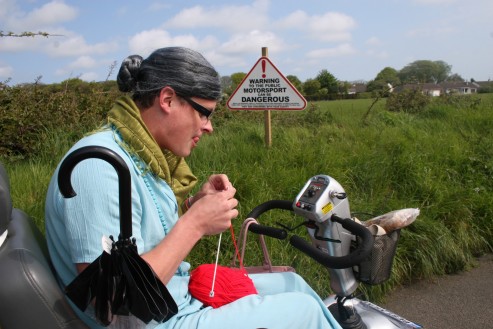 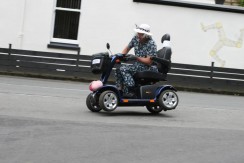 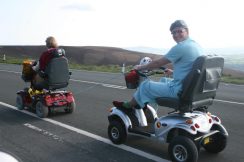 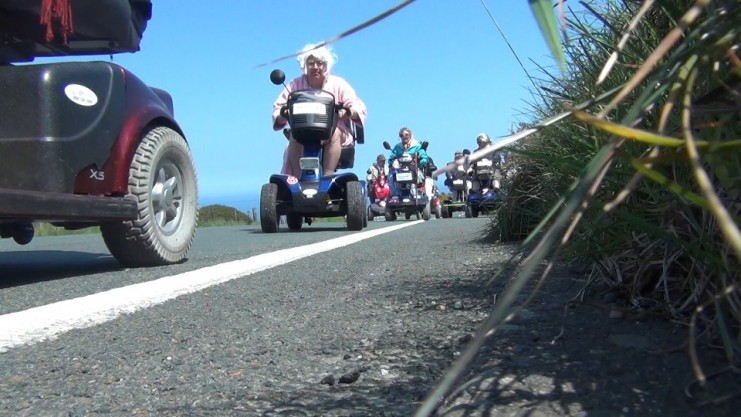 Since Yorkshire Tea had kindly posted us 5,000 tea bags we banged the kettle on and tucked in to our stash of Mr Kipling almond slices. The Police didn’t budge. In the end we could delay no more since we had ambitious plans to do 17.5 miles to reach the Sulby Glen Hotel where our evening dinner and bed for the night was waiting for us. We pootled out of Braddan Bridge House safe in the knowledge that whatever the Police were going to tug us for, it wouldn’t be speeding. With one eye on the road ahead and another nervous eye in our wing mirrors we waited for the inevitable. Sure enough, the Police pulled alongside us and on went the blue lights. For a bum clenching moment it looked like the Tena Lady pants might be put to the test. Fortunately the Police just gave us a wave, and disappeared off into the distance leaving us to potter on our way.

The slight disadvantage of being the slowest thing on the road is that we had to drive in the gutter. That meant that all the stuff that usually doesn’t matter like storm drains and hedgerows suddenly become your enemy. One minute we were admiring the countryside and the next trying to untangle some protruding foliage from a hairnet. There was a particularly hairy moment where due to heavy traffic we had no choice but to all drive over a dead rabbit nearly causing multiple highsides. With no suspension it’s hard to ignore the fact you’ve just mown over one of Thumper’s cousins. Having been overtaken by cars, lorries, tractors and a kid on a BMX there was a small moment of triumph when we eventually overtook something with wheels. Admittedly it was a pram and the pusher was gazing into an estate agents window at the time but it was still an overtake, without the aid of a slipstream. 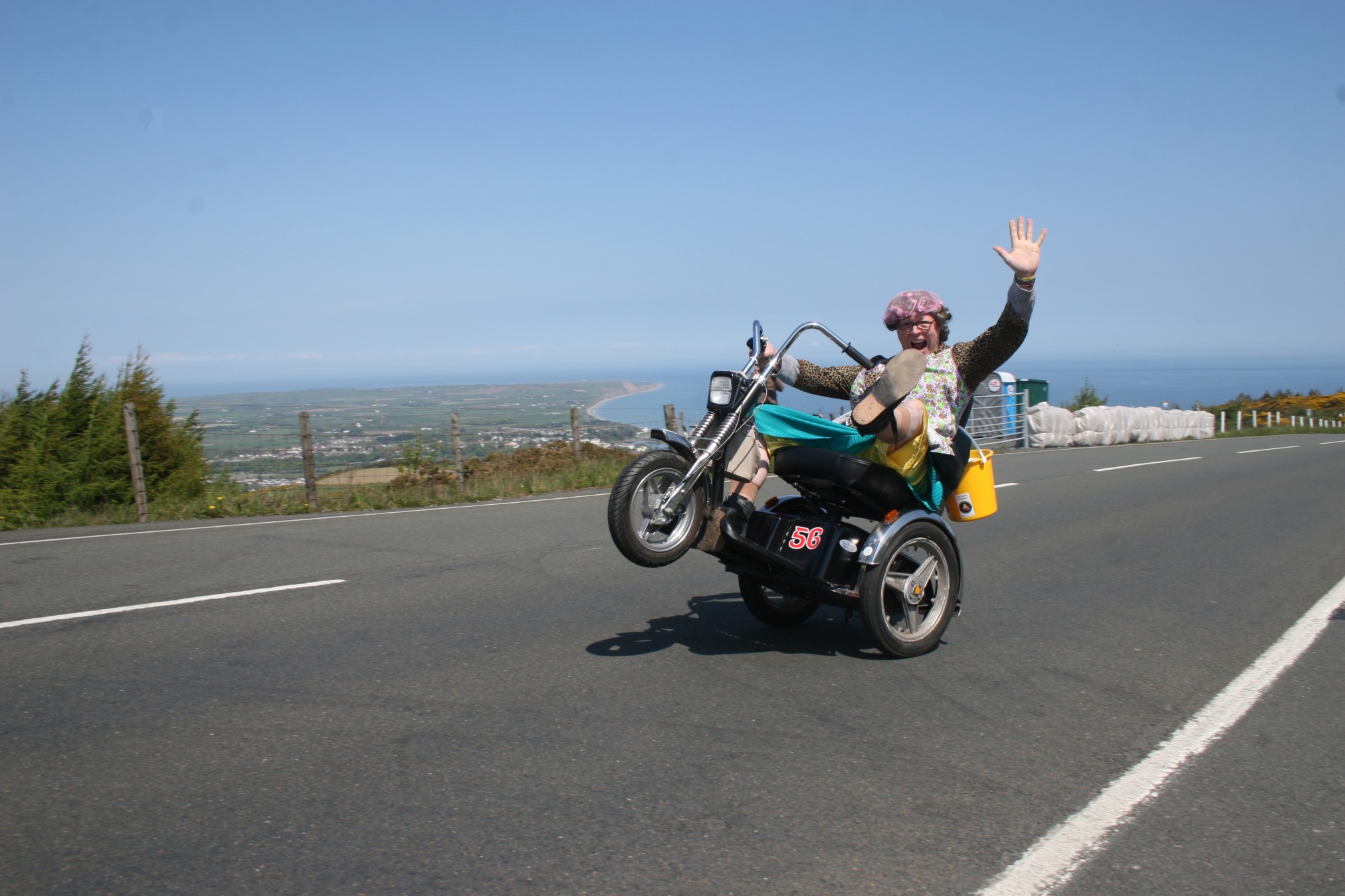 We pressed on, and after a pit stop at The Raven for recharging we continued to push on having long given up on our dream to crack the 100mph lap, a speed which our vehicles could only achieve in freefall. Eventually we rolled into Sulby Glen where the legendary landlady that is Rosie Christian welcomed us all, valet parked our scooters in the marquee, and set about lining us up a few well deserved pints before dishing out din dins. Result. The next day we had a tough 17 mile stretch across the mountain section, with no access to charging points. Instead of worrying we instead lived for the moment with a pipe and a Bailey’s. Beautiful sunshine and a monster cooked breakfast greeted us in the morning. We thanked Rosie and set off down Sulby Straight where some riders achieved speeds in excess of 7 mph. After the particularly bumpy section down to Ramsey we decided to stop for scones and jam to reapply our make up and tighten our curlers before tackling our nemesis, the mountain.

Within a mile or so it became clear the mountain had the upper hand. Battery indicators started plummeting towards the red zone and average speeds were dropping to around 3 mph. When some of riders at the back reported being overtaken by a woodlouse we knew we were in trouble. Eventually the mountain claimed its first victim. The “Townmaster”, which had set the pace on day one could not cope with the incline and paid the price with an overheated electric motor. Camaraderie is high among TT racers however and a dressing gown cord was soon donated as an emergency tow rope whilst other riders gave the stricken machine a good shoving from behind. The cruel mountain continued to claim more victims until at one point four competitors had to push their vehicles to a marshal’s post on the mountain mile and await the arrival of the support vehicle. In any other circumstances the sight of a hearse parked up next to some grannies on mobility scooters would look like the most crass form of pressure salesmanship but as it was they were merely our pit crew arriving with hot tea, biccies and a rather large diesel generator. 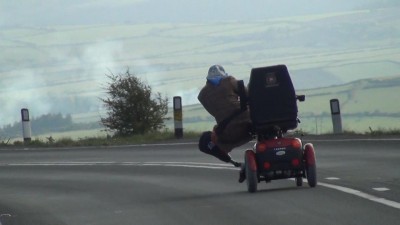 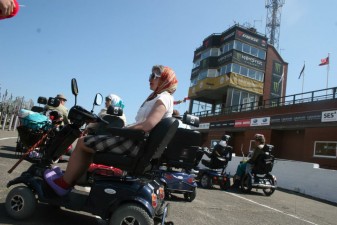 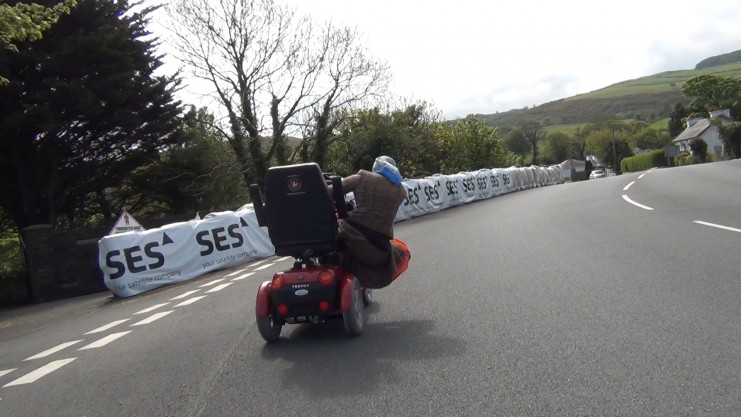 An hour and a half later the scooters had enough juice to continue progress up towards the Verandah. We arrived there with a sense of awe. This was the scene of Connor Cummins monumental get off at the TT in 2010. We we only too aware of the dangers of sliding off on this treacherous part of the circuit but thankfully, apart from sliding off to sleep, we emerged unscathed with word that the leading riders had reached the Snaefell Mountain railway station where the station master had kindly produced an extension lead for some much need recharging. After a two hour pit stop, and as the last train headed off down to Laxey we set off for the final push up towards the highest point of the circuit near Brandywell before the high speed descent down the other side where the “Streetmate Elite”recorded the highest speed of the race at Windy Corner, topping out at a mind-altering 9mph. As we rounded Kate’s Cottage our stopping point for day two, the Famous Creg Ny Baa, was now tantalisingly close growing slowly larger in the distance.

One by one the riders rolled in and each scooter was swiftly parked up round the back and plugged into an extension lead the staff had kindly threaded out the back door. The relief and adrenaline of having all made it over the mountain led to behaviour not becoming of ladies of senior years as we basically got twatted leading to various beer related injuries including laddered tights, a broken necklace and a deflated boob before a very drunken taxi ride in to Douglas for a kip in our hotel. Going for breakfast the next morning produced another bizarre experience as the only other guests in the hotel were a coachload of olds on a Saga holiday. After gleaning some useful tips on the best hamaerroid cream and how to dribble porridge in to your own lap we got taxis back to the Creg. 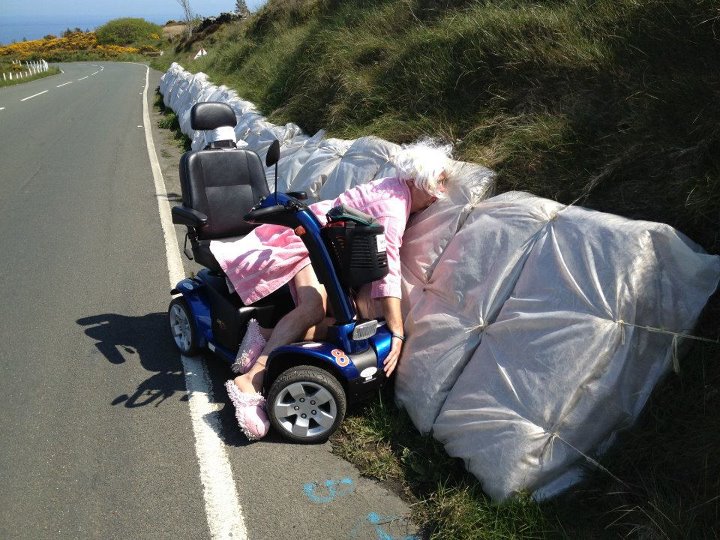 Mr Sunshine was out to play again so there was no need to deploy cardigans and after we’d performed a few fly-by wheelies for our own pleasure we headed off down towards Signpost corner and the final run in to the Grandstand where flag-waving crowds would welcome us in as heroes while the Red Arrows did a formation loop overhead. In reality we were greeted by the sight of a lonely builder’s arse crack as he hammered a sponsor’s hoarding to the roadside. The place was deserted so we did what any self-respecting biddies would do and headed down to the prom to sit on a bench with our legs inappropriately far apart while tucking in to an ice cream when without warning several members of the FIM turned up for a random drugs test leading to the entire field being disqualified when extreme levels of banned substances were found in all competitors ranging from illegal milk supplements to the performance enhancing drug, marzipan.

After muttering to ourselves and remarking about how “all this use to be green fields” we then headed off to finish our visit to the island in the place it started. The Rovers Return. Cheers!

Words and pictures by Oz from Extreme Trifle