Anyone interested in historic motorsport will know Monaco. “A sunny place for shady people”, someone once said, someone with a better turn of phrase than what I got. Amongst the apartment blocks housing tax exiles, and around the harbour with its moored up superyachts owned by iffy Russians, run streets synonymous with Formula 1. Today there is nowhere in the World with such a dazzling mix of glamour, opulence and motorsport history as Monaco. Yet there once was. Half an hour’s drive east along the dazzling Mediterranean coast, just over the border into Italy, sits the little town of Ospedaletti. 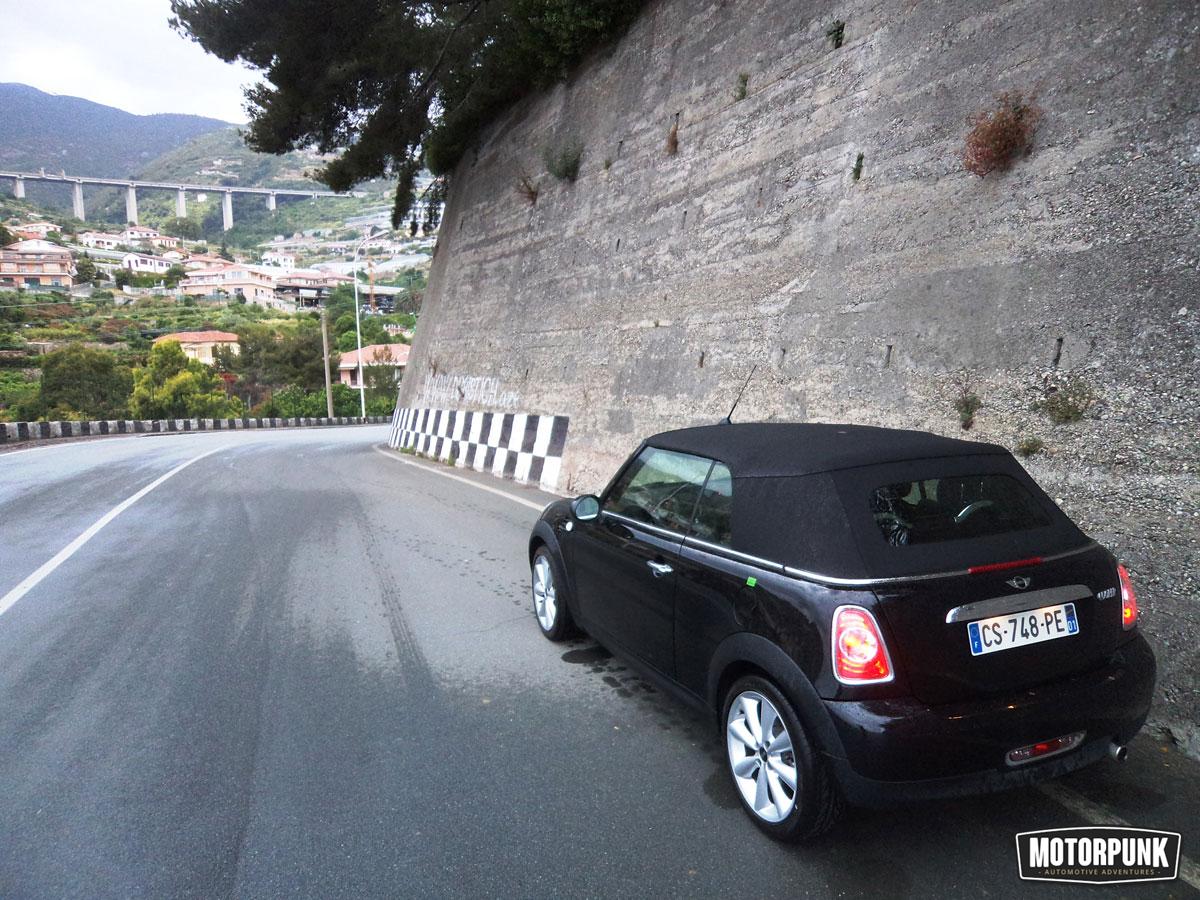 In 1937 there was a Grand Prix run on the impossibly tight streets of San Remo, as a one off, and in 1947 there was a (non-championship) race for the first time just along the coast in Ospedaletti. The event retained the San Remo name. Ospedaletti was the venue for the official San Remo Grand Prix from 1948 to 1951. I haven’t gotten to the bottom of why the racing ended in ’51, politics, probably. The ‘51 race was eventful though, Johnny Claes’ 4.5 litre Talbot suffered from brake failure at speed on the main straight and he frantically waved at the crowd to move. The crowd cheerily waved back. Claes survived the accident but one person was killed, three seriously injured and many others hurt. Ascari won that race, the last at San Remo; he also won the first post-war race in ’48 which is the once that most interests me most. Before that though, a potted history lesson; 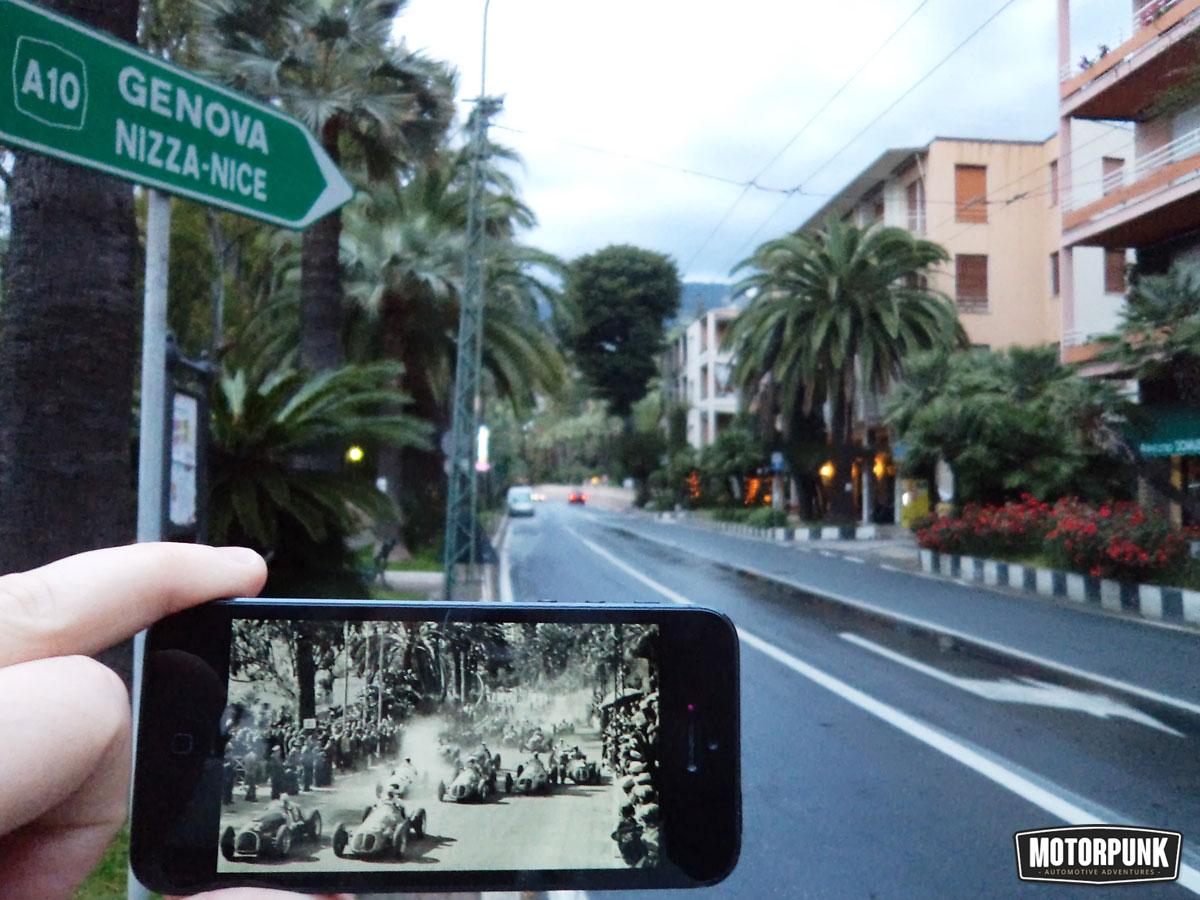 Prior to the Second World War San Remo and Monaco were very similar; casinos, grand hotels, sunshine and the moneyed elite of Europe spending heavily. Monaco, during the war, was under the rule of Prince Louis II. Louis was born and raised in Germany and was friends with the Vichy Government’s Marshall Pétain, he sat on the fence during the war and the Principality was occupied by (at various stages of the war) the Italians, the Germans and the Allies. Even the Communists ran the place for a bit – imagine that today. My rather laboured point is that Louis’s ‘we’re allies with everyone and anyone’ approach saved the town from receiving a pasting in the war. San Remo, just over the border into Italy, was heavily bombed. As lovely as it is today it never quite managed to recover like its more glamorous rival up the coast. 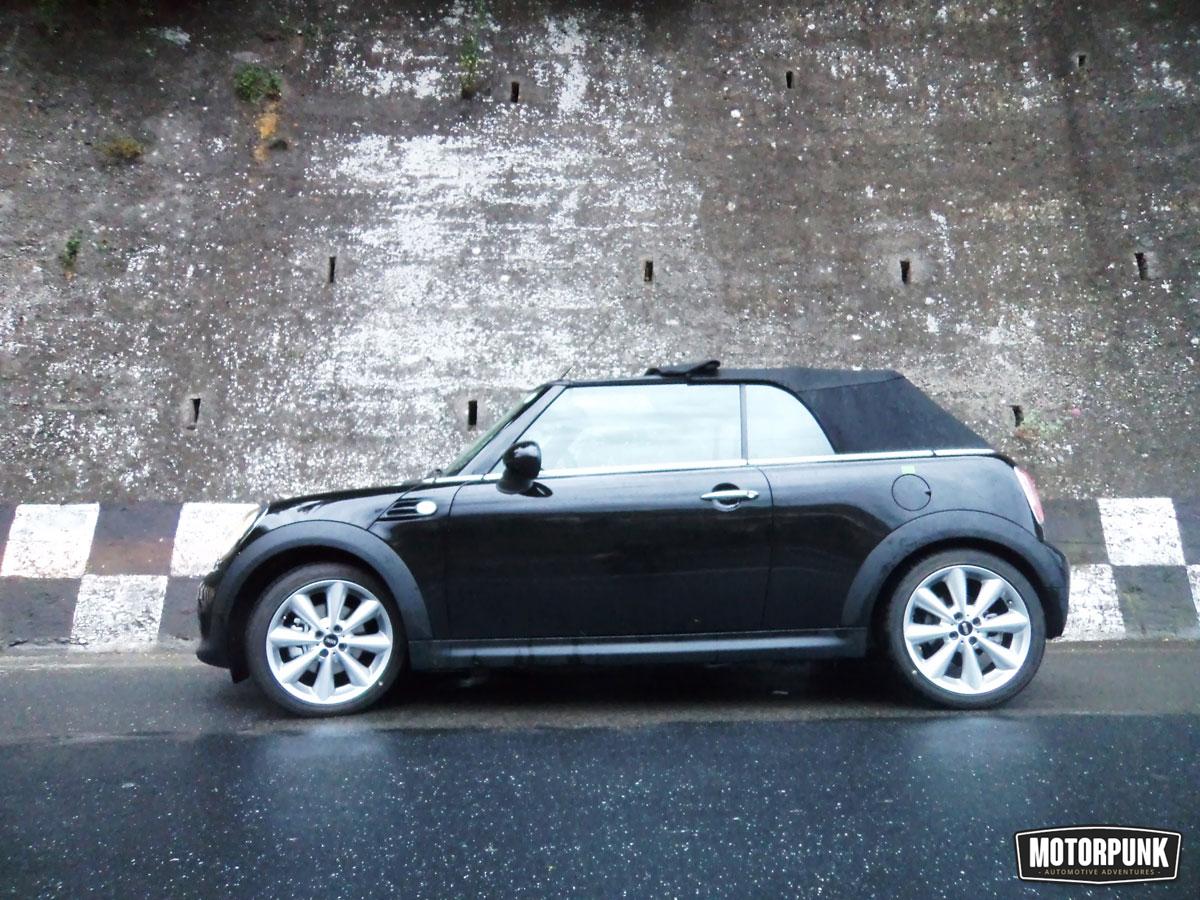 Enough history, for now. I flew down to Nice with EasyJet and picked up a MINI Cooper from the Hertz Fun collection for another MotorPunk roadtrip. So there I was, frantically lobbing enough coins at a toll booth basket to get it the barrier to open, not stopping to collect the €8.75 of loose change that missed, en-route to Ospedaletti. I had been in touch with a fantastic chap called Luca who had arranged to meet me at the Picadilly corner at what was once the end of the main straight of the famous San Remo Grand Prix street circuit. Luca has an infectious enthusiasm, talks ten to the dozen and apologizes endlessly for his “bad English”. It’s considerably better than my Italian. A note on the MINI: MotorPunk loves MINIs, this one’s an automatic convertible kindly provided by Hertz’s fun collection fleet, I was hoping for a Maserati but perhaps I did the paperwork wrong. It’s a bit overcast but I’m roof down. 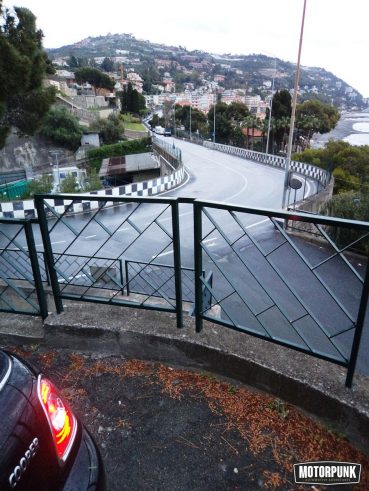 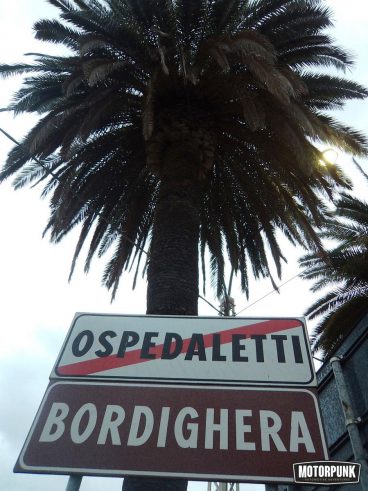 1948 was the year than San Remo held it’s first official post-war Grand Prix, it also marked the racing return of Maserati and the first victory of F1 legend Alberto Ascari. There were other race entrants of note; Prince Bira of Siam, Baron Emanuel de Graffenreid of Switzerland and the 50 year old pre-war Ace Luigi Fagioli, all in Maserati 4CLs. Talbots, Delahayes and Simcas also featured, and a Ferrari 166SC driven by Raymond Sommer. The Ferrari was remarkable in that it was essentially a road car yet it was raced successfully at San Remo and actually came 4th in ’48. If only the Ferraris in Monaco today could be put to such good use. The Maserati cars, returning to racing for the first time since the war, were a development of an old 1930’s design with a 1.6 litre four-cylinder supercharged engine. I made do with my 1.6 litre Cooper, though sadly not a supercharged ‘S’. 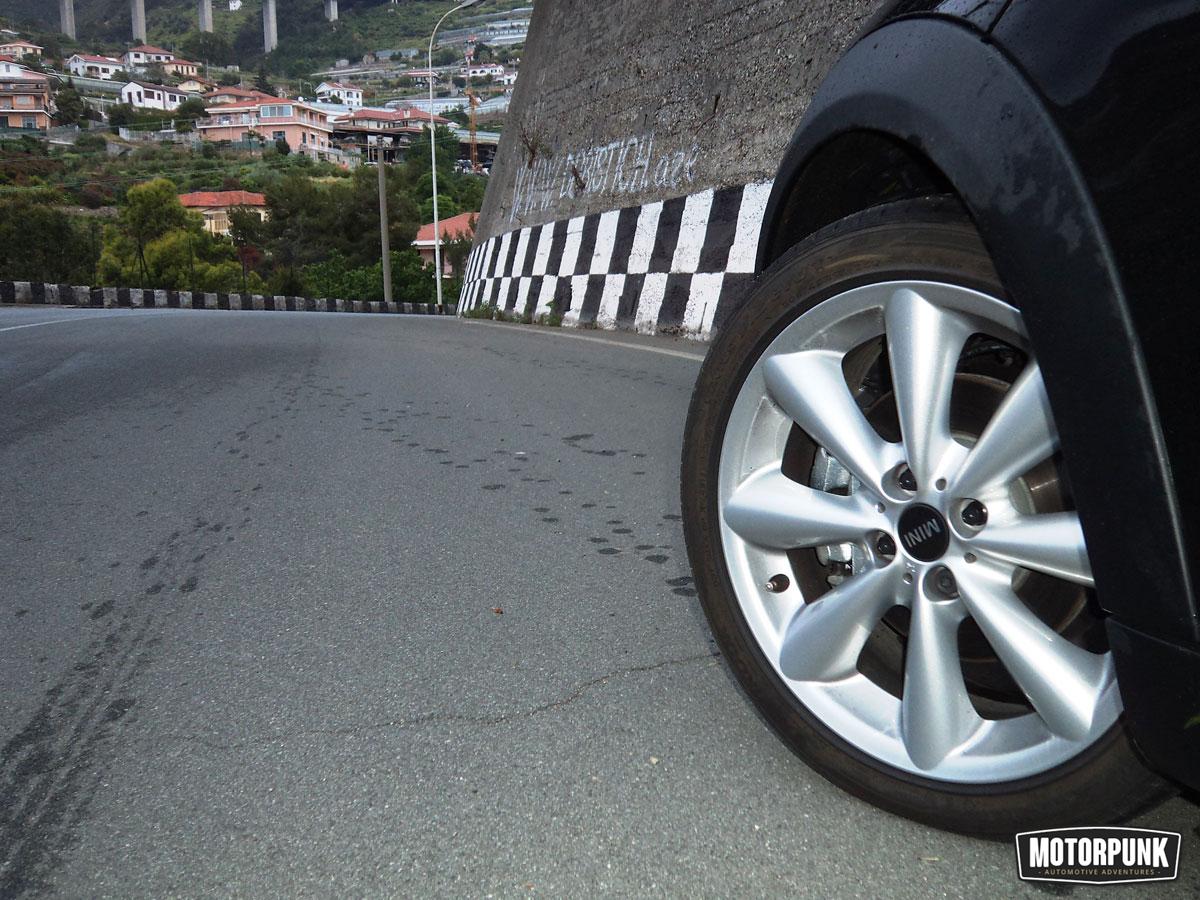 So, with an enthusiastic Italian stood on the passenger seat pointing out various landmarks and looking like a tank commander whilst simultaneously taking photos and talking excitedly to his wife on his mobile, we set off. According to Luca’s gesticulations, his wife was either morbidly obese, or about to give birth. I didn’t hang about. On the main straight is an old casino, now perhaps apartments, and next to that once stood the famous Hotel Regina. The hotel is now gone. “Bombed” said Luca, miming it too, for good measure. There’s a sharp left here and the flat coast road turns up hill, the terrain is very similar to Monaco, an ancient town clinging to a hillside. As soon as I’d rounded around the ‘Picadilly’ corner Luca told me to stop. We had a series of old photos and as you might work out from the pictures here, I’ve tried to photograph the old picture in the modern setting so you can compare and contrast. To get the shot at Picadilly, showing vintage Maseratis streaming up the hill, I had to park the MINI a bit illegally and climb the façade of a small apartment block. Luca said something about “prohibito” and a startled Chinese fellow shouted at me in Italian out of his apartment window. I’m not sure the resultant pic was worth all that effort but the thought was there. The hill is steep here, the next corner is the Grande Albergo Mirmare, a gentle right hander referring to another hotel no longer standing. More gaps in the scenery. “Bombed!” At Belvedere, the next turn, we went right and up again and then parked up at Ponticello, the highest part of the circuit. You’ll notice that in some of the pictures there’s a checker-board paintjob on the concrete. Luca now blathers on a bit, I get the gist of it, there was an historic motorbike race here a few years ago and the place had a lick of paint. Luca is clearly frustrated at the lack of interest in the circuit by the local council; Ospadeletti really should be a tourist hotspot like Monaco he says. I agree. 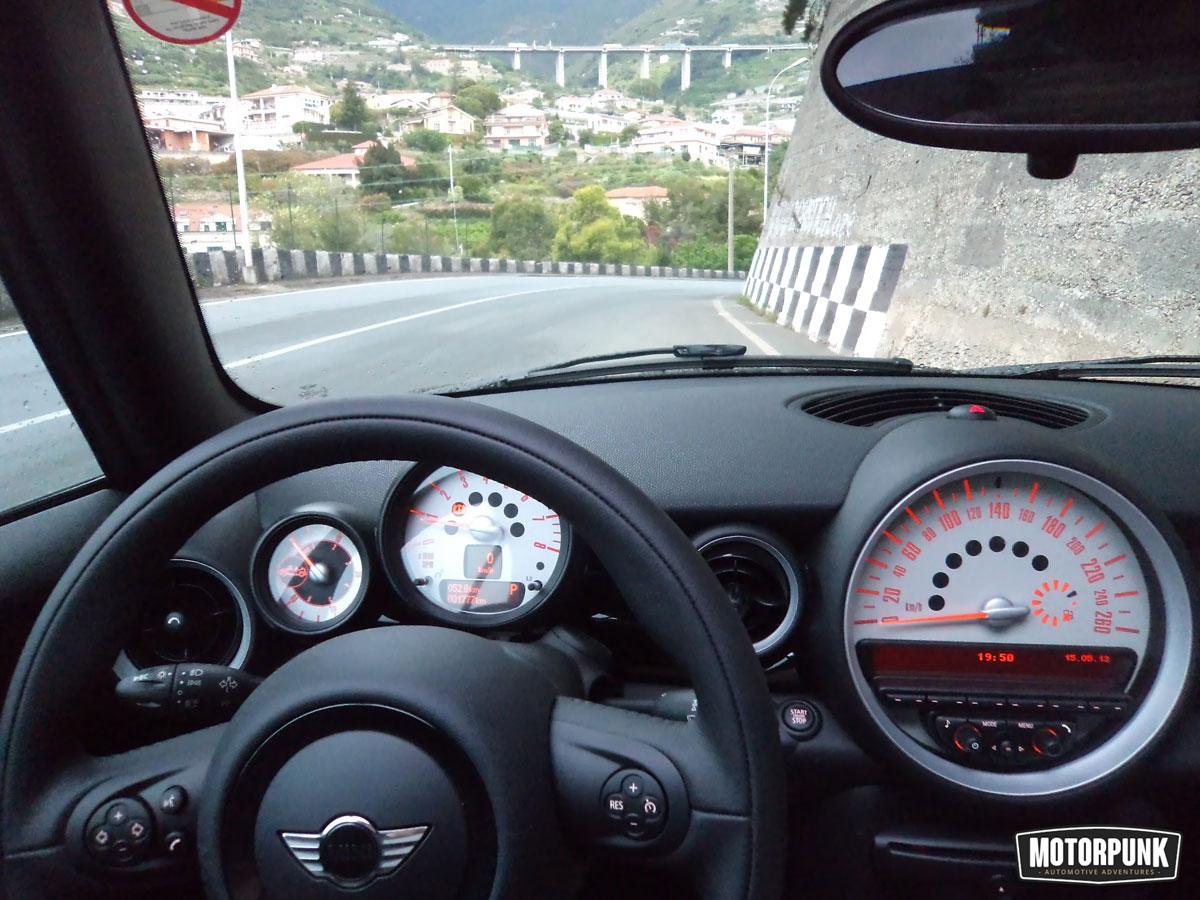 We take some pictures then drive down the hill, Corsa Bellavistas, a left, and then we park up again on the corner of Corsa Guglielmo Marconi and Via de Medici. The 1947 clockwise version of this circuit came up here from the coast road below, but today it’s a 30 kph one-way street and no-one in their right mind would take a racing car along it. Luca tries and fails to recall the English name for this corner, which then descends into a game of charades in the street with him enthusiastically miming away. I try to follow him; “Not white, no, the opposite, black, yes? OK, Black! What’s that, a Dinosaur? No. Jeremy Beadle? No. Aaah! Chicken! OK. What’s that? What are you doing Luca? Put it away, someone will see us! Ah, a male chicken. A cockerel! The black cockerel corner? Yes.” Phew. We stick to the ’48 track, Curva delle Mimrose, a short straight with a beautiful view of the Med to the left, and then a double apex to a downhill left-hander called Quadrata. Remembering to give way, we join the SS1 coast road which is also the main straight, palm trees on the right and the sea not far behind. Back to Picadilly, accidentally through a red light bang outside the Police station, a brief apology to a chap in a uniform fit for pantomime, then another lap. Ospedaletti is free from Monaco’s congestion, no badly parked Ferraris or dithering tourists hampering the hoon; with the mostly unrestored buildings sat amongst the palm trees you can imagine the thrill of screaming down the straight in a vintage Maserati, even if you’re in a modern MINI. In 1948 the pack did 85 laps on skinny tyres and the fastest lap over the 187 miles they raced was 61 mph, on a road surface best suited for livestock. Epic stuff. The result was a triumphant first win for Ascari and a 1-2-3 for Maserati.

Another lap, just for fun, although it’s now getting dark. Luca has been enjoying the ride and ignoring his permanently-ringing phone. A VW Touran driver catches us up at the Belvedere corner, overtakes like only an Italian can and then stops dead. A heavily pregnant woman is shouting like a machine-gun at Luca. It’s Mrs Luca. As they have a domestic my mind wanders off. The Ferrari and Maserati marques make the perfect analogy for Monaco and San Remo. Monaco is fashionable, obvious and ostentatious. San Remo is stylish, fascinating and welcoming. Mrs Luca eventually runs out of breath/bullets and then smiles. Luca smiles. They kindly invite me to dinner. I wish I had a Maserati. 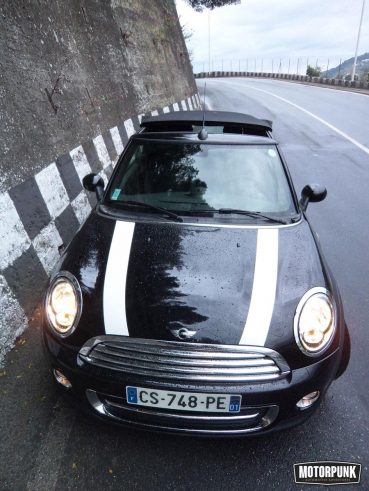 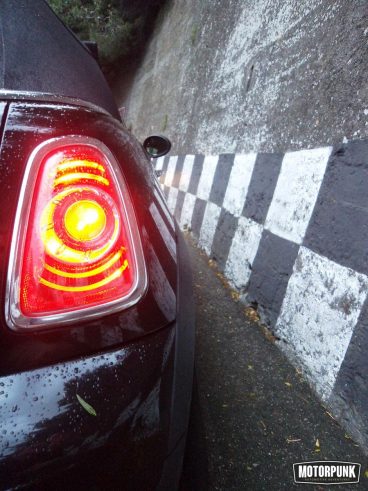 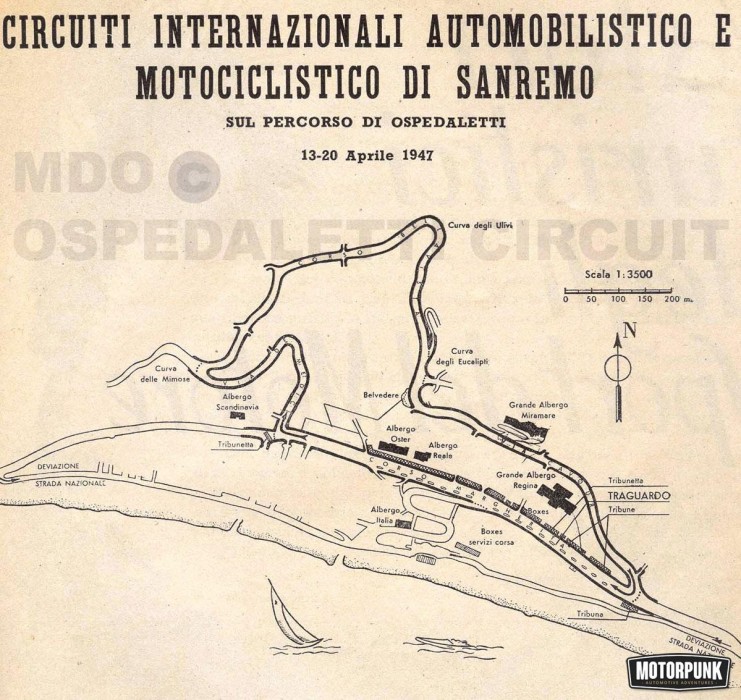 There’s more about the history of the circuit on Luca’s excellent Blog, see here.