Home
Articles
This one took some organising. Montlhery is another forgotten racetrack on our recent road trip that played a huge part in early motorsport. Today it’s a large testing and research complex just south of Paris and inside is a huge concrete bowl – the remains of an historic autodrome built in the twenties when France was at the heart of motorsport. After much wrangling we had been granted a few hours to film the next part of our little documentary series for our friends at XCAR. Only, when we got there, it didn’t quite go to plan. 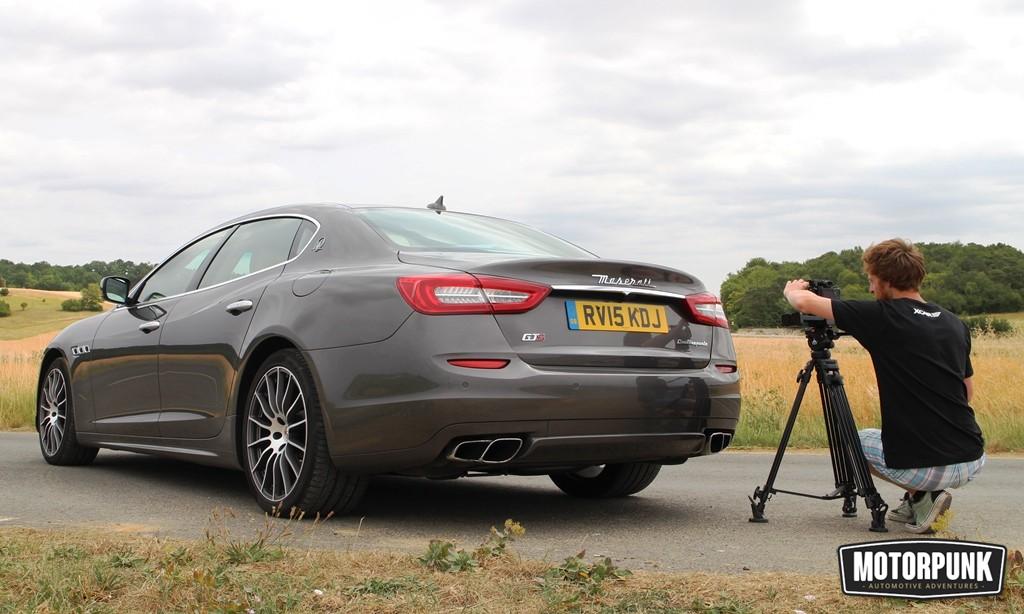 We needed a full day for filming but could only afford a few hours. We arrived and our contact was away. The site Manager was eventually roused and came down to see who these impatient Englishmen with a mucky Quattroporte were. This site is secretive. Manufacturers test new cars there. I saw a new electric Ssangyong hatchback which made me feel poorly. They were very busy. I don’t speak French but understood they wanted us and our little camera crew to go away. I don’t think they knew the significance of the circuit so I gave them (and now you, reader) a crash course in what is so special about Montlhery and why we wanted to film. 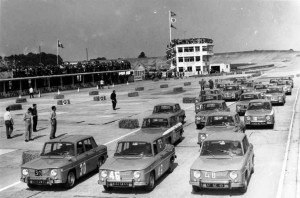 Built in 1924 it was designed to encourage high-speed racing, a huge concrete bowl of a circuit situated in the woods south of Paris. Britain, back then, was a minnow in motorsport and Italy and Germany were the main protagonists. As World War Two was brewing the French were desperate to encourage their domestic manufacturers to make racing cars that could compete internationally and organised an amazing event here in 1937. Called “the million Franc race” it was a race around the high speed oval designed to remind the world that French cars and drivers were to be taken seriously. I explained all this by talking loudly in English and gesticulating in Montlhery’s security office, thinking “I’m getting nowhere”…
The race was an epic tussle, tyres down to the cords, and cars ripping around the rim of the autodrome, flat out. René Dreyfus went on to win in a Delahaye, a French driver in a French car, he won the million Francs. Then war broke out and Dreyfus, this fantastic racer, was given a job driving army trucks. Eventually (as a Jew) he was posted to New York for his own safety. After the war the ‘million Franc’ Delahaye car was removed from it’s hidingplace , along with an identical one! The French had wanted to ensure that the Nazis couldn’t destroy the car to eradicate this famous French win and so someone had build a copy, just in case. Even today no-one knows which one of these two cars is the original. I finish my story with much gesticulation and a hearty “vive la France!” and the site Manager breaks into a warm smile, “Well, I never knew zat!” and personally shows us on to the track. 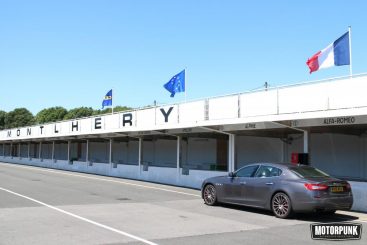 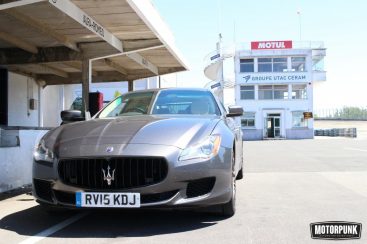 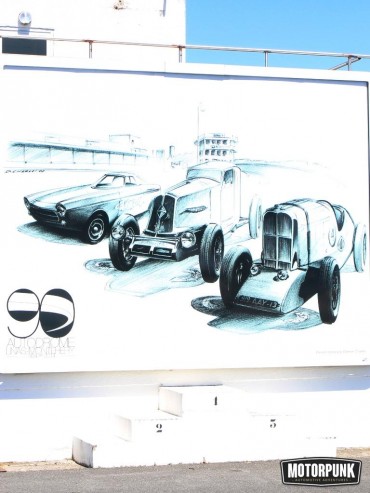 The bowl was designed for cars weighing up to one ton, capable of speeds of c.100MPH, and built nearly a century ago. Our Maserati Quattroporte GTS weighs almost twice as much and will go twice as fast. The surface is complete but dusty and a bit pockmarked and patched. At its steepest the banking is 51 degrees. Dr O parks our car high on the banking, climbs out (literally) and immediately snaps a ligament in his leg. We film a few pieces to camera with him hopping about and then the site Manager joins us. We’re allowed to do a lap or two, he kindly says, before we must leave as a new car is testing. Pardon the lack of quality pics here, we were up against it for filming; 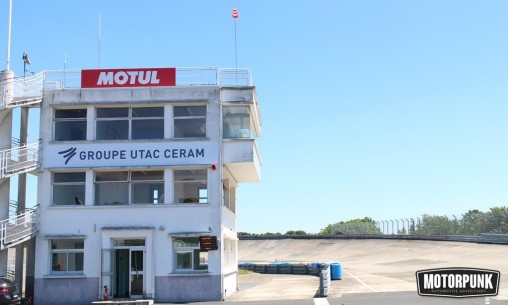 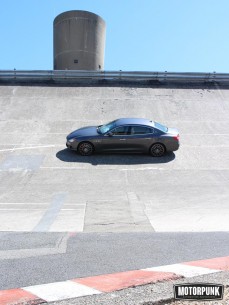 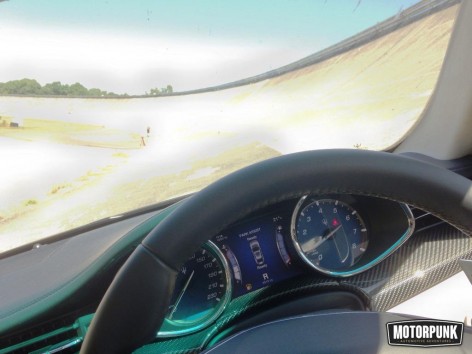 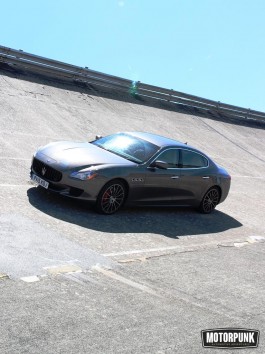 I’m mindful that Antonio Ascari died at the first race here in an Alfa, and Benoît Musy fatally took his Maserati off the top of the banking in ’56. We do a lap or two, or three, actually it might have been six when a prototype White Jaguar XE(R?) finally catches up with us, rigged with test kit, driver clearly surprised to find us wanging round his workplace. Time to leave Montlhery and go to our next appointment in Paris, with Carole, which is both a person and a track. 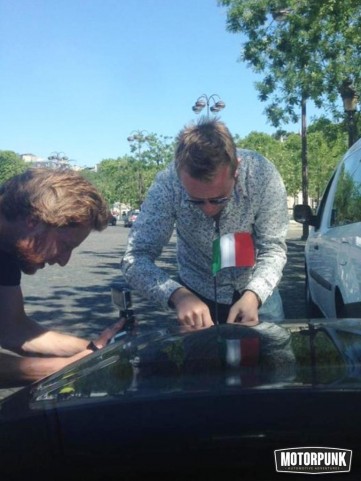 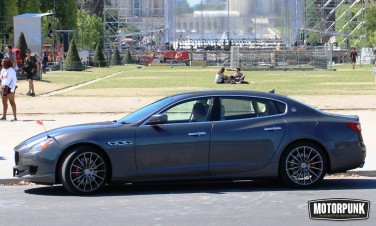 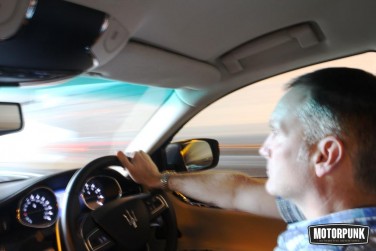 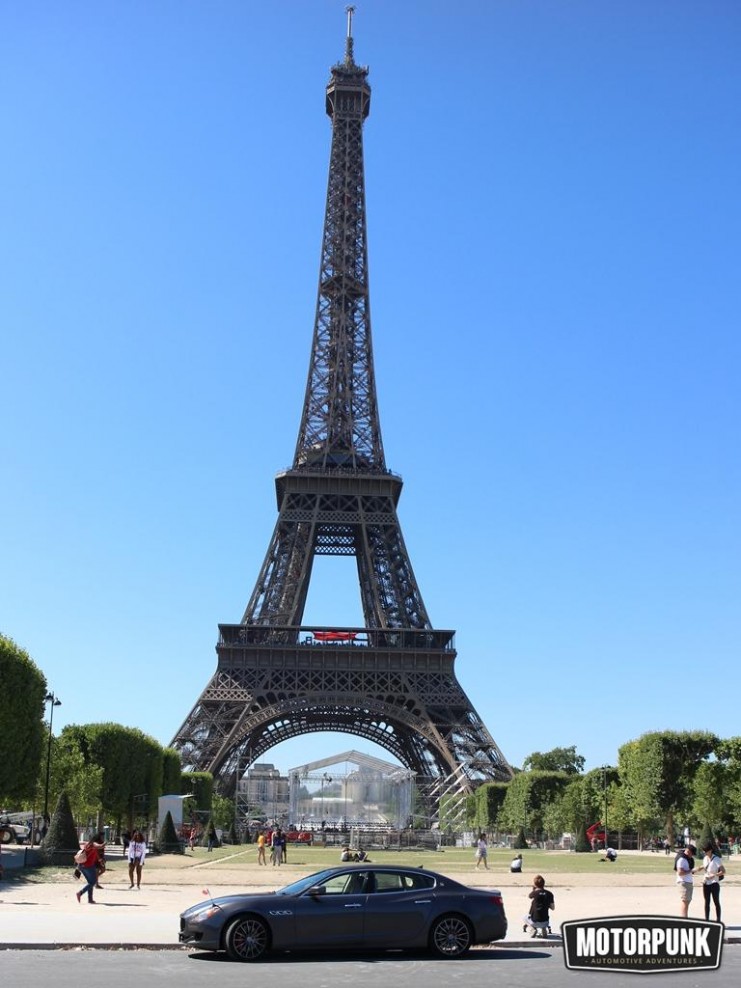 Paris traffic is, ‘scuse my French, a bit of a bastard. This Maserati is a press fleet blag and I’m keen not to have it bashed by the hornets nest of scooter loonies buzzing around my mirrors. Bikers have long raced around the Paris periphique, a bit like they did around the North circular in London, so the socialist government in Paris funded an innovative solution. Following the death of a bystander, a lady called Carole, they built a natty little circuit in 1979 near the airport and named it after her, allowing bikers to race for free in the safety of a dedicated venue. I’ve been coming to Paris for years and never knew this place even existed. Our route means driving through the middle of Paris in £100k of car that doesn’t belong to me. So we (see how I slip into the plural here, and the safety of collective responsibility) gaffer tape an Italian pendant to the front wing of the big QP, making the car look rather like a Diplomat’s ride. This works a treat. We safely scythe around the cobbled roundabout of the Arc d’Triomphe, past the mad traffic, beyond the Eiffel Tower and out of town. We remove the flag after the nice people at Maserati spot our bunga-bunga via this pic on out Twitter feed and (quite rightly) remind us to behave with their lovely machine. Sorry. Won’t happen again. 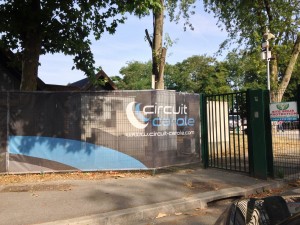 There’s an event at Carole and we had been asked by the only English speaker in the office to pay €500 in hard cash to film (!) I text my contact and ask him to keep an eye out for me so I can pay him on arrival, explaining I’m wearing “an orange shirt and a tartan kilt (Stewart clan)” so he can spot me easily. We park the distinctive Maserati around the back, climb over an embankment, and film for free while ignoring “I can’t see you?!?” text messages from thieving Pierre. The Carole circuit is a bit like Mallory park; Short, flat, nicely surfaced and perfect for bikes. It’s a pity cars can’t race here as it’s a great venue and provides a novel solution to illegal street racing. I would have loved to sling the Quattroporte round here. It has 530BHP from a twin turbo Ferrari-sourced V8 and great brakes. More about it on Maserati’s website here.

We don’t do conventional car reviews on MotorPunk, so before I end this feature I’ll give you an eight word appraisal of the Quattroporte, it is; Fangio in the front, Berlusconi in the back. 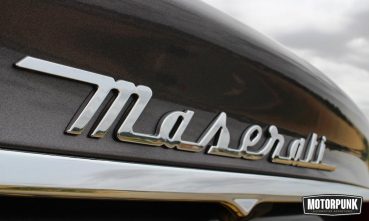 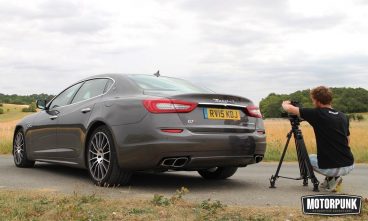 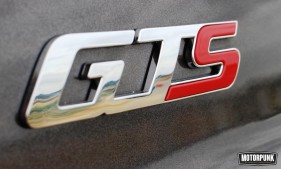 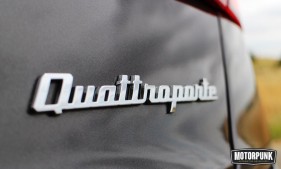 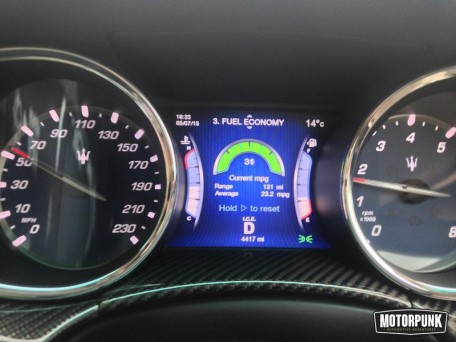 We can’t wait to share the finished film with you. Stand by for that. Next stop – Reims!