As the third part of filming our little roadtrip documentary about ‘France’s forgotten racetracks’ we visited the old Reims GP circuit. It’s a beautiful, semi-derelict site that has often appeared in print. Despite it’s obvious popularity few visitors do their homework, and if they’d poked about they would have uncovered quite a few surprises. As we did. Here’s the car, by the way, photographed from flat on my belly because everything looks good from this angle, right?

First, though, refreshment. After a frantic few days in and around Paris we drove an hour or so up the A4 AutoRoute to Reims and aimed for the Franken Pommery champagne house where  Mumm is made. The Maserati was made for roadtrips like this. Mumm Champagne has been awarded to the winners of F1 racing for many years. We were here to tell the story of how and when it started (Dan Gurney’s over-exuberance at Le Mans, 1967) and were lucky enough to get a private tour of the cellars underneath to film. Locked behind ancient iron gates were the actual bottles destined for the winners of 2015 and 2016 races, unlabelled, racks marked simply with chalk. It’s cold and damp down here and as we made boisterous jokes about Manor F1 while handling precious bottles in the gloom, groups of Asian tourists peered at us through the bars as if we were the exhibits. We would like to have bought a few bottles but our budget had been blown on fuelling our hard-drinking Quattroporte. We had a few beers in town, ate, then checked in to what TripAdvisor called “the dirtiest, noisiest hotel in Reims” and added to the dirt and noise. 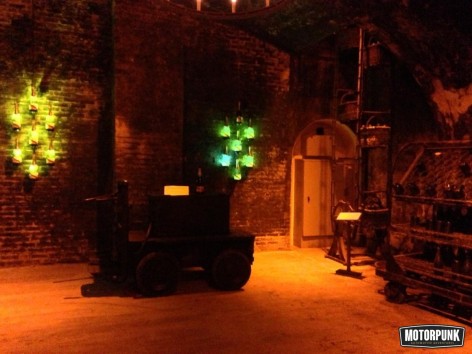 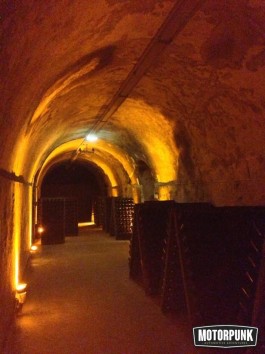 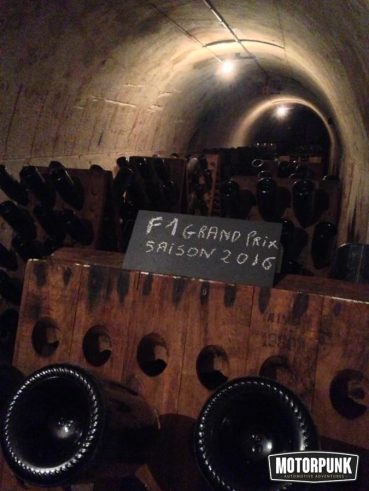 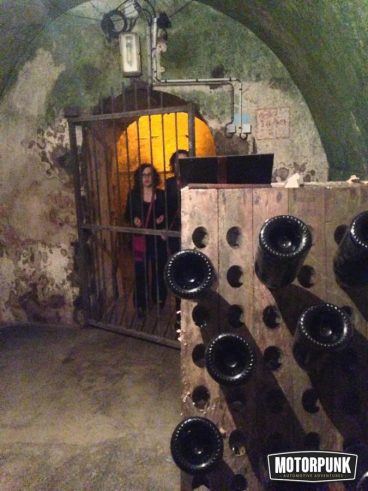 I love historic motorsport. The more I delve, the more thrilling it seems, a world away from the colourless, tyre-saving, fuel-managing, energy drink flogging drivel of today. With our documentary I really want to share the thrill of historic racing with viewers, to tell the stories of  heroism and calamity that took part across Europe in racing’s early days. There is no French GP today, yet France was the cradle of so much early racing. Azerbaijan, anyone? So many circuits were (and still are) public roads so with a tatty print-out of the Reims circuit from Wikipedia taped to the dash we aimed to benchmark our performance against Fangio, the lap-record holder here. 2 minutes, 27.8 seconds in an Alfa 159 set in 1951 on the third of four layouts of this circuit, below.

The start line is obvious, the circuit is a rough triangle laid out to encourage high speeds. The first corner (after a roundabout) is a right kink that now runs past a Police station. Originally it went behind the Police station, now a rough grass verge along a corn field, so we did the same, cameraman Matt bouncing about in the back of the car. Through the village of Gueuex there’s a little kink and a long curve over a brow, past a small cross where Luigi Musso died in his Ferrari in ’58, chasing the win he needed to clear his gambling debts. As we dwelled on that thought, thumping along with 523BHP shouting at us, the road stops. Dead. The original corner is now cornfield and a few tantalising metres ahead is the N31 AutoRoute, which formed another long straight. We executed a twelve-point turn and rejoined the circuit. 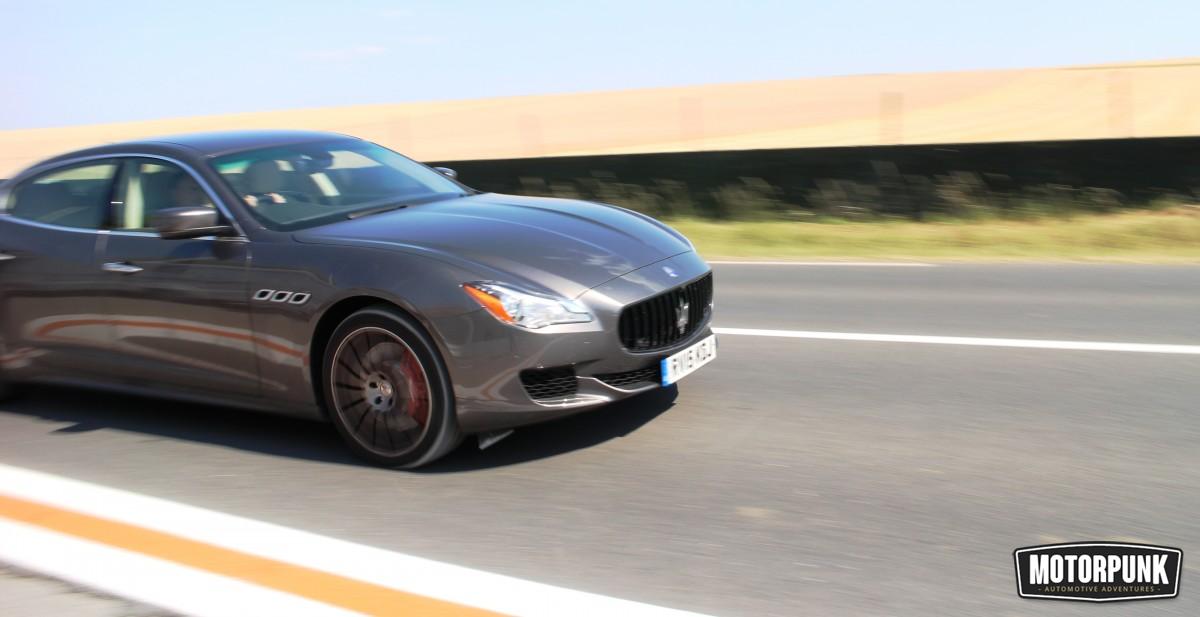 The QP will do 191MPH but until the road is rebuilt Fangio’s lap record will stand. I feel a prat comparing myself to Fangio when typing this, in an office, in wintery England, but when you’re thundering along in the French sunshine in a Quattroporte it’s difficult not to feel fantastic. This car makes you feel like Fangio in the front and Berlusconi in the back. 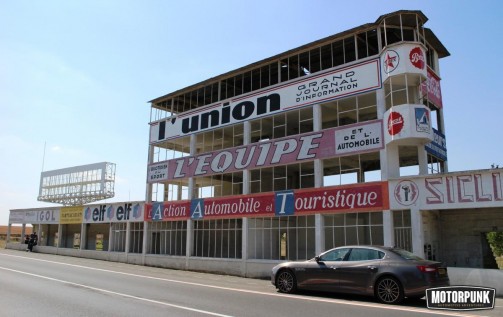 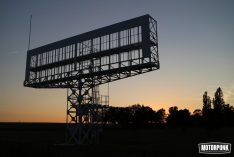 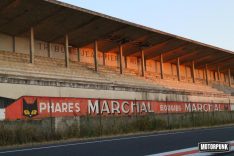 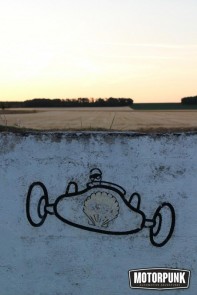 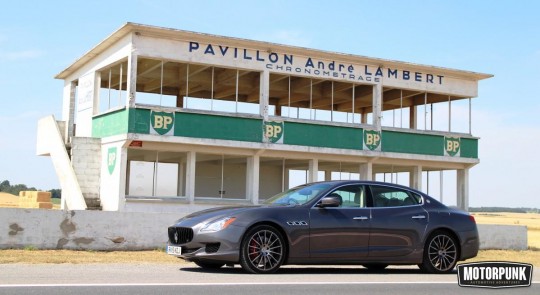 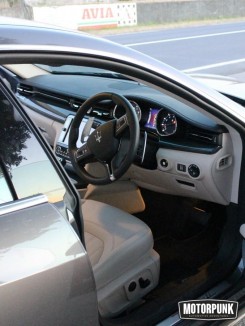 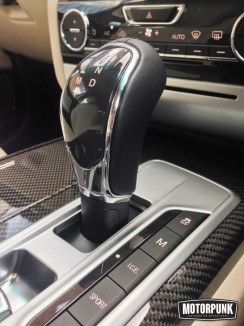 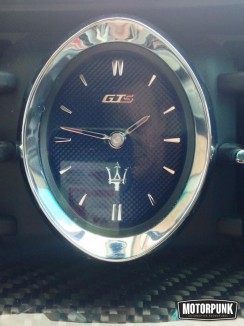 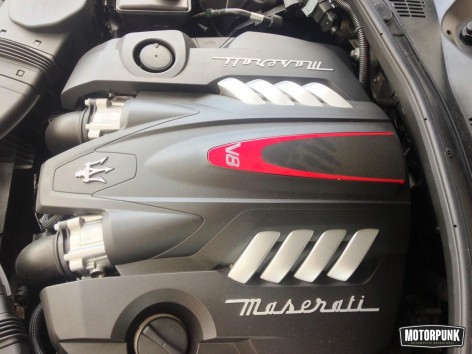 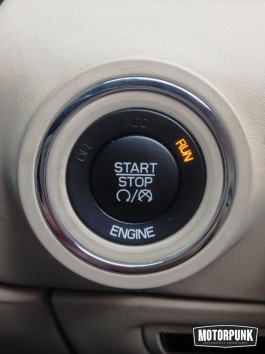 The tower and surrounding buildings here are beautiful. Visitors are discouraged from littering and the ‘friends of Gueuex circuit’ do a marvellous job of maintaining the place. The French Ford S-Max owners club had stickered one of the walls, though. They should be sent to watch F1 in Baku as punishment. There are so many fascinating names to be remembered here, Brabham, Brooks, Hawthorn and brilliant machines from the likes of Matra, Lotus and Cooper. So many stories. 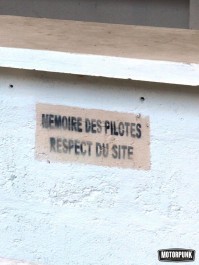 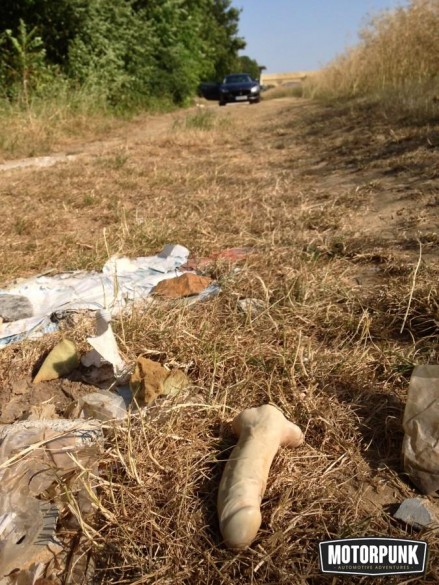 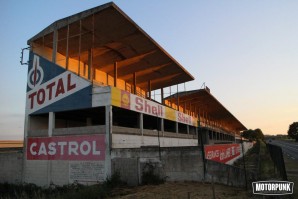 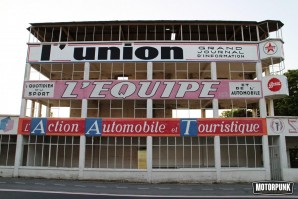 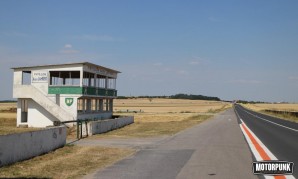 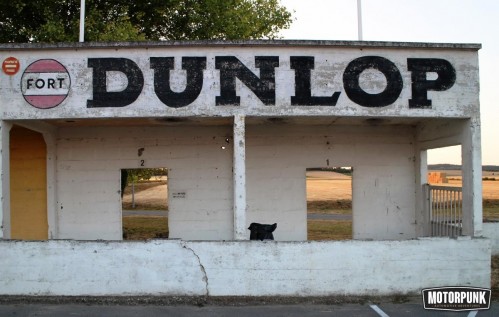 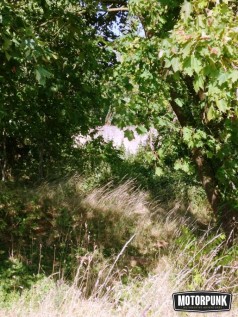 We had heard a rumour of something in the woods. Behind the tower, over what used to be the car park, through the bushes where the fairground and stalls once stood, is a chalky lane lined with brambles. Beyond this, pushing through the undergrowth, we found the remains of a tiny chapel. It was built to help bless superstitious drivers (and perhaps to help administer last rites). Racing ended here in ’66. Too fast. Too dangerous. There’s not much left of the chapel, just a bit of wall and what could have been an altar of sorts, all over-grown and nature is reclaiming everything. It’s a really beautiful place and we filmed a little piece and retraced our steps back towards the car. Stumbling on a rare piece of litter I bent down to pick it up and stopped just before I touched it. A huge, filthy and obviously broken sex-toy. I blame the French Ford S-Max owners club.

Pics and words by Rich Duisberg, with an honourable mention for fellow MotorPunks, Matt and Dr O, all pictured sloshed, below. Film to follow soon. 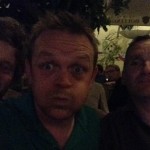