Apparently, the official collective noun for group of petrolheads is a Clarkson, and, if you’ve spent any length of time in one, you will know that to have any social standing amongst its hierarchy you’re usually expected to have first-hand knowledge of that most-famous motoring’ Mecca: the Nürburgring in Germany. Fact. Right? Well, we three chaps a MotorPunk HQ would tend to disagree.

While we’re always up for an automotive adventure we don’t see why we British should have to put up with the 1,000 mile slog to the Green Hell, and endure French tolls, Belgian radio or German cuisine, just to gain that particular badge of honour. Especially when one remembers that there’s a little-used 227 square-mile, English-speaking island, with toll-free derestricted roads, just a short ferry ride out of Liverpool.

In fact, the Isle of Man held the first Gordon Bennett and Tourist Trophy motorcar races in 1905; that’s more than twenty years before the Kaiser christened the ‘ring, which makes today’s TT course the world’s oldest motor-cycle racing circuit still in use. 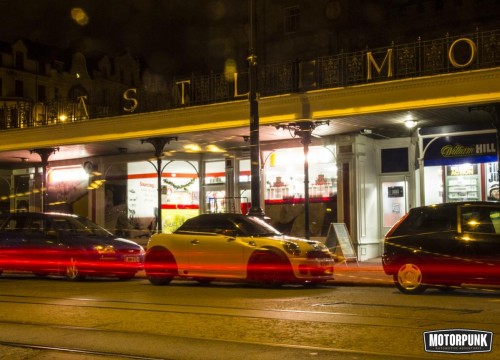 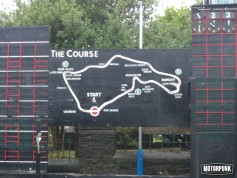 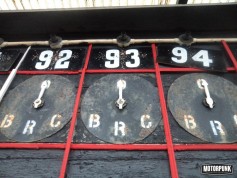 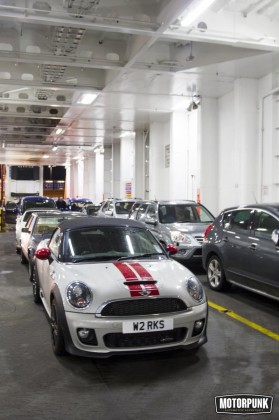 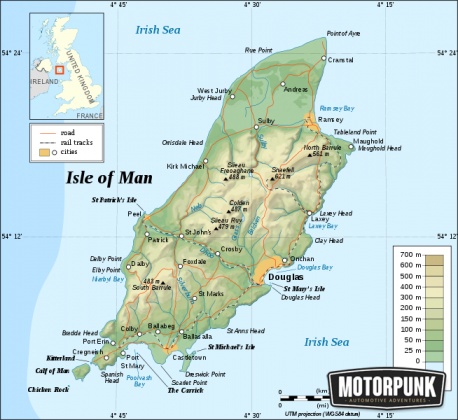 The Snaefell Mountain Course starts in the capital, Douglas, and takes a wide sweep to the west and north before entering the town of Ramsey on the north-east coast. It then returns to the starting point to form a 38 mile triangle of public road, taking in over 200 bends and climbing from sea level to an altitude of nearly 400m. By comparison, the 13 mile Nordschleife has only 160 turns and gains just 290m in elevation. If they ever make a pack of Top Trumps Driver’s Roads, then I know which card I’d want.

MINI UK’s Press Office had kindly loaned us their fully-loaded JCW Roadster, complete with W2 RKS reg’ plate, especially for this road trip, and in a town more used to hairy bikers, it turned a few heads as we parked up on the Prom’ late on the Tuesday. We’d also dragged along some of MotorPunk’s most persistent groupies to this damp self-governing British Crown Dependency: Camp Luke and his muse, Andy, had brought their slinky Alfa Romeo Spider while, in stark contrast, Rudge and Mikeyboy had nursed across their fragile Maserati 422 Biturbo with an interior looking (and smelling) like a pair of Peter Stringfellow’s underpants. The fourth car in our troupe was piloted by Carlos; the ex-Manx lad had jetted in to Douglas from Manchester and gamely rented an appliance-white Fiesta just to join the fun. After a few local ales, a fruitless hour in the Casino and a late-night a la carte snack of the famous Manx delicacy – chips, cheese and gravy – we called it a day, planning an early photo shoot at the crack of dawn. 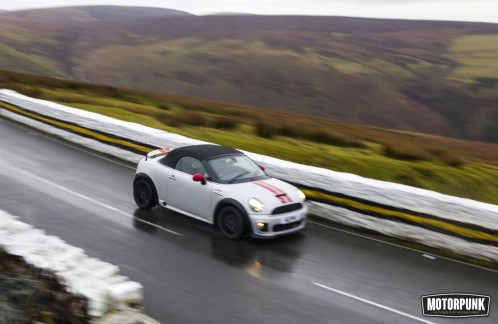 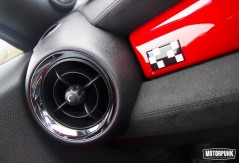 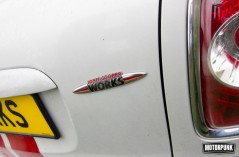 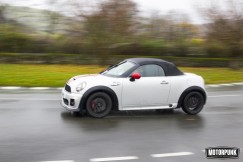 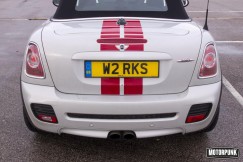 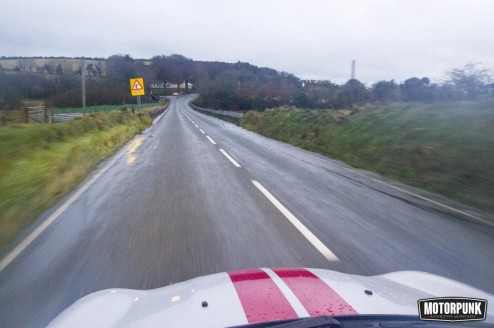 Unfortunately, nobody bothered to check the weather as we, and most of the UK, awoke on the Wednesday to torrential rain and gale-force winds, which now meant our afternoon ferry would be severely delayed. Marooned on Mann until the late evening we would just have to make the best of it – luckily for us, however, we’d brought toys to keep us occupied.

Once the Roadster’s sat-nav had got us out of Douglas following the TT’s course was a doddle; its entire 60km route is lined with black and white paint curbstones punctuated by deserted marshal huts. What does surprise you though, especially when you’ve seen footage of Guy martin and his ilk charging around the circuit, is how poor the road surface is. Even at a steady 30mph the pot holes and slap-dash road repairs made our Roadster fidget on its stiffened springs and 17-inch run-flats. Unbelievably, the TT record holder, John McGuinness, averaged this same ribbon of knackered tarmac at over 130mph.

With the rain now belting down, and 280Nm at the front wheels in overboost, we were pretty focussed on the road ahead and gripping the wheel with both hands. However, the new Dynamic Traction Control (with Electro’ Diff’ Lock) did a pretty good job of taming the JCW’s front end as we frequently lost grip on manhole covers, puddles and the island’s tramlines.

One piece of electro-wizardry we really liked was the much- employed Sport Button which gives a noticeably faster throttle response and sharpens up the steering. As the road opened up, and we could stop worrying about speed limits, we started enjoying the twin exhaust’s throaty rasp, embellished by JCW’s trademark burble on overrun.

Luke’s Alfa Spider tailing us was the Brera based car, not Hoffman’s classic, with a humble 2.2 litre four-pot in the nose, but it was gamely hanging on as we tore up the wet mountainside; his nervous navigator simply closed his eyes and clutched his manbag in terror. With RWD, ancient tyres, no traction control and colossal turbo-lag, Rudge, the Movember- ‘tached Yorkshireman, showed off his balls of Sheffield steel by charging his ageing piece of Italian exotica around the sodden circuit in hot pursuit. 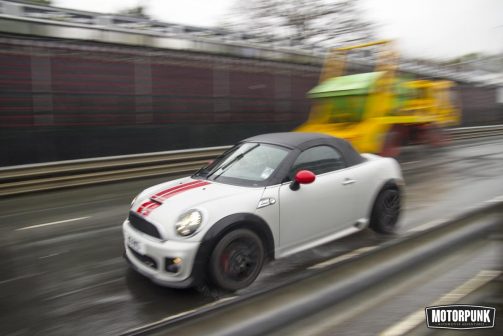 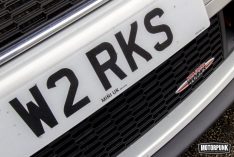 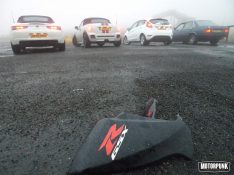 Unlike the UK there are no speed cameras on Mann’s rural A-roads. They’d be pointless, as there is no island-wide speed limit; after you pass the last ‘national speed limit’ sign there ceases to be any speed restriction at all. However, today we agreed that unleashing every one of the JCW’s 208 horses in the drizzle and thick fog of Snaefell Mountain would not have been very clever. Instead Rich suggested I popped on some borrowed waterproofs and stationed myself in a bridge in the driving ice-cold rain while he cranked up his heated Recaros for a few “flyby snaps”. Half an hour and thirty drive-bys later Rich finally stopped to collect me; hypothermic and soaked to the skin I’d long since stopped shooting – five minutes longer and I’d have been building a primitive shelter out of the nearby remnants of a shattered Suzuki GSX, Bear Grylls style.

The lack of speed limits, outside the villages, is liberating; as the speed builds, your focus is drawn to the ever tighter spot you’re aiming at and you take in less around you. The scariest thing is the proximity of walls, cottages and weather-beaten lumps of rock, sometimes just inches off your wing mirrors; if you think the runoff at the ‘ring is modest, then here it’s miniscule and often decorated with a wilted bunch of flowers and a soggy epitaph to someone who got it a bit wrong. In the past 105 years 237 people have been killed during official Isle of Man Tourist Trophy motorcycle races – sadly, Man trumps the Nürburgring yet again.

When you really hustle the Roadster you quickly realise that this is no ordinary MINI; throwing the car hard into corners you notice that lower centre of gravity and its greater “sports car” type handling. As a big fan of the “butched up” R56 JCW GP I wasn’t sure that I was going to like the look of its soft topped sibling. However, spec’d in White Silver, with black alloys and red racing stripes, I thought it looked pretty good. But, for me, it was the quality feel of the cockpit furniture that made the JCW Roadster such a special place to be; trimmed in swathes of leather and Alcantara, the interior was nicely set off by Chilli Red door and dashboard cappings, while the fabulous £2k Recaro seats grabbed you like a courting teenage gypsy.

By late afternoon we’d got in a couple of spirited traffic-free laps of the entire mountain circuit. After polishing off the last few corners – Brandish, Hillberry, Signpost Corner – we rendezvoused at the TT’s grandstand and start/finish line (ominously situated next to a large cemetery), where an old- school leaderboard still has old fashioned lap timing clocks and slots for riders’ names. Rudge sat out the weather in the comfort of his wonky Maserati; the seats, so he said, “were like sitting on a fat lass’s lap.” You couldn’t help but love it: ruched suede, a bonkers twin-turbo’d V6 and that famous oval clock that always seems to tell the time somewhere else.

So which car was best? Well, the Roadster was very good but I think I’d rather have Luke’s Alfa and trouser the change – that’s one seriously pretty car; if we were buying new then I think the Roadster faces major competition from the MX-5 – the Roadster JCW starts at about £25k; the hottest Mazda is about £3k less. I’d happily let Mrs. Octane get the Roadster JCW, but it’d have to be spec’d in a marginally manlier triple-black combo if I were a named driver on it; Rich, I know, would probably take a dozen dishevelled Mazzers instead. Actually, the comparison with an MX-5 is a good one to make; both have *ahem* metrosexual styling, but offer a fantastically rewarding drive without needing tons of BHP. We really, genuinely, loved the Roadster, but the roof stayed up even when the rain stopped … which tells you something, really.

If you haven’t already been, then I strongly suggest that you and your local Clarkson organise a roadtrip to the Isle of Man in 2014. In fact, the man himself was so taken with the place that he bought his own lighthouse on the island’s southern tip as a weekend retreat. Obviously, the absence of speed cameras, its derestricted roads, attractive tax breaks, fondness for fatty foods, independence from the EU and strict permit-controlled caravanning legislation meant it was always going to become JC’s favourite colonial outpost. With mid-week ferry tickets costing MINI-sized motors only £130 return, and seafront B&Bs starting at just £30 per night, it really is the sensible alternative to the over-hyped NüroDisney of our German cousins. Come on, fellas, “How hard can it be?” 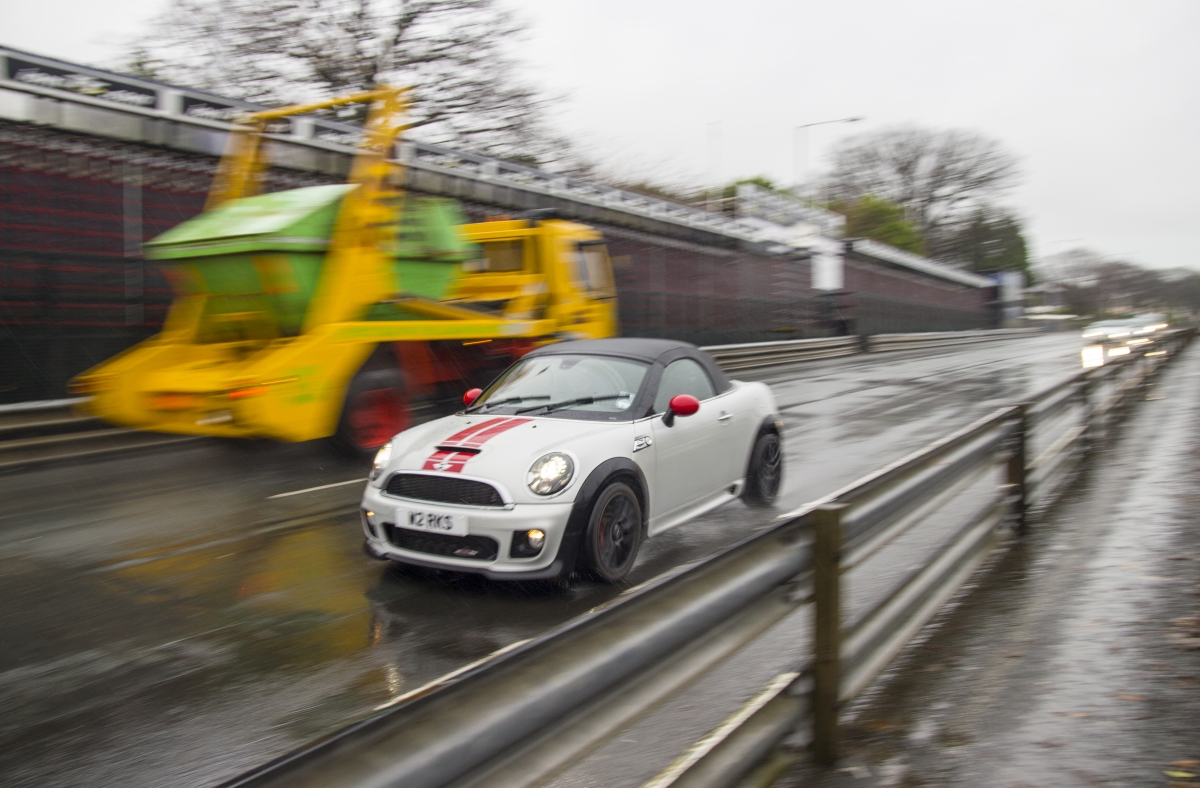