Simplicate and add lightness, said Colin Chapman. The new Exige S takes that ethos and adds a large dollop of power, 345 BHP to be exact, from a supercharged V6 stuffed in the back of a chassis with all the usual Hethel hallmarks. An amazing recipe. I was quite convinced that you could drive this car on the ceiling and fly a plane under it. MotorPunk’s resident boffins could do this digitally but why photoshop something you can do for real? I made some calls to friends and we met at an airfield in the Midlands. We’d fly a plane inverted with the car racing underneath and photograph the whole thing upside down, making it look like the car was stuck to the ceiling. This is a tenuous take on ‘simplicate and add lightness’ but, c’mon, what fun! 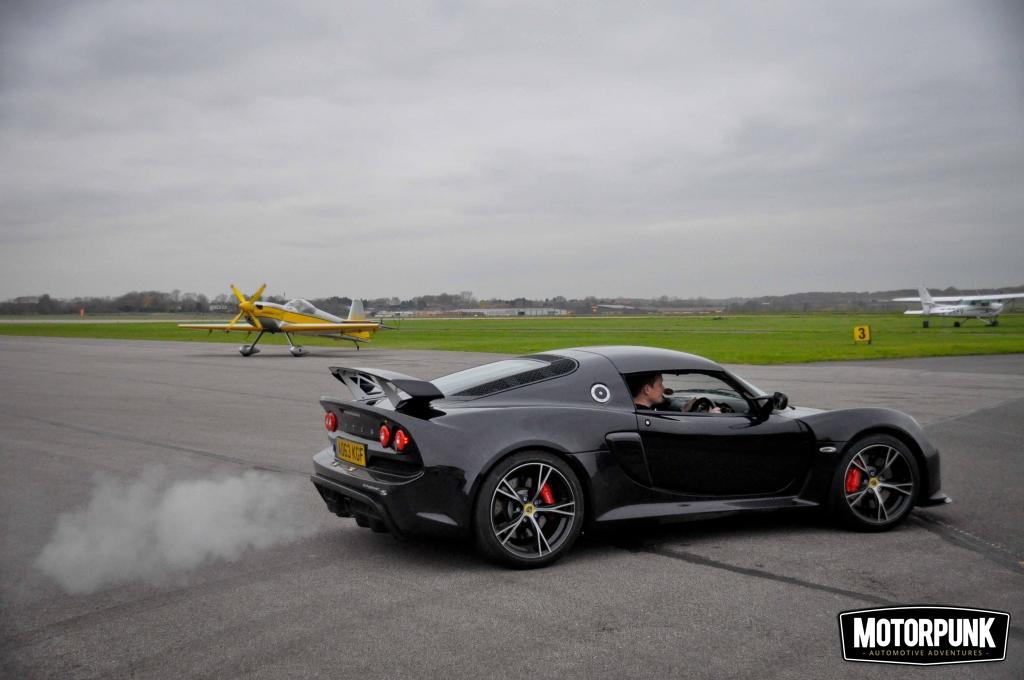 I had promised Lotus I wouldn’t crash their lovely car, the pilot promised not to crash the plane and the airfield owner promised to turn a blind eye to it all. However, the omens weren’t good when we arrived. An executive jet was taxiing on our tarmac and it was clear that we didn’t have the place to ourselves. Mr Airfield Owner wasn’t there and Mr HSE was. He wasn’t overly impressed with our risk assessment; “lots”. Nor our emergency plan; “run away”. These were not flippant responses, this is how we roll. Arranging these things relies on the goodwill and gung-ho attitude of like-minded people. There is no public liability insurance, no contingency plan and certainly no environmental policy. If we didn’t just wing it these things would never happen. As we stood in the control tower like naughty schoolboys listening to a lecture the radio burst into life. “I say! I haven’t got much fuel!” It was the pilot, Mr X, in his stunt plane. We did a quick sighting run up the runway in the Exige and outran the Porsche 911 camera car. The plane was approaching. 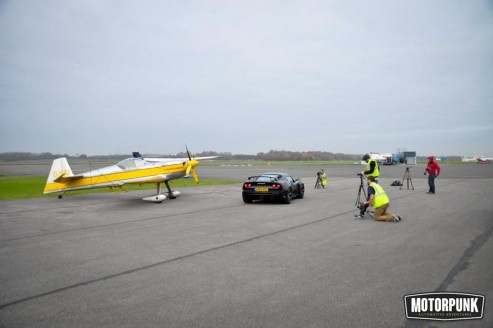 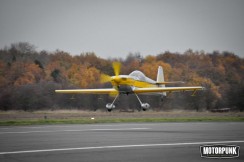 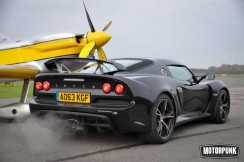 Ben was in the passenger seat juggling a camera, a phone and three walkie-talkies. One for the tower, one for the pilot and one for the cameramen stationed alongside the runway. As Mr X called in, Ben had to relay information to the team and I. As I pulled onto the runway I spotted the plane approaching and saw it flip upside down almost instantly. Ben’s job was to watch over his shoulder and give instructions to me to match our speeds. As the plane appeared over my shoulder I got carried away and just stood on the gas. Ben dropped everything and the kit clattered under the seats as we were pinned under acceleration. I had no idea where the plane was as we’d outrun it. I completely forgot about the braking point but stopped with enough space for a doughnut, just to get some heat into the tyres, you understand. From under the seat one radio hissed “Chaps! Slow down!” and another “get off the runway, NOW, there’s something trying to land!”We turned around, waited for a Cessna to come in, faffed with cameras and went again. This time we were well matched but as I got 2/3rds of the way down the runway I nearly ran over two cameramen who had wandered onto the tarmac for a closer view. The radio shouted again “get those men off the bloody runway!” 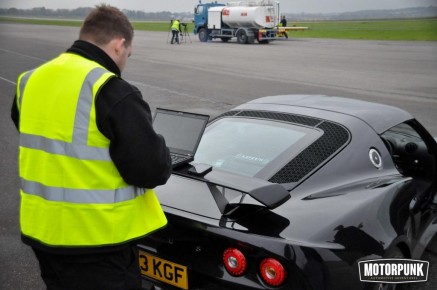 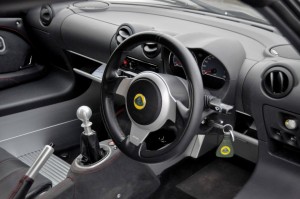 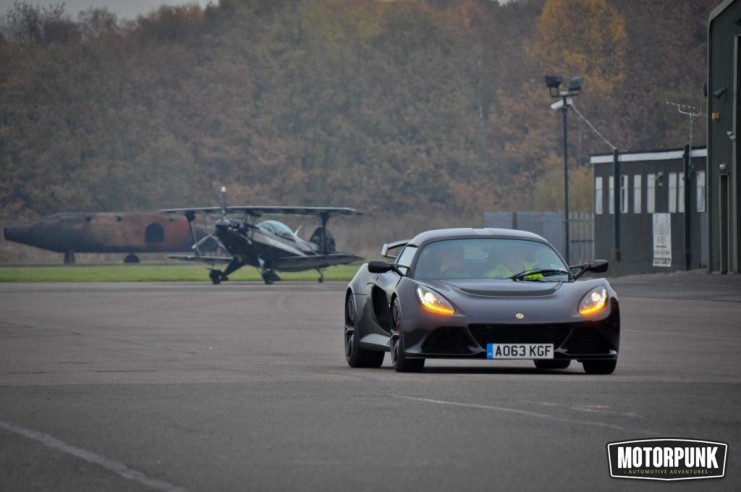 This Exige S is a splendid thing, the little manettino (a Ferrari inspired dial thingy) on the dash allows you to switch between Tour, Sport and Race modes with corresponding levels of electronic supervision. Lotus’s Matt Becker described how he’d asked Bosch how it works and was sent a fat manual which was too much to digest, but was pleased with the results anyway. This is one of the many reasons I love Lotus. They’re real people, no design by committee, no PR waffle just an honest commitment to produce cars with outstanding performance that bigger brands can’t touch. Every time we stopped people admired the Exige, asked questions and smiled. Even pilots vying for runway space, surprised at our presence, gave us the thumbs up. Time for another run. This time we nailed it. Out the passenger window I could see the plane upside down, Mr X hanging upside down in his harness, grinning back at us. Ben and I were laughing so loudly we couldn’t hear the walkie talkies. For a glorious moment we ran two abreast and as we hit the braking zone the pilot pushed down on the yoke and climbed away. Another doughnut. I could see the HSE man stood on a roof, binoculars in hand. We were called up for a proper old-fashioned bollocking. I promised him we’d try and behave and begged for one last run. 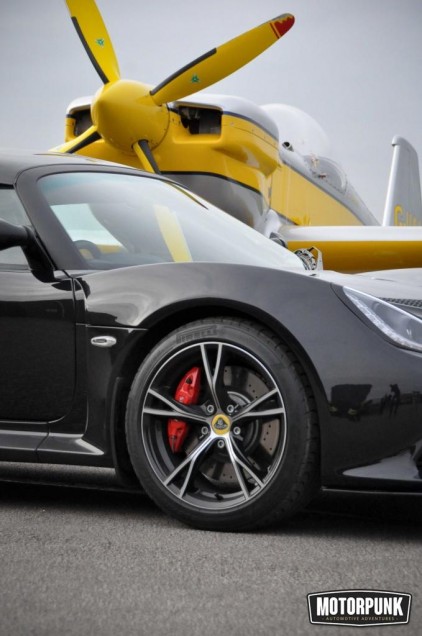 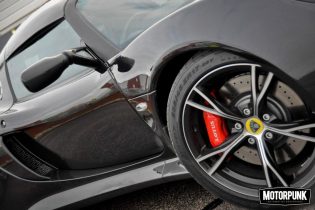 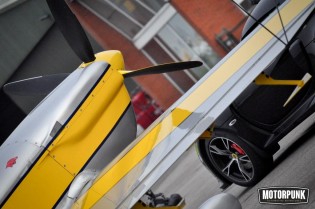 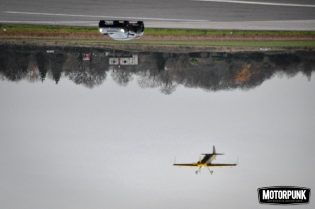 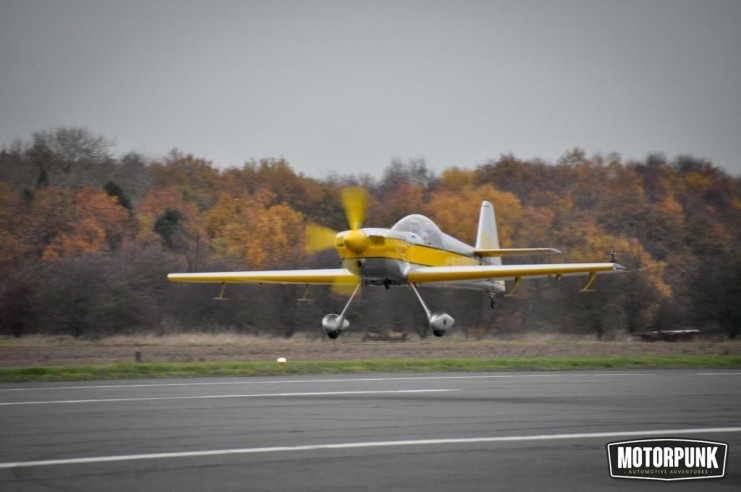 The car was sat on the runway and the stunt plane landed for refuelling. As we waited I noticed [name removed at their request], sat on the fuel bowser, amongst the haze of aviation fuel, and smoking a roll-up. I hardly dare turn my head to look up at the tower. The radio, inevitably, squawked “Enough! That’s enough!” Well, it was fun while it lasted. We were kicked off site. I hope that these pictures demonstrate ‘simplicate and add lightness’ ethos, but if not, we certainly had fun trying. The owner of the Porsche camera car is now looking for a late, low mileage supercharged Lotus and we’re looking for an airfield with no HSE Manager on site.