Rich follows in Hunter S Thompson’s footsteps with his own version of the cult classic; Fear and Loathing in Las Vegas

I had read the book. The cab collected me for the trip to London Heathrow and my driver was Warren, an old friend I last saw nearly 20 years ago, a pleasant surprise. I told him what I was up to. He hadn’t read the book. He hadn’t even heard of it. He told me about spending time with family in the Caribbean and eating fresh mango in the sunshine and we laughed about putting gravel down Clive Evan’s underpants at school. Clive’s now a second hand car salesman.

The M1 was hell. The M25 was hell. The Norwegian was waiting for me at Terminal 5 and we checked in, did the passport thing and stuffed ourselves aboard the American Airlines flight to Houston. Plastic bagged blankets and crap coffee. The Norwegian hadn’t read the book either but pretended to listen as I tried to explain cultural revolution, the quest for the American dream and the joy of a meandering roadtrip. He brightened up at the bit about sex, drugs and rock and roll. “This meal isn’t very big” he said. It looked like microwaved rabbit foetus served with Prit-stick cheese and cardboard crackers. Our Air Hostess was English, she poured the coffee under the watchful eye of a senior colleague,“You don’t want to drink this” she whispered. She was right.

George Bush Intercontinental airport offered queues, potato- shaped people in Polyester uniforms telling you where to stand and a rental car so bland I didn’t even take a picture. Hotel. Sleep. Wake up at 3am. Later we walked to the Waffle House. I just wanted some porridge, orange juice made from an orange, and a cup of tea with semi-skimmed milk and half a sugar. 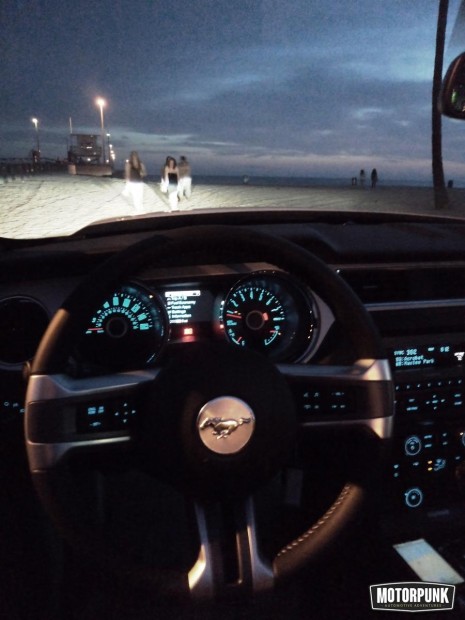 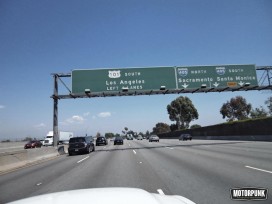 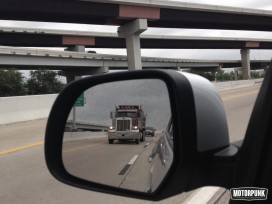 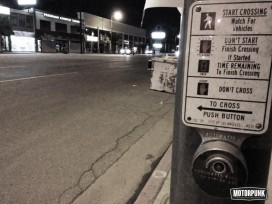 A woman in a smock stretched over her space-hopper figure looked really offended – “NO WAFFLES?!” her bug eyes nearly popped out of her fat face. I had waffles with “city ham”. No, I’ve no idea either. The Norwegian had the works. And my leftovers. “Small portions,” he said. Who is paying for this? Not MotorPunk. We listen to someone talk about wonky oil rigs for a bit and someone else picks up the bill. Then – the pub. No aperitifs, just 3 or 4 pints of synthetic lager and a beautifully snarky barmaid. Someone put Green Day on the juke box. She emptied her pot of tips into his hand and asked him to leave. She knew the beer was piss and gave us glasses of ‘Bald Knob’ Whiskey. It tastes exactly like winky. I Imagine. The Norwegian was thoroughly ‘in drink’ by now and had been cornered by a slightly-too-friendly chap with a DIY haircut and an iPad who wanted to show us pictures of his Lamborghini, yet only had pictures of his dog’s infected stitches. We left the peanuts. The Norwegian mentioned the American dream and was given precise instructions of where we could go to shoot a gun. And see Alligators. Sadly Mr Dog-stitches didn’t think it would be possible to combine the two. I’d had enough and the snarky barmaid rescued us. Try this place, she said and wrote down a list of other places to try: Catbirds, Royal Oak, The Anvil. Maybe she’d had enough of us.

A cab came, Patrick was the driver, strong Nigerian accent and loud radio in his Toyota minivan. The booze, humidity and tiredness were catching up on me and the Country music was like a mosquito in my head. The Norwegian complained,“You don’t like this rubbish, do you Patrick? Whatever you listen to at home – play that please”. We got Fela Kuti. Patrick beamed and he translated some of the lyrics. One I’d heard before; “water got no enemy” followed by one of Patrick’s favourites; “Woman! I’m going to beat you like you’ve been in an accident!” He laughed and repeated it in case we missed it. We tipped heavily and got out quick at Catbirds. A trendy place.

I am not a trendy person, the last time I tried trendy facial hair I looked like I’d glued pubes to my face. Not even my own pubes. A restorative G&T worked wonders for my mood. The trendy people in Catbirds were nice. We drank ‘Blonde Bombshell’ from cans and listened to a DJ play Edith Piaf. The Norwegian was convinced they were smaller than average cans and drank twice as many as me. We decided to walk back to the hotel, past a tattoo parlour and a creepy clapboard house with a fortune teller’s sign outside and an orange Dodge Charger round the back. There were homeless people with their world in a shopping trolley. I didn’t want to ask them about the American dream in case they thought I was being a smart-arse. No bar at the Hotel. No minibar in the room. No nightcap. We checked out of the hotel the following morning. On a back road to the airport there was a large rundown shop selling Cowboy stuff and the Norwegian, a bit brittle from the night before, decided that the American dream might be something you wear.

The shop was large, stocked with every bit of yee-ha attire you can imagine. A hands-on fifty something female shop assistant (Cowgirl? Cow-woman? Cow-cougar?) showed us around. Saddles, shirts, jeans, boots, spurs and lots of hats. The Norwegian tried on most of the hats and insisted on me appraising every single one for style, fit and “American dream-ness”, before buying one. I think he already has a gun at home. And then off to the airport in our economy saloon car, Norwegian in his hat, me in the only pair of jeans I own, looking like a pair of rejects from a Brokeback Mountain casting couch. 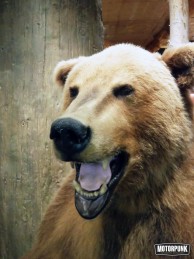 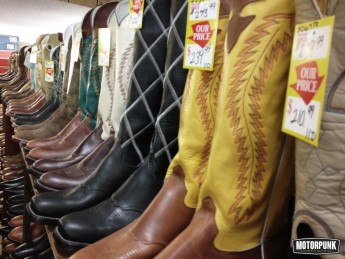 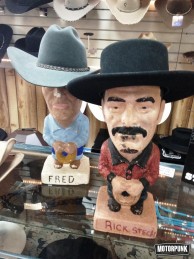 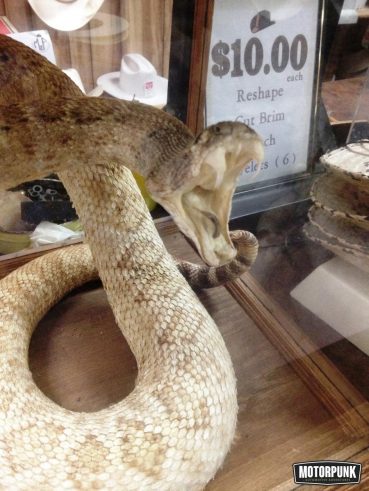 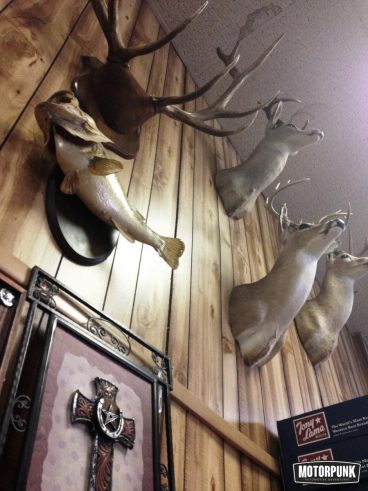 Houston to LAX airport. Two hours lost (gained?) and humidity. For not very much money Hertz will rent you a Mustang. Mine was a white Cabriolet, a V6 engine mated to an automatic gearbox that sounded (I imagine) like the Cow-Cougar woman having an oversquare poo. Exiting the airport we got a bit disorientated and drove through a suburb called Compton, which I recall from the an NWA track “Straight outta [sic] Compton” which includes the lyrics “crazy mother*****r named Ice Cube”. Mr Cube should call NHS direct; they can do wonders for those suffering with mental health issues, I’m told. I put the roof up. Happily we never got to meet Mr Cube or any of his ilk, and went up the coast and listened to someone talk about their wonky oil rig instead. Then, to an English Pub for bottled Budweiser with Tequila chasers beneath a Greek flag hung upside down and a massive screen showing baseball, just like we do in England. Baseball, what a pointless sport, a kind of cricket with the aim of running around in the dirt back to where you started, played in pyjamas by portly Hispanics with draught excluder moustaches. I asked the Barman what makes this an English pub and after about 3 minutes of gob-open thinking he pointed at a dartboard in the corner. Time to go. Where do we find the American dream around here? There were two suggestions from boozing locals, the first being to visit a winery, which the Norwegian (being a connoisseur of all things alcoholic) sniffed at. Wrong kind of terrior, apparently. The second suggestion was to take a budget flight to Vegas. We’d had quite enough budget flying, thank you very much, and looked at a map. It didn’t look far and we had a Mustang. An early night would be the sensible thing to do, so we sat drinking Bud until the small hours and got what felt like 30 seconds sleep before throwing luggage into the boot, taking care not to crush the Norwegian’s Cowboy hat.

America is a big place. The less charming Americans tell you that England (The UK/ London/Scotland/Great Britain, it’s all the same to them) will fit 12 times into their lunch box.

With the Norwegian at the helm we bounded down the Pacific Coast Highway, a beautiful road, and before turning inland we stopped at a pretty beach, accessed by crossing a broken fence and a railway track. The Norwegian had a swim. I had a paddle. My shins were blistering in the heat. I called my Dad to tell him I was standing in the Pacific. “The last Duisberg to visit the Pacific was there to shoot Japs”, he said, before ringing off as he had to get to the tip before it closed. Back in the car, through LA’s suburban slums and then east towards Las Vegas. It didn’t look far on the tatty map in the pub a few hours before. A Camaro was following us. Probably going the same way. We pulled off the highway and back on again. 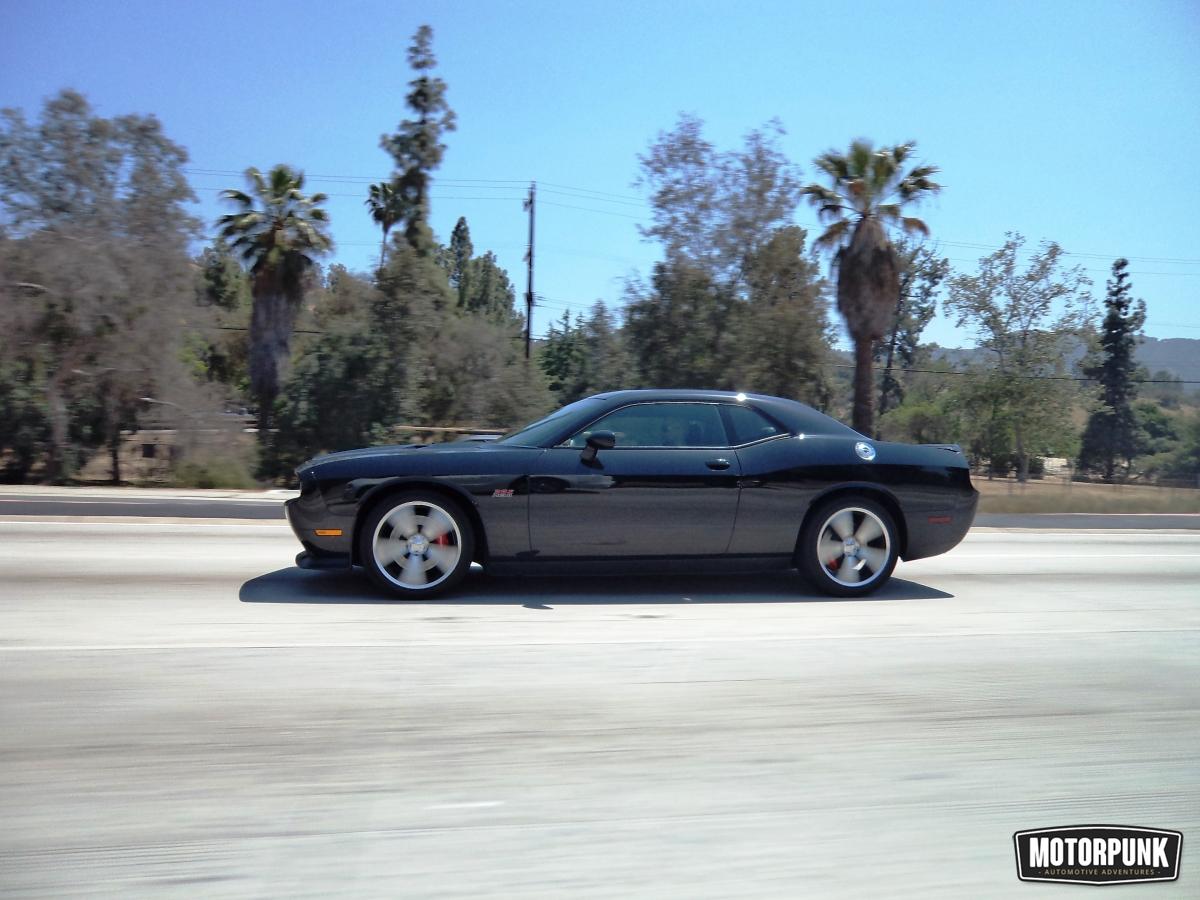 He did the same. We wound the Mustang up a few MPH. He did the same. It was now bloody hot, 42 degrees, but having paid for a cabriolet we were not going to have the roof up unless absolutely necessary. We’d run out of cash and our last few cents went on a small bottle of water to share. The Norwegian was tetchy. He was struggling to understand my explanation of ‘washback’. Also his hat had got a bit squashed the night before, I suspect he had slept in it, he thought I had sat on it. Either could be true. The black Camaro sat about 200 metres behind us. Single occupant. Policeman? My iPhone told us we still had four hours drive to Vegas before packing up as it had got too hot. The Camaro thankfully vanished. 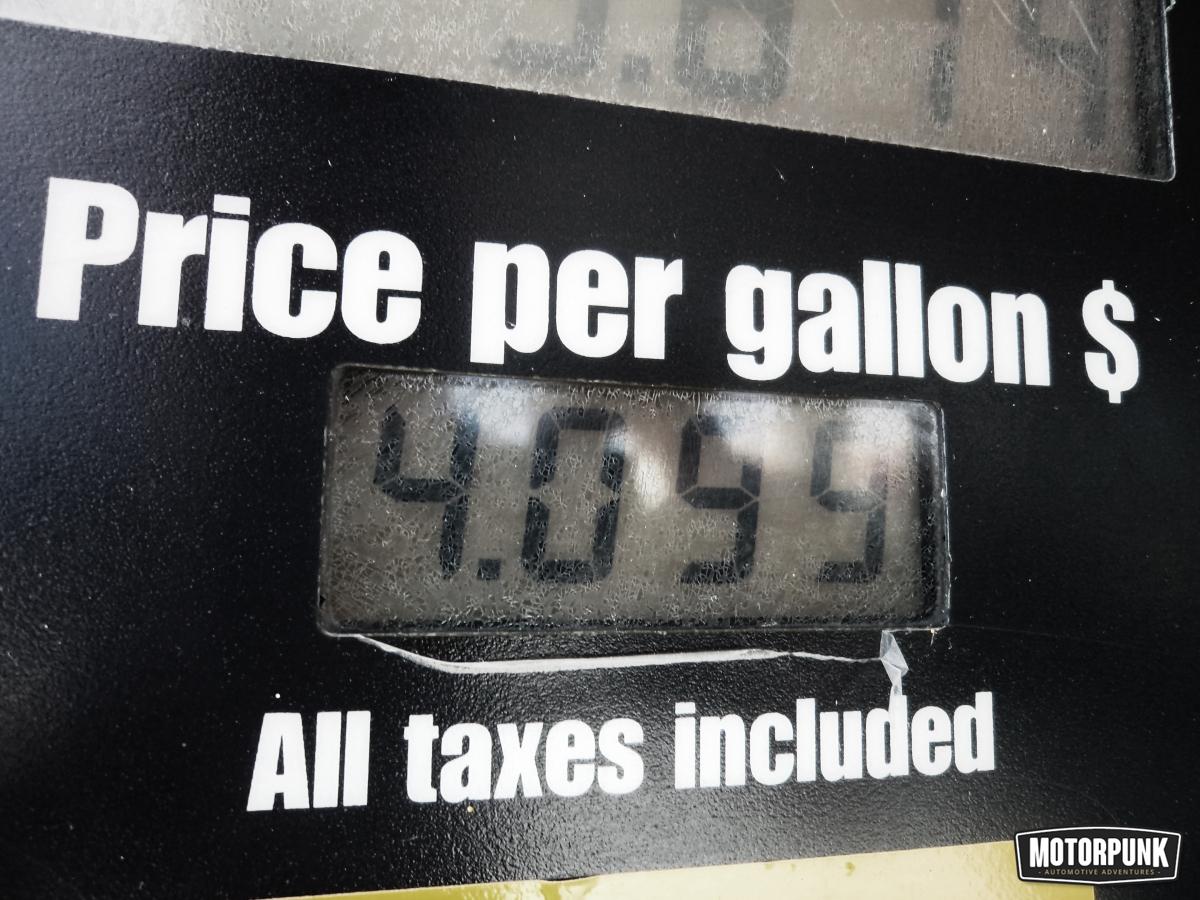 We needed petrol and found what seemed like the only petrol station for miles. Pull up at the pumps, open the flap, click. Nothing. Card in the machine. Nothing. Inside the shop for help. The harridan behind the counter had the complexion of a five pound note that’s twice been through the wash. I’ll spare you the full transcript of the very strained conversation, but it seems that you have to pre-pay a fixed amount for your petrol (back to the car for your passport as they don’t accept cards without ID), fill your car to that amount or less, then back to the desk where fiver-face then credits your card if you’ve used less fuel than you’ve prepaid. This is complex enough without a hangover and mild dehydration, but I have no idea of the cost of fuel in California in real money, nor how big the Mustang’s tank is, and politely asking her for “fifty quid’s worth, please love” did me no good whatsoever. The Norwegian had fallen asleep. I drank some of the water and poured the rest on his hat. My turn to drive. 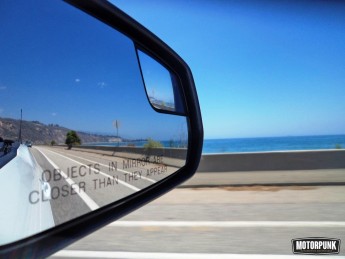 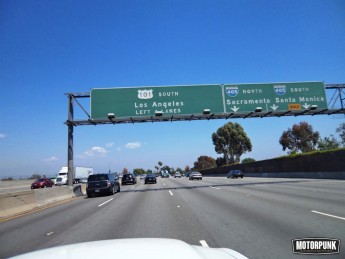 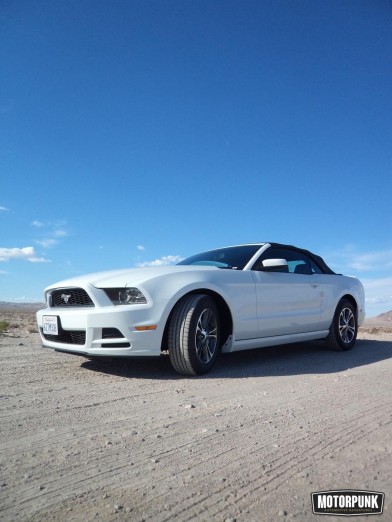 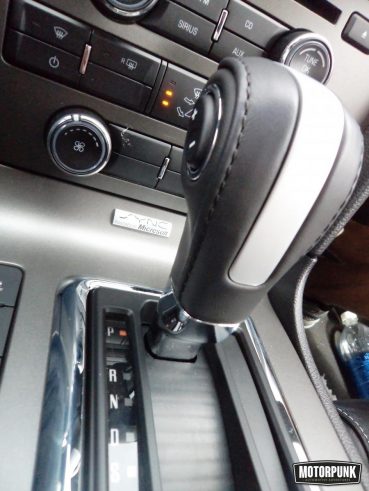 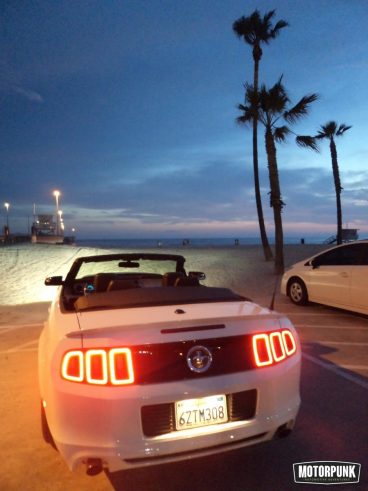 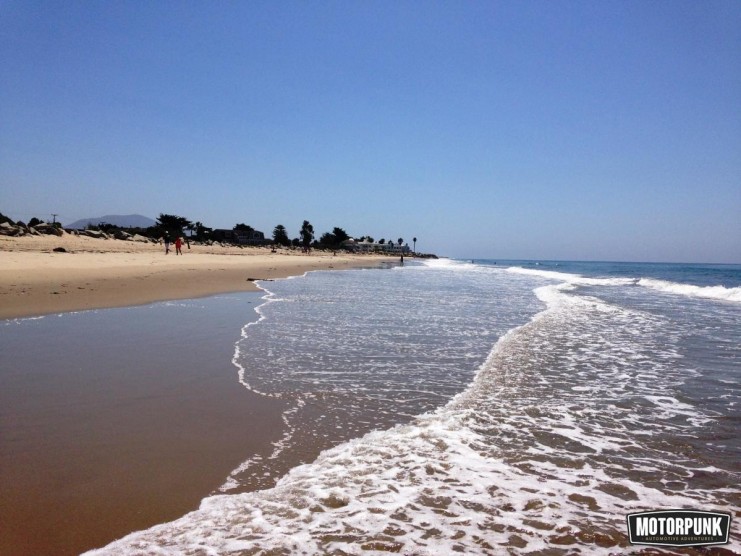 MotorPunk doesn’t do car reviews, one man’s Mustang is another man’s donkey, but I ought to say a few words about it. As you’d expect, the V6 is slow and it changes direction as gingerly as John Prescott leaving a buffet table with plates full of scotch eggs in each hand. It has an electric roof, huge cupholders, an automatic box with manual over-ride (that somehow makes it worse) and very good air conditioning. There’s a menu on the dash offering ‘track apps’, you can record 0-60 mph and 1⁄4 mile times. It’s no VBox. Middle America aspires to this car, so I’m told and as a roadtrip motor it makes perfect sense, even if this roadtrip itself doesn’t make any sense. Yet.