Filming stuff is fun. It also seems to give us more clout when attempting to blag things than our standard “we’re an internet magazine who sometimes end up in print, this isn’t my real name, we’ve got a few points on our licences, please let us borrow your XYZ to muck about in” kind of email. We had attempted to book use of the Nürburgring before but, frankly, they were having none of it. I can’t blame them; we’re not the best of blaggers. This time, though, when the people who hold the keys to Europe’s most revered racetrack read our outrageously confident email, they agreed to let us have a few hours exclusive playtime on their hallowed tarmac. The fact that we had a film crew along obviously had some clout, even though our crew only actually consisted of a one man, XCAR’s tireless Nick. The mention of Senna, the anniversary of the opening of the ‘ring’s GP circuit, and Mercedes might have helped too. Here’s what happened;

Senna died at Imola 20 years previously and it was fairly obvious that print mags would run endless features on the minutiae of his fatal crash, interview everyone from Frank Williams’ wheelchair maintenance man to confused Italian HSE Managers to try and find a new angle on an old story. All this seemed a bit obvious and a bit dour to me. I wanted to celebrate the man, not dwell on his death, and noted that 10 years prior to the crash he announced his arrival on the race scene by participating in the race of champions. Mercedes had given one of their new 190E 2.3 16V Cosworths to each of greatest living F1 drivers and invited them to a race to celebrate the opening of the new ‘ring GP circuit. They all turned up, they all got spanked by a relatively unknown Brazilian, Ayrton Senna. So, I thought that would be a fun thing to film, and sent a few optimistic emails. The ‘ring people agreed to let us film for 3 hours, friend of MotorPunk, Ben at Shark Performance, agreed to come along in his Merc Cosworth. Nick stuffed his Ibiza full of camera kit and we set off for Germany. 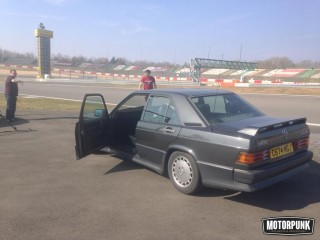 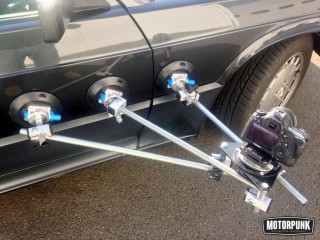 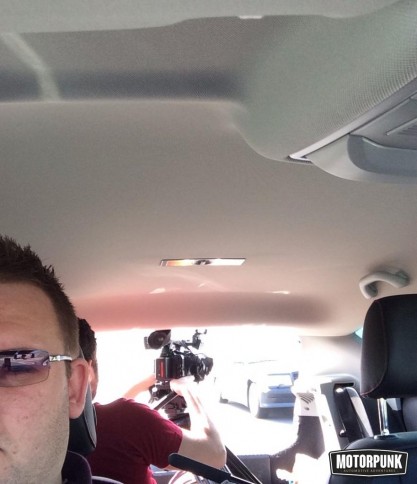 It didn’t immediately go to plan. I was stuck in a meeting in London and couldn’t escape until rush hour, meeting Nick and his rammed Seat, for a crawl through east London in horrible traffic. Ben called to say that the Merc wasn’t running, something involving ECUs, the wrong number of cylinders and “lying bastard eBay sellers”. I don’t speak spanner but it sounded serious. Nick and I slogged across the south east and hung about in a Calais lorry park like a pair of wannabe immigrants. Eventually, in the middle of the night, the Merscabies (as it had now been christened) hove into view and we raced across Belgium and into bed at 2am, ready for a 6am start. 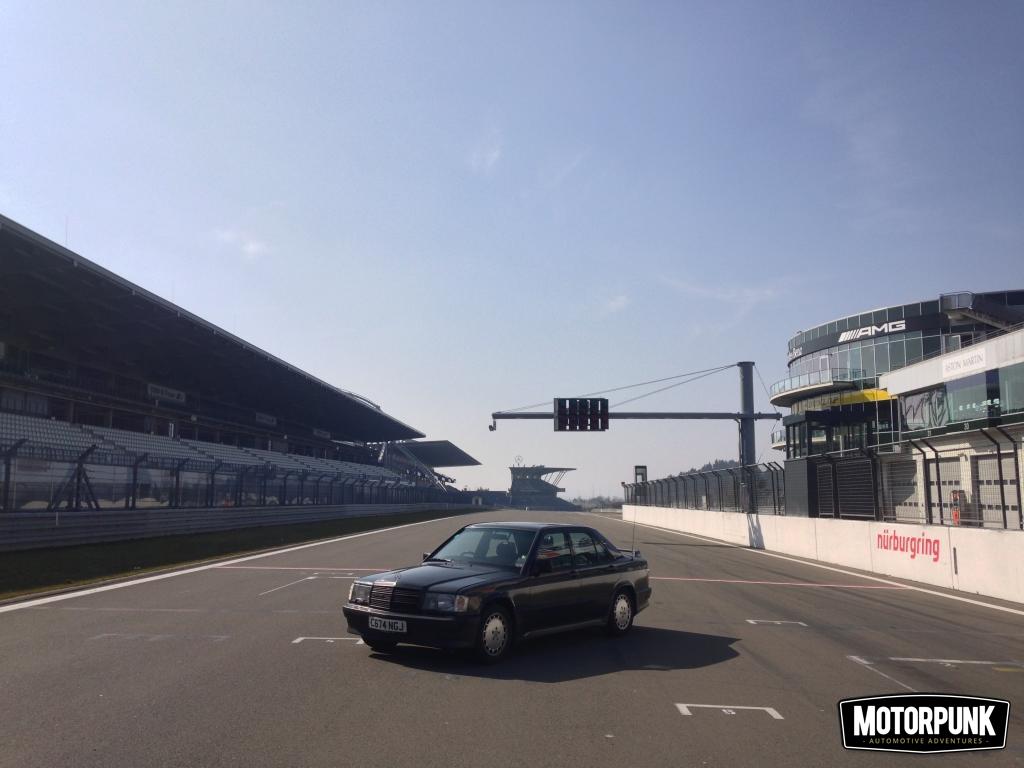 I look knackered most of the time. I look doubly knackered after a long drive and a few hours sleep. One of our YouTube viewers later described me as looking like Gordon Ramsay. I think that’s a fair description. Up early we had a safety briefing and Nick plonked himself on an apex and encouraged us to drive our slightly baggy Merc as close to him as possible at the highest speed we could. Dr O took the wheel. Nick is a cool chap. He never even flintched as Dr O nigh-on took his toes off on the first attempt. We then got a bollocking from the ‘ring’s safety man. Because of time we had to film in two directions, this meant setting the cameras up in one spot, then repeatedly driving past it, u-turning on track, and driving past again. This was your get multiple angles from the same spot and it’s quicker than moving all the camera kit. It also means that internet pedants point out we are driving the wrong way round the track. Partly because I have a crap memory and partly because I am also a crap presenter I like to have post-it notes stuck to the inside of the windscreen with script prompts. With these and a bulky cameras strapped inside focusing on my wrinkled fizzog, it is hard to see to drive. It’s like burqa-vision, peering through a slit, careering around corners trying not to maim the cameraman. All good fun. The German in the safety car (a cooking Jag XF estate) must have questioned his boss having granted permission for us to film this nonsense and repeatedly told us to behave. We repeatedly ignored him. 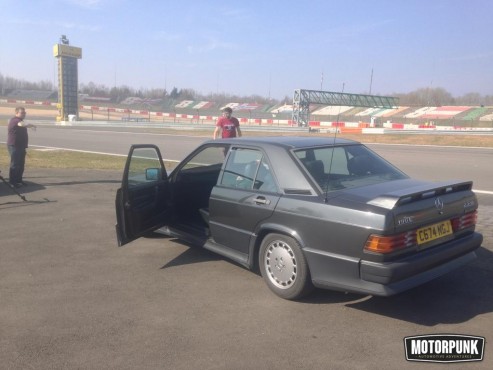 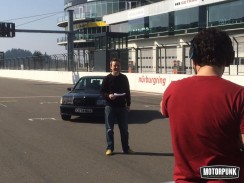 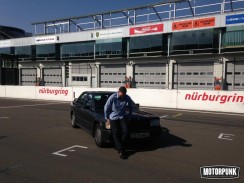 As a thank you to the ‘ring staff for allowing us to film we had agreed to interview them about the anniversary of the track opening as part of our feature. It was a bit awkward as they had just changed owners and there was an air of uncertainty about the place. It was doubly awkward when my pre-planned joke fell flat. I had bought them a birthday cake and invited them to blow the candles out. I then told them it was €5000 a metre for candle repairs plus €10000 for cleaning the plate up. Aw, c’mon, we’ve all had a few big bills like that at the ‘ring, right? No-one laughed. Dr O looked at our sad Lidl birthday cake and asked if anyone owned a dog. Everyone laughed. That footage will (hopefully) never see the light of day. We ended with the obligatory trip to Pistonklause for steak, beer and tales of Senna. There is no doubting his incredible talent as a driver, but he was no saint, despite his religious references. The real winner of the race of champions was Lauda, starting at the back and finishing second, and having put his energies into convincing the authorities into making a safer racetrack at a time when many were against it. Merc had built two cars for him, anticipating a win, so they could show one of his two cars in their museum. Senna’s car is still on display now. The Merscabies is no M3 but it is hugely entertaining to drive, dogleg ‘box, raspy 4 pot, etch-a-sketch styling and houndstooth trim in the cabin. We love cars like this and are happy to learn that is has since passed into the ownership of Mike Shaw, who will no doubt love it as much as it’s previous 19 owners did, and we look forward to seeing it on the 3rd annual “Car Club 18-30” trackday later this year. Our long hard roadtrip was well worth it, for the fun of hooning one of our all time favourite cars round a track and as a way of remembering one of our all time favourite drivers.

The video? Watch it here.