Roadtrip features are usually fairly easy to write: a half decent set of wheels and a tenuous excuse to clock up some miles somewhere interesting. There’s usually a scrape of some kind and a little bit of rule-bending but we’re always back in time for last orders with a tale to tell. This roadtrip doesn’t fit this format for two reasons: firstly, this roadtrip was actually planned as a video feature; this written piece is merely a prelude to an XCAR video written and presented by both myself and Dr Octane. Neither of us have done this before and to add further pressure the subject matter is a little sensitive. The second; This is the story of Albert Ball, one of Morgan cars’ early customers and a man who gave his life in the First World War. Darryl and I had decided to take a trip in a Morgan 3 wheeler from Albert’s hometown of Nottingham to his place of rest in Anoeullin in France and lay a wreath to show our respect. An appropriate way to pay our respects in time for Remembrance Sunday, we hope you agree. 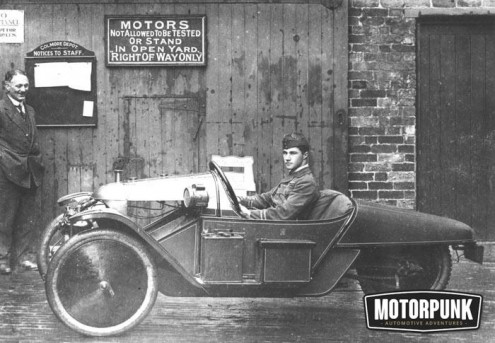 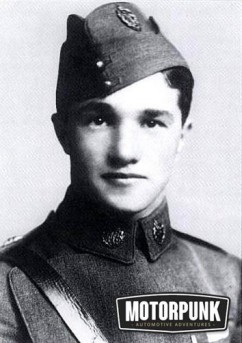 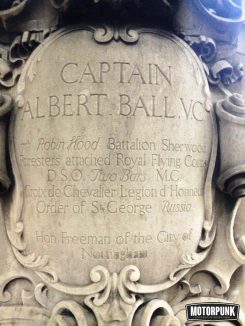 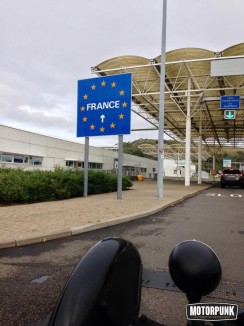 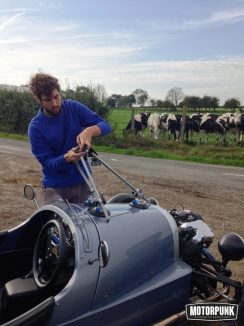 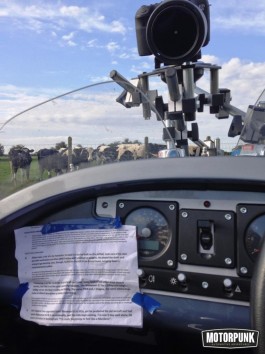 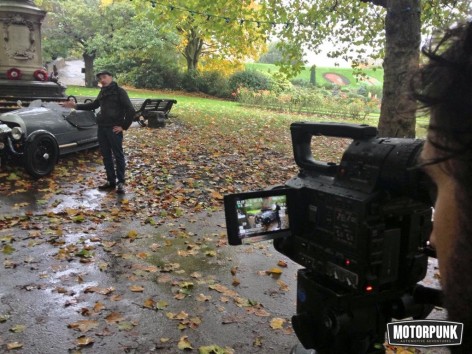 There’s a statue of Albert Ball in the grounds of Nottingham Castle which seems an appropriate place to start the story, and our roadtrip. Albert Ball was born 117 years ago in Nottingham, the son of a man who went on to be Lord Mayor of Nottingham and a Director of Austin Cars, and it is fair to say he had a fairly comfortable childhood. As the First World War broke out he joined the Sherwood Foresters and found himself in a training role. Writing to his parents he commented: “I have just sent five boys to France, and I hear that they will be in the firing line on Monday. It is just my luck to be unable to go”.

Cameraman Nick eventually gets the footage he needs of us doing this intro, and my word it is hard to recite to camera words you’ve written yourself without forgetting chunks of it or having a workman in high-vis vest wander into shot. And it’s raining. We pick up a wreath and stow it in the handy little trunk on the back of the M3W and as we’re about to squeeze out through the castle gates the BBC turn up and ask us for a few words on our trip. We are now running late. The producer woman politely asks for a passenger ride as she loves the moggy, so we drive around the gardens of Nottingham Castle in the pouring rain while she whoops approval. 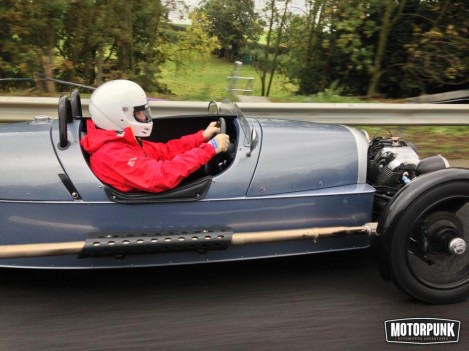 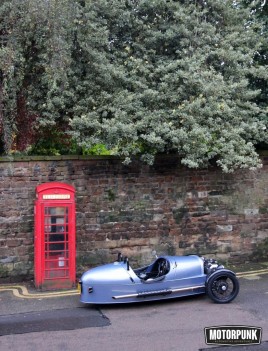 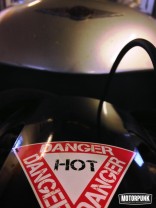 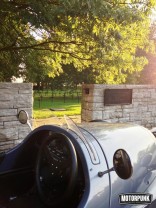 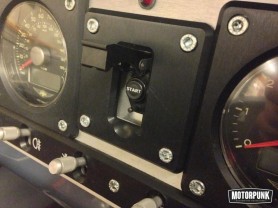 We are now very late for our Eurotunnel crossing to France. This car has been reviewed a hundred times and there’s not much we can add to the unanimous praise. Despite the sombre nature of our mission it is impossible not to smile as you drive it; tourists wave and take snaps and the V-twin thump-thumps us out of the city and down the M1, off to France, in the rain.

Albert Ball was determined to see action. He got up at 3am in order to grab some private flying lessons before starting his military duties at 6.45am each day. He wasn’t a natural but finally got transferred to the Royal Flying Corp, the forerunner of the RAF, and was posted to 13 Squadron in France in February 1916. The M3W might look a dainty thing on the motorway but there’s little fear of being swiped by a narcoleptic trucker as the Morgan catches everyone’s eye and it really belts along. The rain gets in everywhere. I’m wearing two coats and am soaked to the skin but I am smiling like a toothpaste ad. White van men wave and traffic gives way everywhere. This is a special little vehicle but it was chosen for this trip for a very specific reason. As Albert Ball graduated to fly Nieuport 17s he bought his special Grand-Prix bodied Morgan 3 wheeled sports car. He famously said: “to drive this car was the nearest thing to flying without leaving the ground.” This is no lazy cliché as the stats bear this out: they both weigh c.560Kg, both have c.115BHP and therefore the same power to weight ratio. Even the top speed is almost the same, at around 115MPH. Our 3 Wheeler, despite being new, is a primitive, exhilarating and uplifting thing to drive. Utterly sodden I change with Dr Octane who had been tweeting our progress from the warmth of the XCAR support vehicle and we arrive late, but not too late, at the Eurotunnel.

In France Albert Ball slowly acclimatised to the conditions, preferring to sleep in a tent on the airfield as opposed to the bawdy atmosphere of the barracks. As a Christian who enjoyed gardening and playing the violin he made an unlikely war hero. But that is what he became. The kills started to add up and he wrote home telling his parents, “Men tons better than I go in hundreds every day”. He preferred to fly and fight alone, winning the Military Cross, then a promotion to Captain. Shortly after his twentieth birthday he had 31 kills to his name and the glory of war had worn thin; after one spell, where he downed seven enemy aircraft in just five days, he wrote to his father, “I’m really beginning to feel like a murderer”. Yet he was fêted as a hero at home. The British Government had seen the horrors of the Somme and wanted some positive PR. Albert Ball was the man. Quiet, modest and highly successful he was just what they wanted. He didn’t understand or appreciate the attention. Attrition rates were horrific in the air as they were on the ground. Pilots weren’t given parachutes as it was felt they would bail out instead of attempting to return damaged aircraft. The average life expectancy of a new pilot in 1917 was 11 days. Captain Ball had now been in France for nearly a year. 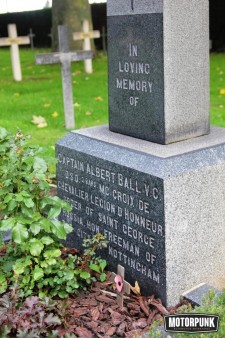 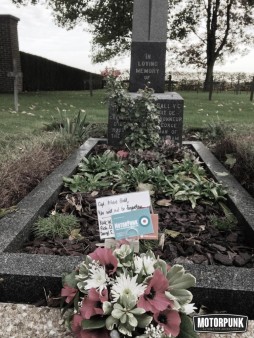 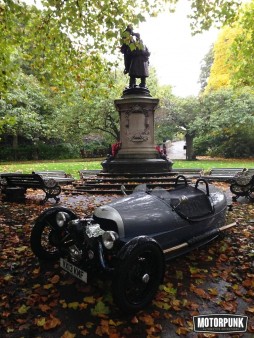 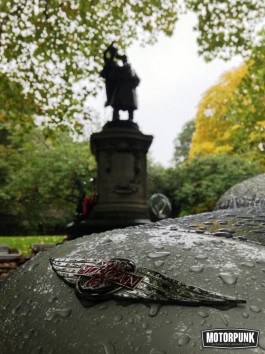 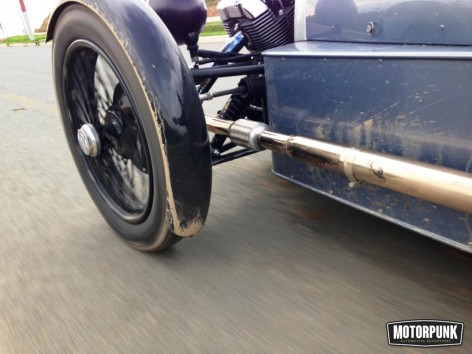 Calais is as grim as ever but French motorways are excellent. We throw a few euros into the toll booth basket and roar along, leaving the perfectly maintained highways near Lens to cut cross country to Annœullin where the Ball story comes to its conclusion. The Mog is in its element here, hemmed in by hedgerows and 90 degree corners circumnavigating fields. Nick needs some footage and we drive at quite a lick, two abreast with the camera car, Dr O and I telling Ball’s story over the racket of the S&S V-twin. You can feel each and every ingredient that has gone into this car. Cylinders vaporising hydrocarbons and battering your ears, the slightly scrabbly front tyres, steering angles you can see better than feel, brakes you have to work at and the scenery at your elbows. It’s easy to see why Albert Ball chose a Morgan: it offers engagement and encouragement, unmatched even today; it makes you feel happy to be alive. Despite both being cold, wet and knackered Dr O and I are still fighting over the keys.

Our final destination is the military cemetery at Annœullin, but not yet. On the 7th of May 1917 Ball and his squadron of SE5s ran into a squadron of German Albatros fighters, one piloted by Lothar von Richthofen, brother of the Red Baron, Manfred. Von Richthofen’s fuel tank was holed in the melee and he was forced to ditch as he ran out of fuel. As Ball swooped through the cloud to follow him he became fatally disorientated. We pull the Mog onto a muddy grass verge next to a potato field, on a lane between Annœullin and Allennes-Les-Marais. We trudge across cloying mud and rotting crops to a memorial stone in the middle of the field and Nick films the scene. Albert Ball’s aircraft crashed on this very spot. His father bought this field and placed the stone here in memory of his son. Albert Ball died in the arms of a farmer’s daughter here in this nondescript potato field. In a strange twist of fate, Albert Ball’s body lies in the German section of the nearby military cemetery which is our next stop. The Germans, recognising his skill, had buried him here with full honours. Manfred Von Richthofen called him “by far the best English flying man”. 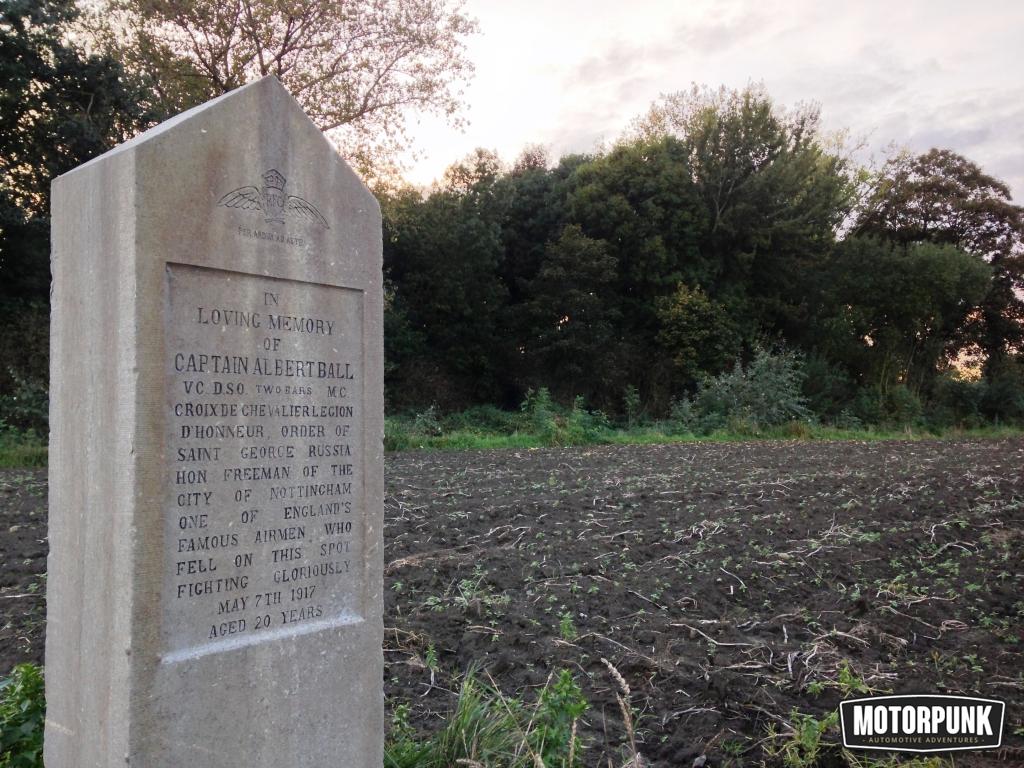 After the war the British exhumed their men from this cemetery but Ball’s father wanted him to rest undisturbed. He was posthumously awarded the Victoria Cross and Nottingham mourned. We park the 3 Wheeler outside the cemetery and Nick films as we walk through hundreds of crosses, German soldiers and Russian POWs and find the only Briton lying here. We lay our wreath on Albert Ball’s grave and contemplate his sacrifice. The script gets scrunched up in my wet pocket. Millions lost their lives in the Great War; men from both sides, and, whilst few had the excitement of Ball’s war, today we remember them all.

We would like to thank the people of Morgan Motor Company who kindly provided the Morgan 3 wheeler pictured here for this feature at short notice, to Nick and the team XCAR for producing a fantastic video feature of this trip, to Ynes and Richard at Nottingham Castle for their assistance with filming, to Neil at BBC East Midlands and of course to Albert Ball and the millions who gave their lives in the great war. They will not be forgotten.