It is, admittedly, a bit of a bucket list destination.  I realised it was 20 years since my first, faltering lap of the Nürburgring in March of this year, and when getting my old Alfa sickeningly sideways, again, I concluded that I’m done with it. Public days are getting fewer (and, therefore, busier), my attitude to risk is a bit less gung-ho nowadays and, above all, I am sick of the endless fanfare about the place from manufacturers tuning mainstream cars to best careen around the Karussell at speed when in reality they’ll be mostly sat on the M6 in rush hour. ‘ring-honed cars are generally rubbish road cars. Germany has more to offer.

The story about the creation of the Grenzlandring is almost unbelievable; In 1938 Germany built a defensive road around the town of Wegberg, which sits right on the German-Dutch border. It was known as the Wegbergring and was not marked on any maps, although the allies somehow knew all about it. 91% of the housing in the town was ruined in the war but the defensive road remained almost intact. A Dr Carl Marcus supposedly re-discovered the road immediately after the war when cycling to the town and accidentally doing three laps before realising the road he was on was a loop. It was wider than would ever be required for road traffic, 9km in length and with a concreted surface. Marcus was probably spying for the British during the war and it’s not unlikely that, as he had become Mayor of a neighbouring town after the war, he made his “discovery” to throw the citizens he was then serving off the scent. No-one knows for sure.

Local entrepreneur, gentleman about town and MG enthusiast, Teddy Vorster, made use of the egg-shaped circuit in 1948 and expected 100,000 people to turn up to watch some amateur racing. A quarter of a million came and the Grenzlandring (“borderland ring”) as it became known, proved itself as a venue for exciting action on track. The all-time lap record was set in ‘49 by Georg “Schorsch” Meier on a supercharged BMW 500 motorbike at 134 mph, while Toni Ulmen set the all-time record for cars, driving a Veritas 2000 RS to 132 mph in ’51. Today the same road layout exists, albeit without a single standing structure to indicate that grandstands and pits were ever here to accommodate crowds of up to 300,000 people. It’s a long, flat, loop with two long curves (it’s not exactly Spa) but it is fast, and was utilised at a time when safety was still an afterthought and speeds increased dramatically each season as automotive racing technology quickly developed. The circuit was touted as being ‘the fastest in Europe’. What happened next was almost inevitable.

In August 1952, Berliner Helmut Niedermayr lost control of his F2 car on the Roermonder Kurve at around 120mph. His Reif Vertias Meteor went into the crowd due to a puncture (suspected but never proven) killing 13 people and injuring 42 others. The organisers, fearing further injuries from a stampede if they announced it, allowed the race to continue as medics arrived. Niedermayr (who had raced at LeMans and in one F1 race) survived, but quit racing and later moved to the Virgin Islands. The local Government banned further racing at the Grenzlandring and a modest memorial was erected to remember the tragedy. That was the end of it. Old racetracks often follow public roads. Chosen for their potential for high speeds (Eg; Reims), or their interesting topography (Charade), they are fun to drive around even now; the basic layouts often being unchanged over time. But the Grenzlandring today is just another road – potholes, queues, traffic lights and all. And for that reason I would like to ban all testing of mainstream motors at the Nürburgring and instead send manufacturers to the Grenzlandring – It would make for better-developed road cars and less stressful touristenfahrts at the other ‘ring.

Roadtripping is a big part of MotorPunk magazine. For more inspiration, in a nicely printed and handy read-on-the-bog-sized format, buy a print copy here. 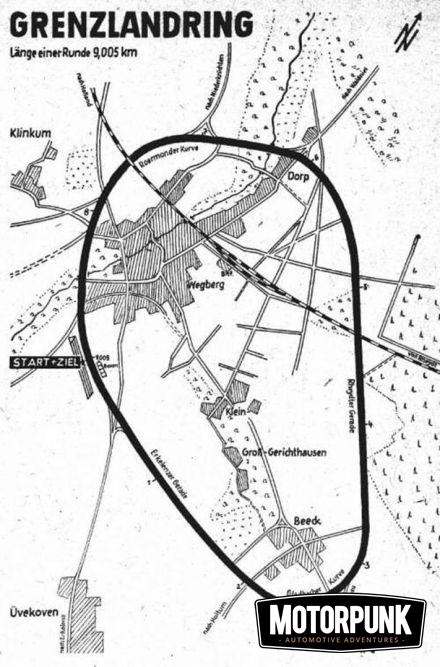 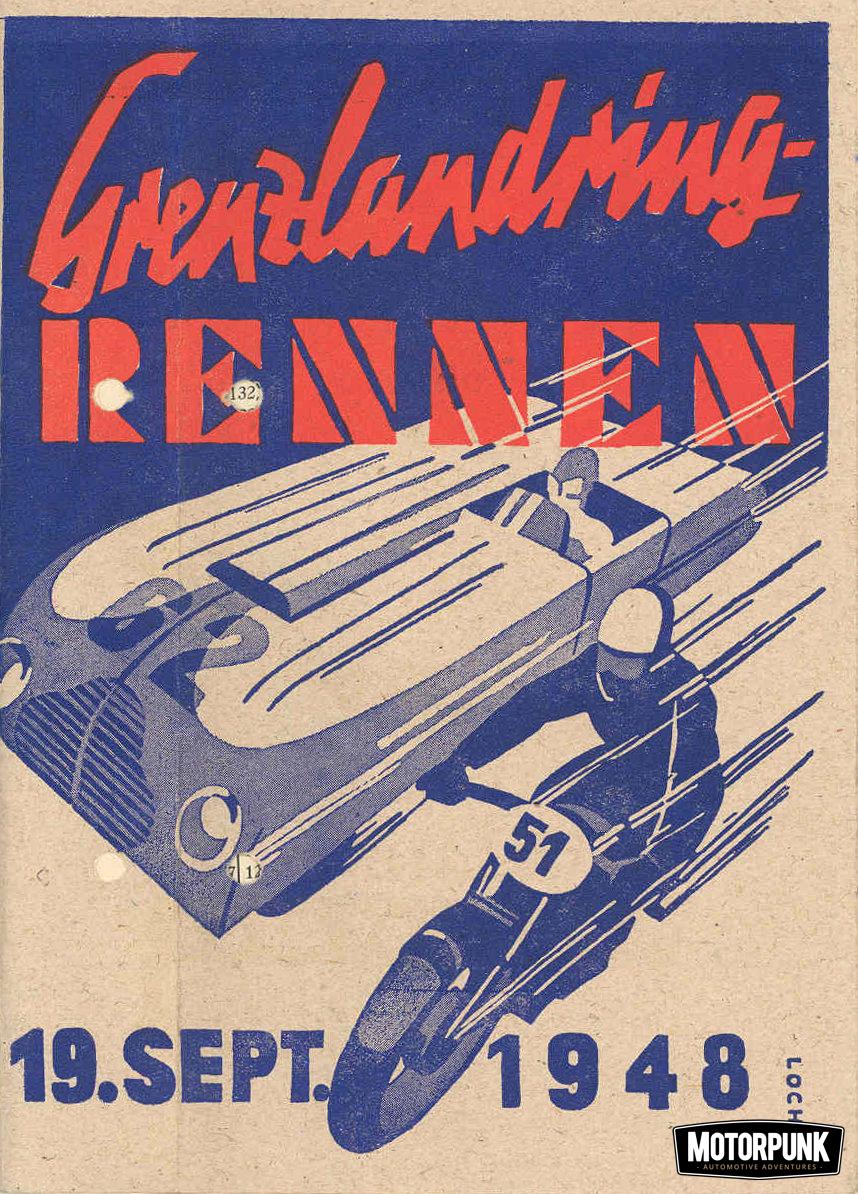 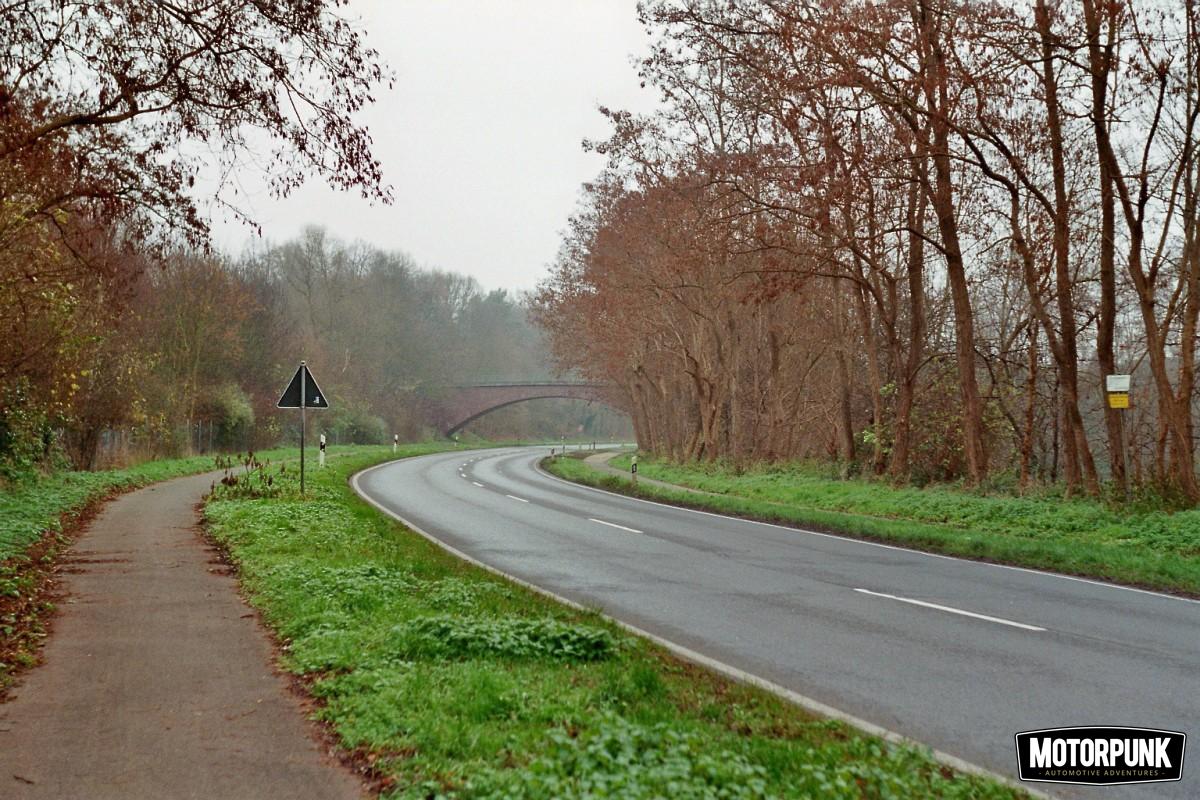