Left to their own devices for 238 years some rather silly Americans have created…… this. The 24 Hours of LeMons

When we British departed America in 1776 and left them to their own devices, it was rather like parents leaving their children alone for the first time and going on holiday. There have been times when the parents have returned to find their home turned into a semi-detached death metal club, inhabited by a swarm of thieving squatters and pissed-up sex addicts, illuminated by the Police helicopter. There are other times too, but no-one can remember those after the drunken teenage death metal sex orgy. In this feature MotorPunk looks at America, now a fully pubescent 238 year old, and celebrates something Britain would never have permitted had we stayed there – The 24 hours of Le Mons.

The creator of the 24h of LeMons series is motoring journalist Jay Lamm who devised a long distance race for sub $500 cars that would intentionally create multiple breakdowns – mechanical and mental. Jay realised that the fun is in the preparation of the car, the ingenious repairs needed to keep your banger alive, the teamwork and the chaos. Who comes first is secondary. There are races held frequently across the US and participants range from useless amateurs to spanner- savvy semi-pros. However, a sense of humour is a non- negotiable prerequisite; as the rulebook explains: “Whiners are not eligible to compete. If you believe that you might be a whiner, please check with
a domestic partner, guardian, or health-care professional before getting the rest of your team kicked the hell out of the race.” 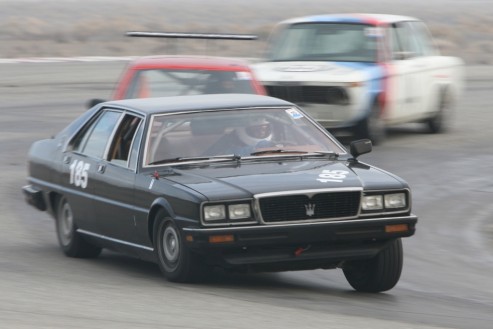 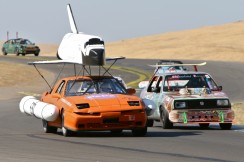 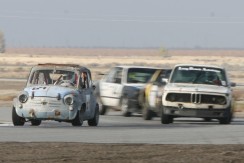 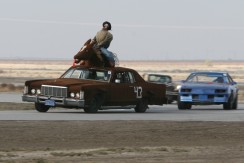 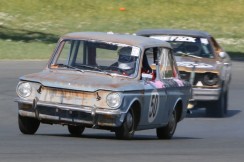 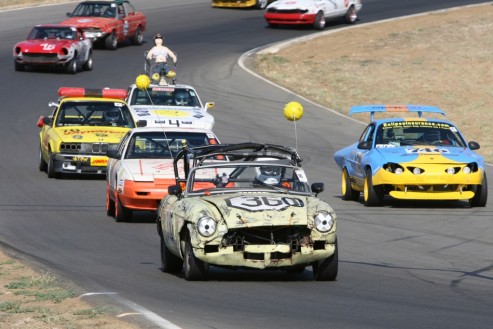 The $500 budget for the car wisely excludes safety equipment (cage, harnesses, fire extinguisher, etc.) and proper helmet and overalls are required. The races are usually over-subscribed and, to ensure the best chance of a place on the grid, the organisers suggest that applications such as “Choose us because we’ll wear beaver costumes in the paddock and our car is entirely coated in birch bark” will give you much better odds. From whatstarted as a one-off event has turned into a hugely popular race series with regional events sporting titles such as Arse-Sweat- Apalooza, The Chubba Cheddar Enduro and The Campaign to Prevent Gingivitis.

There are three classes to compete in: Class A (for cars with a prayer of winning); Class B (for cars with a prayer of finishing) and Class C (for cars with no prayer of finishing). Scrutineers decide which category your snotter qualifies for and award up to $600, payable in nickels, to the winners. There’s also a “Winner of the Index of Effluency”; a cut and paste from the LeMons rulebook says that this prize is “determined by a super- secret equation including vehicle age, general hooptieness, reliability of country of origin, unlikelihood of success, and the organizers’ whim”. I’m not sure what ‘hooptieness’ is, American English being a foreign language to most of us, but I very much like the sound of it.

YouTube has some good footage of the racing: it looks like a mixture of an open pit lane trackday and an explosion in a TV company’s props department. Cars need regular repairs to keep them out on track and with the wide variety of cars entered, and the mixed ability of drivers, ‘racing incidents’ are inevitable as fatigue takes hold over the long distances. 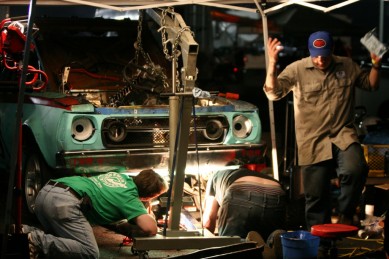 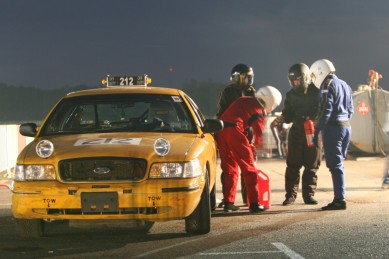 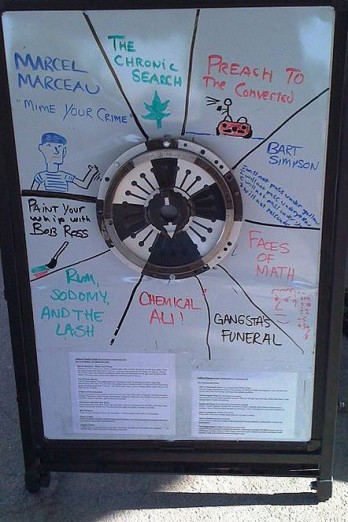 RULES
The rulebook explains the marshal’s warning flags in a jovial manner: “Red & Yellow Stripes (AKA the Ronald McDonald flag): Surface problems – something iffy is down on the track surface – could be water, could be oil, could be a ‘73 Fiat cylinder head”.

THE WHEEL OF MISFORTUNE
There are penalties for severe infringements, put your car on its roof and you’re out for the season, for example, but most are dealt with by the ‘wheel of misfortune’. Spin the wheel and accept your punishment. Some examples are as below;

THE CARS
The cars entered seem to fall loosely into three categories. Firstly there are the marques and models that are wholly inappropriate for use as long-range endurance racers; Hillman Imps, Austin Minis, shagged Maseratis and other manufacturers that withdrew from the American market years ago, leaving these few precious surviving examples to be slaughtered on circuits from Florida to California. The second category seems to examples of three-box saloon cars typically favoured by middle America, albeit decorated to excess, such as the BMW 3-series monument to dead Albanian dictator Enver Hoxha. The third category is rather difficult to label; let’s just call them ‘The Mentals’ and the most prominent member of this category is Jeff Bloch. 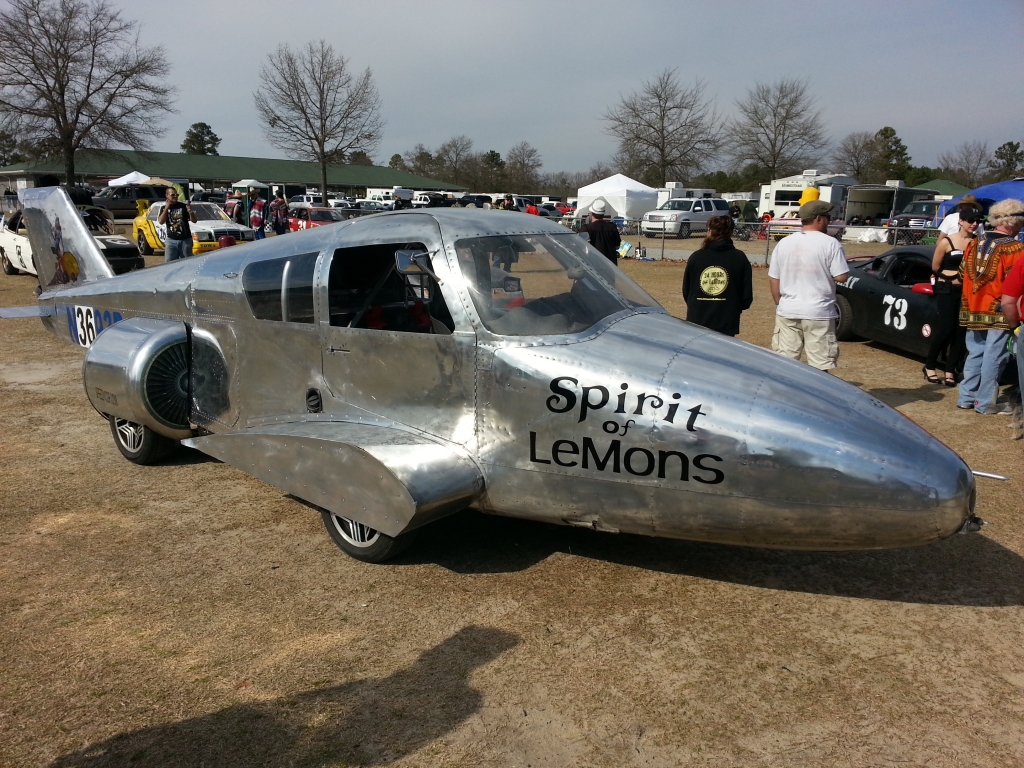 Real ‘Mentals’, as opposed to those bores at parties who think that a few piercings got on their gap year in Goa somehow makes them ‘ker-ay-zee’, are outwardly quite plausible. Jeff Bloch is an ordinary looking chap, a policeman, Sunday school teacher and all round good guy. He once shook hands with Bill Clinton and didn’t get pregnant. But he’s still a mental. I shall explain: by taking a 1987 Toyota van (because “it would make a good basis for a sportscar”) and welding on the fuselage of an abandoned 1956 Cessna 310 light aircraft, Jeff has built ‘The Spirit of LeMons’. Jeff has no engineering or aerospace qualifications but this hasn’t stopped him. Wing stubs hide the wheels, the undercarriage has been removed and the whole thing mated together (albeit it slightly skew-whiff in order to leave space for a driver/pilot and a co-driver/masochist inside the cabin). Removing the Cessna’s cigarette lighter on safety grounds Jeff has registered and insured it for use on the road.
It has a roll cage, lights and harnesses; it looks spectacular. How does it perform? It’ll do 90mph but numbers are academic, really; it’s a road going aeroplane and that’s all that matters. You won’t see such flair from Audi on the Mulsanne straight – they thought racing with a diesel engine was exciting. 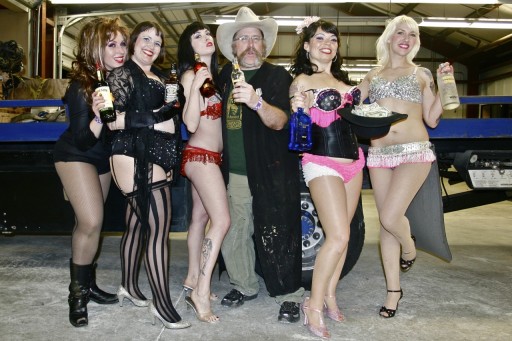 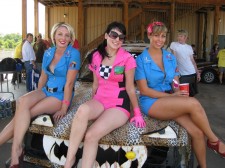 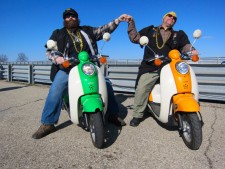 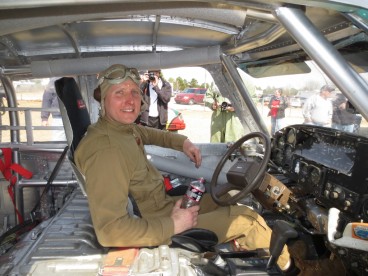 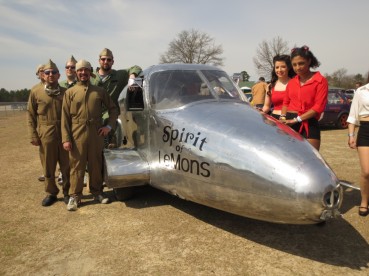 The effort all teams make with their cars is incredible; we particularly like the USS Enterprise Miata and the homage to The Homer from The Simpsons. We at MotorPunk love LeMons and can’t wait for it to come over to Blighty (or, as Lamm calls the heart of the British Empire, “the rainy Island”). For the cost of a slog down to Le Mans in France, with its filthy campsites and camera-happy Gendarmes, just to watch the teams of works-supported Hooray Henrys, you can enter and race against battered classics, wheeled hotdogs and wingless Cessnas at the 24 hours of LeMons. LeMons has all the fun of a semi-detached “rutting-nightclub-squat” incident at your parent’s house* for a fraction of the clean-up costs; as Jay Lamm says, “It’s not just for rich idiots, it’s for all idiots.”

…
Thanks to SpeedyCop for the photos
For info on how to enter, visit www.24hoursoflemons.com