You might not know the pop group called The New Christy Minstrels but I’ll bet you’ve heard their god-awful cowboy song; it goes “3 wheels on my wagon, and I’m still rollin’ along”. That tune was stuck in my head, in my helmet, as I roared across the Midlands in a shiny press-fleet Morgan 3 Wheeler I’d blagged. My destination was Curborough sprint circuit which was to be the venue for a 6 wheeled duel, the culmination of weeks of increasingly edgy banter between my friend Panties Hammersley and I. 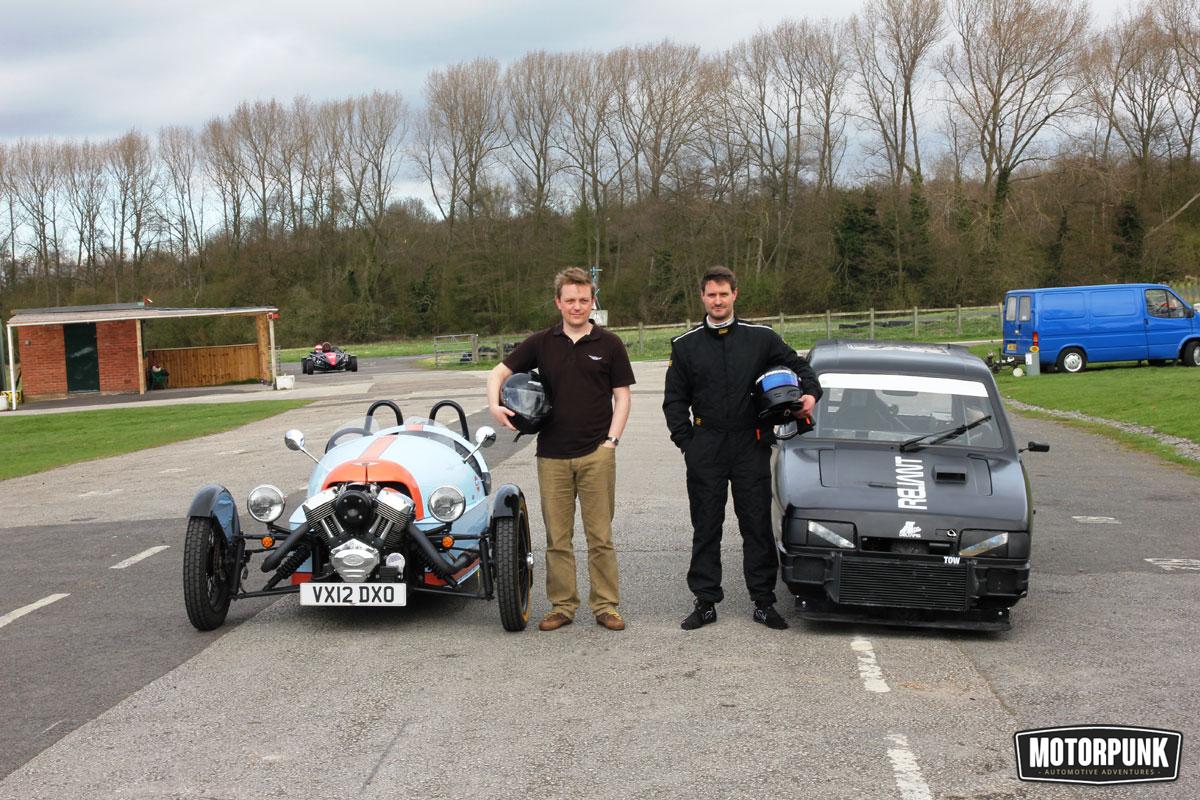 Panties has a heavily modified Reliant Robin and was quite sure that his home-built Del Boy deathtrap would beat £35k of lovingly hand-crafted Morgan 3 wheeler. An interesting twist is that Panties is a professional racing driver and engineer whereas I am merely a professional blagger. I have a man to wield my spanners and the most strenuous thing I’ve done in the M3W (as it’s known in Malvern) is refill my pipe. I arrived in good time to find Panties was already there, he had needed a Tranny to tow his Reliant to the venue whereas I had arrived under my own steam to smiles and waves from everyone. I am yet to meet anyone who doesn’t like the M3W. Apart from looking fantastic, especially in these Gulf colours, it is rather entertaining to drive. It has a thumping 115 BHP 2 cylinder Harley Davidson V Twin bike engine (that’s a lovely 1 litre per pot), an MX-5 gearbox and a snug tub to sit in. Kerbweight is a trim 550Kg, 0-60 takes just 4.5 seconds and it maxes out at 115mph. What home-built hero could beat that? 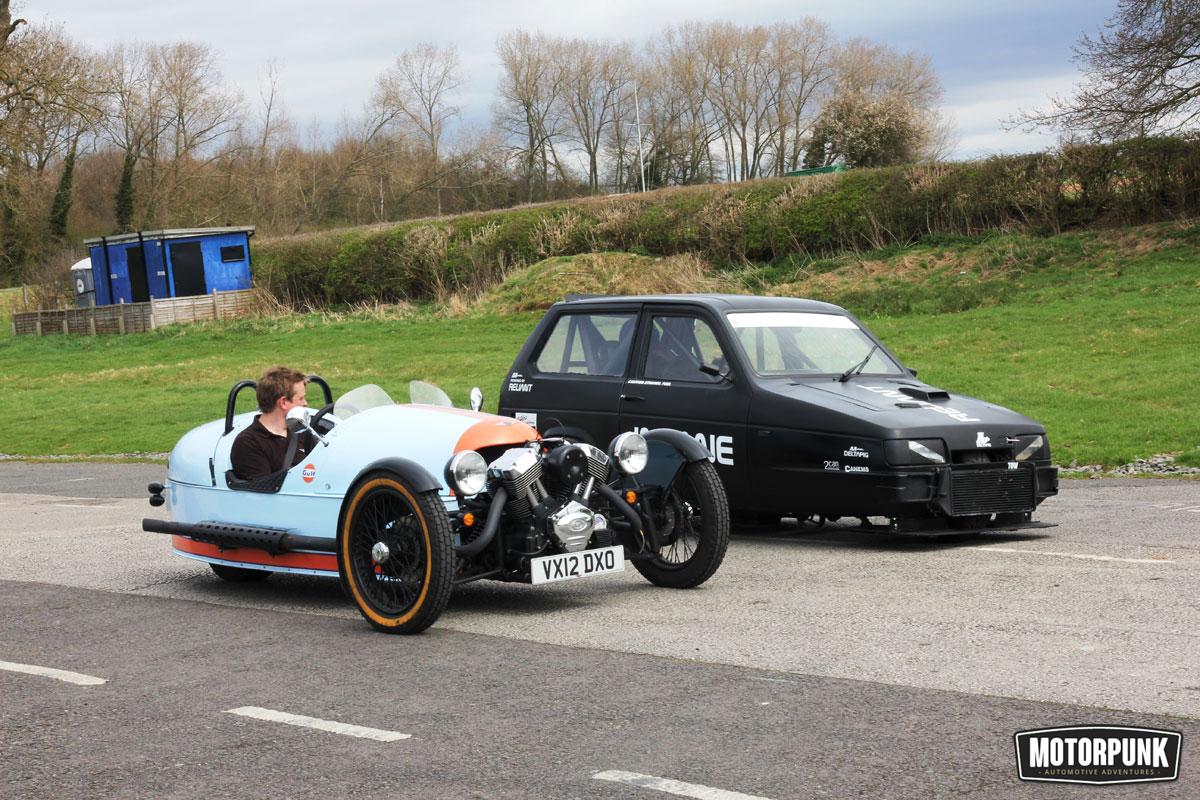 Panties three wheeler runs on ethanol, has a turbo-charged engine and has all superfluous fixtures and fittings removed to get the weight down – including the floor. The gearbox (scavenged from someone’s back yard) had only just been fitted and he started to bore me with some tedious waffle about fuel and timing, before disappearing inside his contraption to finish his fettling ahead of our duel. I had a cup of tea. Now I’m no race engineer but I could see that even with funny fuel and forced induction that Panties would have to be one hell of a driver to get his car to corner properly. One wheel at the front means it would have Vauxhall levels of understeer. The M3W, where I sat to observe his feverish spannering, has two wheels up front. My only concern in the Mog was putting the power down. It started to rain a little. I looked at the moistening track. A nice long straight, followed by a right hand hairpin, a little right-left-right chicane called Molehill, a long looping right called Fradley, then back down the straight. Panties’ encyclopaedic knowledge of racing lines, apexes and braking points would be largely negated by Curborough’s simple layout. How hard can it be? 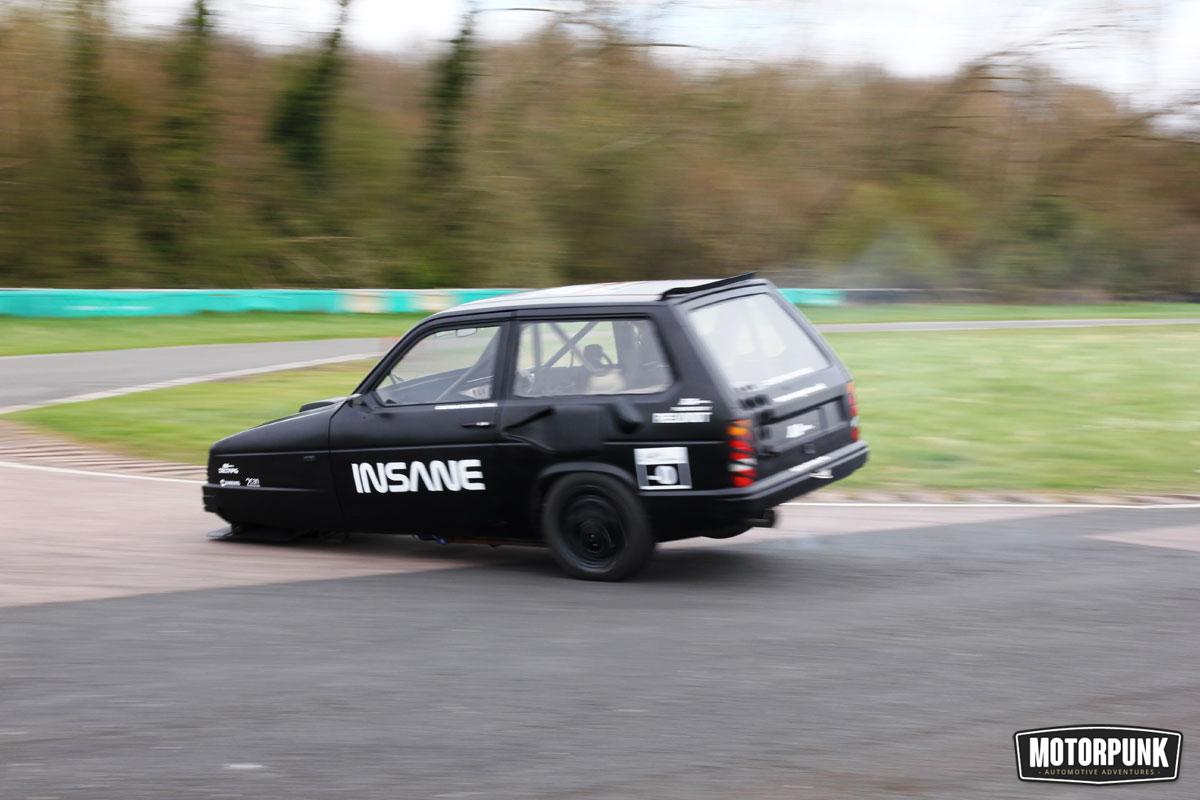 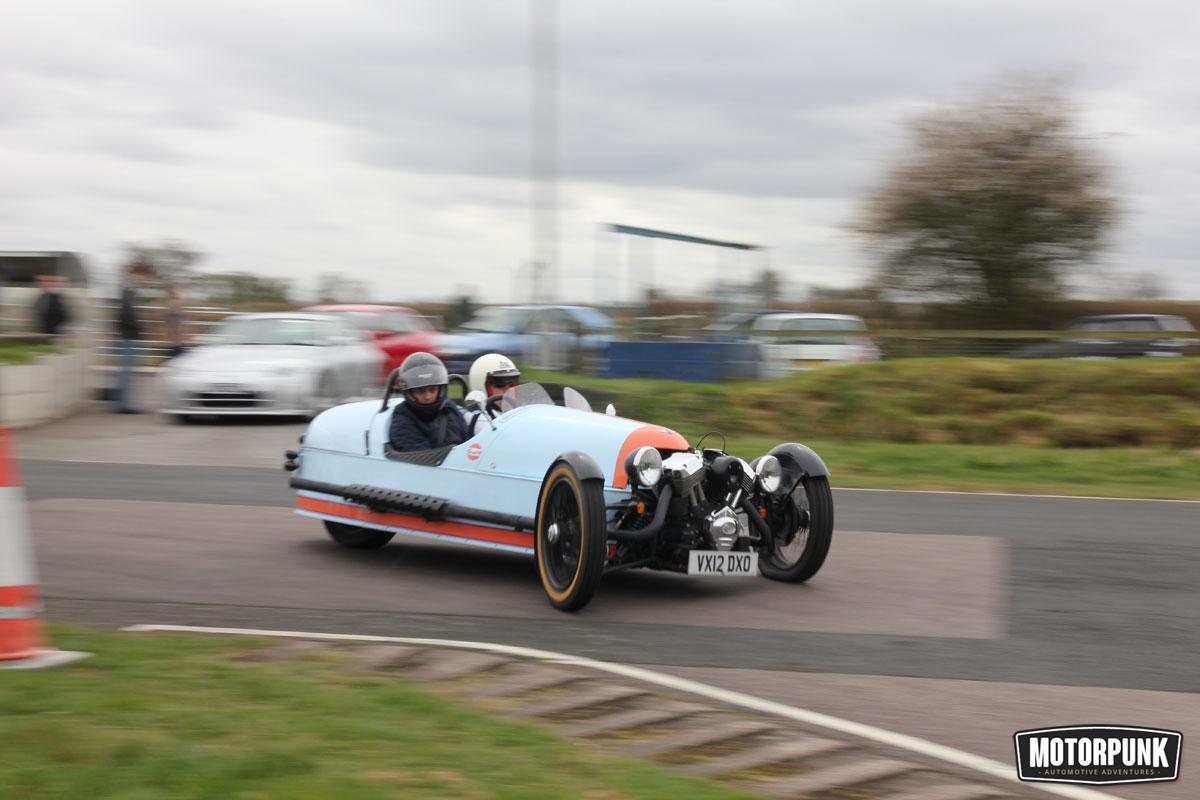 Time for a warm-up lap. A few people had turned up, some exchanged money, all of them watched intently as I flicked off the safety toggle and pressed the starter button in the centre of the Mog’s fabulous dash. The 2 pot engine feels lumpy and has a narrow torque band, meaning it goes thrap-thrap-thrap-umph as you quickly hit the limiter, the whole cockpit vibrating, arse-end smearing rubber all over the track. The steering is a bit odd, that’ll be something to do with the narrow front tyres, but the gearchange and brakes are pretty perfect for me. “All the gear and no idea” was Panties’ last taunt. But in a West Midlands accent that I struggled to understand. The Mog’s initial turn in is sharp, but as soon as you start to lean on the front tyres of the M3W you realise that the whole she-bang has been set up for safety. Colossal understeer. Suddenly the home-made suspension set-up of the Robin’s leading wheel looked quite clever. Whatever he was saying about camber and caster became clear as I ploughed round the Fradley right-hander and thrap-thrap-umph’d my way back to the pits. Some of the people watching started arguing about money. Panties went for a warm-up. Despite suspension chopped down to nothing it was clear that his car cornered like a Pot Bellied Pig, leaning over and lifting an inside wheel in the bends, trike becoming bike. 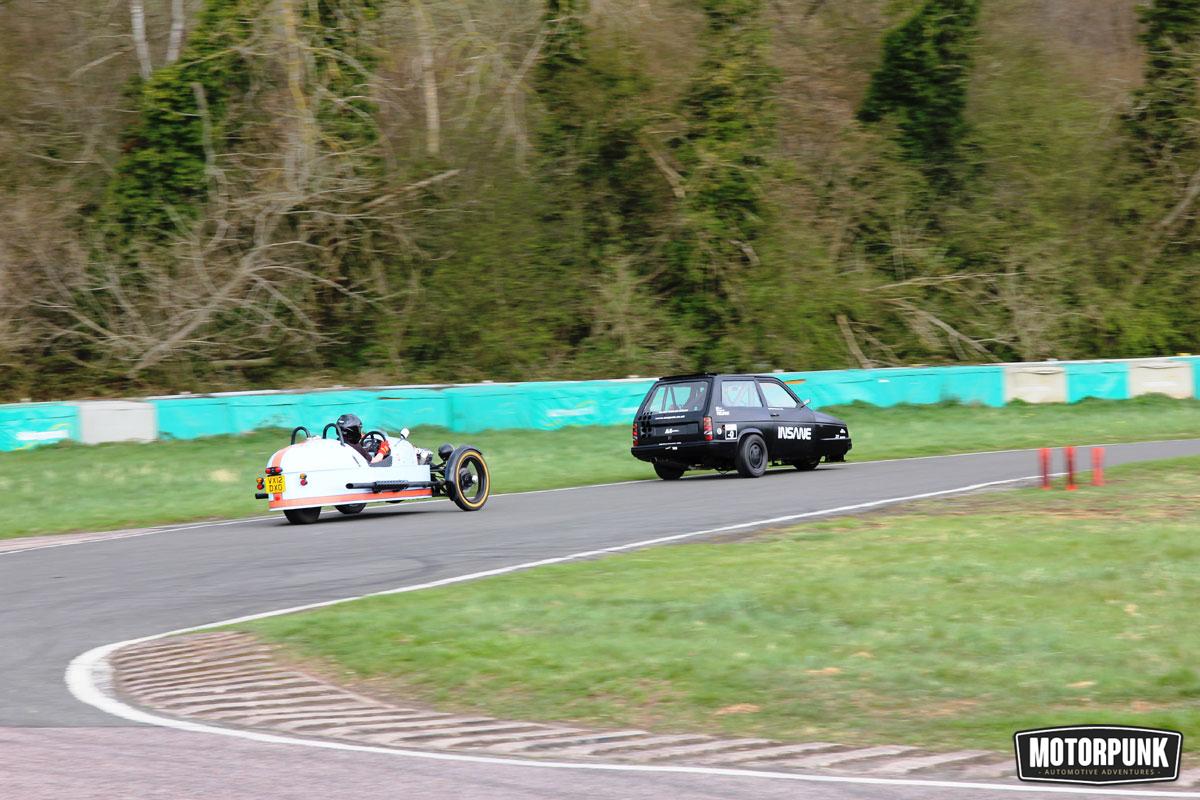 It was clear that we couldn’t race side-by side. The 2-1 versus 1-2 wheel layout meant very different handling characteristics and therefore different lines and an inevitable crunch on the tight turns. We decided that I’d do three laps leading and try to shake him off, then he’d do 3 and he’d try to shake me off, I was quite convinced that the Robin wouldn’t last 6 laps anyway. Thrapping off the line and round the first corner I glanced over my shoulder to see the Robin following, it actually looks quite intimidating from the front, especially when viewed from the low-slung seat of the Mog. I hoped that Panties hadn’t taken my piss-taking to heart, I had laid it on a bit thick. I slung it round the molehill chicane then waited an age for the understeer to abate before booting it out of the long Fradley corner and down the straight where I had time to check his position. He was a few lengths behind me on the straight, so I braked a bit later and a lot harder, then round for another lap. I was pulling away. The weight distribution was a bit off, my own weight added about 15% to the weight of the vehicle making right handers being grippier than left-handers. Through molehill again I tried leaning over to shift the weight about which helped a bit, motorbike and sidecar stye. It is so easy to run out of revs though and I thought of Panties’ meticulous steering inputs and quick gearchanges as I fought to a respectable distance between us. Some people watching were eating chips (bought with their winnings?) and the smell briefly distracted me, I locked up late and the Robin was on me again. 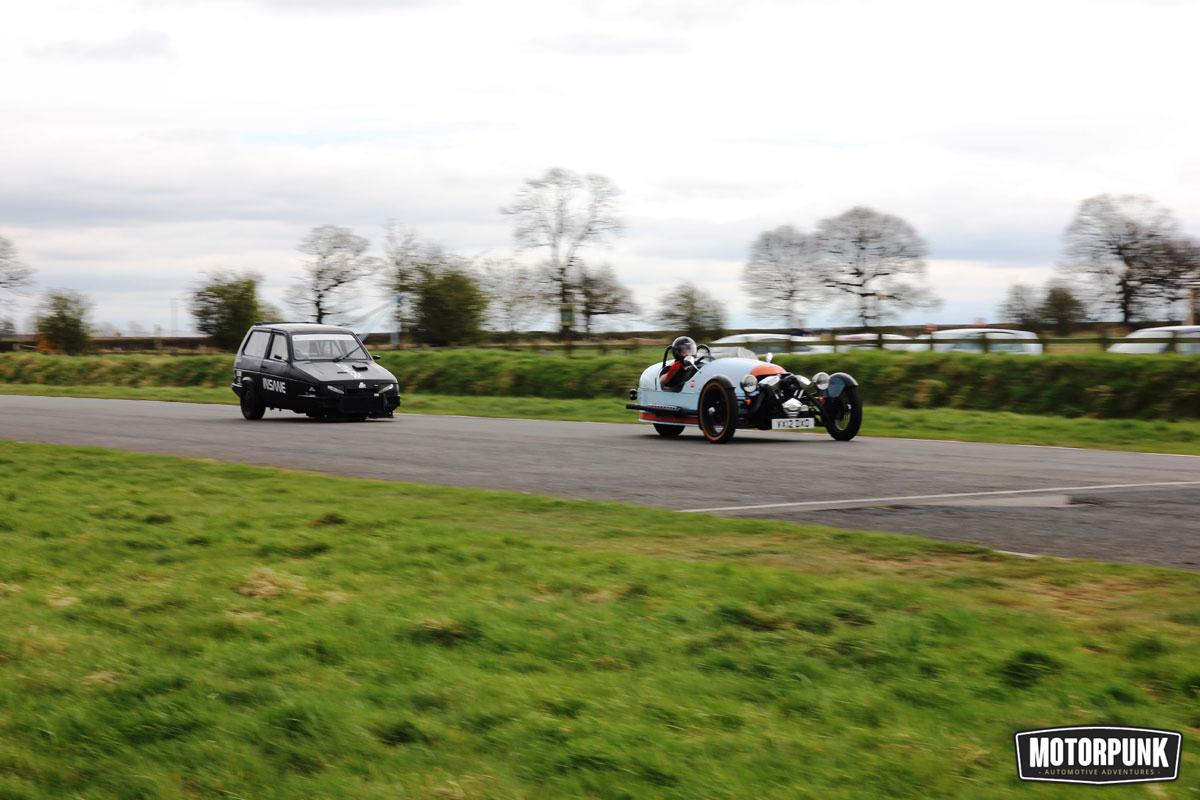 I made a cheeky tactical move. Long term MotorPunk reader who we shall call Tipex jumped in to give me a bit of balance. The understeer was still evident but the weight distribution was better and it slewed through the Molehill chicane in a more manageable fashion, the M3W pulled out a decent lead. Time to change. This time the Robin set off first and immediately my concentration evaporated watching the Robin ahead of me, smoke was billowing off the rear tyres as bodywork scrubbed rubber, it lurched and lunged around corners and I was comfortably on his bumper for all 3 laps. The M3W wins on paper, and on track, but Panties (and his car) really is insane. I had to lift my visor to wipe the tears of laughter from my eyes. What kind of lunatic chops up an already dynamically flawed vehicle, adds lots of power and then races it? I shook hands with Panties in the paddock and saluted his engineering ingenuity/lunacy [delete as applicable]. Spectator’s bets were off. With lungs full with the stench of burnt rubber, tears in our eyes and a head full of “Three wheels on my wagon” neither of us could decide who was the real winner. 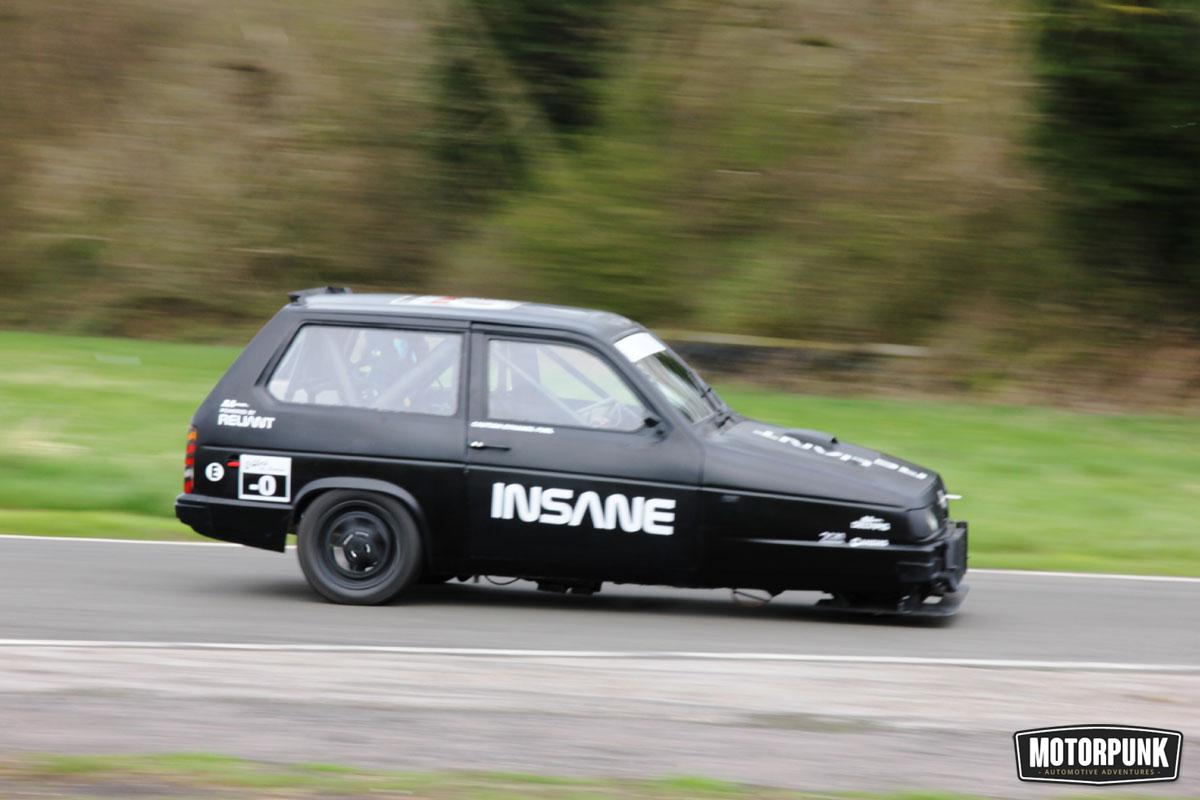 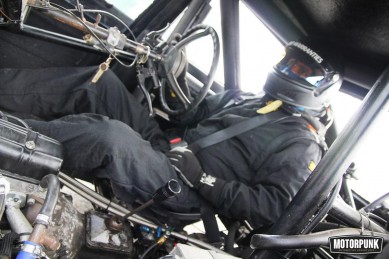 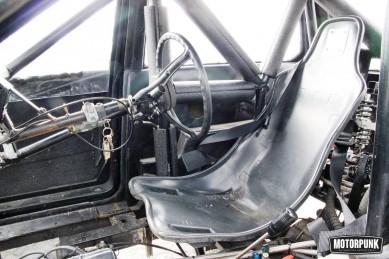 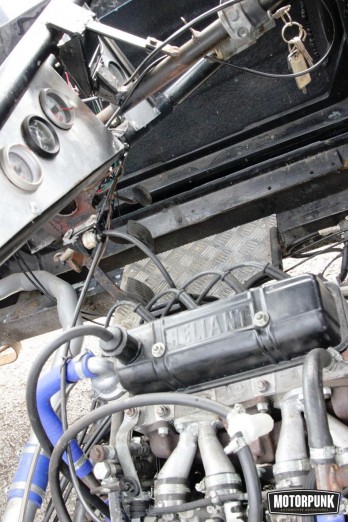 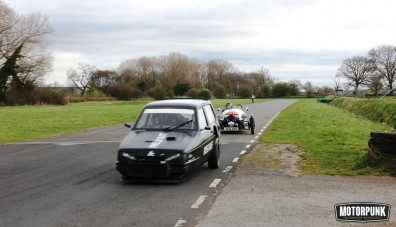 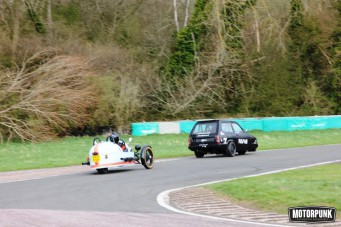 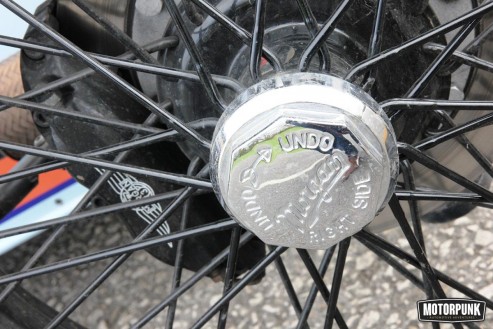 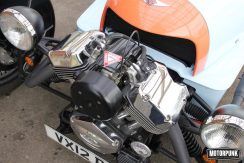 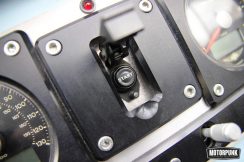 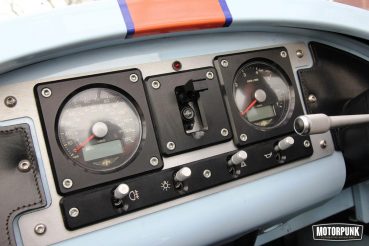 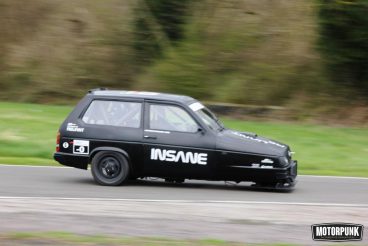