Here’s a Saab you probably haven’t heard of, doing something it really wasn’t designed for; The Saab 91 Safir (Sapphire) is a single-engined, light aircraft built in Holland. It was used mainly by the Swedish airforce in the ‘fifties and ‘sixties. This particular example is a 91D, meaning it has four seats, and this one had been used for testing radio equipment before it was bought by a chap called David Williams. In 1983, Williams spotted the new Hinstock bypass was being built and decided to fly down it, and under the Pixley Lane bridge. Living locally he walked down and measured up, reckoned his Saab would fit, and stood his Dad on the bridge with a camera to capture his stunt on the day before it opened to traffic. His Dad was too quick with the shutter but a friend got this one, ’80’s quality pic, to prove it happened. And here it is, just a Saab on the bypass. 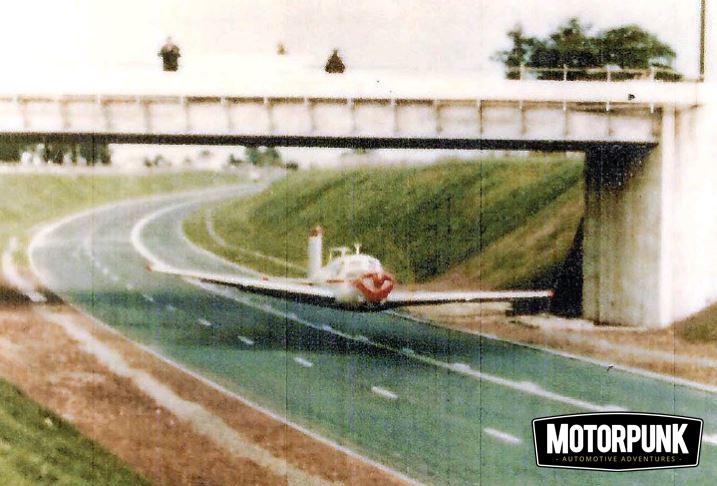 This bit of road is, as you can see, quite curvy. He would have had to line it up, cut the power to drop into the roadway cutting, and then instantly hit the power and flaps to pull up before disaster. This thing only has 180hp, it really isn’t designed for this sort of madness. Take a look at the road, today, courtesy of Streetview for a clearer idea of how tight this manoeuvre was;

It seems that Williams escaped trouble for his stunt, but didn’t repeat it. We’ve all wanted to V-Max our car on the bypass, but this Saab stunt is on another level. The same plane soldiers on in the UK today, there’s a review of it’s flying characteristics here from someone who may be unaware of it’s interesting history.