I wonder how many MX-5 owners know where their Nardi steering wheel comes from. EBay isn’t the answer, there’s more to the name than that. The man, Enrico Nardi, was born in 1907 in Bologna. He was a practical joker, racer and first class Engineer and it’s time we had a look at his ‘other’ work. He worked at Lancia in the twenties and thirties, competing in the Mille Miglia, before building his first car, the miniscule Nardi-Monaco Chichibio. There’s much more to this man than steering wheels. 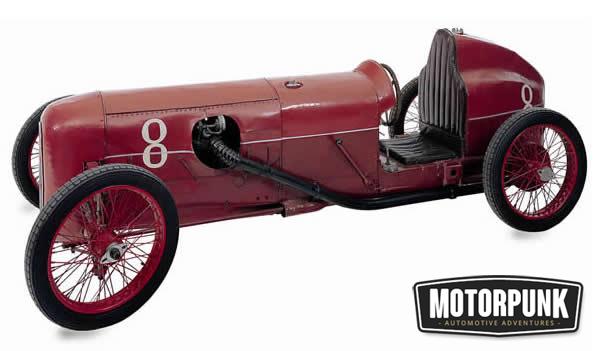 The Chichibio looks broadly like a pre-war single seat racer but under the skin is some interesting technology. It has a transverse 998cc two cylinder engine producing 65BHP and it was front wheel drive. But with a tiny frontal profile and stated weight of just 300Kg (!) it once hit 110MPH at Monza. Nardi’s skills weren’t just coachbuilding, he wrung the most out of simple mechanical components. After this he went to work for Ferrari, also competing in the 1940 Mille Miglia, but then the war came and ruined everyone’s fun for a while. 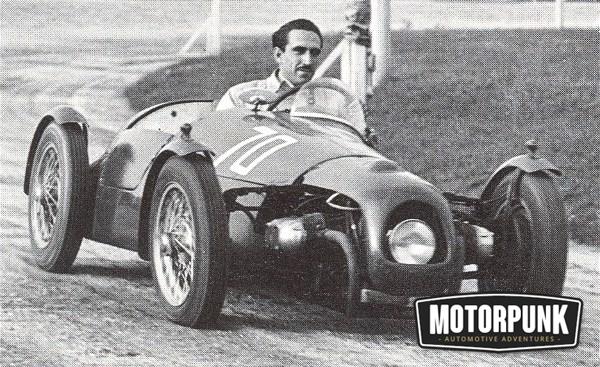 After the war Nardi designed and built the 750ND (above). Based on a Fiat 500 chassis it had a BMW flat twin ‘bike engine with just 50BHP and a single headlamp. This was rear wheel drive and instantly won in hillclimb events, three examples entered the ’52 Targa Florio but failed to finish. At the Moncenisio hillclimb in ‘53 a 750ND came eighth, just 2% slower than a factory Ferrari. Nardi reminds me of a young Colin Chapman, the Englishman making the most of Austin 7 components to go trialing and the Italian Hillclimbing with bits of Fiat 500, both building successful machines with very limited resources and lots of ingenuity. Imagine Adrian Newey building an F1 winner from blue-tac and bits of Mini. That. 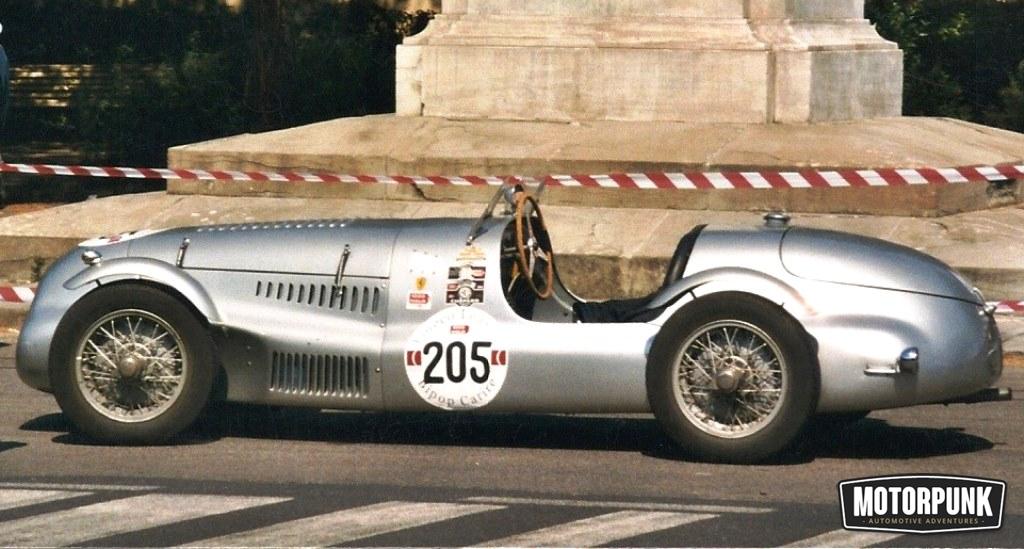 For all the clever aerodynamics and ingenuity in squeezing every last drop of oomph from little engines, Nardi knew he needed more power, and his Nardi-Danese 1500 of ’47 had it, combining two 746cc motors to give a litre and a half. Library picture above. He built cars to race, then, road car customers were considered a bit of an inconvenience, or targets for some workshop fun. One snooty visitor was left locked in his office with a barking Alsatian for half an hour because Nardi didn’t like the look of him. 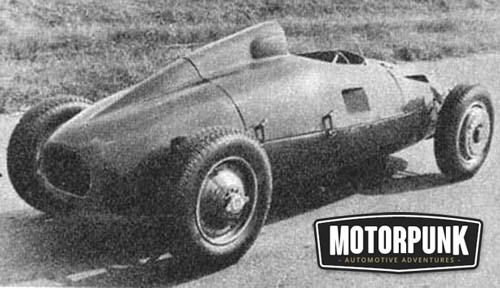 In ’52 he collaborated with Lancia to develop an F2 car. It got lots of bits from the Aurelia including a handy 160BHP V6 engine in the back, and outboard disc brakes, but it didn’t quite have enough shove to succeed in racing and it didn’t get beyond prototype stage. Pretty, though. He had a reputation for being a bit prickly, but a joker too. At the prestigious 1955 Turin motor show he passed off his pretty young daughter as his mistress, just to ruffle a few feathers. His next car caused an even bigger stir… 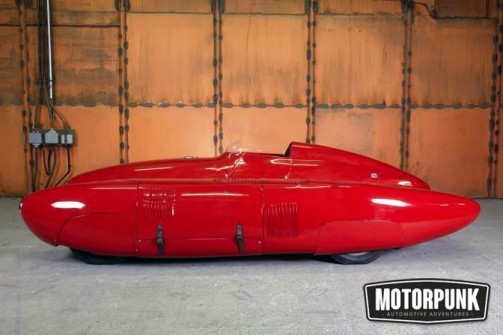 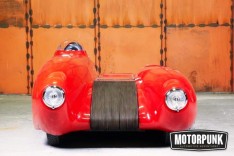 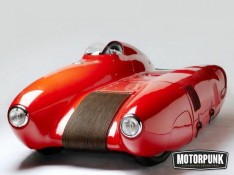 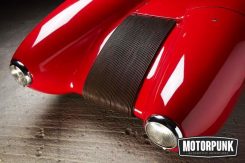 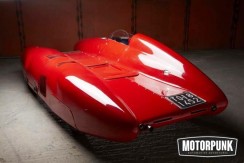 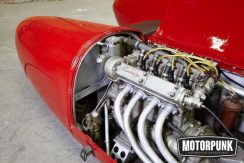 This is Nardi’s most spectacular machine, the Bisiluro Damolnar, built to compete at Le Mans in 1955. Playing to his strengths Nardi made the bodywork incredibly aerodynamic (Bisiluro meaning two torpedos) and light (450Kg) to compensate for the little 62BHP 737cc 4 cylinder engine. The engine sat in one pod, the driver in the other. 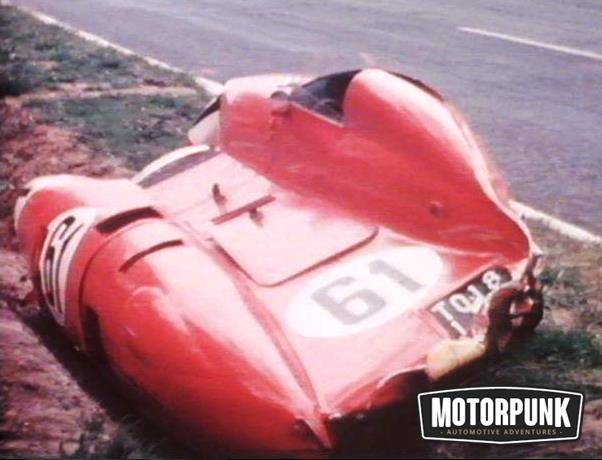 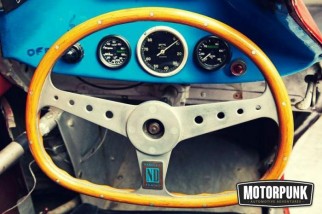 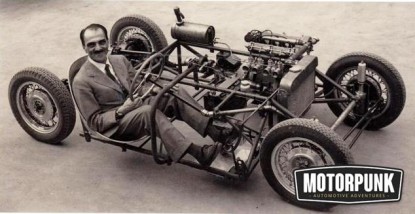 At Le Mans it hit 134MPH on the Mulsanne straight before being blown into the shrubbery (literally) by a passing D-type Jaguar. The driver escaped but the car was a wreck. Pictures above. This spectacular car was (happily) later restored and can be seen in the Leonardo Da Vinci Museum, Milano, today. Does the steering wheel look familiar? 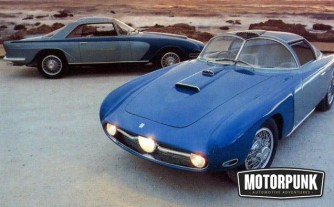 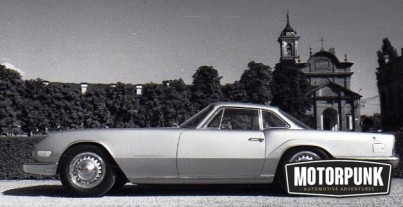 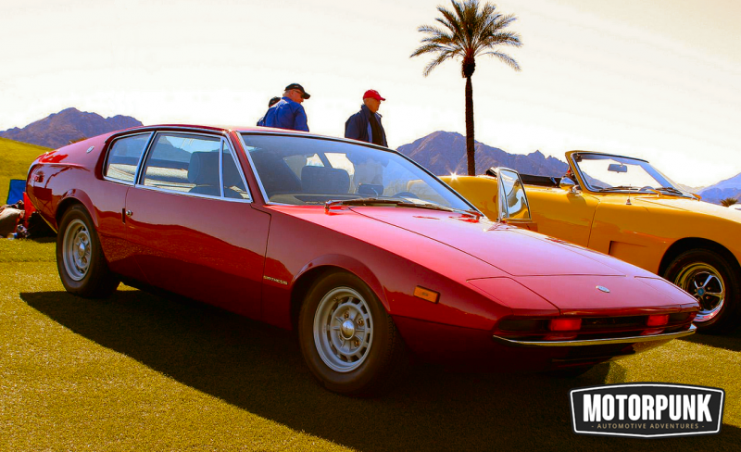 After this Nardi focused on hiring out his engineering expertise and assisting with coachbuilding, making models such as the Lancia based Raggio-Azzurro II, Tom Tjaarda’s Sinthesis concept (in red), and the Silver Ray with bodywork by Michelotti. I love the picture above with Nardi (stood on the left) looking slightly unapprovingly at Michelotti’s bodywork. I imagine him thinking he could scalp a lot of metal off, lose a litre or two and make it prettier and faster. 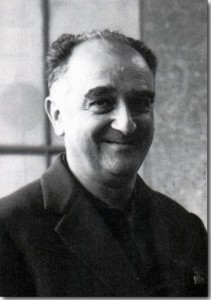 Enrico Nardi went to that great hillclimb in the sky in ’66 and the family abandoned all automotive activities, apart from giving us that lovely MX-5 steering wheel we know so well. It would be fantastic to have the rest of a Nardi car attached to it.

Pics from Fiat124spider.com, carstyling.ru, VeloceToday.com (who might sell you a great book on Nardi, or buy the last copy on Amazon here), D Gooley and the factually slightly wonky Wikipedia.