We at MotorPunk generally like cars that are a little bit oddball, take a left-field approach or throw spanners in the face of convention … but the Suzuki X-90 is a weird beast that’s been rather hard to love. This is the motor that Clarkson declared, quite simply, as the ‘Worst car ever.’ A car that was once described by American journalists as ‘neither fish nor fowl’, despite having the face of a bloated carp and pretty foul road manners to boot.

When this two-seater pseudo-SUV landed on European forecourts in October 1995 it certainly got car buffs talking; with all the practicality of a compact sports car, off-roader ride height and the sex appeal of a Sumo in drag, it was, in fact, none of these things. Everything about the X-90 was plain wrong. Sales-wise, the car was a bit of a flop. Only 1,300 were flogged to the Japanese and barely 7,000 were sold in the United States – the key export market Suzuki had hoped to crack.

When the hard-pressed Suzuki marketing team was asked to come up with a snazzy billboard poster campaign to plug the fugly X-90 the resulting advert showed the best snap they could find with the strapline “what are you staring at?” scrawled beneath. Ironically brilliant? Maybe. But nobody wanted to be in on the joke even when they knocked 25% off the RRP. In 1997, in one final desperate attempt to boost sales, Suzuki created the Philippe Cousteau special edition. Unsurprisingly, this limited edition X-90, named after the son of a once-famous French frogman, also failed to cause a run on Suzuki showrooms for the freaky-looking runabout. 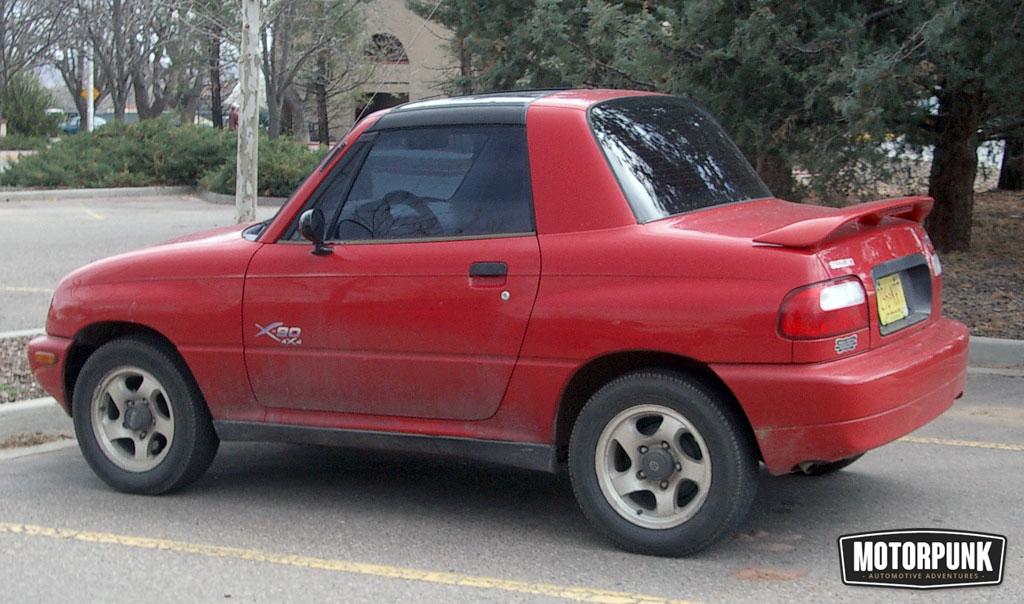 Perhaps the most notable thing about the Suzuki X-90 during its short three year production run was that, thanks to its tall three-box design, it found service for a few years with Red Bull as a can-carrying promotional vehicle for its revolting fizzy pop – and therefore, a good match in our books – before the fleets of MINI Coopers, driven by orange-skinned promo girls, took on the task.

However, that wasn’t the end of the road for the X-90 here in Blighty. Many of these unloved second-hand Suzuki have recently found a new lease of life in classic car trials where 2WD road cars are thrashed up steep forgotten byways and forest tracks in this historic grassroots motorsport. You might remember us covering classic trialling when we took our much abused Golf GTI on the Edinburgh Trail a few years ago, or our piece on the plucky trialling Morgans.

Trialling is perhaps the oldest form of off-road motorsport in the world; the basic objective being to get an old-school road car (i.e. one without traction control, LSD, low range boxes, 4WD or knobbly tyres) up steep muddy tracks and farm roads without losing forward momentum and stopping. This is known as ‘cleaning’ a section and it’s much harder than you might think. But because most UK spec’s X-90 were the basic 2WD faux-by-four versions, without any real off-roading credentials, they are actually highly sought after now for classic trials. They have the benefit of low weight (only 1100kg), good ground clearance, a torquey 1.6-litre powerplant and (most importantly) are virtually worthless.

So does this new life as the favourite weapon of today’s classic trialists mean the fish-faced X-90 now deserves a place in MotorPunk’s CarClub 18-30? Well, I’m not really sure. The rules say that it should be ‘Cool, Quick or Quirky’ and ‘built between 18 to 30 years ago’. It’s the right age, it is certainly quirky and it’s pretty quick in the hands of decent trial driver! But cool? I’m afraid on that score it’s a definite, emphatic and categorical ‘NO’ from the entire MotorPunk committee.

Want to see one in action at the Ebworth Classic Trial?