To any Hollywood directors out there, I would like to pitch you a story. There’s this guy called Helge Meyer, a lone wolf type, ex military and a committed Christian. There’s a civil war in Europe. Humanitarian Aid convoys are not getting through. The white painted trucks stuffed full of supplies have become prize targets for militias and bandits. Meyer wants to help. He offers his services to agencies, governments, and the UN. They all turn him down, so he sticks two fingers up at the system and decides to go it alone.

His plan is to penetrate the warzone in a tough, fast car to deliver critical supplies to the needy. He pulls some strings with old army buddies to see if they can help. It leads him to an American airbase in Germany. There he buys a used ’79 Camaro in need of a spruce up. Word gets around about a crazy Danish Special Forces veteran, on a mission from God. Some mechanics at the base volunteer their free time to give the Chevy a makeover…

(Cue The A Team music) 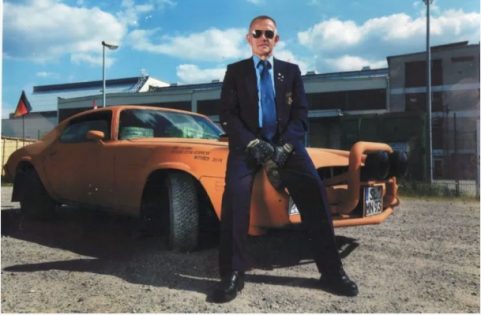 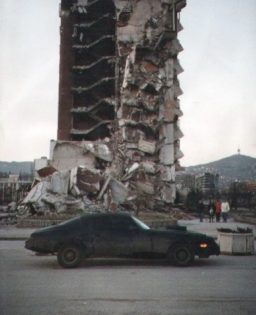 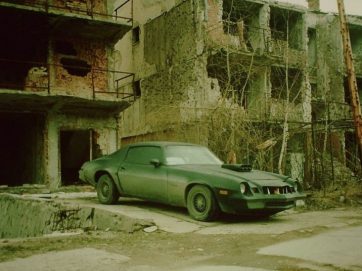 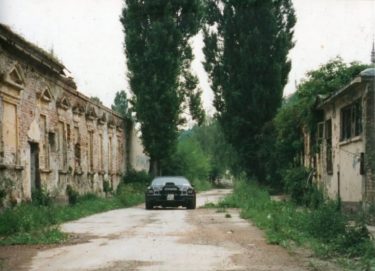 They strip down the Camaro and strengthen it, fitting extra steel in the floor pans and kevlar plates in the boot and doors. They craft steel panels to replace the curved rear window and the side glass. The small block V8 is tuned and fettled to raise the BHP from a miserly 170 to 220. Next they add a Nitrous system that offers a boost to 440BHP so the Camaro can go fast and furious for short bursts of ‘evasion’.

The tyres get an upgrade to military spec run flats. They fabricate a nudge bar and a custom blade to clear debris and personnel mines. They fit a fire suppression system, and infra red for lights out driving, along with night and thermal vision kit to give the driver a heads up on potential ‘nasties’ lurking in the darkness. They paint the blue Camaro matt black. Not just any old black, but a military grade black that absorbs radar and decreases thermal signature.

They call it the Ghost Camaro. It looks like a car for post apocalyptic travel. It needs to be. Meyer is going to Bosnia, into the heart of a European tragedy, a civil war, sinking into genocide. His stripped out, boosted Chevy can carry 400kg of supplies. Meyer adds one final flourish, a rubber duck mounted on the grille. The Americans raise $12000 for supplies and give him a kevlar jacket and helmet. Meyer does not carry a gun. He carries a standard combat knife and his bible. These items earn him the nickname of God’s Rambo. 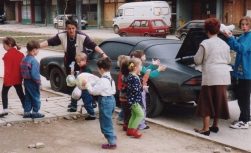 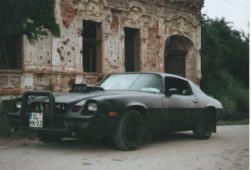 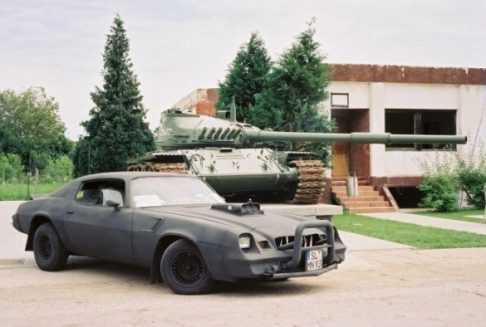 Over the following years, Meyer uses back roads and stealth to run in and out of the war zone over a hundred times, playing cat and V8 mouse with paramilitaries and bandits to get his supplies through. He delivers not just baby milk, soap, medicine and clothes, but hope and news from the world outside. The Camaro comes under fire several times. On one occasion, Meyer’s life is saved from a sniper’s bullet by his kevlar helmet. Undeterred, he draws strength from the reliable rumble of his V8 motor, and faith from the bible he reads each day.

These days Helge Meyer lives with his wife in Germany. He says his survival is down to ‘Guardian Angels’. He still owns the Ghost Camaro. He lovingly calls it his warhorse. His wife hates it. It’s now covered over 100,000 miles and is painted a lurid orange. I think he’s missed a trick there. If I owned a nitrous Camaro with radar defeating paint, I wouldn’t be in a hurry to give it a respray.

The pictures you see here are from his book, ‘Gottes Rambo’. It’s only available in Danish and German. This really should be a film. No CGI required, just an honest portrayal of Meyer’s ballsy, solo efforts to help those left to fend for themselves when civilisation turns on itself. God’s Rambo reminds us that real heroes don’t wear capes or have superpowers, although quite often, they do drive very cool cars.