Crude, gutless and rejected by the military, this is the unlikely story of how the reinvented Moke charmed civvy street to become a ’60s style icon.

In downtown Los Angeles is the Museum of Failure, a collection of 100 barmy inventions that you can’t believe actually made it into production. Some are just marketing balls-ups, such as Colgate’s attempt to sell microwave lasagnas or Bic’s slightly disturbing ‘pens for women’ campaign. Another stinker was the Harley Davidson perfume line with its TV ad’ featuring a leather-clad biker riding through the blazing Arizona Desert, presumably pitched to the ladies that want to smell like a Hells Angel’s perineum. Other flops were down to poor design, such as the truly awful Donald Trump board game – a thinly veiled Monopoly rip-off for the morally bankrupt – and the wretched Ford Edsel with its front grill shaped like a lady’s front bottom. Perhaps unsurprisingly, there’s a DMC-12 on display too. But, by rights, centre stage, as the punchline for the whole exhibition, there should be an original BMC Buckboard mounted on a plinth with a plaque underneath that reads, “What were you thinking Issigonis?”

Contrary to common belief the Moke was never a kit car. Nor was it a skunkworks side project or a ‘parts bin’ afterthought. Right from the off the British Motor Corporation’s brightest boffin, Sir Alec Issigonis, planned to mass-produce a Mini variant with a rugged body shell, to nab a slice of the lucrative military market from the likes of Land Rover and the Willys Jeep company. In 1960, one year after the Mk1 Mini saloon was launched, BMC presented their Buckboard prototype to the British Army as a lightweight fighting vehicle that could be dropped by parachute into a combat zone, much like the ‘Q Branch’ Welbike of WWII. 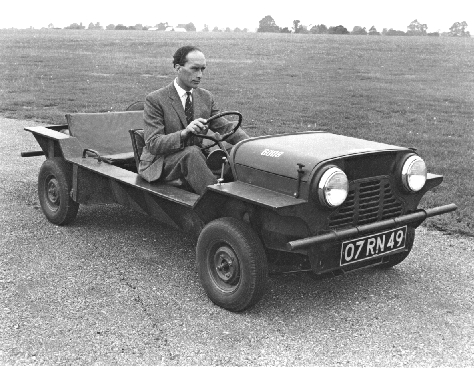 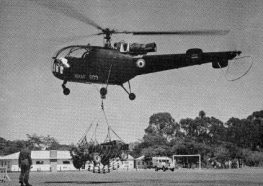 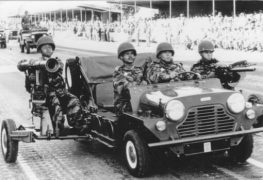 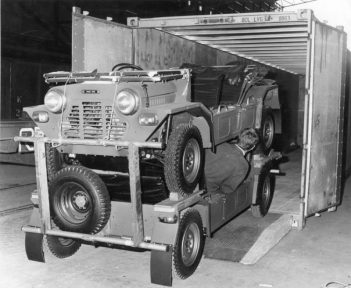 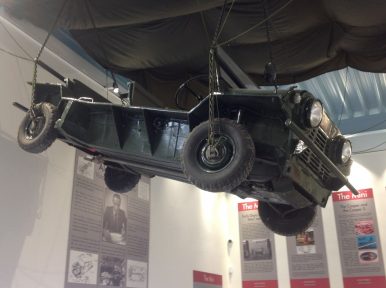 To be fair, there were some neat design features that initially impressed the Army’s top brass: construction was super-simple with only three curves on the entire bodyshell (one on the firewall, one on the floor and the panel that forms the bonnet) and they were light enough to be lifted by four sturdy squaddies using the tubular bumpers as grab handles. Fitted with a removable windscreen Issigonis had also intended for them to be stackable, with the wheels sitting on the wings of the car below, so they could be tightly packed into transport aircraft. Very clever stuff.

Nevertheless, just like the Welbike before it, the Buckboard’s most glaring design flaw was its pitiful ground clearance, hampered by the same low-slung underpinnings and tiny 10” wheels borrowed from Issigonis’s city car. Furthermore, with two-wheel drive and just 34 bhp from its 850cc A-series (detuned to cope with the poor quality petrol found overseas), it’s hardly surprising that the MOD decided to pass in favour of Maurice Wilks’ Land Rover. Clearly, the Buckboard was a far cry from the feisty attack ‘terrier’ that Issigonis had envisioned in 1960; what the BMC had actually built was an asthmatic dachshund that could barely drag its own ballbag out of the mud.

So, quite sensibly, Sir Alec and Co. gave up on the idea of flogging the Buckboard to the army, and in 1963 went back to the drawing board to design a civilian workhorse aimed at cash-strapped rural folk across the colonies – much like the original brief for the 2CV. This time, it worked brilliantly, and the rebranded Moke (an old English slang term for donkey) was marketed as the ‘rugged little runabout with a thousand uses’ seeing service with the Rhodesian Police, the Tasmanian Railways and were often used as TV camera platforms. In the Swinging Sixties, the quirky Mini variant also acquired a cult-like following among Britain’s young and groovy, with UK sales getting a further boost in 1965 after some savvy product placement in the psychedelic TV drama The Prisoner.

By 1968 14,518 Mokes had left the line at Longbridge, with 90% being exported to the sunnier remnants of the British Empire, including the Seychelles, Mauritius and Barbados, where rental companies quickly snapped them up as open-topped island cars’ for the beach hopping tourists. Costing just £4057s 1d, including taxes, it was a hundred quid cheaper than the Mini saloon and offered in just one colour, a utilitarian Spruce Green. But they were ludicrously basic with a single metal driver’s seat, no heater and no fuel gauge; things like a second windscreen wiper, seat belts and even the canvas roof were optional extras that you had to mail order separately and then bolt on yourself. 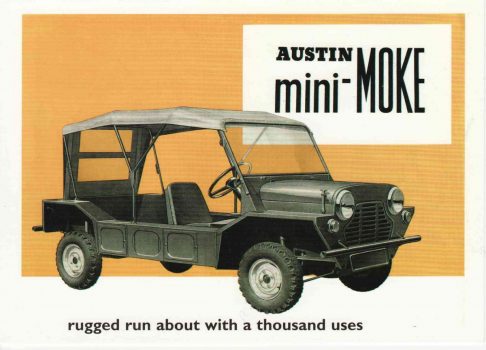 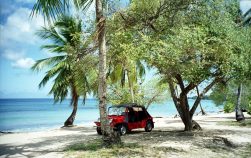 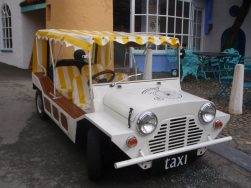 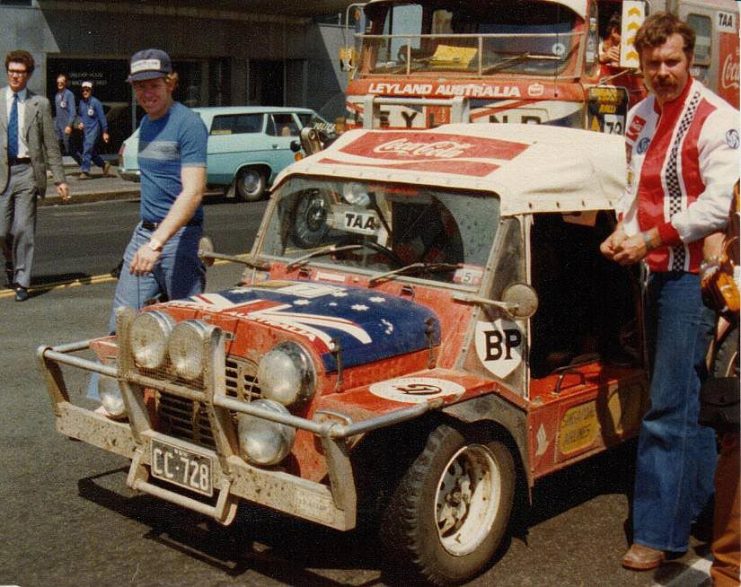 In 1966 BMC started to produce the Moke in Australia with a beefed-up body fitted with 13” wheels, longer trailing arms and sturdy roo bars to cope with all the Outback could chuck at it. In 1977, with this improved design, an Aussie-built Leyland Moke, fitted with a 1275cc Cooper S engine, even managed to complete the brutal 30,000-mile London-Sydney Marathon. By 1993, when the last batch of motors trundled out of British Leyland’s subsidiary plants in Portugal, the mighty Moke had been in production for 30 years; the total production run tallied nearly 51,000 and they had been exported to nearly every sun-kissed corner of the globe that still played cricket. Not bad for a weedy, awkward-looking death trap that had the ergonomics of an iron maiden filled with bees.

Cute, charismatic and rammed full of ‘fun factor’ it’s reckoned that Mokes have cameoed on the big screen at least seventy times, in everything from Emmanuelle to Moonraker and Carry on Camping. As a combat vehicle, the Moke was a joke – but as a hedonist’s part-time plaything on the palm-fringed gravel roads of some far-flung tropical paradise, Leyland’s oddball Mini-jeep was absolutely perfect. It turns out the BMC Buckboard, just like Jamaica’s king of reggae, was born to be ‘a lover not a fighter.’