the late 1970s keen-driving Americans were getting giddy with excitement about a spunky two-seater that the General Motors rumour-mill had been hinting at for a decade. Hopes were high; would the US finally have a homegrown answer to the Porsche 914, or even the Ferrari 308?

By the time the eighties rolled around folks had lowered their expectations somewhat; a strangulated budget sent designers scurrying to the GM parts bins, and Corporate Average Fuel Efficiency (CAFE) legislation meant it’d have to be frugal enough to crack 27mpg. Nevertheless, on paper the first generation Fiero still looked promising: with a 2.5-litre mounted amidships beneath its shell of lightweight body panels, it had wedgy good looks with pop-up headlamps, spoilers and scoops like all the best 80s supercars. OK, so it borrowed suspension from Chevrolet’s Chevette and an antiquated ‘Iron Duke’ four-pot from the Pontiac Phoenix, but at least America’s new sports car would see off those pesky “ferners” from Fiat and Toyota, surely? 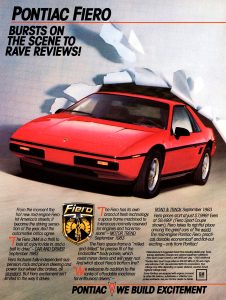 Launched in late 1983, the Fiero screamed ‘Italian Exotic’. Quickly outselling the new MR2 by two-to-one, 137,000 wad-waving ‘Merican gear heads descended on Pontiac dealerships in that first year to snap them up; that was more than the number of X1/9s Fiat had shifted across the US during the previous six, and the Michigan plant had to be put on to an around-the-clock triple-shift just to meet demand. Early reviews in the motoring press were generally good: the Fiero was more spacious than its rivals (befitting GM’s ‘bigger-boned’ domestic market), shrugged off rust and returned a healthy 31mpg. Constructed around a heavy steel spaceframe, onto which its non-structural plastic body was bolted, the Fiero also performed incredibly well in US crash tests, bettered only by Volvo’s load-lugging behemoth: the 740DL station wagon.

While initial excitement and blinkered patriotism buoyed up sales, the scales began to fall from America’s eyes when the car was pitched against its rivals, especially the first-gen’ MR2. While the pushrod four-cylinder Iron Duke had lots of low down torque, it was lazy revving and coughed up just 92bhp at 4,000rpm – fine for a farm truck, but hardly stats to worry Toyota’s eggheads back in Sagamihara. In fact, the US spec’ W10 MR2 had 20 more horsepower and weighed 200kg less. This meant the Japanese interloper could hit 60mph in just 8.4 seconds, versus a positively glacial 11.2 for the portly Pontiac, which was further hampered by its four-speed ‘box. While the Fiero package still had plenty of good points, Pontiac knew that they desperately needed to up their engine game.

Now, GM could have played with forced induction or built a free-revving 16-valve screamer. But instead, using typical American sledgehammer engineering, the men in Michigan just shoehorned in a bigger V6 version of the old Iron Duke. The beefier 2.8-litre Fiero GT now produced 140bhp and could finally keep pace with its Japanese rival … until, that was, Toyota strapped on a supercharger. 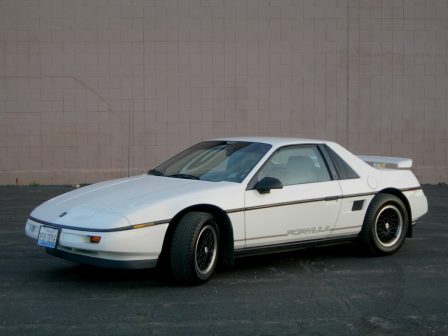 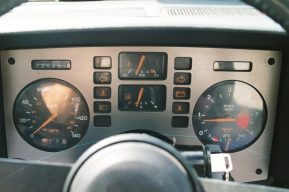 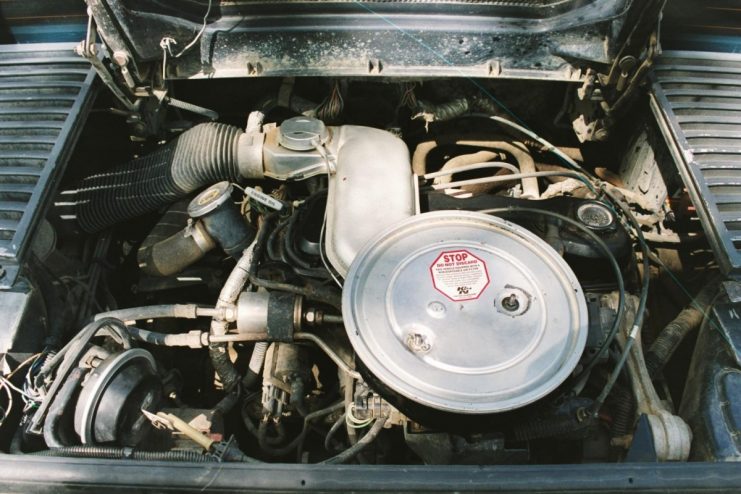 In theory, the GT’s wider track, independent suspensions and all-round disc brakes should have ensured that the Fiero was a fine handling plaything. But hampered by lacklustre suspension, cannibalised from GM’s budget sedans, the Fiero was underdeveloped in this department too – out-performed by the X1/9 that Fiat had launched twelve years earlier. The mid-engined layout should have meant neutral handling, but the heavy Fiero was prone to both understeer and lift-off oversteer. Softly sprung it also felt woolly at speed, wallowed badly in the twisty stuff and suffered from front-end lift above 80mph. However, the Fiero still had one more party trick up its sleeve.

Originally, GM had named its mid-engined sports car after the Spanish word for ‘ferocious’ – but more prophetically perhaps, ‘Fiero GT’ was also an anagram of ‘GoT Fire’, given its alarming proclivity for self-combustion. It still amazes me that American engineers could design things like the Saturn V rocket, containing three-million individual components and two-million litres of liquid hydrogen, oxygen and kerosene, which performed faultlessly to put twelve men (and three cars) on the Moon, and yet they still churned out automobiles that unexpectantly burst into flames on your morning commute to the office.

In the Fiero’s case the problem lay mainly with the ‘84 models, that had a cooling system prone to airlocks and a “misprint” on the dipstick, which meant it was always a quart low on oil and prone to running hot. The 2.5-litre Iron Duke was also lumbered with big batch of defective connecting rods and a wiring loom mounted just above the exhaust manifold. Before a government enforced recall, around 20 engine fires were being reported to Pontiac every month. Nevertheless, GM continued to claim that these fires were mainly the result of poor owner maintenance – which presumably included the two factory demonstrators that melted themselves to the asphalt. One of Pontiac’s “fixes”, dreamt up by some cynical corporate lawyer, was to attaching a little label inside the filler flap that read ‘Check Engine Oil at Every Fuel Fill.’ 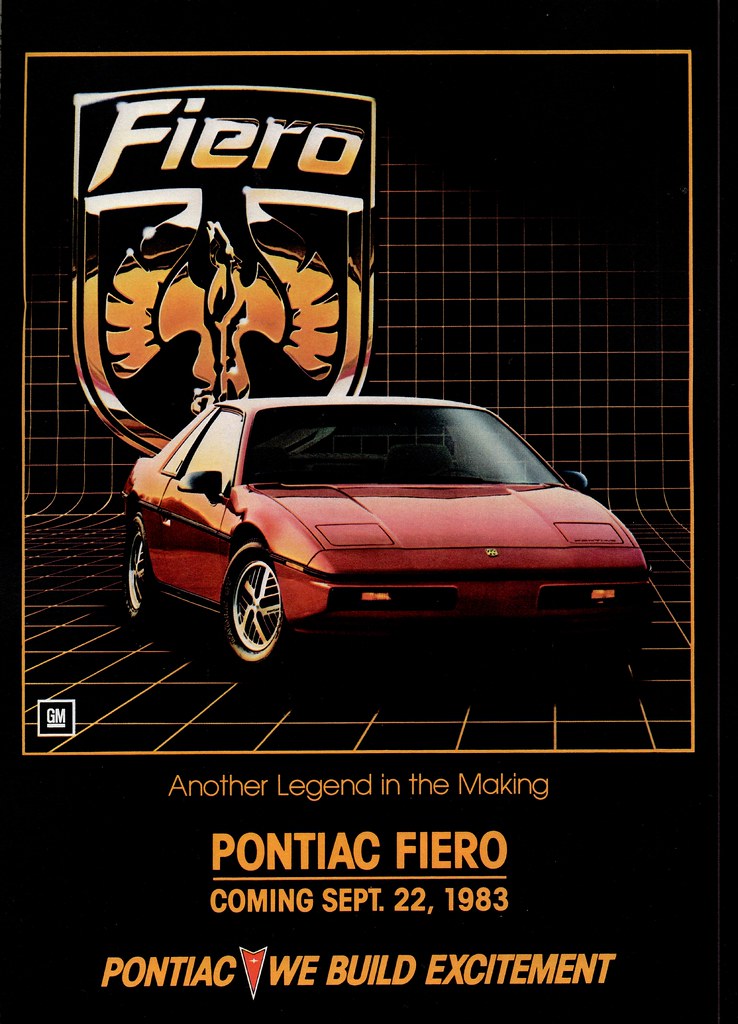 And yet, despite all these gripes, the pretty little Pontiac still sold well, right up to the day it was canned in 1988. With Mazda’s Miata waiting in the wings, it was probably the right decision. But despite all its faults, most Yanks still look back on the Fiero with fond memories; it’s no accident that Badger’s “old lady” was chosen for a starring role in the recent Breaking Badsequel, El Camino. Even the respected monthly motoring mag Car and Driveronce featured the Fiero in its ‘1984 Ten Best’ list, alongside the Mk2 Golf GTI and Porsche 944.

Crude, temperamental and clearly out of its depth, I’m still gobsmacked that, with so many more capable alternatives to choose from, the people of America would vote for this bloody thing … but then again …

To be fair, the Fiero did get better, and less flammable, with each model year – the final 1988 V6 models are the pick of the bunch and prices for good examples are beginning to climb. It’s just a shame that the USA never got the home-grown Ferrari 308GTS that they had originally hoped for. To use a British ice-lolly analogy, the Fiero was less Magnum P.I.and more of a drippy Callipo; built by committee, to a strangled budget and loopy legislation, the poor thing never stood a chance. 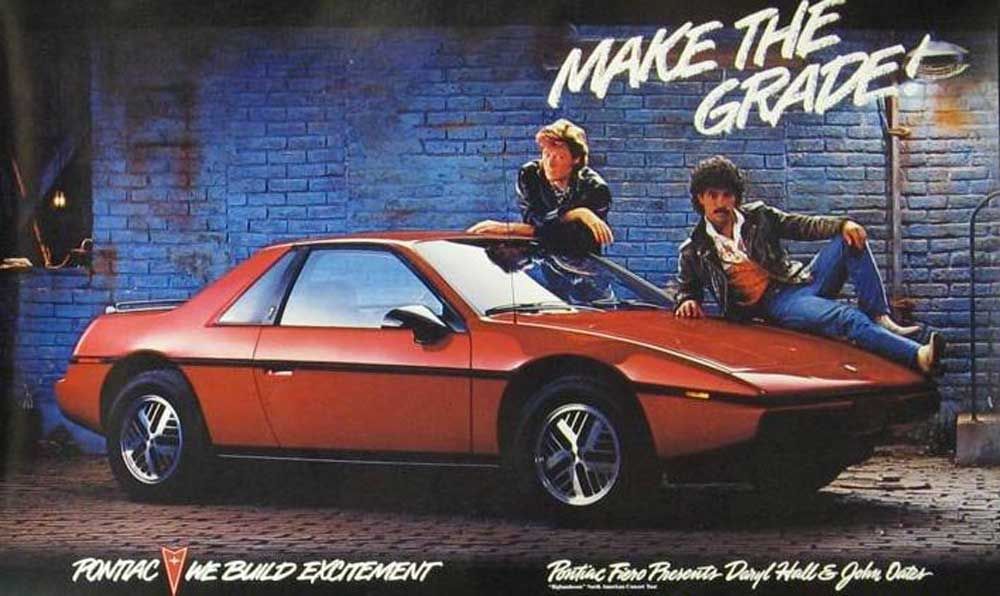