Part 2 (Part 1 is further down this page)

You know those faked-for-telly car resto programs? I’m making one. Only it’s not faked. I have a deadline to get this car built and finished by a particular date or I don’t get paid. No teary reunion with a car that has actually been MOT’d and sat in a warm, dry garage all along as Tim Shaw ambushes the owner disguised as a Milkman, or something. No, I honestly have a matter of a few weeks and tiddly budget to finish this thing and break an old record with it. This damp, grumpy red Italian needs to work or I’m saddled with a fair bit of debt. I could have picked an easier car to work on, something more reliable, perhaps, but I want to build a car for me; a car I’ll use myself once the bills are paid and the cameraman has buggered off. That’s the real reward. The work starts at Garage Sinister in Daventry who are building a simple, low cost roll-cage as in addition to being a pretty useless presenter I’m also a pretty useless driver on track. 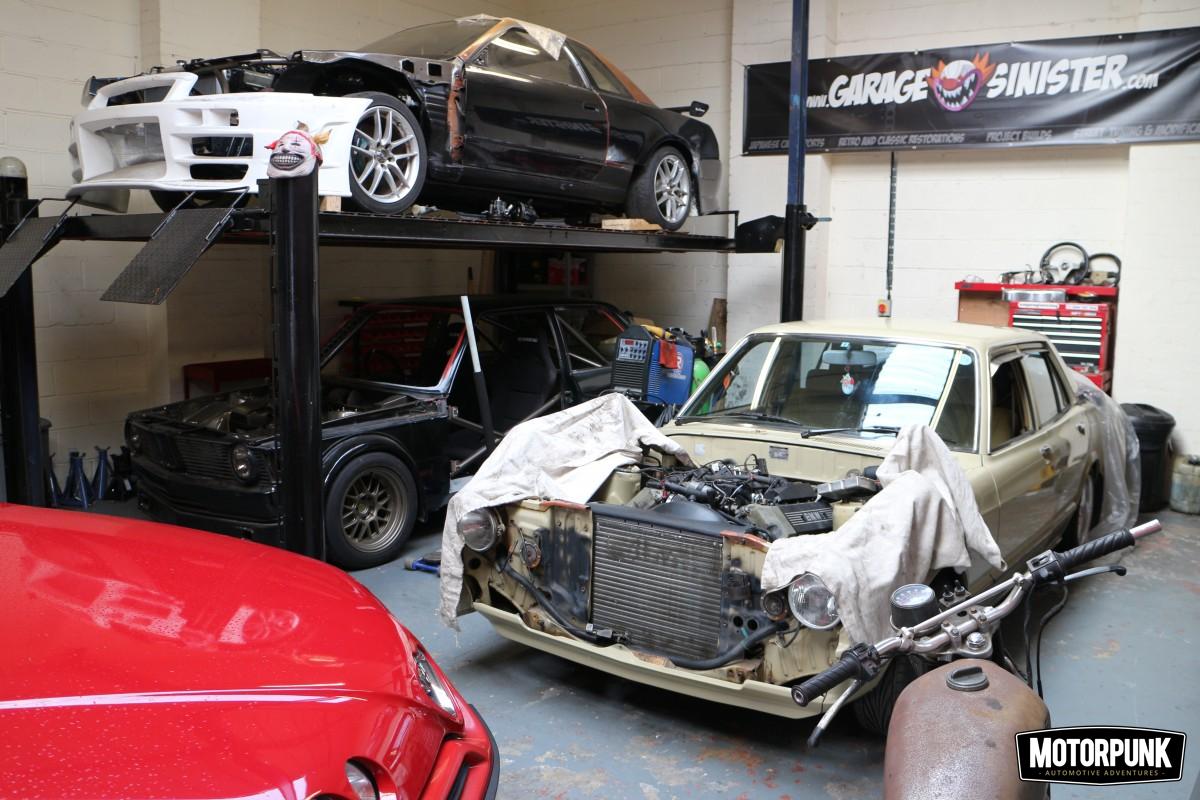 Firstly, the rear bench comes out (two bolts), rear seat backs, (two clips) and the rear interior panels (two bolts and three brittle plastic clips). Soundproofing comes out, too, which only highlights the noise of the exhaust which is blowing somewhere I can’t trace. There’s no rear bulkhead behind the seats, just a bracing bar and a gap into the boot. Speakers, stereo, carpets, half the roof lining, all out – it’s quite therapeutic once you start slashing away. I’m aiming to get 100Kg out of this car and still leave it habitable. Some rough maths shows the benefits of weight reduction. This car weighs 1350Kg as standard and has 220bhp. The power to weight ratio (PWR) is, therefore, 163bhp per ton. Taking out 100Kg takes the ratio to 176bhp per ton. If I had left the car as standard, I would have needed to add 20bhp to get that same 176bhp per ton PWR. So, junk 100Kg of stuff and (sort of) have 20bhp for free! 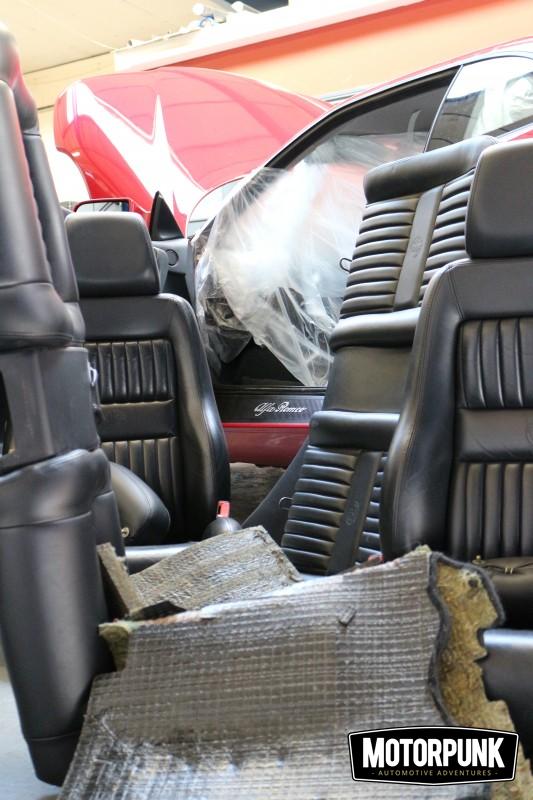 The lads at Garage Sinister normally work on German and Japanese stuff. There’s a crackers Micra, a carb’ed E21 belonging to Mark and another E21 with a 3SGE Beams engine in it and blistered arches awaiting finishing, plus a Skyrine [sic] up on the ramps. I am lightly mocked for my Latin preference. Pipe bending is a serious art. The guys measure the fixed points in the cabin, and feed the numbers into a program called Bend Tech which calculates the cut points, distances between each bend required and the angles of bend. Then the pipe is laid out and measured, and placed in the bender, taking care that it doesn’t twist between each bend. The bending process is a contraption operated by a chap called Lawrence heaving on the end of the pipe as DJ (his name, not occupation, he’s an Engineer) reads off the angle. The material has a spring effect so needs ever-so-slightly over-bending to achieve the right angle as the pipe relaxes. It looks so simple, but as the main hoop is carefully eased into the Alfa, you appreciate the precision required to get it to start and finish in the right spot. Feet welded in, main hoop welded in, struts notched and welded in (taking care not to set fire to what’s left of the interior), and it’s done. 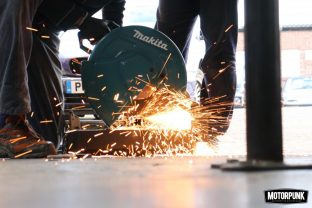 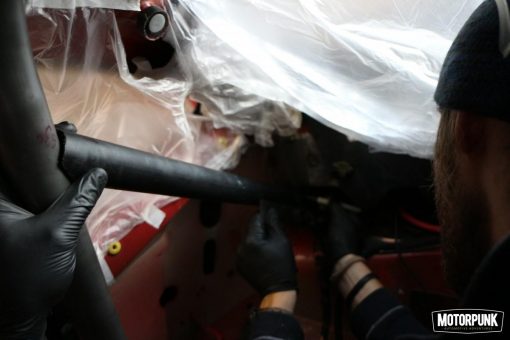 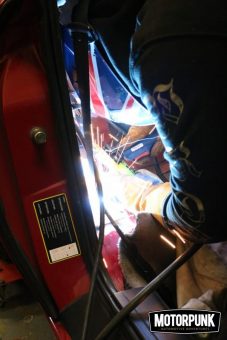 This process was done in a day. Garage Sinister is one of those nice places to hang out, there’s a set of decks playing a soundtrack of high-tempo techno, interspersed with heavy rock, to keep everyone moving at a far old pace. I actually learned a fair bit and they were happy to let me muck in. The selection of cars here is interesting, retro-mod stuff. Have a look at their website, hither, or their garage community over on Retro Rides, thither. All sorts of MotorPunk machinery. The car was wheeled out as the sun set, a good job done. Thank you so much, Garage Sinister. Next stop – Doncaster! An appointment with the Wizards of NoS will give the car the ooopmh to match those looks. There’s no time to spare. Honest! 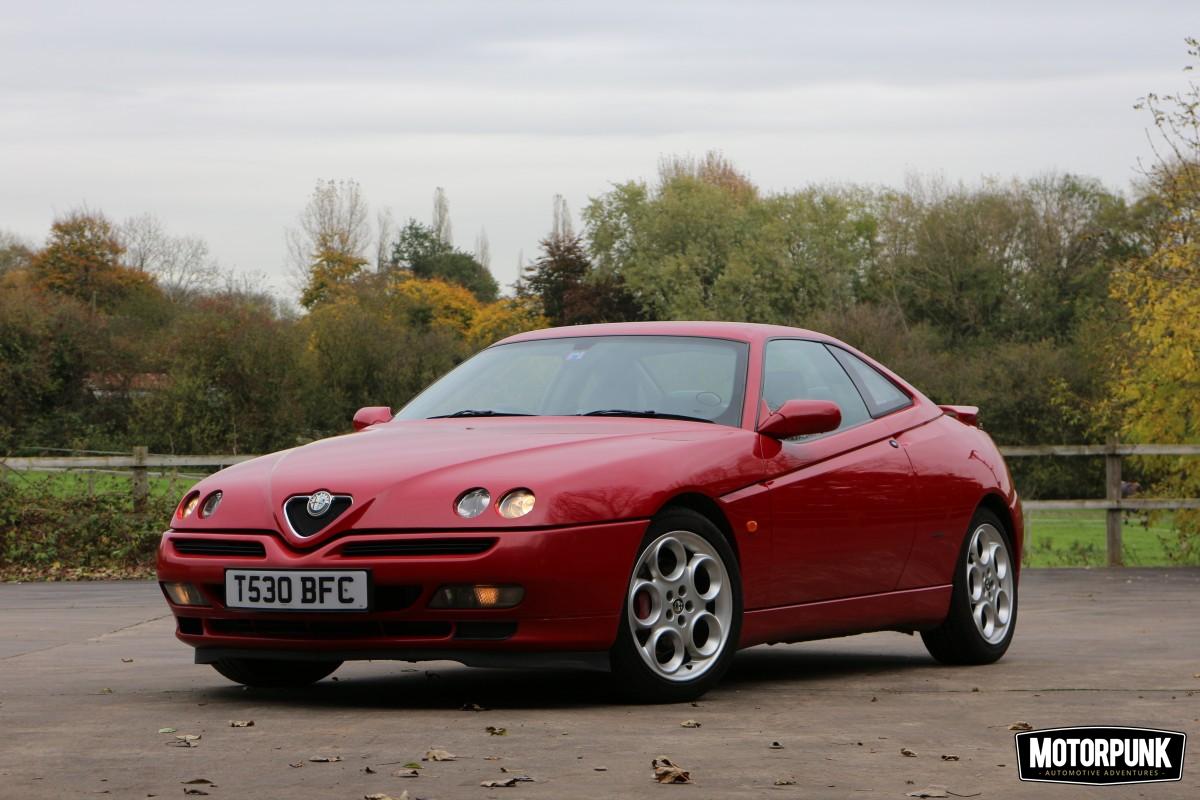 PS – Whatever happened to Tim Shaw?

112 Miles. 112 glorious, busso-propelled miles. Then the clutch went, the dashboard had a disco and the car went on strike. Turn it off, admire those pretty, Pininfarina lines, fire it up again and find that it had fixed itself. This first journey in my recently acquired Alfa GTV V6 is perhaps a microcosm of long-term ownership. I don’t blame the seller, he is a decent chap and had spent a considerable amount of money on getting the car as good as it is. But all logic went out of the window when viewing; those teledial wheels, that Busso V6, black Momo seats, red paint – sold before I’d even sat in it.

Why an Alfa? I’m going to build a car to attempt to set a record, in homage to a hero of mine. There’ll be more on that later but it’ll need better brakes, another 100ish BHP, a roll cage and a four leaf clover on the wing. I’m going to take a different approach to ownership than the seven who previously cosseted the keys of T350 BFC. Instead of taking it to the garage for every (expensive) rattle and (hard to find) electrical fault, I am going to do the bare minimum and keep it alive, just spending my tiddly budget on making it go much, much better instead. And then film it all for Carfection.

I had read stories of understeery, nose-heavy behaviour on the road and can’t ever remember seeing a GTV on a track. Having recently offloaded my Porsche 968 Sport, perhaps the finest handling modern classic, I was wary that the Alfa would be a let down. An aggressive camber (not sure if that’s standard, or of a previous owner had tweaked it), quick steering and decent Michelins on the front means it really turns in sharply. Where you’d let the Porsche wander a little at the front, supple and utterly obedient, the Alfa is harder under power – like a large, council estate dog tugging at the leash, eager to bite someone’s face off. And you’ll forgive it, and perhaps even encourage it, because it’s Italian. 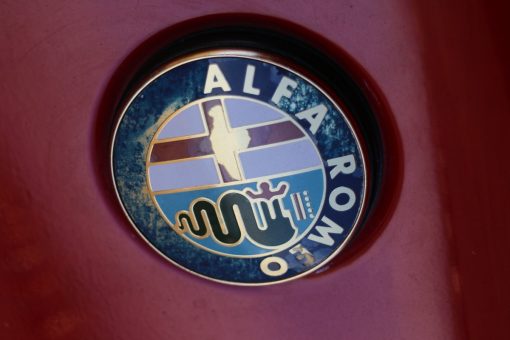 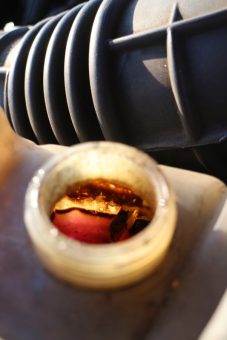 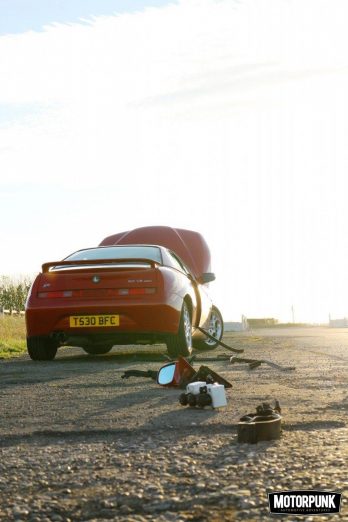 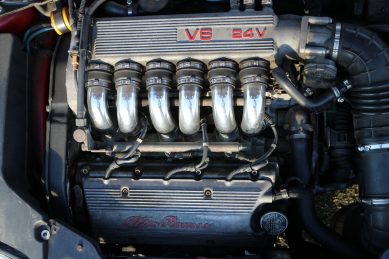 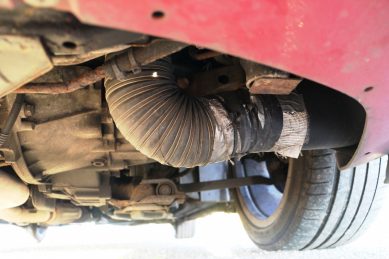 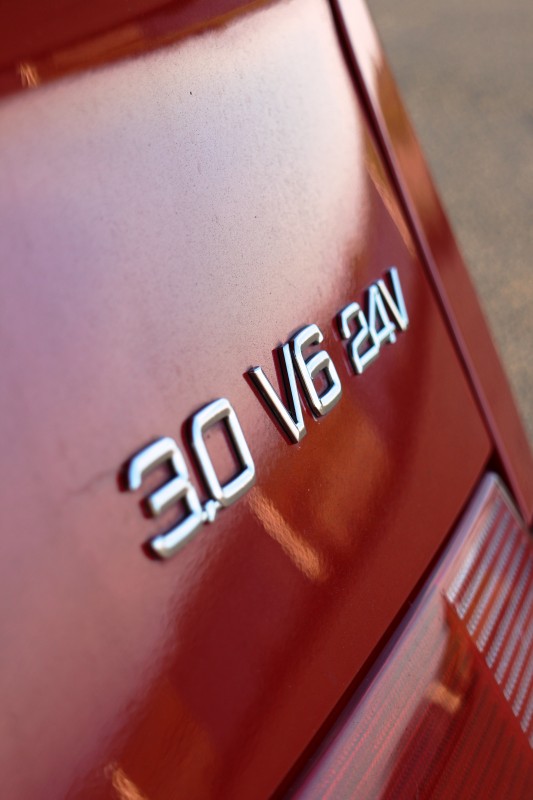 I have never understood how certain marques manage to build cars that, despite their obvious flaws, people are predisposed to love. Jaguar XJRs, for example, Morgan Three Wheelers and 2CVs. None of them perfect by any stretch of the imagination, but their flaws are considered merely quirks, their failures just foibles and excuses are always at hand in the event of the inevitable breakdown. Like my Alfa. My car has recently had faulty heater controls replaced and I note the dead unit is not Italian, but made in Mexico. Dicky indicators? German. 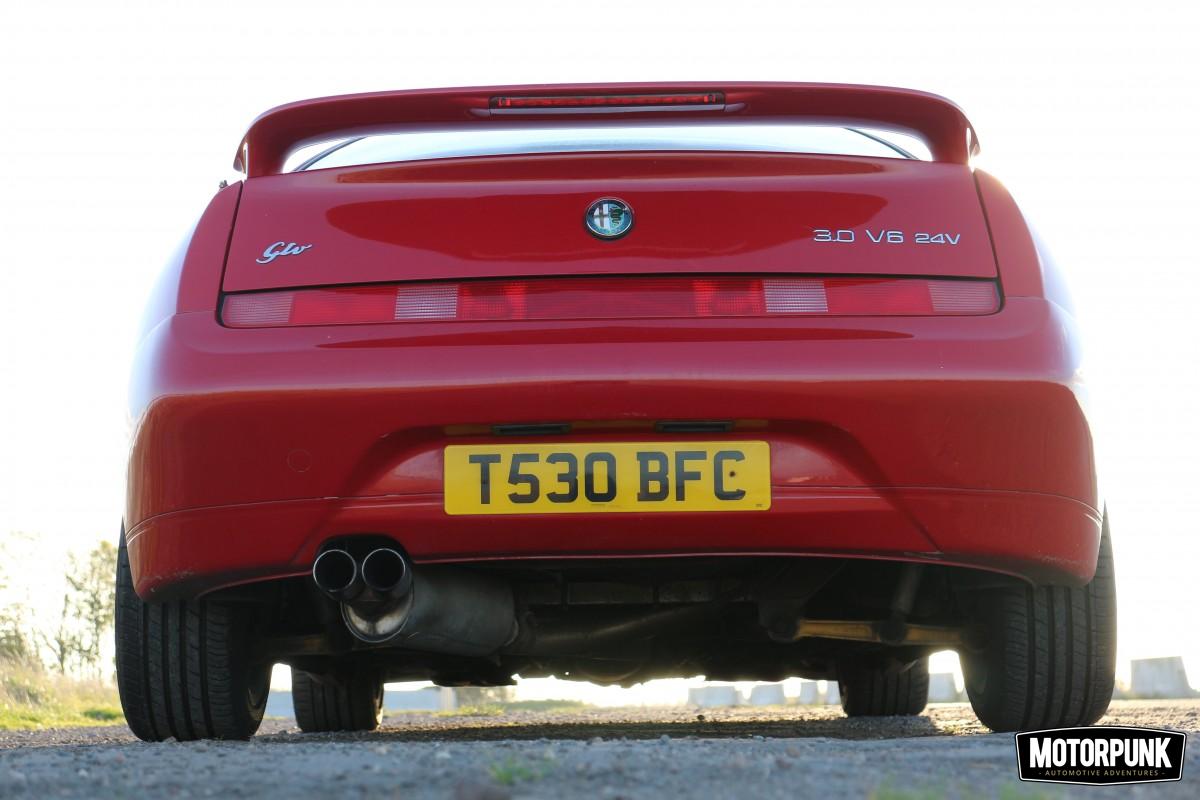 The turbulent history of Alfa’s Arese factory, where this car was born, makes Longbridge look like a Honda plant. It might seem masochistic but it makes ownership of this quasi-exotic even more interesting to me. During one strike the workers, mostly members of the Italian Communist party, pelted delivery trucks with stones when they attempted to leave with finished cars. I have no idea what their grievance was. They then stopped production, threw out management and invited a radical poet to perform a satirical play on the parasitical nature of the bourgeoisie. And these people made my car. 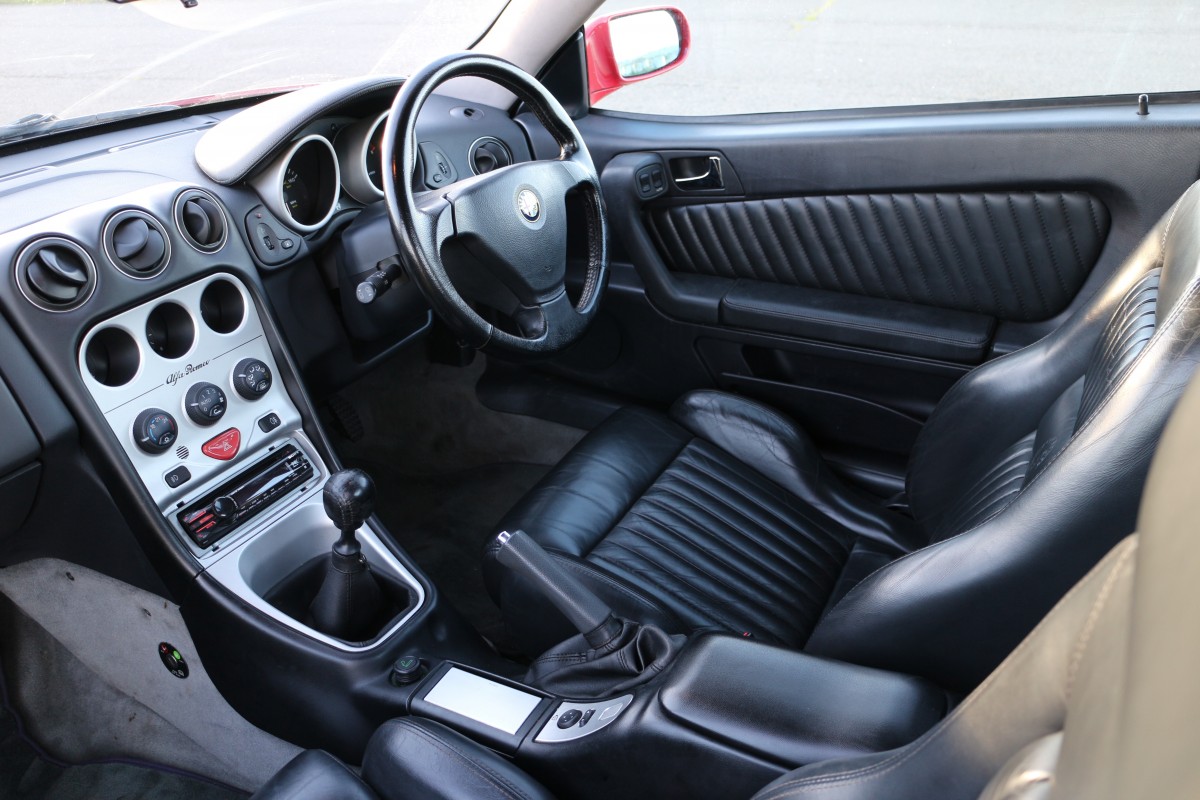 So, a quick to-do list; The clutch is already upgraded to the unit from the later 3.2  but has a peculiar sounding whizz to it, there’s a leak from the exhaust (replacement already on order), the dashboard lights are mostly optical illusions and the coolant is rather sludgy. There are some clonks and it appears someone has been at the wiring loom with a machete. The standard Bremos are the best Alfa had but are, frankly, rather inadequate. The bodywork needs tidying here and there. All stuff I can fix, or cajole others into helping fix, at least. It’s so very pretty, though, that when it next goes on strike I’ll probably just sit and lick it.