At the turn of the millennium, when most hot-hatch boffins were busy lashing turbos to humdrum four-pots, Renault decided that their flagship pocket-rocket deserved something a little more avant-garde. A V6 in the back seats? C’est naturel. Voila!

To be honest, I wasn’t very keen on the standard MkII Clio when I first saw it; I thought it was a glum-looking bugger, with its droopy downcast headlamps. With an over-sized Gitanes shoved in its pouty grille, it’d have been the automotive embodiment of the Gallic shrug. But in V6 guise? Well, they were a different animaux. Lauded by drooling motoring hacks as the ‘world’s smallest supercar’, when it first hit the highway two decades ago, it hunkered down on staggered 17” OZ alloys that were two inches wider than the Clio 172’s. Greedy air intakes bulged on blistered arches like a bouncer’s biceps in a too-small t-shirt, while a pair of sawn-off pipes bellowed from the back.

Unveiled as a concept at the 1998 Paris Motor Show, to celebrate the French motor manufacturer’s 100thanniversary, the first road-going production cars were actually put together by the Rosbifs at Tom Wilkinshaw Racing in their Swedish facilities. Although they looked almost identical to the 1999-season V6 Trophy competition cars, built by Renaultsport for a short-lived one-make series, they actually shared very few components. The most notable exception, of course, was the 2,946cc 24-valve ESL V6, initially developed by Groupe PSA for the Peugeot 406 Coupé. Heavily fettled by TWR, the Trophy put out 280bhp in full racing trim, with the road car detuned to a more sensible 227bhp. But, of course, ‘sensible’ wasn’t a word you’d often hear being bandied about when discussing the Clio V6. 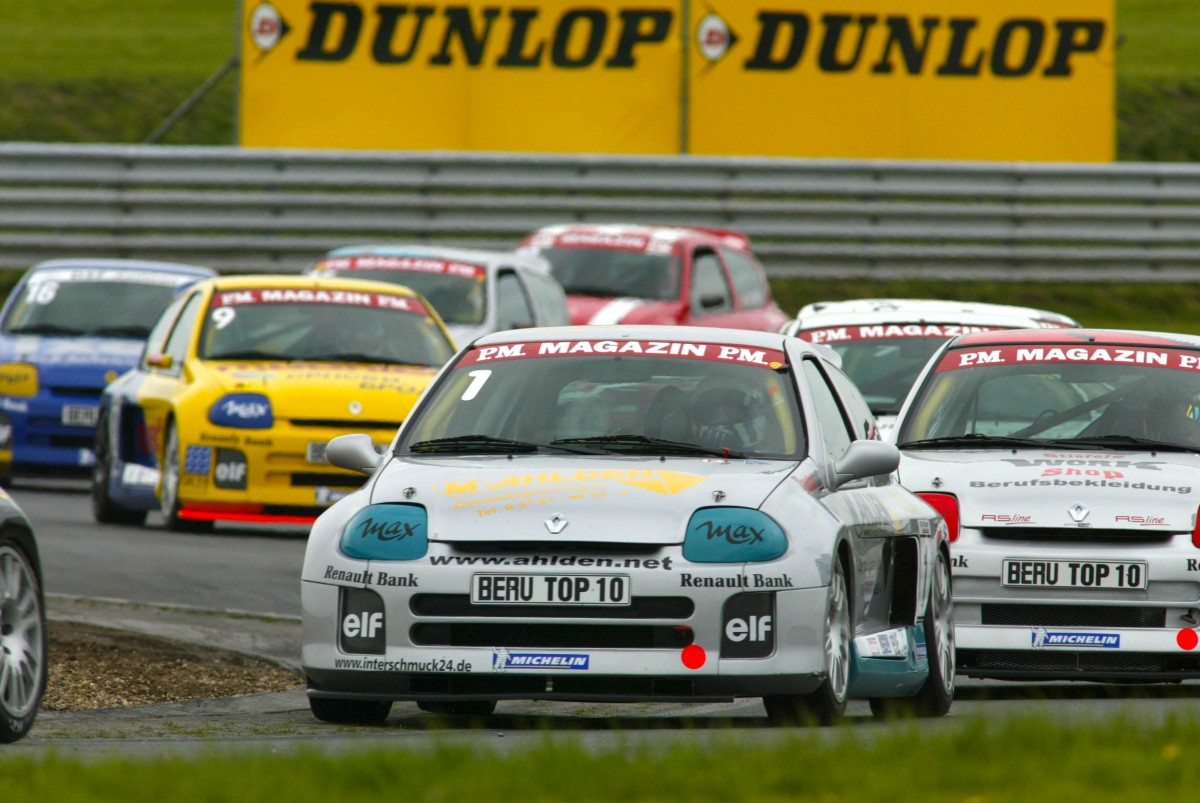 While it clearly paid homage to the mid-engined Renault 5 Turbo of the early ‘80s, only a handful of those road-going examples were built to homologate Le Car for Group-B rallying. The Clio V6, on the otherhand, was built just for the hell of it, as a self-congratulatory birthday treat. How they got it past the accounts department still remains a mystery. We suspect Absinthe was involved.

With a screaming normally-aspirated V6 sitting just behind your lugholes, there was a fabulous sense of theatre about Renault’s quasi-coupe, even if the low-rent cabin was virtually identical to the budget biff-about that this car was based upon. Heavy reworking of the Clio’s chassis, to accommodate its power plant amidships, also meant that the car was 300kg heavier than Renault’s next hottest hot-hatch, the 172 Cup, and only a few tenths quicker to 60mph (6.2 secs versus 6.7 secs) despite costing twice as much (£13k versus £26.5k in 2002).

Those that were brave enough to hammer the Phase 1 Clio V6 around a circuit often said it reminded them of an early 911 … and not in a good way. While it sounded glorious and went like the clappers, its arse-heavy layout and short wheelbase meant that its handling at the limits was a frisky mix of understeer and oversteer. In the hands of a less talented driver it was hard to predict which one would bite you first; the only choice you really had was whether to pee or poo yourself before you hit the Armco.

In ‘real world’ blats across open country, many suspected that the lighter-footed 172 Cup might actually be quicker from A to B, especially when you factored in the Clio V6’s 20mpg. However, what we do know for certain is which driver would arrive wearing the biggest grin. 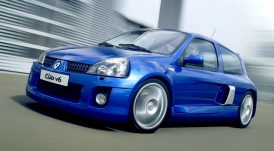 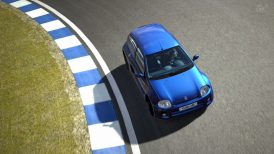 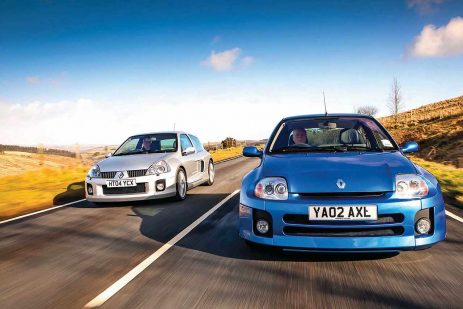 Despite its reputation as a cut-price supercar, by 2003 Renaultsport faced six-cylindered competition from Volkswagen’s 236bhp Golf R32 and Alfa Romeo’s 247bhp GTA. To address the balance, and some of its handling kinks, Renault launched the revised 252bhp Phase 2 Clio V6 (along with an angular front-end facelift and improved interior) to retake the crown as the world’s most powerful hot-hatch.

Just 1,513 Phase 1 cars were built in total, and only 1,309 Phase 2s, before the Clio V6 was axed in 2005. Sadly, chances are, we’ll never seenits likes again; when Renaultsport dabbled with the Clio RS16 concept, a 271bhp hyper-hatch to celebrate its 40thbirthday in 2016, they concluded that a heavy mid-mounted V6 made no sense these days, when compared to modern four-cylinder turbocharged trickery. Nevertheless, as we already know, the Renault Clio V6 – perhaps France’s most ‘want-one’ cars of all time – was never the outcome of any sensible choices. More Absinthe Pierre?

Tempted? Well the only Phase 1 car we could find on sale in the UK today was this pampered example with Platinum Car Sales, based in South Wales. Once part of a private collection, this two-owner Clio V6 has only covered 26,000 miles and could be gracing your driveway for £35k. Good to know I ‘spose; but if I know our cheapskate readership at all, then the chances are that you’ll more likely be looking on eBay to see what a tidy 172 Cup is fetching ! 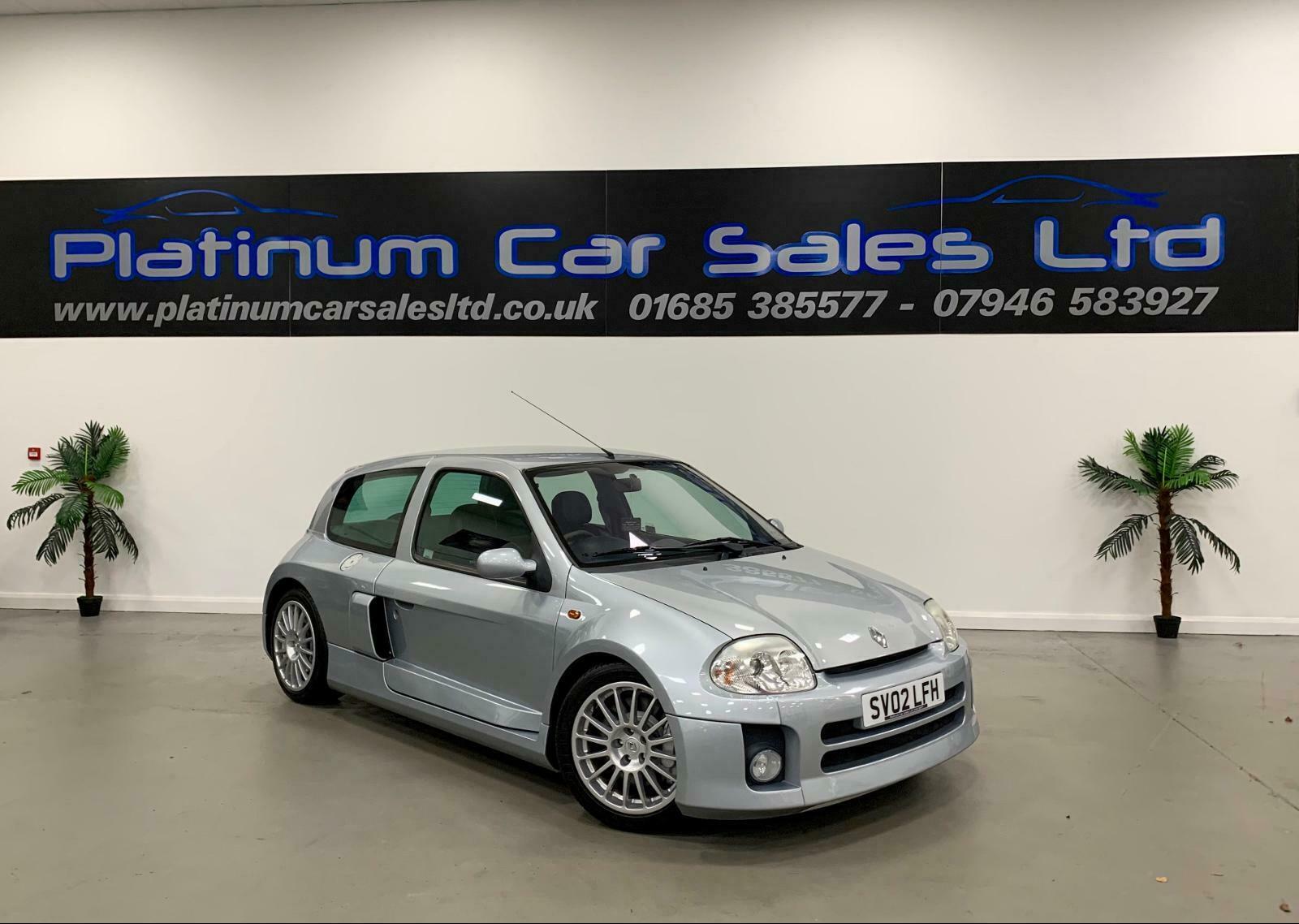