I ruddy loved the Wacky Races. Every Saturday morning – after TISWAS but before Grandstand– my brothers and I would bet Panini football stickers on who was going to win these cartoon motorsport capers using a crude odds system that I’d cunningly devised: I offered just 2:1 on heroic characters like Peter Perfect or Penelope Pitstop, but would have made you a stickerbook millionaire if Dick Dastardly and Muttley ever brought it home for the win. Of course, they never did; they were Hanna-Barbera’s evil equivalent of Haas. However, without fail, I always came out on top on the footy card front; my betting scheme was so suspect it would have made Rob Howley blush.

Bizarrely, before the Wacky Racesfirst aired in September 1968, CBS’s original plan had been to combine each episode with a live betting game show where American preteens would be encouraged to have a flutter on the outcome of each cartoon caper. Talk about different times! Only at the last moment did someone see sense and realise that promoting gambling to impressionable school kids might be somewhat frowned upon, and the idea was quickly canned. Nevertheless, the betting-friendly format remained with all 17 shows, featuring two races per episode, ending with a recap of the results and a reminder of which drivers were standing on the podium.

50 years later some genius on Wikipedia listed every result from each of the 34 stages, as the Wacky Races zigzagged their way across the USA. But since there was no clear points system applied at the time, it has never been clear who actually won the overall race. Until now, that is.

First we had to apply a period-perfect FIA approved Formula One point-scoring system that was in place when the last show was aired in January 1969; awarding 9 points for 1st place, 6 for 2nd, 4 points for 3rd, right down to a single point for coming 6th. No fastest laps, no double points or other Ecclestone-inspired nonsense. With the maths in place, we can finally answer the big Technicolor question that has bugged every pre-pubescent petrolhead who grew up in Britain in the ‘70s [Drum roll please].

In third place, proving that occasionally crime does pay, were the Ant Hill Mob in the No.7 car, the Bulletproof Bomb. Skidding into second slot was No.10 driven by lumberjack Rufus Ruffcutt and his beaver-faced navigator, Sawtooth, in the Buzzwagon. But the 1969 Wacky Races champion of champions, amassing 87 points from consistent podium placings, were the Slag Brothers. The Neolithic wheelmen, Gravel and Rock Slag (who later became the inspiration for the Captain Caveman cartoon series) did it ‘old school’, without the budgets, gadgets and gizmos employed by most the other teams … just think of their No.1 car, the Boulder Mobile, as a front-running Williams. 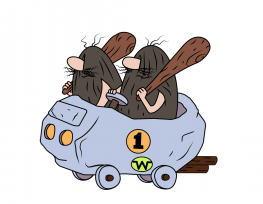 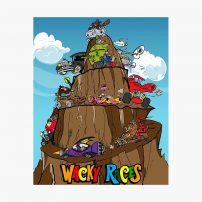 Since the original Wacky Raceswere always hosted on American soil, we thought it was only right that we punched an IndyCar point system into our spreadsheet too. But with fourteen podium places the Slags remained unbeatable. What is less clear however, despite our best efforts, is who won the ‘Wacky Racists’ – a one-off Vizcomic spoof starring Bernard Manning, The Ku Klux Klan, Afrikaner nutjob Terre’Blanche and, at the wheel of his Mein Kampfervan, the Führer himself. As a black comedy nod to the Hanna-Barbera original, it’s probably safe to assume that the winner wasn’t ‘dastardly’ Holocaust denier David Irving and his sidekick Mosley; Unity Mitford in her Blackshirt Pussycat is where I’d have placed my Paninis.