There are so many reasons to love Lotus, here is number 8675 on our list; The time they let a Journalist drive an F1 car on public roads on Christmas day. Now, this took some guts to do. We’ve heard the phrase ‘F1 car for the road’ used to describe modern sportscars before; The BAC Mono and Caparo T1, for example, but these are designed and built as road cars, albeit very fast ones. The type 12 was built purely for (and competed in) F1 and F2, although it wasn’t particularly successful, earning the name ‘Queerbox’ for a persistent and undiagnosable engine problem. It was Colin Chapman’s first attempt at a single-seat racer and so it was quite a leap of faith letting a Journalist loose in it, particularly on the viscous roads of an English winter.

The man doing the driving was a little chap with a big beard, called Denis Jenkinson.  ‘Jenks’, as you may know, was once co-driver with Stirling Moss on the Mille Miglia, quite a character and a fantastic writer. I’ll let him tell the story of how this happened;

“I began to think about doing something appropriate to wind up the year at Christmas time. Other magazines were doing Christmas road tests of unlikely vehicles, with esoteric things like measuring the acceleration of a pogo stick, or the maximum speed of a steamroller. For Motor Sport my thoughts were totally on Grand Prix racing, though I occasionally helped the editor by road-testing the more exciting vehicles. For this purpose I plotted out a figure-of-eight route that pretty well covered the whole county of Hampshire, where I lived, and did timed runs in the faster road-test cars, There were no motorways in those days and, more to the point there were no speed limits on the open roads and traffic was pretty sparse at night. I used to start on the Surrey/Hampshire border at 2am and cover my 180-mile route while the world was asleep. Most memorable was a Mercedes-Benz 300SL Gullwing, which averaged 78mph on the opening stretch Camberley-Salisbury, cruising across Salisbury Plain at 130-135mph (oh, happy days!).’

‘However, to return to my Christmas road test. I thought it would be fun to drive a Grand Prix car on the public roads, and what better time to do it than lunchtime on December 25. With everyone sitting down to Christmas dinner between 12 noon and 3pm I reckoned the roads would be pretty clear. I also bargained on the police having Christmas dinner at the station, because I was intending to bend some of the road rules just a tiny bit. The plan was to cover a figure-of-eight route on the open roads of Hampshire in a full-blooded Grand Prix car in full racing trim!’

‘The big question was what car to use. I approached David Yorke, the Vanwall team manger, and he warmed to the idea. A Vanwall was going to be worth ‘going inside’ for if I got caught. Plans progressed favourably, ands it was decided to move the start to the rear of a friendly public house, rather than the café in the High Street, as it would attract less attention and I could zoom out onto the main road and be gone before anybody realized what was happening.’

‘But as the time drew near David had second thoughts, and duty-bound he had to mention it to Mr. Vandervell. Tony thought it was a riotous idea at first, but then he thought about the consequences if I got stopped by the police and the reflections it would have on his VP Products firm and the Vanwall team. So the idea was called off.’

‘I then approached Bruce Halford to see if he would lend me his 250F Maserati. He was all for co-operating, but the snag was that the Maserati was at the factory in Modena having a winter overhaul. He reluctantly had to turn the idea down as there was no way the 250F could be finished and brought back to England in time for Christmas Day.’

‘I could see the whole thing fizzling out, so I rang Colin Chapman of Lotus. I had known Colin for many years, and he was always one for ‘a bit of a lark’, and while he did not have a Grand Prix Lotus he was quite prepared to lend me a Type 12 Formula Two single-seater and agreed to bring it down to the pub on a trailer on Christmas morning.’

‘Christmas Day was fine and dry, though a bit chilly, and during the morning I did a rapid run round the course in an Austin 105 that Motor Sport had on test, to check the route, weigh up the traffic density, note down any patrolling police cars and generally ‘spy out the land’. True to his word, Colin arrived in a Ford Anglia with the F2 car on a trailer behind. It was in full racing trim, straight-through exhaust, no road equipment of any sort, a full-race Coventry Climax four-cylinder engine and the famous Lotus progressive-change gearbox, ‘wobbly-web’ alloy wheels and disc brakes.’

‘With Colin was Merv Therriault. While he ‘fitted’ me into the narrow cockpit, Colin said: “You’d better borrow our Trade Plates, they might soften the blow if you get stopped”; a kindly thought that had not occurred to me when negotiating for the Vanwall or the 250F Maserati. There was no way to fix the front plate on the Lotus, so we abandoned it and slung the rear one across the tail as a gesture. They were what are known as Limited plates, which meant that the law demanded that my journey was specified on an official form.’

‘Colin cautiously filled in the form: Plate No. 007MH. Date of use: 25th December. Time of Departure: 1.00pm. Registration Mark or Chassis Number: F2/2. Description of vehicle: Lotus. Purpose of use: Test Hampshire. Name of driver: Jenkinson. Name and address of licensee: Lotus Engineering. Signature of license or his agent: ACBC.’

‘It was all very official (well, sort of) and if I was stopped I had to say: “Oh dear, the front plate must have fallen off.” The question of an open exhaust, no mudguards, no audible warning of approach, a racing car on the road, undue speed, and anything else the lay could think up, we reckoned would tot up to a pretty hefty fine, but with a bit of Christmas spirit would not involve a gaol sentence.’

‘While Merv warmed up the Climax engine I donned the crash helmet and goggles and told various friends to stay by their telephones in case I needed help. Colin said: “I’m not stopping, good luck and goodbye”, and he motored off back to London.’

‘The little Lotus was a revelation on the open road and hummed along at 70-90mph on the first section of the route which involved a bypass and some roundabouts. Our beyond Basingstoke, heading for the open plains, I wound the Lotus up to about 120mph in fourth gear, snicked into top and was just getting ready to reach it terminal speed when the revs shot up and there was no drive to the wheels. As I began to slow down I made various checks and it was obvious that something had broken in the transmission.’

‘On this deserted stretch of road there were a couple of houses and, with great presence of mind (not wishing to be found by the side of the road), I turned sharp right into a gateway, still freewheeling at about 50mph, and coasted up the long drive, well away from the road. Wishing to telephone for help, I knocked at the front door of the big house and politely asked if I might use the telephone as my car had broken down.’

‘The household was in a complete flap; Christmas dinner was ready and the guests hadn’t arrived. The lady of the house was on the verge of a fainting fit, the gentleman was trying to calm things, and in the middle of it all there was this chap telephoning for help. They kept rushing to the door and peering down the drive, looking in vain for their guests, and I am sure that the single-seater racing Lotus standing on the gravel did not register with them. They were totally obsessed with their own problem of Christmas dinner being ready and no guests.’

‘I got through to a friend and told him where I was and he said he would come out with a towrope. As I was leaving, the guests arrived and there was pandemonium on all sides. The lady of the house was gasping: “They’re here, they’re here”, the gentleman was wishing everyone a “Happy Christmas”, children were shouting and yelling, dogs were barking…it was all too much. I quietly left and pushed the Lotus out through the mass of cars and wheeled it down to the gate.’

‘My friend arrived, we hitched up the towrope and set off back to base, happy to arrive safely without encountering the law. My Christmas dinner? I didn’t have one, but I remember having quite a few beers to drown my sorrows. When Lotus got the car back they found that a driveshaft had sheared, luckily inside the universal joint, so it all stayed together. They also found that the driveshaft had been put on the wrong way round from that to which they had been used, and the reversal loading was too much for the splines. Among my souvenirs I still have that brown slip of official paper with the date 25th December on it.” 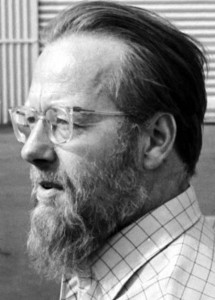 Jenks (pictured above) wrote many books, on Porsche, Jaguar and Maserati among others. He was still doing sprints on his Triumph in his Seventies, and passed away in ’96, after a colourful and exciting career. You can buy his book, Jenks: A Passion for Motor Sport

, which contains this story (and others of a similarly entertaining nature) off Amazon. It’s writing like his that inspires us MotorPunks, maybe it’ll inspire you, too.