Sometimes you stumble upon a character from the past whose life was so exotic, admirable and adventurous you think, ‘This bloke‘s a legend’. Such is the case with my shout for a forgotten Tally Ho hero whose life reads like a Hollywood big budget biographical that DeCaprio or Cruise would be jumping all over, given half a chance.

The reason they’re not is most likely down to the man himself . Born into money, Whitney Willard Straight had it all, talent, intelligence, courage, and looks that were catnip for the ladies. Straight was never quite at ease with the silver spoon in his mouth. The Press referring to him as a millionaire playboy invariably made him spit the dummy. He’s quoted as saying “I often wish I never had a fortune. It is difficult to make real friends and nobody appreciates you at your true worth”. Described as quiet and courteous, he used his family wealth to pursue his racing ambitions, but unlike many a millionaire playboy driver, Straight had the speed to earn respect.

Born in 1912, Whitney Willard Straight came from an American Blueblood family.  His father died from Spanish flu whilst serving in the US Army. His mother, an heiress in her own right, remarried English agronomist Leonard Elmhirst. In 1925 they moved to the Dartington Hall in Devon. A young Straight attended the progressive school they founded that still exists to this day.

Fascinated by fast machinery, he gained his private pilots licence at seventeen. By eighteen he was a Philosophy undergraduate at Trinity College, Cambridge. Straight philosophised he would like to be a racing driver, no doubt encouraged by fellow Cambridge student, and future Mercedes star, Richard ‘Dick’ Seaman. The pair became good friends. Undergraduates were not allowed cars, so Straight kept his private plane near the University. It helped them both get to race meetings all over the country. 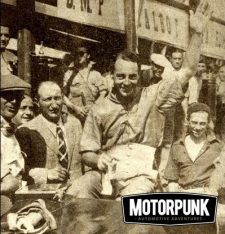 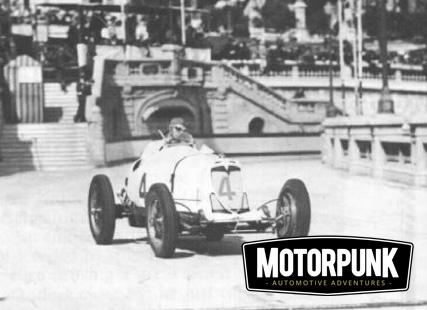 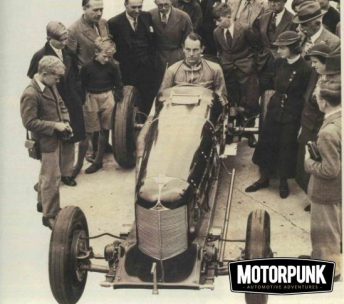 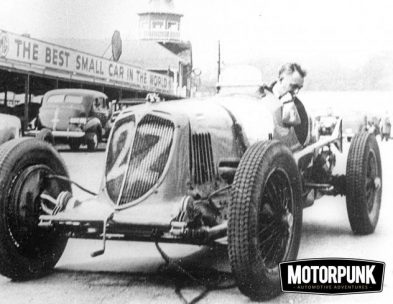 Starting out with a Brooklands Riley in 1931, he competed in six UK events finishing third in five of them. He was a natural, swiftly moving on to more powerful thoroughbreds. He purchased Sir Henry ‘Tim’ Birkin’s record setting 2.5 litre Grand Prix Maserati. In 1932 he broke the speed record at Brooklands Mountain Circuit that Birkin previously set in the same car. In 1933 he pulled off a hat trick of big wins, taking the Brighton Speed trials, the Brooklands Mountain Championship and smashing the record at the Mount Ventoux hill climb, a feat considered impossible off the back of Carriocola’s win the previous year. Straight killed it by some forty seconds, utilising a preselector gearbox and running dual rear tyres for traction on the Maser.

The same year he pulled off a coup at Shelsley Walsh. In the 1930’s it was in its heyday. Imagine Hamilton, Alonso, Loeb et al rolling up there today amongst privateer amateurs and you get the idea. 1933 was a golden year. Raymond Mays went up the hill and broke the standing record set by German wunderkind Hans Stuck. The crowd were ecstatic. Straight went out in the Maserati, and beat him by a second.

By 1934 he was the most successful American driver in Europe (although still feted as a millionaire playboy). He wanted more. The spiralling costs of racing at the top level convinced him that his racing should pay for itself. Aged 22, he launched his own racing team. Whitney Straight Ltd was an impressive set up, utilising mechanics drawn from Birkin’s old crew, offices in London and Milan, and a trio of new 3litre, 165mph Grand Prix Maseratis direct from Bologna. He also hired ex Alfa crew chief Giulio Ramponi after he fell out with Enzo. To tackle the Works teams Straight modified the cars with preselector gearboxes, altered cooling, and added streamlined cowlings of his own design. 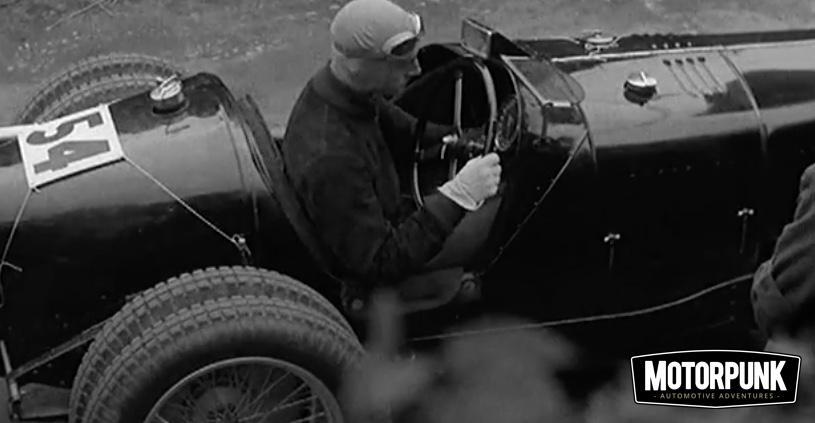 His other team drivers for the season were hotshoe, HC Hamilton and star jazz saxophonist Buddy Featherstonhaugh. Straight, a big jazz fan and friend of Buddy, also played the saxophone, cello and piano. Straight was also a dab hand at arty painting, an accomplished photographer, and a nifty skier. Seriously, Straight was a thirties Tony Stark. He also wins the award for most bizarre media connection; future ‘Carry On’ big fish, Sir Lancelot Spratt, aka James Robertson Justice, worked (briefly) for the team.

In 1934 Straight and his team raced all over Europe including Monaco, and further afield. Straight won in South Africa and at home at Donnington Park before clinching the International Trophy race at Brooklands. His team had a one-two finish at the Albi Grand Prix, (run on public roads) Buddy beating Hamilton to the chequered flag. It was a valiant effort taking on the Works teams, but by years end Whitney Straight Ltd was in the red.

His talent was drawing attention at the highest level. As Mercedes began courting his friend, Dick Seamen, Straight was already being wooed by Auto Union for a Works drive the following year. Straight was torn, knowing that the German cars were superior, but despising the fascist regime. Ultimately it was the turn of his new wife to put her foot down. With regret, Straight gave up motor racing to spend time investing in building up his business interests in his other passion, aircraft. While Seaman went on to stardom with Mercedes, Straight expanded his business interests establishing UK civil airfields and flying schools as well as purchasing an airline, Western Air Ltd. He also became a naturalised British citizen. He worked with the Miles aircraft company to build the Miles Whitney Straight. In a world of biplanes it was a sleek, two seat monoplane for the civil market far in advance of anything else on offer. 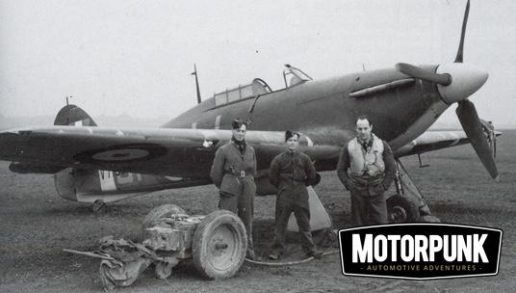 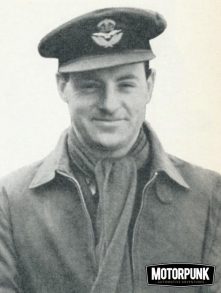 With war looming, the government requisitioned his airfields and aircraft. Straight became an RAF pilot. When Germany invaded Norway he was utilised to identify and set up airbases in the country for the RAF. Straight was wounded during a bombing raid on his embryo airfield. Shipped home to the UK, he was later awarded a Military Cross for his efforts. After recuperating he was assigned to 601 fighter squadron.

It was most appropriate. 601 squadron was unofficially known as the Millionaires Mob. Pre war part time aviators of considerable means, the pilots were famous as gentleman trying to be officers. A 601 gentleman lined his uniform tunic with red silk and wore matching red socks. One squadron member was a director of Shell. He alleviated concerns over fuel rationing by purchasing the local petrol station. Squadron luminaries included Max Aitken, American volunteer Billy Fiske, and Big X himself – Squadron leader Roger Bushell, of Great Escape fame.

Straight joined 601 at the height of the Battle of Britain. By then, many of the millionaires had been killed, wounded or moved on. Straight proved his worth, shooting down a Heinkel and a Messerschmitt in his Hurricane fighter. Promoted In 1941, he became the new CO of Douglas Bader’s former squadron, 242. Straight scored more victories and earned a DFC. In July, flying on a strike mission against the French coast, he was shot down by flak. Straight had meticulously prepared for such eventualities. His flying gear, customised to look like civilian clothes, contained a compass and other kit that helped him evade the authorities. Reaching Paris he called on the US Embassy only to find it closed. He caught a train to Vichy France, planning to cross into neutral Spain. His luck ran out and he was captured. Not for long though. Playing sick, he wangled a transfer to a hospital in Nice where he and two other POW’s did a runner, eventually making it back to the UK in 1942.

Finishing the war as an Air Commodore, Straight returned to civil aviation, working for Rolls Royce and becoming CEO of a fledgling BOAC. He would later be knighted for his work. There was also a long standing affair of some thirty years with a fast lady; Someone with the credentials of a Tally Ho heroine. 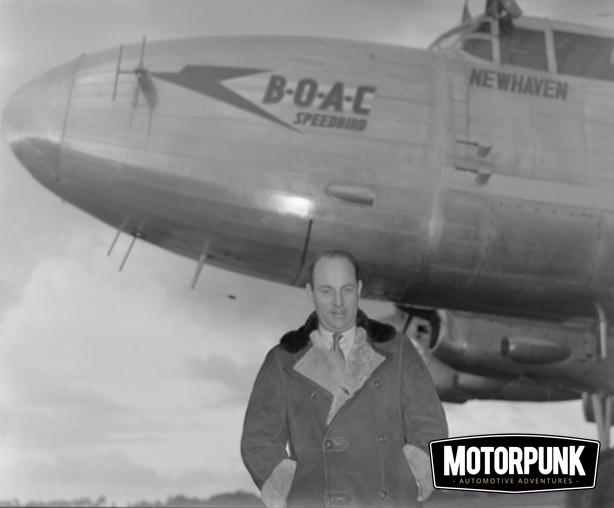 Daughter of Bentley Boy, Woolf Barnato, Diana Barnato-Walker spent the war as an ATA girl delivering combat aircraft to the frontline. If you dig deep enough into the salacious world of ATA gossip it appears she was a racy miss in more ways than one. After the war she became the first British woman to go supersonic (In a Lightning jet fighter no less). They had a son together, Barney Barnato- Walker. Straight died in Fulham in 1979 aged sixty six.

If you made it this far, (Thank you) I should sum up, saying something like, ‘Well there you have it, a grand chap, well done’ but really, I’ve just scratched at the story of Whitney Willard Straight. There’s a book on the Millionaires Squadron. Diana Barnato wrote her autobiography. There’s no book on Whitney though, and no film in the making, which is a shame, although I get the feeling that for this modest Tally Ho hero, it’s just the way he would have wanted it.