We have to admit, there isn’t usually a lot of love at MotorPunk HQ for anything spannered together by the French. Of course, there are the odd exceptions to the rule, like the oddball Citroën DS, Alpine rally specials and the perky little 205 GTi; and we do grudgingly respect their motorsport achievements at Pikes Peak, in F1 and the WRC … although, it has to said, Mr.Duisberg is still fuming about the headlight debacle of ‘66!

However, until quite recently, the one French car I just didn’t ‘get’ was the 2CV. When I was growing up in the 1980s the Beetle still had that surf-scene cool; Minis were still the boy racers’ go-to runabout; even the Moggie Minor had a 50s retro charm about it. As far as I could see the 2CV was only ever driven by vegans, geography teachers and lesbians – usually women – that wanted to cover short distances as slowly, as perilously and as uncomfortably as they possibly could. To the teenage pre-med Master Octane the 2CV seemed like the automotive equivalent of an iron maiden. Now much older, and slightly wiser, I realise that to really ‘get’ the 2CV you have to look back much further than the 80s. 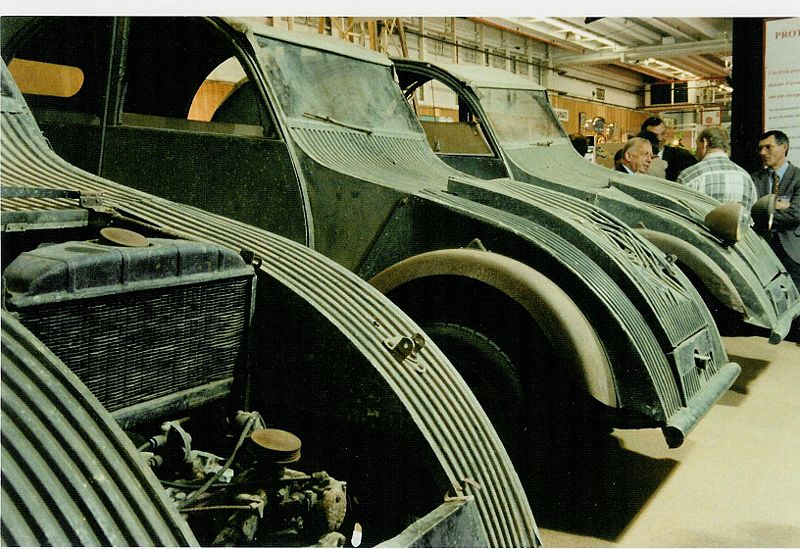 The ‘tin snail’ was the brain child of Pierre Michelin, who became president of Citroën when his tyre company bought the bankrupt French car maker in 1934. His design brief called for a cheap, practical and rugged “umbrella on wheels” that could carry four hat-wearing peasants and a basket of eggs across a ploughed field without breaking a single one; Michelin also stipulated that his little Deux Chevaux should be able to carry a bootful of vegetables (probably onions, and that’s not racist) and achieve 60mpg at 30mph. You see, unlike the Mini, Beetle or Moggie, this wasn’t a car aimed at the urbane and aspirational middle classes; instead, the 2CV was a brilliantly designed, utilitarian alternative to the small holders’ carthorse … unfortunately for the French peasants, unlike Dobbin, it couldn’t be eaten. 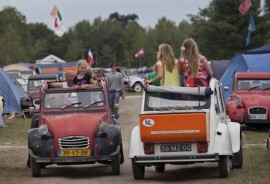 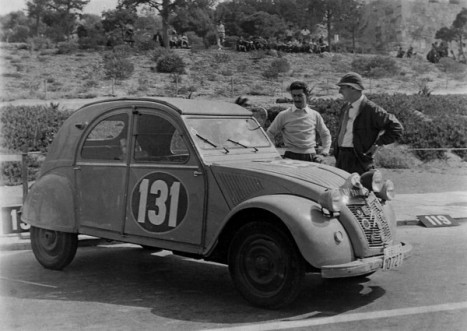 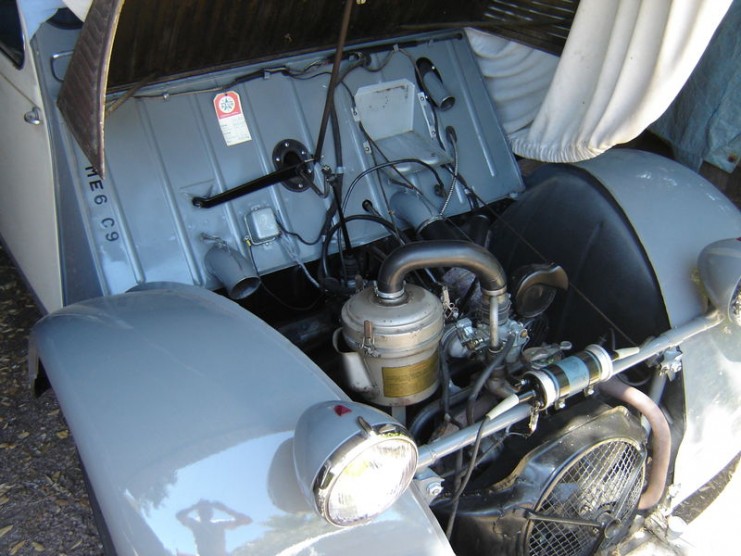 The early version’s corrugated body shells added strength without weight penalty – probably inspired by early Junkers aircraft – and could be whisked off for better access by the DIY spanner-monkey in no time at all; its air-cooled 602cc engine, as used in racing versions of the 2CV (yes, really!), weighs only 45kg and can be yanked out by a single suitably ‘buff’ mechanic and switched in less than 10 minutes. However, it’s the suspension that’s the really clever bit: designed specifically for rough terrain the hilariously soft long-travel suspension can be raised or lowered by altering the tie rods and is ingeniously interconnected fore and aft. It was so good that 2CVs were still used as horse racing camera cars well into the 80s.

Over its 42 year production run around nine million versions of Citroën’s 2CV were lashed together in various factories around the globe. Unsurprisingly, in the 50s and 60s the cheap and rugged runabout saw a lot of action overseas in the outposts of the crumbling French Empire. Many of those cars had been ‘ruggederised’ with Citroën’s in-house PO kit (which stood for Pays d’Outre-mer – overseas countries) which beefed up the chassis, added sump guards and allowed the car to breathe on the dusty back roads of colonial North Africa. The ultimate PO spec’d cars were the Mehari (think Mini Moke in a Gallic stylee) and the très rare twin-engined 4WD 2CV Safari.

Interest in the 2CV spiked again during the oil crisis of 1974 when the French marketing men spotted an opportunity to showcase the frugal 2CV’s exemplary off-road abilities and easy roadside maintenance. Citroën sponsored Rally Raids, such as the Paris – Persepolis, and attracted over 500 teams of young adventurists aged 18-30 to participate in the 13,500km Raid across Yugoslavia, Greece, Turkey and into Iran. To enter the Paris – Persepolis all the well-heeled Frenchman had to do was pop into the local Citroën dealer and order a new ‘tin snail’ with the factory fitted PO kit, stock up on Absinthe and commission a new safari suit from his favourite Parisian tailor. Ah, le good old days! 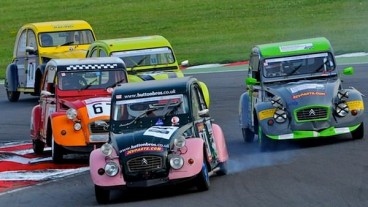 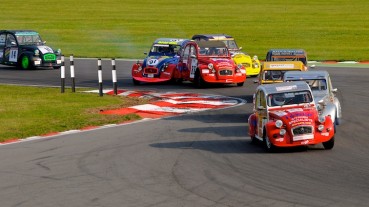 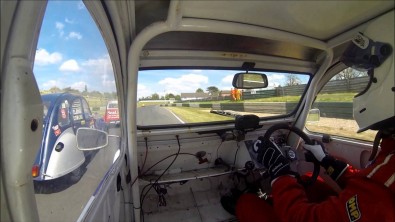 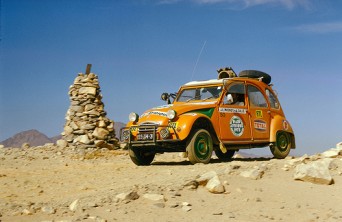 Today, 2CVs are still the go-to vehicle for low-budget enduro rallies and several have successfully completed the epic 15,000km Mongol Rally. But perhaps the biggest contingent (usually involving 40+ 2CV and Mehari) enter the Belgian-run Toureg Trail Challenge for 2WD classics heading south from Barcelona through the French-speaking ex-colonies of west Africa to Dakar each year.

In 1981 007 hooned a bright yellow 2CV through a Spanish olive grove in the rather dreadful For Your Eyes Only and demand spiked briefly (particularly in Chile for some weird reason), but generally, throughout the ‘80s, sales steadily declined. Increasing harassment from the EEC’s smog cops and crash safety eggheads meant that Citroën finally pulled the plug on the little Deux Chevaux in 1990. In the dry Saharan outposts of French-speaking Africa ratty old 2CVs never seem to die; the constant stream of south bound rallyists in their PO’d Citroëns keeps the African mechanics well supplied with parts and donor cars. While in the affluent West, the quirky bug-eyed runabout is enjoying new-found cult status, especially in the States, and over 3,000 much-loved survivors are still bimbleing around back roads of Britain. 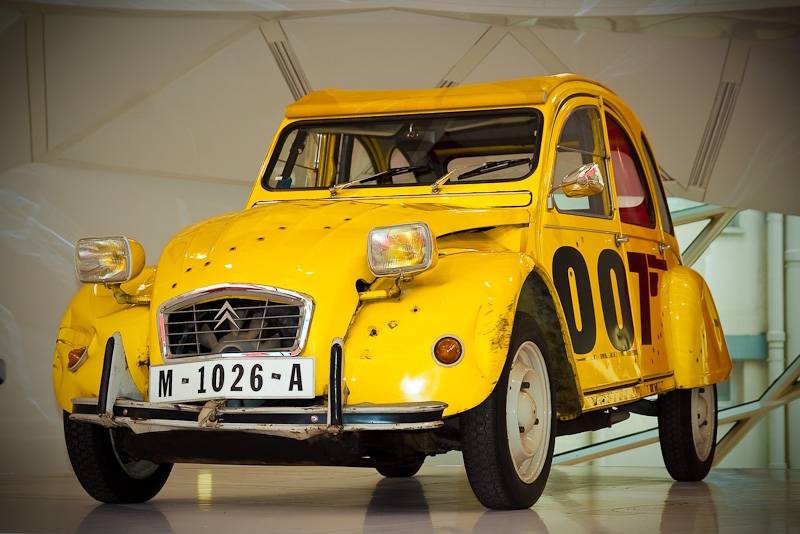 Since all 2CVs and their derivatives qualify for MotorPunk’s CarClub 18-30, owners can consider themselves, herewith, cordially invited to the next annual jolly. Feel free to bring your civil partners and we’ll even lay on a vegan option at lunchtime.