We don’t often do a conventional car review on MotorPunk but having run up lots of miles in our favourite little sports car recently I thought I’d share my experience; 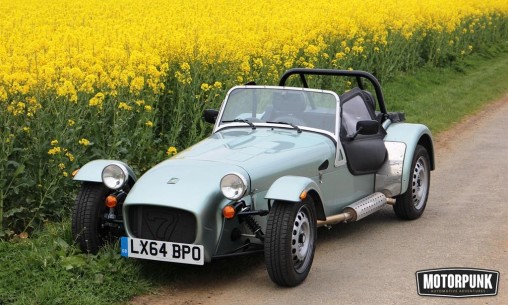 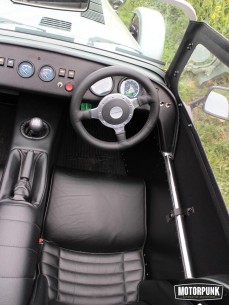 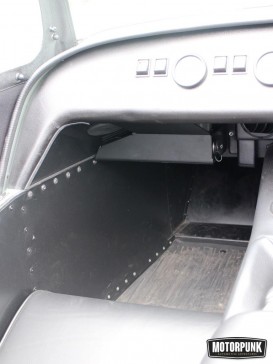 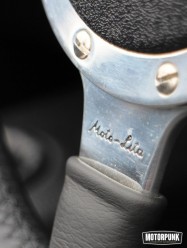 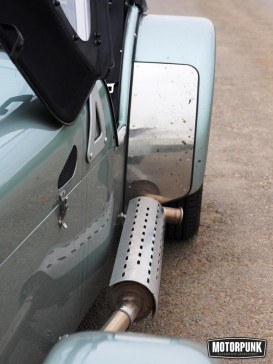 Boarding; Welcome aboard Caterham 160S, bound for an apex. Please take your seat quickly, the other passenger waiting to board will have their elbows in your goolies if you attempt to sit down at the same time. Your seatbelt is fastened, adjusted, and released like a normal seatbelt. In the event of an emergency you’re stuffed. No oxygen mask will fall from the panel above your head, nor will you find an airbag in the Moto-Lita wheel in front of you. To open the door in an emergency simply undo two press studs. In the event of landing on water, or if it just rains a bit, you will get wet. Your passenger’s knees must be stowed for take-off and landing because there’s a steel box protruding into their footwell. Enable flight safe mode. It’s snug in here but we’re going places. 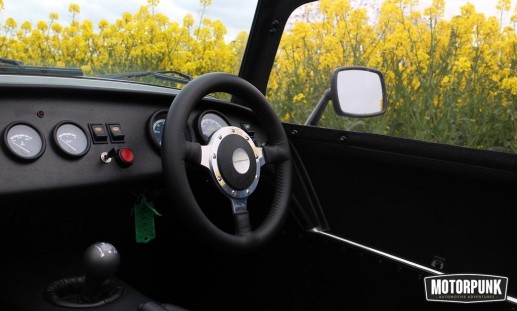 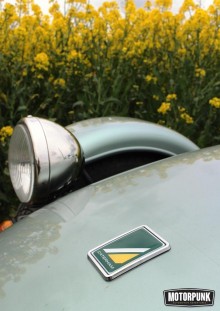 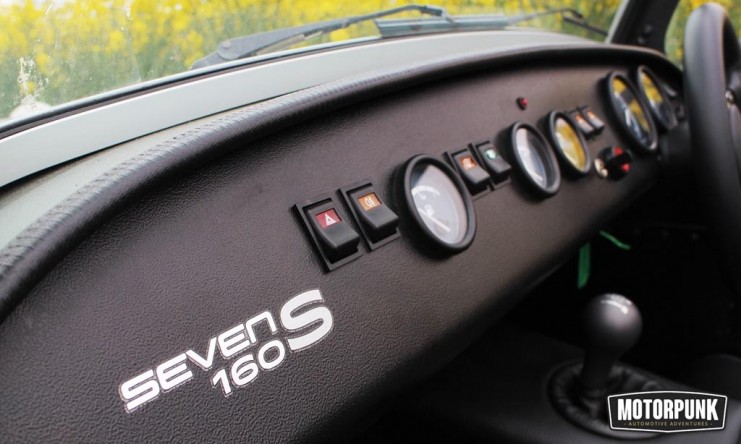 Controls; The ignition is hidden behind the black plastic fascia, getting the key in or out is like trying to complete a Chinese puzzle, one-handed and unsighted. Then there’s the little immobiliser fob which must be waved about behind the dash and you’re ready to push the red starter button on the dash. Steering via the Moto-Lita wheel is unassisted, meaning it’s a bit hefty when three point turning. The turning circle seems massive. There’s a primitive heater, activated by pulling a cable by your right knee. The roof is made  from poles, velcro, vinyl and press-studs. It is rubbish but you won’t want to drive with it on anyway. I was told that if water should come into the cabin to just drive faster so it didn’t. My kind of solution. The bottom half of the door has a scoop moulded into it so your arms fit in the cabin. If it’s hot with the roof on, you can hold the bottom of the door open with your elbow to allow fresh air into the cabin as you’re driving. I drove c.500 miles like this. Am I complaining? No. 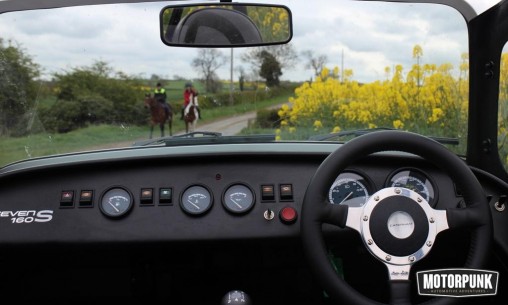 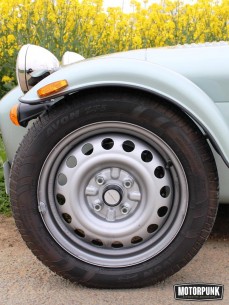 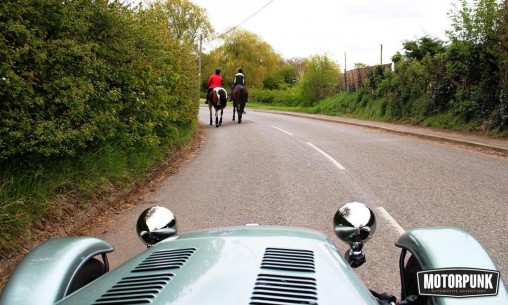 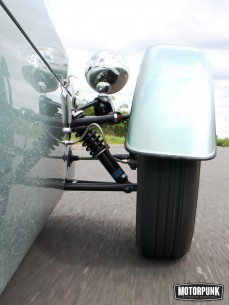 On the road; The physical characteristics are exactly what you’d expect from such a scrawny car. Brilliant steering feel, a pointy front end, and a bit of welly needed to get the back out if you’re that way inclined. On the road, I am not. What isn’t apparent from the pictures is the way the engine works with the rest of the package. The 800cc turbocharged 3 pot has a rather narrow torque band, which would infuriate in anything heavier, but here as the turbo runs out of breath you can continue to rev to around 7000RPM and still feel the pull of the engine as the 160S is so incredibly light. On the road you waft along on the torque from the turbo then to overtake almost treat it like a bike – thrapping up the red end of the rev counter. Brakes need a good shove, they’re unservo’d, but once you’re used to them they’re fine. The pedals are incredibly close together. I have average sized feet [and an average sized penis – co-incidence?] yet need to wear the right footwear in order to avoid tramping on controls inadvertently, or just drive barefoot, as my Viking-sized co-driver did on our visit to Blyton Park. 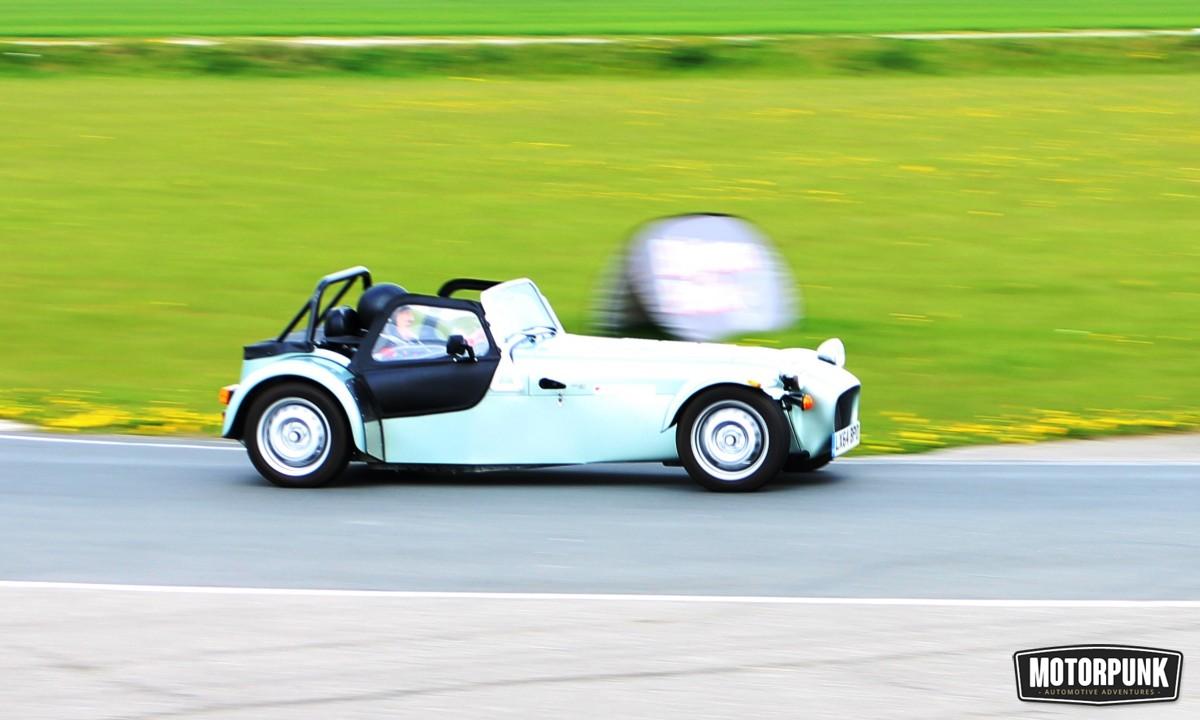 On the track; Blyton is a great circuit. Curves to entertain and run off for when it goes wrong. We were there with MotorPunk’s Car Club 18-30, the 160 qualifying because the basic chassis can trace it’s roots back to when Caterhams were Lotuses in black and white photos. “It’s really not a track car” said the nice chap from Caterham when I collected the car. I disagree. A trackday is not a competitive event. There’s no timing, no first place, none of that nonsense. I don’t want to come first – I want the biggest smile. We whizz around in circles, slicing apexes, occasionally outbraking ourselves and driving just for our own amusement. Ordinary drivers, like me (and perhaps you?) just want to enjoy the feeling of nibbling at the fringes of the mechanical limits of a machine. These limits are quickly reached in the 160, and predictably, and before know it you’re happily scything around corners with tyres wailing with a feeling of supreme satisfaction. Everyone wanted to try this car. Michael, MotorPunk’s on-call Lawyer and experienced Caterham racer, loved it; “It’s everything you need in a sports car”. I couldn’t put it better myself. The 160 is the base model in Caterham’s line up but if you get hooked on this stuff you can try competitive motorsport in their academy or simply buy a punchier model. My opinion though, reader, is that you will have just as a big a smile playing with 90% of the £16k 160’s capabilities than you will at 50% of the pant-cackingly quick £50k 620R’s. 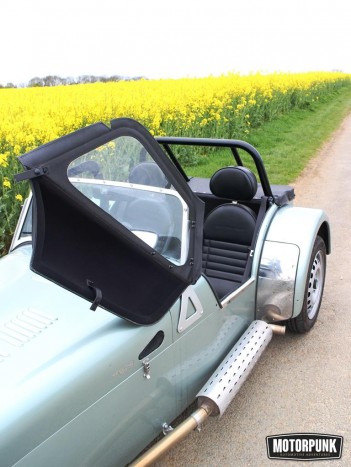 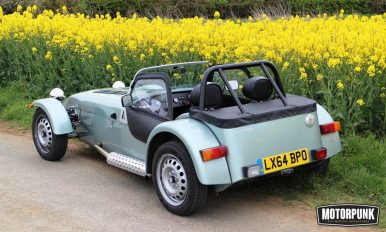 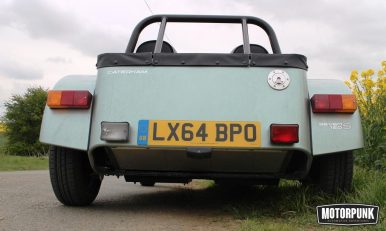 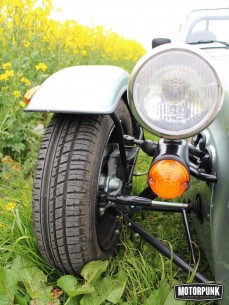 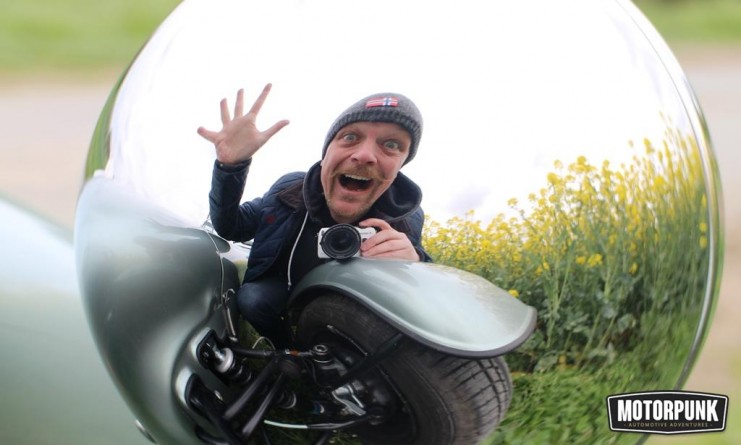 Outside; The 160S (‘s’ means you get a screen and a few other essentials) looks wonderful. Steel wheels and chromed headlamp backs add to the retro look. I’d go for a stronger colour than the heritage green you see here but it’s so pretty, particularly with the roof off. The boot is a handy size too although you’ll need it to stow the roof, which does seem to mark easily. I’d lose the warty side indicators if I could, but that’s it. Passers by love this car. Cyclists wave, horse riders nod and insects die a glorious death on the number plate. Car geeks appreciate the engineering that has gone into keeping an ancient design so fresh competent . Junior Duisberg insisted on a driving lesson in it despite not being able to reach the pedals or see over the long bonnet. It’s an inoffensive sports car, a rare thing, something your other half will want a trip to the seaside in, rain or otherwise, and an iconic British design that remains popular with everyone, everywhere. Sorry, I’m sounding like an advert now. 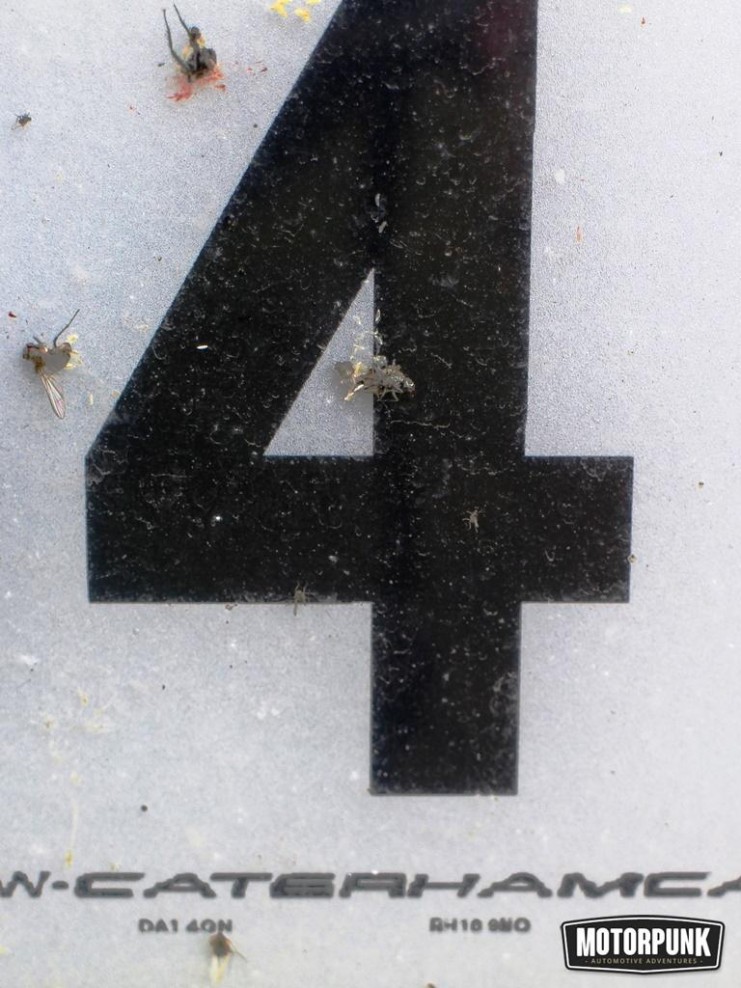 Caterham numbers explained; 160 means 160BHP/ton, S means road and R means track (if you’d prefer a different trim). My car gave 80BHP at 7000RPM, 0-60 takes 6.9 seconds and on paper it does 57MPG. It weighs c.500Kg. Top speed in MPHs is an ‘undred. Prices, then; £16k gets you the basic 160S which you’ll have to build yourself, we’d go for the R with the windscreen and heater and have the chaps in Crawley build it for us, taking the price to £22k. That is chunk of money, true, but when you look at the prices of used Caterhams the cost of ownership looks very appealing. The cheapest used Caterham on their website is still £15k, for example. People buy cars like this with their heart but there’s plenty for the head (and other half/Accountant/Taxman) to be happy about too. 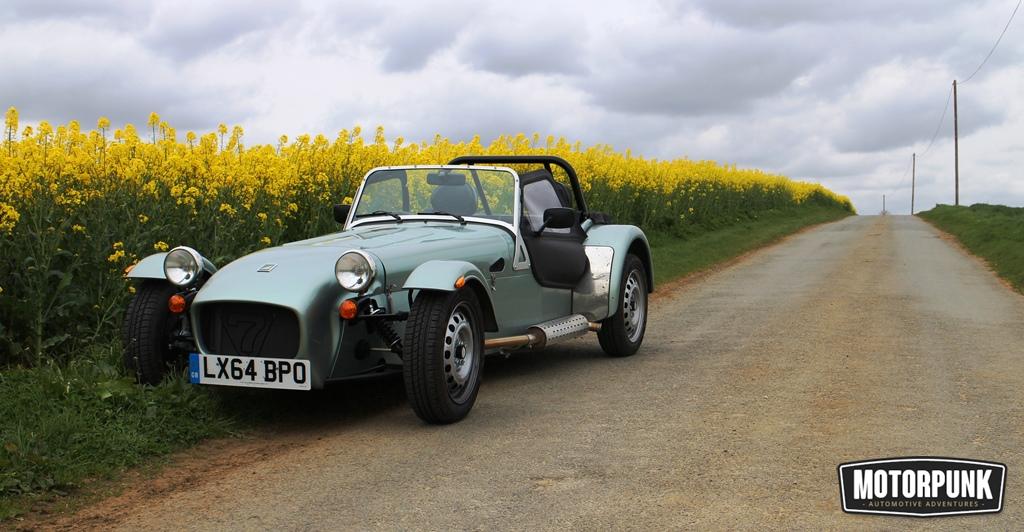 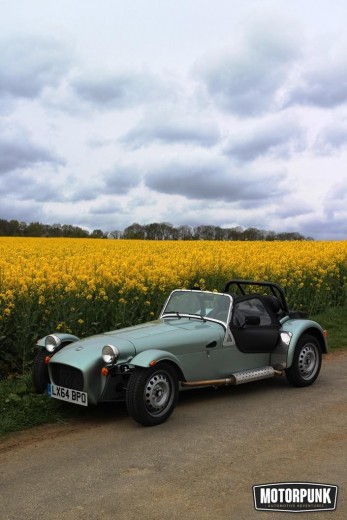 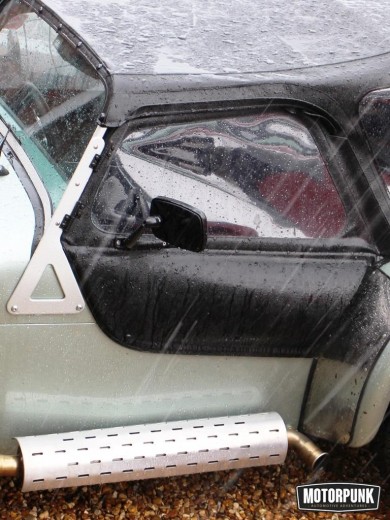 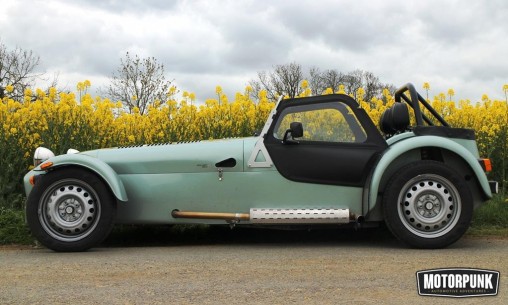 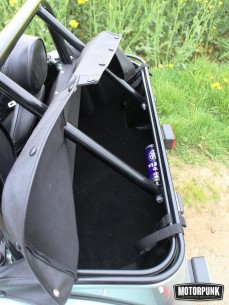 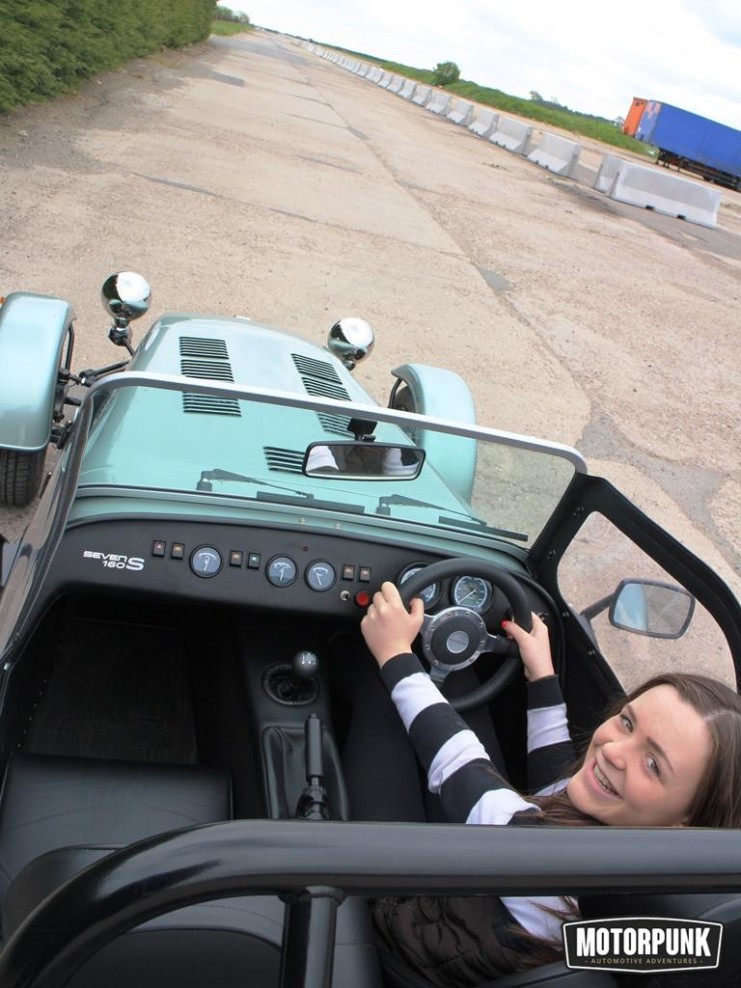 Eventually I had to return the 160; The roof came undone at speed in the wind on the way back. The filler cap dangles just where petrol will drop on it. I managed to snag the rear number plate light fitting and my co-driver singed a testicle on the exhaust. Some people overtook me on track. I never managed to get the keys in the ignition without severing bits of myself. It rained and I got wet. But – I smiled until my face actually hurt. The Caterham 160S has everything you need from a sports car.

If you liked this, perhaps you’d like our video on the history of the Caterham 7. Leave us a comment below and let us know what you think of the Caterham 160, thanks for reading.