The 1963 East African Safari Rally can lay claim to the title of a shitshow, virtue of weather inspired chaos. Already notorious as the toughest of rallies, heavy spring rainfall annihilated the field of entries and humbled European Works teams. Eighty four cars started the event, only seven would qualify as finishers. Surviving floods, mud, crashes and wildlife, they would earn the nickname The Unsinkable Seven. Many considered the result a freakish one off. They were wrong. 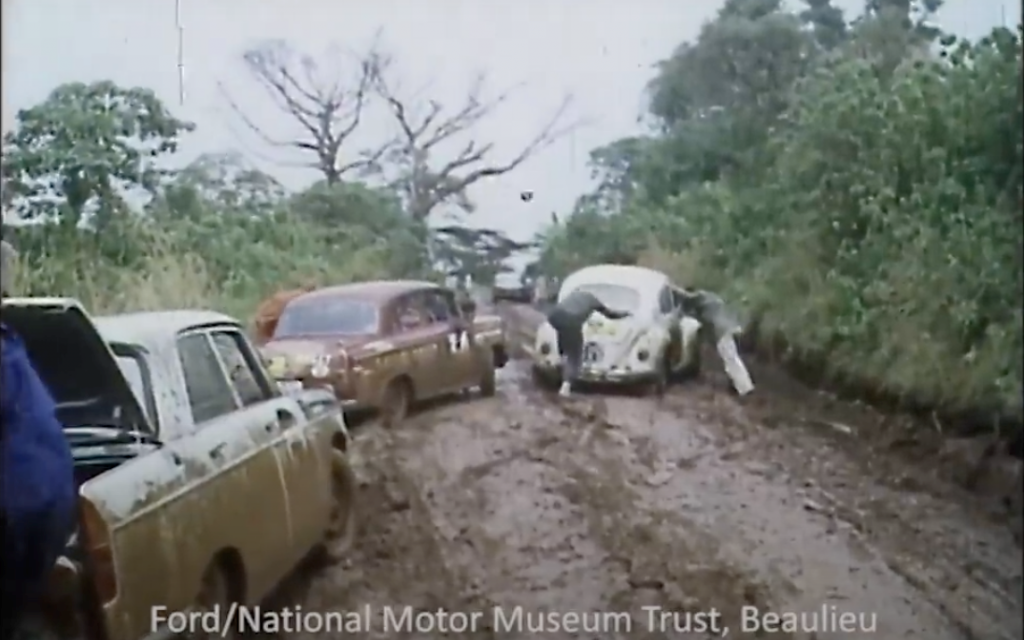 The 1963 Safari attracted a bumper crop of entries from European works teams. It also featured the debut of Datsun. It was the first year the rally counted as points toward the World Championship. Ford sent a full squad of Cortinas with experienced Works drivers to take on the challenge, with a strong supporting cast of Ford Anglias and Zodiacs. A Ford film crew was on hand to catch the Blue Oval swamp the finishers board. By journey’s end, a solitary Anglia offered slim pickings in the final standings. 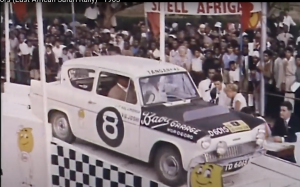 A cornucopia of international machinery took part including Saab, Peugeot, Citroen, Rover, VW, Auto Union, Mercedes, Fiat, Morris and Datsun. From the start line in Nairobi crews faced a trial of 3100 miles over three days and four nights. Crossing the equator, the stages looped through Kenya, Uganda and Tanganyika rising from sea level to 7000 feet and back down again. 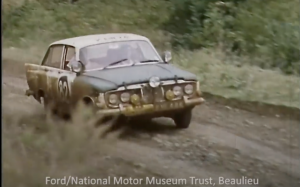 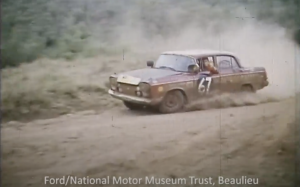 By the midway mark the entry field was slashed in half after torrential rain in the Great Rift valley reduced the route to a mudbath. Vehicles became bogged down and helpless, and in places blocked the road. When the mud dried clouds of red dust disguised jagged rocks that ripped away suspension and holed sumps. Random wildlife encounters added to the fray. European Champion, Eric Carlsson, and his fast everywhere Saab, suffered an unfortunate incident with an aardvark before succumbing to driveshaft failure.

The Ford Factory team disintegrated. Pat Moss and Peter Riley crashed out. Anne Hall’s car expired from a damaged sump. They were far from alone in their misery. Only one European team made it to the end. Brits Bill Bengry and Gordon Goby wrestled their mud encrusted Rover P5 home in seventh place. 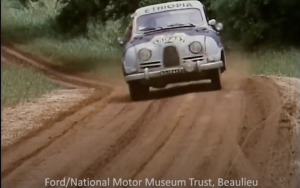 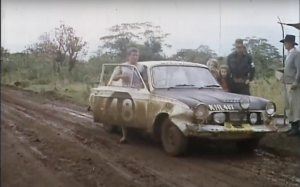 The winner was local man Nick Nowicki in a Peugeot 404, a car that would become a staple of African motoring life for three decades – Kenya would finally halt licence production in 1991. Of the seven cars that made it home, three were Peugeots. A local privateer Mercedes 220 and the Fiat 2300S of ‘Flying Sikh’ Joginder Singh rounded out the finishers, with the solitary Anglia of local Peter Hughes taking second place.They made it thanks to Nowicki and his co driver, who generously dug them out of a mud trap on one stage. 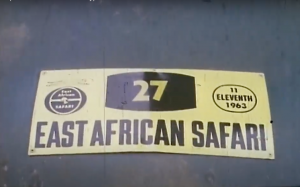 Even the prize giving ceremony was a damp squib. The silverware filled with rainwater in a cloudburst. The winner, Nick Nowicki, said it was the toughest Safari Rally ever. On the Safari, lightning would strike twice. 1968 would again see just seven finishers. Two of the Unsinkable Seven in ’68 were OG heroes from the shitshow of ’63, Nick Nowicki and Joginder Singh. Between them, these two drivers would take the winners laurels on the Safari five times.

Recently released on YouTube is the original Ford film of the event. Featuring an Oxford English narration, and a truly dire soundtrack, it’s an evocative window on a world where endurance rallying featured cars you could actually buy from your local garage. One where shirts and ties were de rigueur for non combatants, crash helmets were rarely seen, and the drivers were sustained not by sponsored tins of chemically enhanced bullocks, but rather by an endless supply of woodbines, and tea served in cups and saucers. 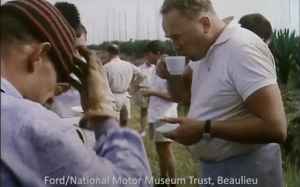