Ralph Bagnold is one of those Brits who quietly went about doing great things. He was a soldier, innovator, explorer, and feted amateur scientist. His odyssey of motor adventures melded the car to the desert in peace and war.

After three years of the trenches during World War One, the Army sent Bagnold to Cambridge. He studied at the exclusive Gonville and Caius College, gaining an MA in engineering. In 1926 he was posted to Cairo and developed a passion for the Middle East. The desolate wastes of the Libyan Desert fascinated him. Maps of the area were mostly blank.

With some like minded army chums Bagnold set about changing that. Finding that British cars were better suited to roads rather than sand, they purchased some Model T Fords, and struck out for a half forgotten oasis called Uweinat, learning through trial and error how to utilise a vehicle in blistering desert conditions. 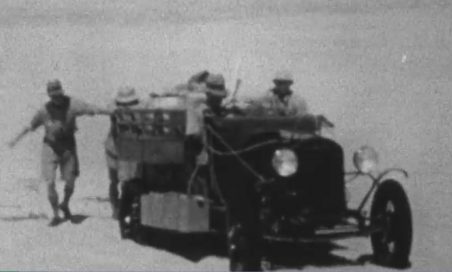 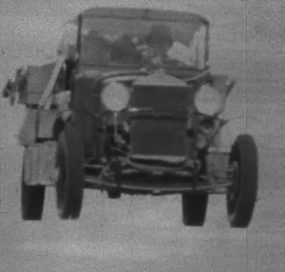 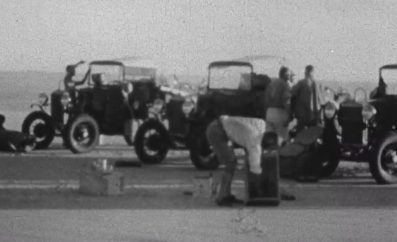 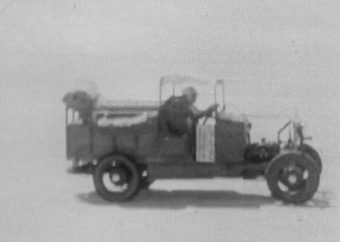 Navigation was key. A standard compass could provide inaccurate readings due to interference from the car or random iron deposits, so Bagnold developed the use of the Sun Compass, utilising the azimuth of the sun and monitoring speed and distance travelled, to navigate by dead reckoning. They backed up their readings with star shots taken by theodolite each night.

He discovered other things out in the vast sterility of the desert; a collection of Stone Age tools resting undisturbed amongst strands of tamarisk, a circle of upright stones three hundred miles from the nearest water, a solitary rock jutting out of an ocean of sand. Signs of life remained infrequent; reminders of death were a constant. The bleached bones of the desert’s victims were sometimes ghoulishly enlarged by mirage. Hot winds sucked the moisture from their skin. Fine sand thrown up by their cars, plastered their beards and trickled down their necks. Water with lime stifled their thirst, but did little to calm their range anxiety as the cars devoured more petrol than expected.

Bagnold was energised by the experience. A posting to the North West Frontier of India could not keep him away. In 1929 he purchased a new Ford truck chassis and running gear, building a light custom body to fulfil his requirements. With thirty days leave, he railed the lorry to Sibli, drove through the Bolan Pass to Quetta, and on to Persia, passing through Tehran and the wine country of the Caspian before climbing the snow covered mountain passes to Kermanshah. At Baghdad he stopped for the luxury of a hotel bath then pressed on through Damascus and Beirut to Haifa, where he crossed the Sinai to reach Cairo. This epic journey of four thousand miles was just to reach the start of his next expedition, to reconnoitre an area known as the Great Sand Sea, believed to be impenetrable to man and vehicle.

A formidable range of whaleback dunes reaching three hundred feet high, waited for them. They weaved through the maze until their path was blocked by another range. To turn back meant failure. “…Feeling like a small boy on a horse about to take his first big fence…” Bagnold launched his truck at it. “The lorry tipped violently backwards…” with no sense of his speed or any feeling in the steering, Bagnold felt the truck ascending the face of the dune as if in a lift.

Fascinated by how the ‘impassable’ sand had supported his vehicle, he discovered the surface grains were packed together, providing a fragile crust the vehicles could ride on, if applying suitable momentum. If the crust gave way they bogged down immediately. 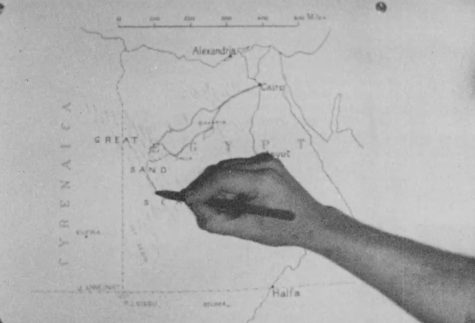 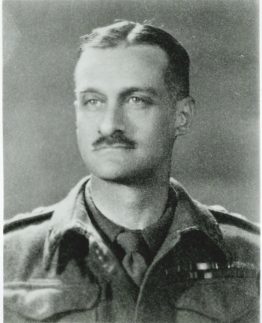 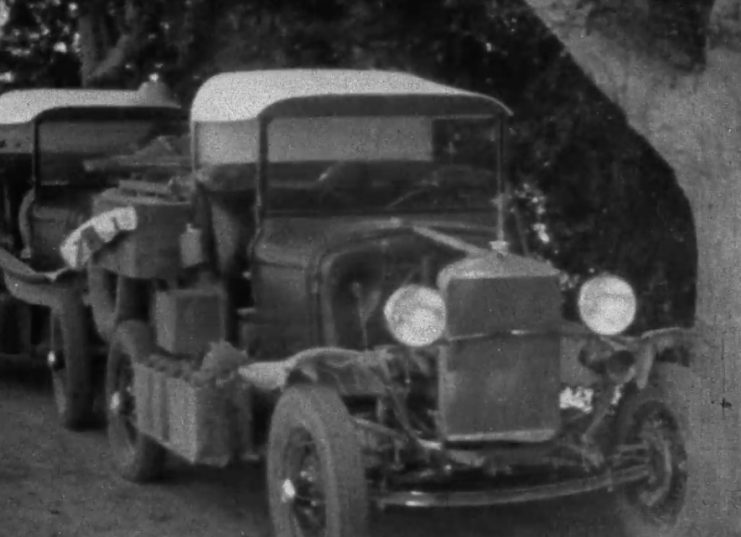 The following year he returned in suitably modified Model A Fords, conquering the Sand Sea and exploring beyond it, whilst finessing driving techniques we take for granted today. His group employed lowering tyre pressures to travel across soft sand. .They experimented with metal ‘sand channels’ to unbog their cars.They became experts in identifying dry quicksand. They noted how their spatial orientation was critically affected by the angle of the sun at different times of day. They perfected water and fuel logistics, desert navigation, and became expert ‘bush’ mechanics. Bagnold himself noted they had as explorers found little, but their new knowledge of operating vehicles in the desert had been their greatest discovery.

Posted to ‘Blighty’, the desert still called to him. Rogue grains of sand found in coat pockets, and the “hot varnish smell of a car standing in the sun” prompted a craving to return. In 1932 his new motor expedition saw him travel further into the unknown than ever before.

Bagnold would fill in the blanks on the map, ranging across the desert to Chad and southern Sudan, travelling six thousand miles and completing the first successful crossing of the Libyan Desert from east to west. He and his team were, as always, travelling unsupported, relying on their self taught skills and their trusty Fords, to survive in the void.

Bagnold left the Army in 1935, just as his sister, Edith, published horsey romp, ‘National Velvet’ Bagnold immersed himself in further study of the sands. His 1939 thesis, ‘The Physics of Blown Sand and Desert Dunes’, received scientific recognition. 1939 saw him back in khaki and destined for Kenya. Fate intervened when his troopship was damaged. Bagnold found himself in Cairo shortly before the Italians declared war on Britain. The two armies faced each other across the Libyan Desert.

Bagnold thought an expert who had travelled the length and breadth of that desert might come in handy. In true Blackadder style, the staff at HQ didn’t seem to think so. Ducking red tape and dullards, Bagnold pulled strings for a meeting with General Wavell. He suggested creating a skilled small force that could sneak across the Libyan sands and conduct a spot of ‘piracy’ behind Italian lines. Wavell liked the idea. Bagnold recruited his former desert explorers to rapidly train a group of independent minded, Kiwi troops. They stripped and modified a batch of army trucks, adding lightness, and machine guns. The Long Range Desert Group was officially in business.

In 1944 Bagnold was released from the Army.(National bloody Velvet was at the cinema) His thirst for desert adventure quenched, he turned his studies to the physics of water and quietly got on with doing more great things. NASA referenced his work to interpret wind and sand behaviour on Mars. In his seventies, he was invited to give a keynote speech to the space boffins on the subject.  They named a region of dunes on the red planet in his honour. His long distance journeys into uncharted desert wilderness, in Model T and Model A Fords, pushed the boundaries not just of man and machine, but also of science and geography. It puts Bagnold firmly on the map as our pioneering long range, Tally Ho hero. 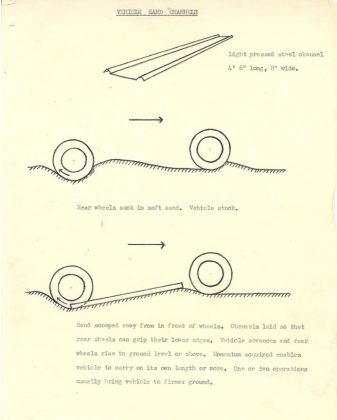 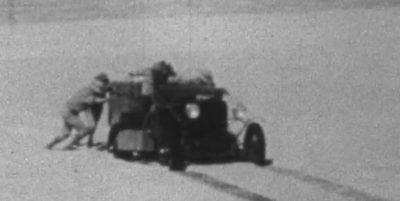 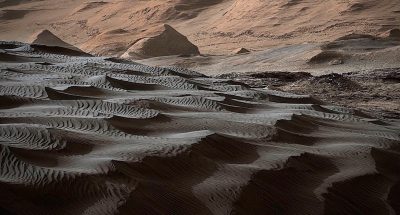 Book on Amazon ‘Libyan Sands -Travel in a Dead World’