If you happened to be driving about in 1990 and decided to test your car’s ability to knock down trees, then chances are you’d be left with two conclusions. Firstly, that a tree of any reasonable girth is an immovable object. And secondly, that ramming your face into your dashboard at high speed leaves you with an obscure facial arrangement that even the blindest of women would find repelling. We can only assume that the American John W. Hentrick had an eye for the fairer sex and so, in 1953 he applied for a patent on a devise that, in the event of an accident will prevent his nose and his forehead from becoming the same thing. By 1953, our German chums had spent eight years kicking their heels. To help pass the time, they too had developed an airbag system. Unfortunately, both the American and German systems used compressed air to inflate the bag, and had no effective way of triggering the inflation. This made them too slow to be of any use. The idea of an airbag fell cold until the mid 1960’s, when technology finally caught up. By 1967, American boffins had developed mechanical crash sensors which could automatically trigger airbags. Better still, they had worked out how to inflate an airbag faster than the time it takes for a driver to take a bite of his steering wheel.

This new system for inflation used a chemical reaction. If a rapid deceleration (known in the trade as ‘a crash’) triggered the mechanical crash sensor, it would ignite a chemical called Sodium Azide. This would kick start a chain reaction at around 300 degrees Celsius. This explosive chemical reaction creates Nitrogen gas which inflates the airbag in around 20 to 40 milliseconds. That’s less time than it takes to say ‘Fu..’. These days, mechanical crash sensors have been replaced by computers connected to a network of accelerometers, switches and sensors. Like tiny High Vis vested health and safety officers, they monitor your progress, ready to jump in if they feel your day has taken a turn for the worse. In as little as 0.025 of a second, around 35 litres of gas will have filled any one of an array of airbags that these digital dictators have concluded you may be heading towards. As the driver dives face first into this boiling, burning bag of gas, small flaps in the fabric bag open up to let the pressure out to give a soft landing. Other propellants are being used in modern systems, but deployment is still the same. If, in the early 90’s, you climbed from the foliage strewn wreckage of your car and gave the ambulance crew a big toothy grin, then chances are you’d just crashed your Merc S-class. Once again it was the moustachioed comedy dodgers who grasped technology by its fledgling roots and thrust it into the marketplace. As early as 1981 they offered airbags as optional equipment on their flag ship model. In 1987, Hermann’s love for Rules and Safety bore fruits again, in the form of the Porsche 944 Turbo. The first car to have both driver and passenger airbags as standard equipment. 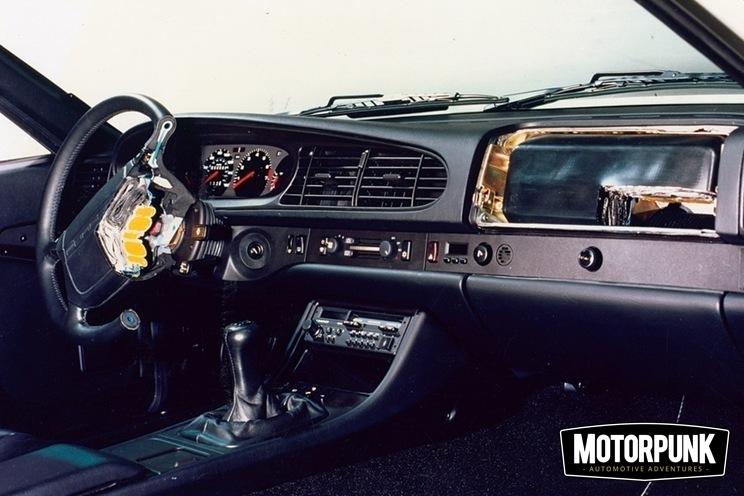 It wasn’t until 1992 that Ford introduced airbags into its sad, accountancy engineered MK5 Escort. By the mid 90’s, Rover, Fiat, Renault, Vauxhall, and even Peugeot had joined in. By the time the UK started stockpiling alcohol in anticipation of the Millennium celebrations, car manufacturers were hiding airbags in steering wheels and in the sides of seats, to cushion against the doors in a side impact. They can now be found under dash boards to protect your shins. Curtain airbags come down from above doors to protect window areas. Rear curtain airbags, centre console airbags, anti-submarining seat airbags, seatbelt airbags, and even pedestrian airbags are hidden all around a modern car. Airbags make a modern car safe, but they have one critical downside. Not the alleged injuries they cause. Those are mostly due to people not wearing seatbelts correctly. Not the potential burns from the process that ignites the airbag. We’re not talking about the risk to precious new-borns in front facing car seats, or expectant ladies getting a sudden bump in the bump. We refer you, good reader, to something far worse. In an accident, an airbag will retain the original order of your face. But on every journey you take where you don’t crash, you’ll have to stare at a hideous, swollen, plastic carbuncle of a steering wheel. In the name of safety we have lost the joy of wrapping our fingers around the delicate, tactile wooden rim of a Moto-Lita classic steering wheel and watching the sun reflect from its broad chrome spokes. To preserve this pleasure, we feel it is worth having a face that looks like it’s been drawn by Pablo Picasso.

Words, and that; Panties Hammersley