To get to the Moon you don’t just need to successfully get off the launch pad. You first need to get on the Launchpad. Hauling a rocket and its launch platform that weighs a combined 5200 odd metric tonnes and reaches 36 storeys off the ground, requires a choreographed operation conducted at a speed slower than a randy tortoise. To do that you need Hans and Franz, NASA’s heavy lift behemoths known officially as Crawler Transporters.

First used in 1967 for the Apollo 4 mission, they were at the time the largest self powered tracked vehicles on earth. Since then the Bagger 288 excavator has surpassed them. As impressive a beast as the Bagger is it can’t transport a Saturn V rocket, so we won’t dwell on it. 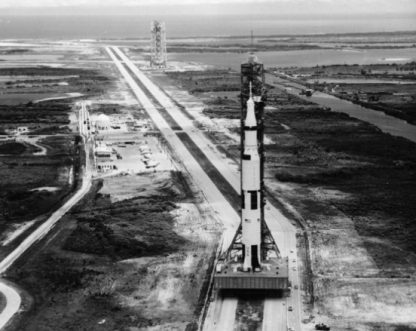 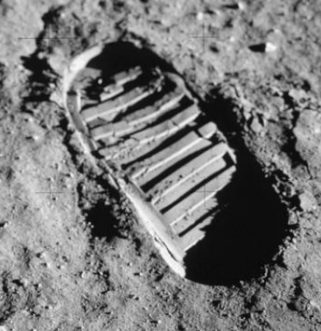 Initially NASA boffins looked at building a canal or rail track, but found more issues than answers so they settled on a road, a heavily reinforced road, sixty feet deep, and a vehicle the world had never seen the like of. The Crawler was designed to slide under a Saturn V and its launch platform, then lift up and cart the ensemble to the launch complex.

Carrying immense weight was only half the problem. The height of the load was another. The Crawler would need to make adjustments to keep the rocket, its umbilical tower and its mobile launch platform, perfectly perpendicular on its journey. It also had to spread the weight of that load evenly over its tracks. Once at the launch pad it would be required to offload its cargo within half an inch.

In 1964 the Marion Shovel Company of Ohio won the fourteen million dollar contract (about 120million today) to build the Crawlers. By the time they had finished each Crawler was 131 feet long and 114 feet wide with a curb weight of six million pounds. (2721 tonnes) It was powered by two V16 Alco diesel engines each producing 2750 horsepower. Two 1000hp generators provided power for the steering, lighting, etc. Rotating the tracks required sixteen traction motors, in turn powered by four 1341hp generators.

The tracks or treads, as you would expect, are quite something. There are eight of them (two per corner). Each tread has 57 ‘shoes’ or tread plates. Each of them is taller, wider and heavier than your average Florida citizen- hard to accept I know. For the record they are 7.5 feet long 1.5 feet wide and weigh in at 950KG (2100 pounds) 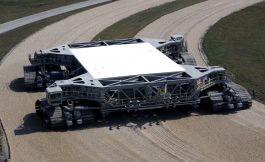 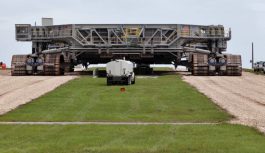 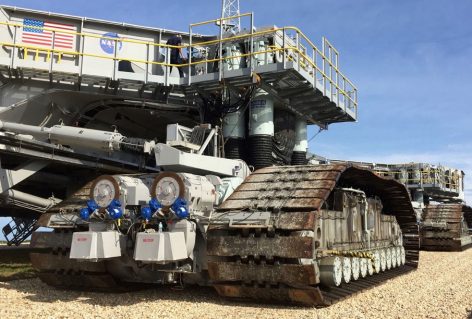 Of course, all these stats wouldn’t be any fun without the fuel figures. Loaded, the Crawler manages 32 feet per gallon. That’s a US gallon, not Imperial, so it could be worse. That works out to around 165gallons per mile. Say the Crawler is going to launch pad 39B (four miles away) – that’s 660 gallons before the return journey. In their lifespan the Crawlers have dribbled backwards and forwards over four thousand miles, so multiply that one- way trip by one thousand for a rough guide to lifetime diesel gluttony.

To keep its mega tonne, multi million dollar load balanced and upright, the Crawler uses laser alignment and its jacking, equalizing and levelling system (JEL) that maintains equilibrium across four load interfaces that are situated above each set of tracks. The JEL consists of sixteen hydraulic cylinders, four on each corner. They’re whoppers, with a two metre stroke length capable of adjusting the load for that 5 degree gradient. In total, the Crawler uses 2500 gallons of hydraulic fluid.

Once loaded, it takes six to eight hours to reach the launch complex on Merrit Island. A team of thirty personnel run the show. Half are on board monitoring the systems whilst half act as observers walking alongside. Driver cabs are situated at either end of the Transporter, because this lump doesn’t turn around. There are two engine rooms, a central control room, fridge, microwave and a portaloo on board. 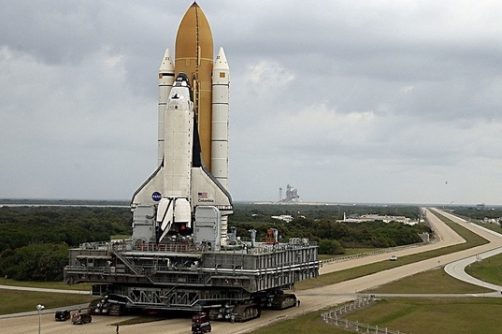 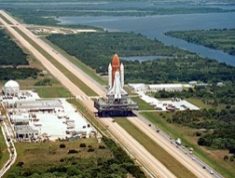 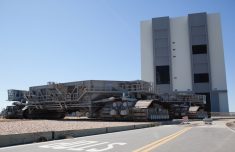 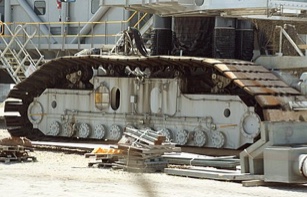 The crew swap over driving duties every forty five minutes to prevent fatigue setting in. As the Crawler edges towards its destination at around 0.8 to 1mph, (flat out is 2mph) it rides on top of a crust of Alabama river rock that sits atop the reinforced road. The rock was chosen for its availability, and mineral hardness (2 points less than a diamond). It’s crush resistant, reducing spark risks: Sparks and rocket fuel- nuff said.

The Crawler Transporters have carried every big project NASA has lobbed into space since the early Apollo missions. Crawler Transporter One also helps out Elon Musk and his SpaceX programme. Crawler Transporter Two, CT-2 in NASA speak, has been upgraded for the new SLS rocket, part of project Artemis. Artemis will see us return to the Moon in the first step to Mars. It requires the transporter to lug a fifty percent increased load of up to 18million pounds. That’s about the same as twenty fully loaded Boeing 777’s.

NASA envisions the transporters will continue in service for another fifty years. It’s funny to think that while most of us will have slipped our earthly ties, the Crawler Transporters, by then over a century old, will still be plodding back and forth, at one mph to the Moon. 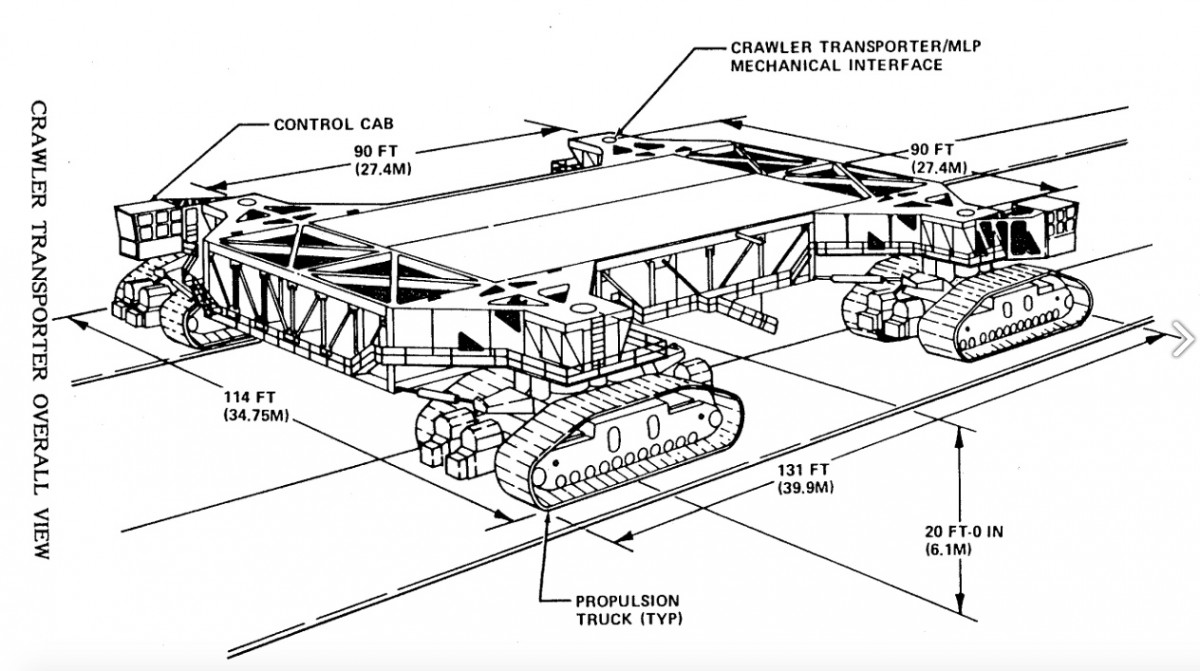