OK, perhaps the title of this feature is a little unkind to the nuclear-powered SLS supplied by Mercedes for safety car duties nowadays, especially when it sounds better than the F1 cars it is employed to herd. Bernie has made it all a bit too corporate for our liking though so we look back at some of the more unusual cars that have helped (and sometimes hindered) in the name of safety. 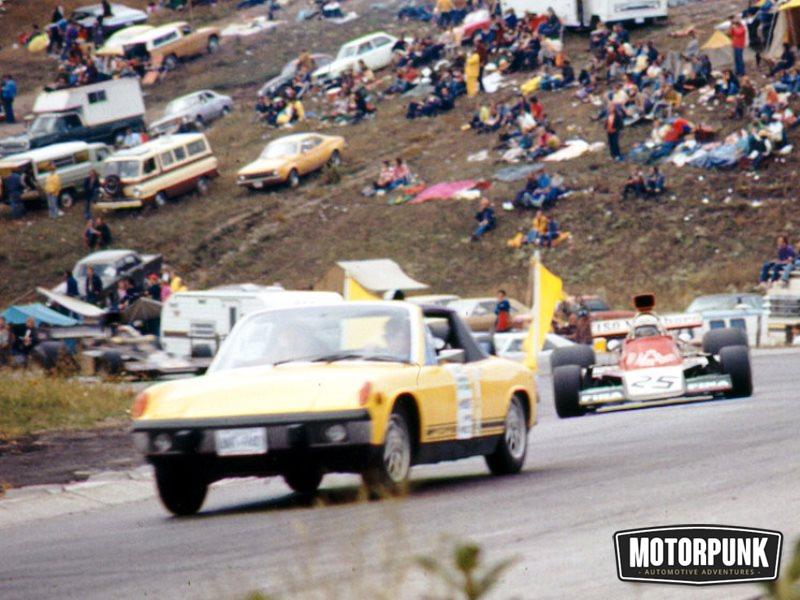 Anoraks will argue which was the first F1 safety car but in our book it’s a Porsche 914 employed at the Canadian Grand Prix in 1973. Driven by F1 reject Eppie Wietzes this one produced just 110BHP, roughly a quarter of the McLaren that won the race and it’s appearance caused confusion in the running order. Porsche took the opportunity of some great product placement although surely the 911 would have been more appropriate than a semi-Volkswagen convertible. In yellow. 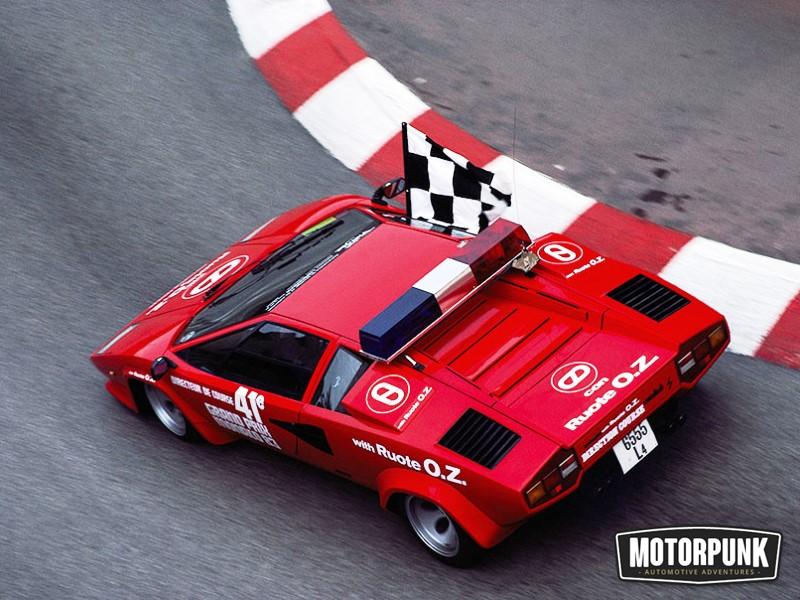 Until AMG got the gig on a permanent basis tracks would each employ their own safety car. Monaco doesn’t do modesty and in the early ‘80s Europe’s most glamorous tax haven used a red Lamborghini Countach. Never before, or since, has a Lambo been driven at such a decent lick around the principality’s crowed streets. I suspect the Countach safety car did more laps overall than the Ligier and Larrousse backmarkers later powered by the oil-spewing Lamborghini F1 engine. This is as cool as safety cars get.

This platform was also used for the Alfa GTV 916 and the Alfa 155. OK, it they’re not the greatest handling cars ever but they’re cool nonetheless. The Tempra was the ugliest incarnation of this platform and the ’83 Brazil GP car was shoved together in a Brazilian factory. That’s a factory in Brazil, not factory of shaved ladyparts, just so you understand. The Tempra estate has a split crotch, sorry, split tailgate and… sorry, I’ve lost my thread now. 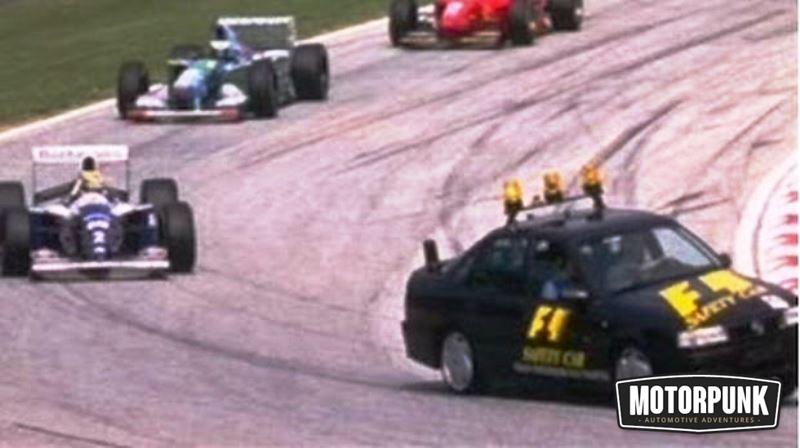 Conspiracy theory freaks will claim that this is the car that killed Senna. It was so ruddy slow that by the time it had dragged itself out of the way everyone’s tyres had gone stone cold. The loonys say “no grip, Tamburello, blah, steering column, F1’s greatest driver, Clarkson was right, blah”. I have no idea why a dog slow GM saloon car was used in San Marino, it’s the uncoolest safety car ever. Even the space lizards know that. 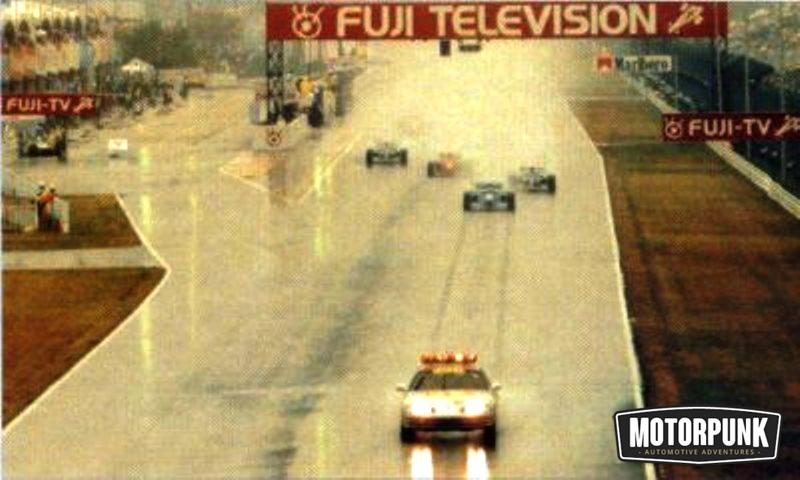 I briefly worked in a factory full of Indians and as they thought I spoke better English than they did I was once asked to call about a car for sale in the paper. A “Honda Perloood”. I corrected my Indian-subcontinental chum on the pronunciation of Honda’s understeery wedge, called the number and enquired about the Prelude. “Aaah”, said the seller “you mean the Perloood?!” My friend now works in a call centre and no-one remembers Japan’s ’94 GP safety car, however you pronounce it. 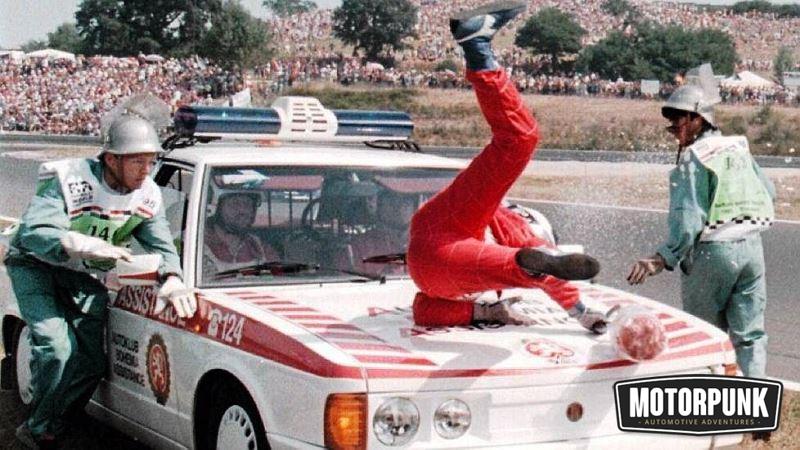 Tatra is a fascinating marquee that once rivaled VW. The 613 was about the end of the road for them as a car manufacturer despite (or perhaps because of) the 200BHP air-cooled V8 in the boot. This car caused perhaps the funniest moment in racing history when it inadvertently ran over Japanese driver Taki Inoue at the Hungarian Grand Prix. If you’ve not seen it before it’s online here and is what YouTube was invented for. 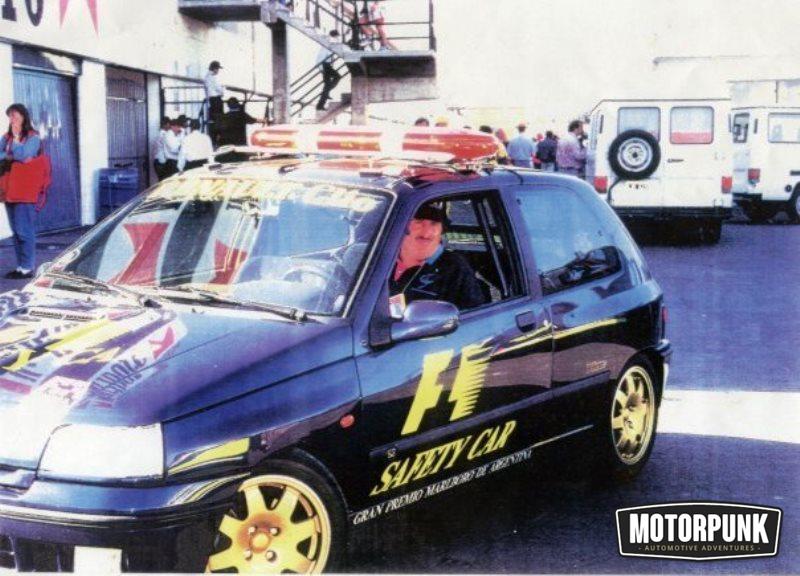 As Damon’s Renault-powered Williams wrapped up a win Renault were making the most of the association by having a Clio Williams as a safety car. The Willy was called into action when my gym buddy Luca Badoer’s Forti was brutally rammed out of the Argentine Grand Prix by Pedro Diniz whose Ligier later burst into flames, prompting the memorable headline in the Sun newspaper “Diniz in the oven”.

Safety at racing is a pre-requisite yet we can’t help but feel F1 would be enlivened with a different safety car at each race. As Marshalls sweep up after Maldonado fans should be treated to a safety car from one of the host nation’s manufacturers. It would add another variable and a bit of spice. So – I propose sticking with the AMG for Germany but let’s have a Lotus at Silverstone, a Mustang in Austin and Taki Inoue driving whatever it is they make in Belgium. It’s no worse an idea than the Azerbaijan GP, is it, Bernie?