MOTORPUNK LEARNS TO FLY A DE HAVILLAND TIGER MOTH – THE LIGHTWEIGHT TWO-SEATER YOU CAN PILOT AT FOURTEEN.

We chaps at MotorPunk oft pride ourselves for our off-beat solutions to the everyday problems that face today’s modern gentlemen. For example, over the last three months we have tackled the prickly issue of European integration (by abolishing Belgium), traffic congestion and drink driving (through the cunning deployment of Monkey Bikes) and the sartorial decline of F1 drivers (after petitioning the FIA on the merits of corduroy). However, this month we genuinely think we have might have struck gold, especially for our younger readers. Are you sitting comfortably? Then I’ll begin:

Learning to drive is, for the average British teenager, a thoroughly unpleasant experience. Most will have spent a dozen or so hours being patronised by a driving instructor who’s had his passion for motoring surgically removed by the Driving Standards Agency. It’s also widely known that the cost of driving lessons are kept artificially high to fund your instructor’s Ketamine addiction; this is a necessary form of self-medication required to teach today’s generation of over-confident young men brought up on Xbox driving games (settings: no damage, braking assists, rewind available). 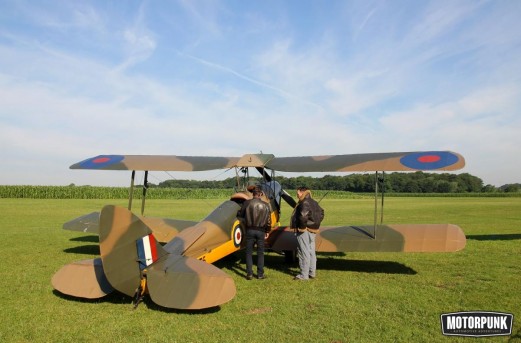 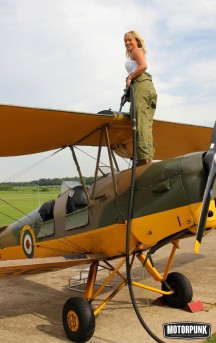 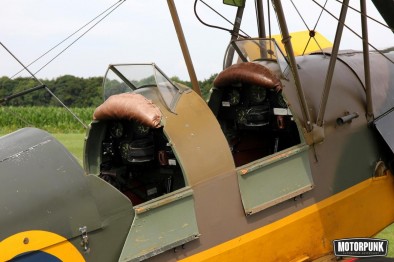 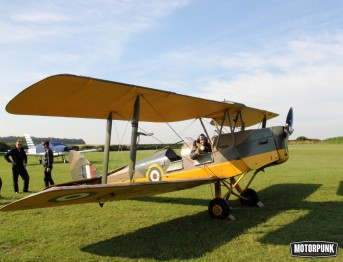 The Sixth Form common room is a bear pit for the fragile egos of wannabee-wheelmen. There’s the inevitability that some self-congratulatory oik will have passed months before you will. It won’t matter to young ladies in the passenger seat that he’s failing his C&G in Applied Thuggery – he’s got the keys to his Mum’s Yaris and the world is now his oyster*.

But, let’s think outside the box for a bit: what if you had your own biplane? It’s a little known fact that you can actually learn to fly from the age of 14. On average you’ll be solo in far fewer lessons than it takes to drive, and when you hit your sixteenth birthday you could take to the skies in your own vintage aircraft. Then, just like your wartime contemporaries, you’d definitely get the pick of the mess’s young gals – except they won’t reek of Capstan Navy Cut or have legs that taste of Bisto. It’d also be a great excuse to don a Moto- Lita flying jacket, talk like a toff and grow spectacular moustaches – surely that’s every 16 year old’s dream? So how hard would it be to take the controls of a De Havilland Tiger Moth, the very same trainer that our WWII fly-boys gained their pilot’s wings on? To find out we paid a visit to our old pals at Blue Eye Aviation at Netherthorpe Airfield in the rolling pastures of South Yorkshire. Pulling up in the topless MX-5 one gorgeous August morning we were met by Will and Claire who quickly spotted my military bearing**; I was ushered away to the briefing room to begin my first flying lesson, while some drab fatigues were tossed at Rich who was directed to the ground crew’s bell tent. My co-editor might dance like a drunken Douglas Bader but he isn’t really what I’d call “officer material.” 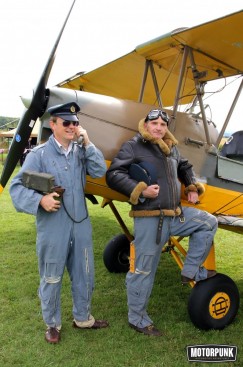 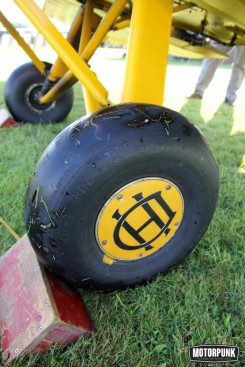 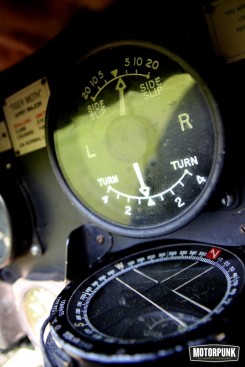 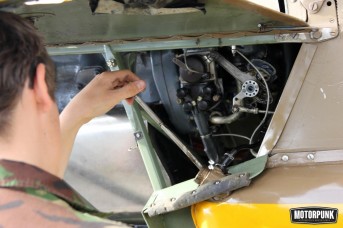 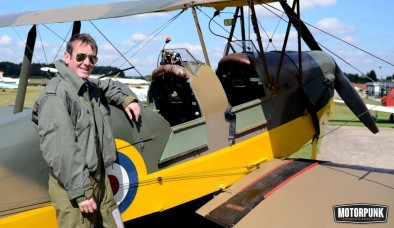 Pilot Will stood with Tiger

Flying instructors Will ‘Toad’ Flanagan and his father Dick jointly own Blue Eye’s 1940 Tiger Moth two-seater trainer. Along with Will’s fiancée Claire, they have been faithfully recreating the atmosphere of a WWII flying school and giving folks a rare opportunity to experience first-hand what it must have been like for those nervous young trainee Spitfire pilots taking to the air for the very first time. After a classroom safety briefing, and the basic physics of flight had been explained, period flying outfits were issued from the stores and we went outside to help the lower ranks (which included one scowling MotorPunk editor) pull the Tiger from its hanger. While I generally object to manual labour this wasn’t an arduous task; at just over 800kg this beautifully preserved twin-cockpit biplane weighs less than a Lotus Elise. As a “trainee pilot” I helped with a few basic checks for fuel contamination, aileron and rudder operation, before priming the oil pump on the 6.1-litre Gipsy Major engine.

Surprisingly quickly you find yourself strapped into the front cockpit looking nose-up through a small windscreen surrounded by wood, fabric and lengths of exposed dual control cables. Fuel pump toggles are flicked, props are spun and chocks are removed as the Tiger Moth bursts into life with an agricultural four-pot burble to start the taxi to the far side of Europe’s shortest grass runway. Once lined up the throttles were opened for a short blast up the strip and a gentle climb into the great blue yonder to around 1,000 feet.

Everything happens quite slowly in the Tiger Moth; having ailerons on only its bottom wing it has a slow rate of roll for a biplane, and its big “parachute” wings make it quite forgiving to the clumsy inputs of the novice airman. The Tiger’s stall and spin characteristics are benign; however, it does have some adverse yaw, and therefore requires rudder input during turns. I could tell you that as a naturally gifted pilot I worked all this out for myself in my half hour introductory lesson, but, the truth is, most of this paragraph is nicked from Wikipedia … I don’t actually know what “yaw” is!

Once we were flying nice and level Will chatted over the headsets and reminded me of the basic controls before letting me take the stick. With 150bhp whizzing through the propeller the Tiger has a kind of permanent torque steer; combined with the cross winds and pockets of turbulence, the Tiger required constant little inputs to keep it barreling along, straight and true. 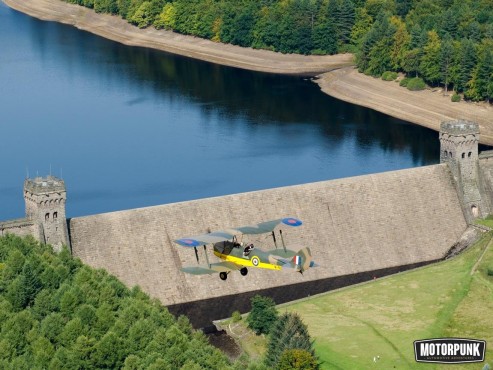 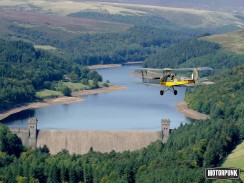 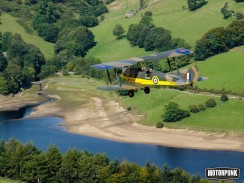 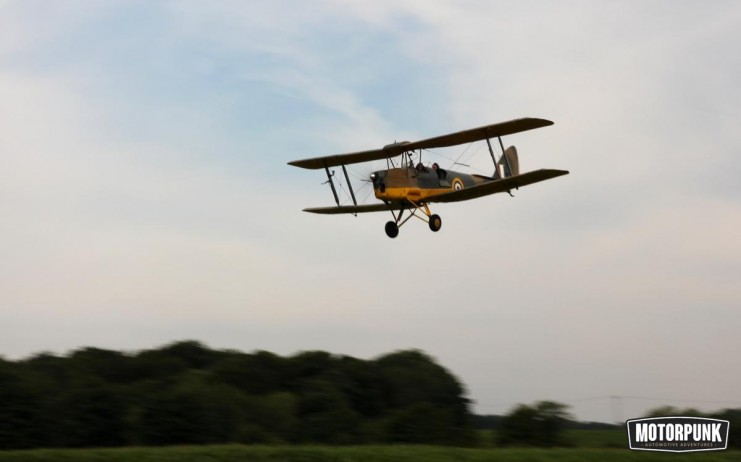 As we passed over the glinting lakes of Thorpe Salvin Hall, instructor Will barked over the radio that my new orders were to strafe some Jerry snipers camped out in a nearby Church steeple. Leaning over the cockpit side to get a better view means you’re suddenly reminded how vulnerable those young flying officers of WWI must have felt in their Sopwith Camels with only cloth, timber and fuel tanks for protection. I was having a hard job just spotting the Church; without a skyline for contrast it’s really hard to identify specific buildings, plus there’s that ruddy great engine and prop directly ahead. Imagine trying to do all this while the enemy fired at your underparts from below? If I didn’t spot that bloody Church I’d soon be flying over the arse-end of Worksop where I could be dodging pot shots from booze-addled gunmen for real. And then I spotted it. Pushing the Tiger into a shallow dive the steeple grew bigger in the tiny windshield. Will made a first- rate impression of a Vickers machine gun raining hot lead on the holed-up Boche before we pulled up, banked to the right and set a course back to base for hot cocoa, a medal from the top brass and some rumpy-pumpy with a buxom Land Girl … I imagined.

At 500ft, the minimum flying height, the patchwork quilt of r ural England looks fabulous; “What a brilliant way to commute,” I pondered. Even after hundreds of hours at the controls Will still gets a buzz from flying the Tiger Moth; “The provenance, smell and feel of an open cockpit – there’s nothing like feeling the wind blowing through your hair – it’s real flying.”

So, who needs a sports car when you can fly solo in a 153mph Tiger Moth in fewer lessons (Will holds the record at only three hours before going solo) at just 16 years old? There’s no congestion, no psychopathic van drivers cutting you up and it’ll certainly turn more heads than the tatty Japanese ragtop we’d arrived in.

Well, unsurprisingly, there’s a Clarksonian twist to this story: although 8,000 Tiger Moths were knocked up over its twenty year production run, only 150 survivors are thought be in private hands across the UK. After the war the RAF flogged off its surplus trainers for just £60 each (£100 for two if you haggled), but today, an original example, with an interesting service record like Will’s, can fetch over £70,000. And then there are the running costs. Blue Eye Aviation, which offers flying experiences to the general public, is required to overhaul its Gipsy Major powerplant every 1,000 flying hours (roughly every three years) costing an eye-watering £40,000 a pop. 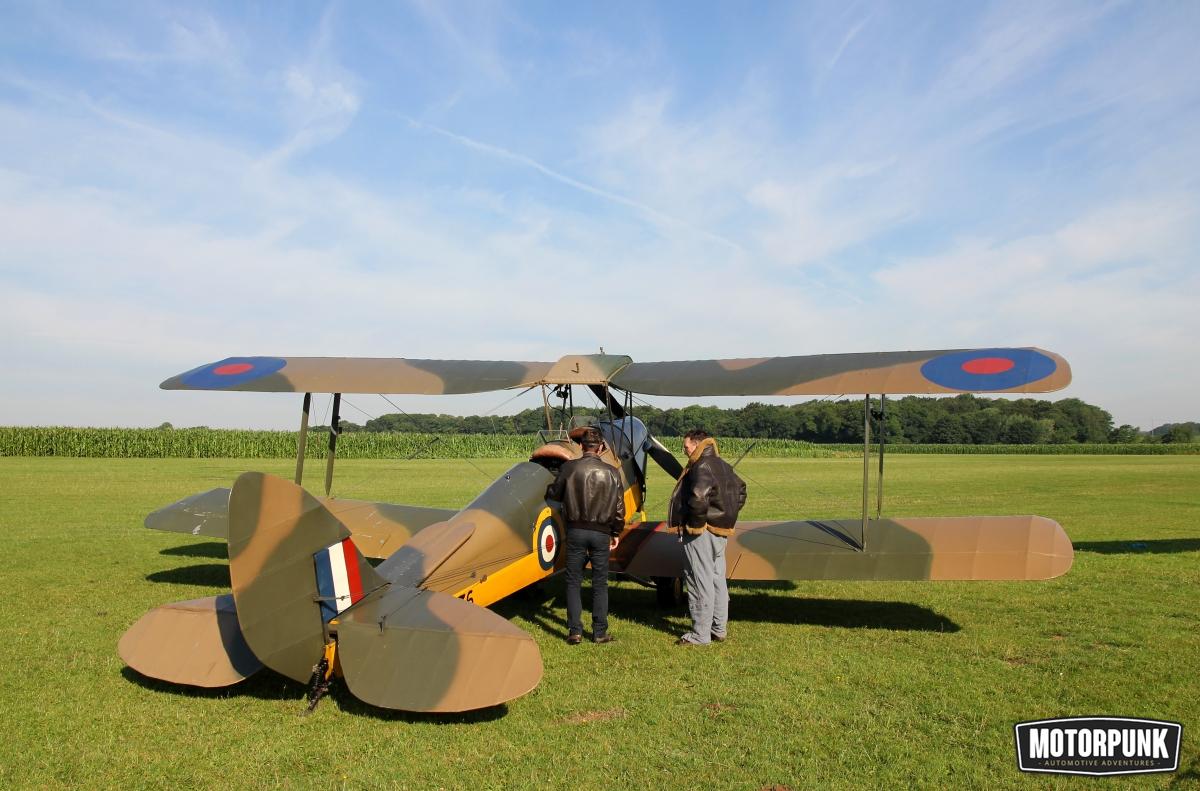 However, if you’re a well-heeled, left-field, tally-ho sort of chap who wants a vintage open-topped plaything, then we think we may just have found the perfect alternative to that concours Bentley Blower or DB6 convertible. As gentlemen of more modest means we’ll be grounded with the hoi polloi and our menagerie of drop-top jalopies. I’d love my own Tiger Moth; as I explained to my batman Duisberg on the long drive home, machine-gunning an imaginary Wehrmacht officer from the passenger seat of a rusty Mazda just wasn’t the same thing at all.

*I think you can see that there are some unresolved schoolboy issues here. While Steve Ford may have whisked Penny Baxter away in his Escort 1300 Sport, right from under my nose, back in 1989, I recently heard that he only leases his Citroën Berlingo and has been caught fiddling his disability benefits. So I guess, as fellow pilot Noel Edmonds would believe, that’s cosmic ordering in action.

** Something I’d consciously cultivated as an NCO, and occasional lead bugler, for the 22nd Leicestershire Boys Brigade.

Want to Learn to Fly a Bi-Plane? Dambuster Run Experience costs £425.00 Including Certificate, Photograph & Video Footage of your flight on DVD. Visit www.blueeyeaviation.co.uk for more information