I’ve got you, now, haven’t I? The very mention of Kelly Brook is often enough to make most chaps have a sneaky peak at what they suspect might be a borderline NSFW sort of story. So what’s the link between her and hot Vauxhalls? I needed something spectacularly saucy to offset the utter tedium that most Vauxhall features offer and worried you wouldn’t be here without it. Kelly is clickbait and now I’ve got you. Bear with me now, GM have a similar problem. They must know how dull most mainstream Vauxhalls are for they’ve slapped a Griffin on a number of other people’s hot cars over the years in an attempt to add some appeal to their line up. So, sorry about the bimbo, let’s meet six hot Vauxhalls that aren’t;

Calibre. Not Calibra. The –e is something special based on the MK2 Cavalier, whereas the –a is a MK3 based coupe that motoring writers cannot describe without mentioning drag co-efficient. So, let’s look at the lairy ‘80s one. I once went all the way to Birmingham in a mate’s oft-stolen Belmont just to see a Cavalier Calibre in a showroom. It was a limited edition run of the 130BHP MK2 Cavalier SRi, 500 made, all in carmine red with an OTT bodykit and that font down the doors. No performance mods (the crap chassis couldn’t handle any more horses anyway) but the styling = ! It’s a bit barry now but back then this was positively exotic to a lad from Leicestershire. This wasn’t all Vauxhalls handiwork, though, despite the badges the work wasn’t done on the line at Luton, but by Tickford with Irsmcher bits.

There really is very little to fault with the VX220. Launched just before it’s sibling the S2 Lotus Elise the VX looks like a junior supercar even today. GM’s insistence on having front and rear wheels of the same diameter might add to the aesthetics but it detracts a little from the handling. The paint can blister a bit and the ABS is intrusive. The turbo is lethally quick. This is nit picking. It’s a firm favourite in the MotorPunk office (Dr Octane having owned two) but even he insists on calling it a Lotus type 116, for the folks at Hethel created and built the thing, not Vauxhall. Try finding one that still has it’s Vauxhall badges fitted. Some even have Lotus ones.

I am quite old. I remember the Royale as being almost the same but way cheaper (back in the day) than it’s cool Opel brother, the Monza. But the Opel badged car seemed sportier, sharper, like a brawny Manta. It was the fastest car Opel had ever built. No-one wanted the Royale and so they were cheap for banger buyers like me. Both the Royale and Monza were built in Germany with the same inline 6 and RWD but seemingly cars with the griffin all had velour and autoboxes whereas the Opel had recaros and a bit of Teutonic chunk about them. I never understood the Vauxhall version back then. Now, I’d love one in gold with a brown interior and those little five spoke alloys. 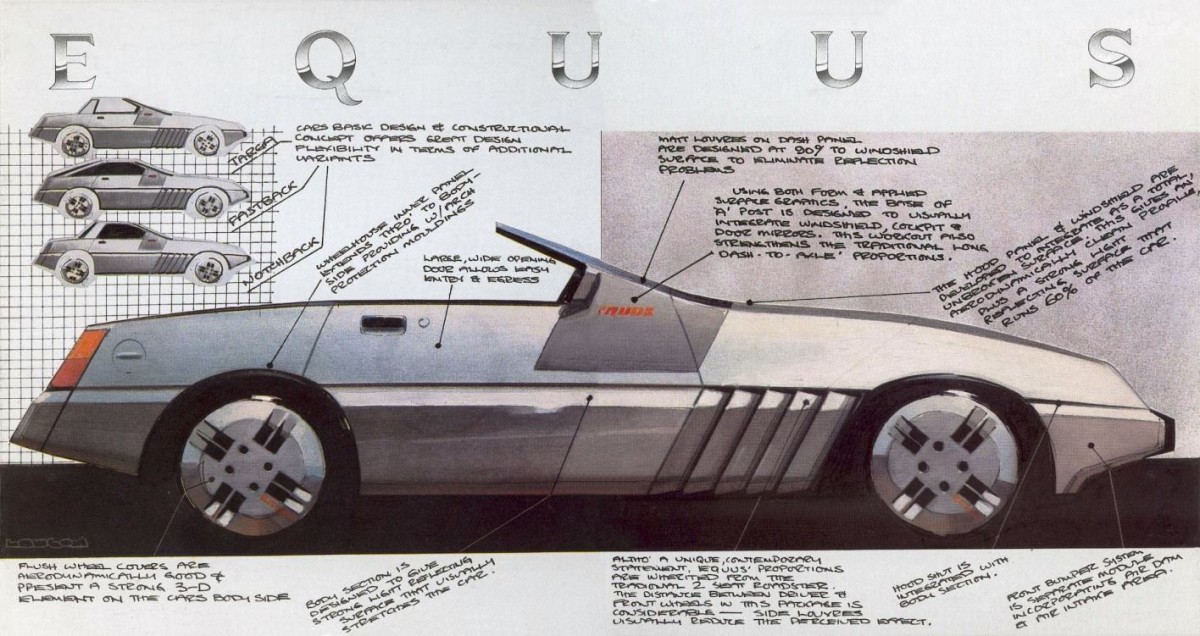 The Equus looks interesting now and back in 1978 it was other-worldly cool. It’s as far from the Vauxhall’s mainstream models as you can imagine but like many concept cars the Equus sadly never made production. Despite having a large dollop of Vauxhall Magnum DNA this is another example of the Vauxhall badge sitting on someone else’s work. The Vauxhall Equus came from Robert Jankel’s Panther cars company, better known for creating the visually repulsive Lima, on which the wonderfully wedgey Equus was based. After this experiment GM took all design work back in house for a while and gave us the MK2 Cavalier instead. All their own work. I had two. They were dull.

Walsall. The birthplace of GM’s Australian outpost’s founder, Mr Holden. Not very glamorous, but then Holdens aren’t about glamour, they’re about grunt. The third generation of Holden’s Monaro had a hefty 5.7 litre V8 and in ended up back in blighty wearing a Vauxhall badge. These Aussie built bruisers aren’t the best undersealed against the UKs weather and the exterior is a bit fat and functional, but these are hugely underrated muscle cars and we’d bloody love one in the lock-up. Badge snobbery hurt sales and the Holden model morphed into the VXR8 before Vauxhall reverted to  type. Today, popular Monaro mods include fitting a supercharger for an hilarious 500BHP and, predictably, badge deletion.

Another Vauxhall Opel collaboration. I say collaboration, that implies meetings and paperwork and stuff. What probably happened was GM stuck some Vauxhall badges on an Opel Commodore C to see if someone in Britain would buy it. A ten minute job, max, and on that basis the Viceroy shouldn’t really be worth mentioning. I’ve never even seen one. But in ‘81 Opel knocked up a one-off estate version, called it the Vauxhall Viceroy estate, and gave it to the Queen to ferry her Corgis about in. There’s no pic of this, so imagine the Opel above with a griffin on it. Apparently this one-off “Vauxhall” is still on the road somewhere. I imagine the Velour interior is now piss-whiffy and matted with hair (off the Corgis, not Phil the Greek).