As I write this, with spring sprung, daffodils trumpeting the sunshine and owners pulling their classic and sports cars out of winter storage it doesn’t seem like a big deal; Driving a Caterham. And it’s not. In these conditions there’s little better than our favourite hand-built car on a warm B road. But they’re not particularly cheap, these things, and ownership to us makes more sense when they can be relied upon all year round. Not a second car. Just THE car. Snow, sleet or sun. Can it be done?

The walk from Three Bridges train station to Caterham HQ is usually done briskly. The excited quickening of pace as the prospect of collecting a car gets closer. And, frankly, it’s good to stretch the legs a bit as the drive home is in a motorised cocoon. It’s winter, it’s raining, and I’ll be roof up the whole way. My theory was that with the joys of global warming, better tyre tech and improvements in design the Caterham could be used all year round. It makes purchase that bit easier to justify. We know they work beautifully in summer, you’ve seen the results here, here and here, for example. But winter? Caterham had kindly left the roof up my long-termer when I got there. The process of getting in these things is a faff. Opening the door is a faff. It is secured with a press stud inside the door, so to open it you have to slide your hand through the slit where door meets roof. When you’ve done it once, you know where to grope. Actually, when you’ve done it once you don’t bother ‘locking’ it again anyway. What’s the point? 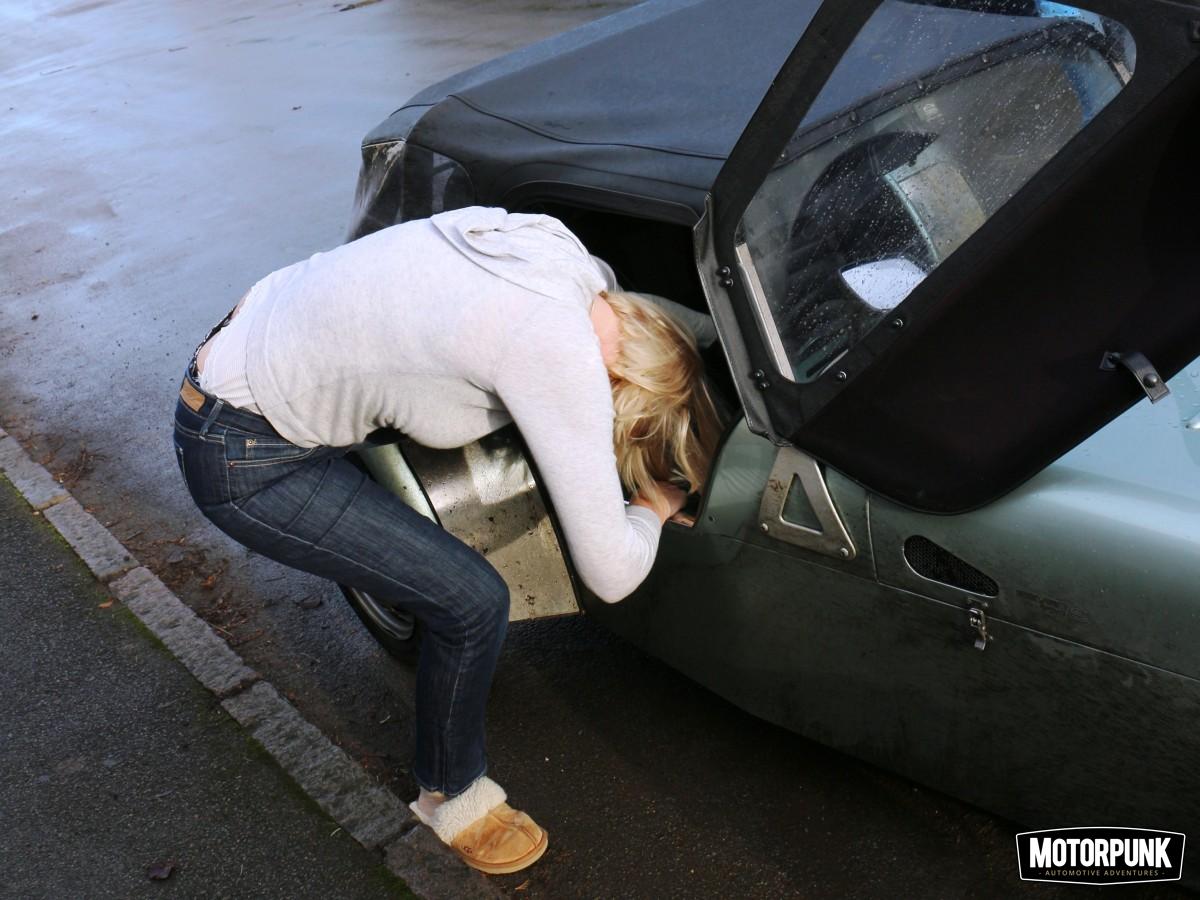 Left leg in, bend double, drop arse on seat, reverse your body, shoulder and head in, then use your arm to fold your right leg in. That’s how to get in. Picture (above) shows how not to do it (hello Diane, if you’re reading). Closing the door means reaching out where it’s folded open against the bonnet. No problem with long arms. Then secure the door with two press studs. One sits at elbow level. This tiny part poked me raw during ownership. The door needs sealing. That means folding it under the roof frame flaps of the vinyl roof. I’ve never managed to get this right. Where the top of the windscreen meets door meets roof there is a gap. It’s the same spot where water sometimes makes entry in an early Elise. On the Caterham you can see daylight thought it. No matter, we’re here for the ride. Here, have a happy selfie; 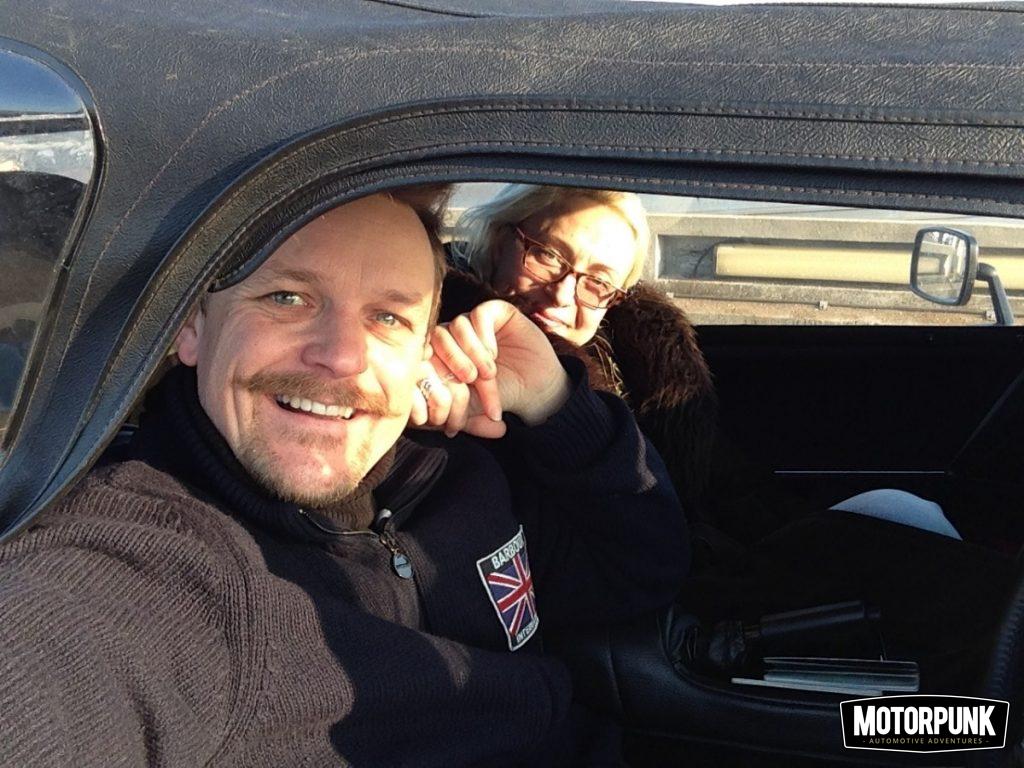 There is a heater. By your left knee there’s a sort of choke-cable mechanism (remember those?) to pull for a bit of heat. The ignition is under the dash and the immobiliser fob needs a good waggle to wake up the electronics nearby. Wipers are tiddly but work fine. Lights are crap. Slung so low the bluff shape picks up all the winter weather and headlamps need a good wipe before every journey. The full beam light on the dash is a blinding blue and seems to emit more light than the bulbs up front. Driving this thing in the dark, in rotten weather, makes you drive imagining that one-one has seen you – and everything needs that little bit more forward planning as a result. It’s cold. I drove with trousers tucked in socks (apologies for the pic), as an evil draught gets in somewhere I couldn’t find. But it works. A blast of refreshing air can be had by pushing the bottom half of the scalloped door flap open with your elbow when driving. I did lots of driving and the car got thoroughly shat up. 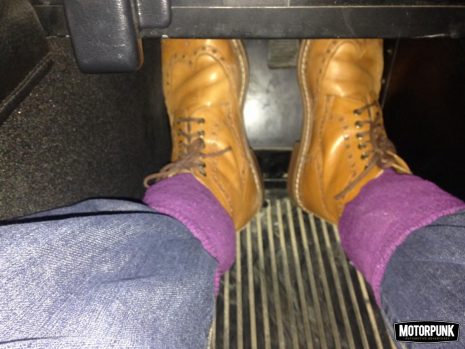 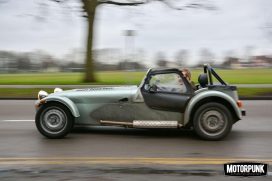 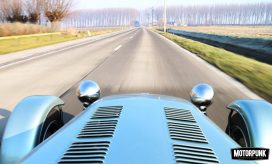 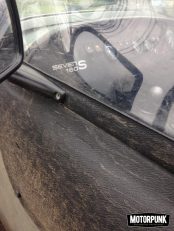 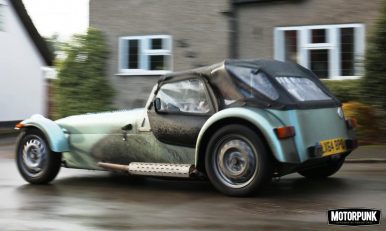 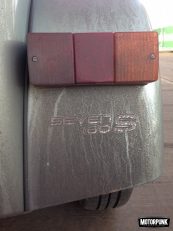 The car lived outdoors. I had garage space but wanted to see what this was like on a winters morning. The heated screen is ace. The cabin is so small it warms up quickly. The vinyl roof goes very stiff and, frankly, is a complete bastard to put on or off when temperatures are around the frosty mark, it’s so stiff there’s not enough give to stretch to pull the thing over the roof bars and press-stud (more press studs) into place. Grip improved significantly when the tyres had  warmed up, as did turn in. If  that makes me sound like an F1 driver then it’s because his little car makes you feel like one. Even on mundane trips from home in the East Midlands to the airport, or to Hampshire, the office in West London and elsewhere. I only used this car the whole time. One trip to the tip in the family Galaxy was three in the Caterham. Ferrying (delighted) kids, visiting (bemused) parents and all the regular trips you do in your everyday car – I did in the 160. We went abroad a bit, too. 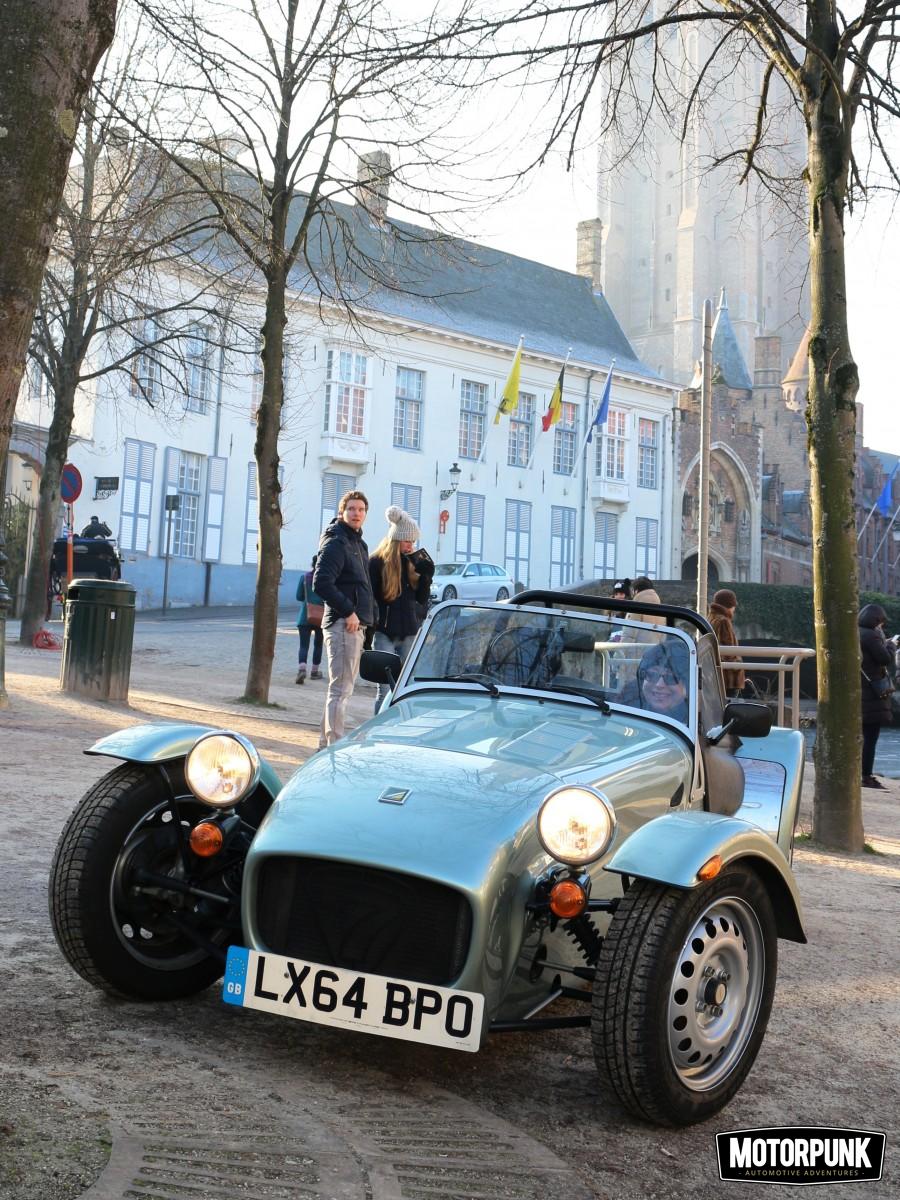 UK-Bruges, roof off. I don’t know what the chill factor was but the ambient temperature was never above freezing. Bruges’ famous canals were frozen when we arrived, wrapped like amateur explorers, but smiling because the car handled everything January could chuck at it. Tourists tore their gaze away from lace shops, beer shops and pretty bridges to stop us and ask questions. Often the same (from non-petrol heads); “is it old?, “how fast is it?” and lots of “can we take a picture?” The answers are no, just enough and of course! Car fans would look at the tyres and ask about performance from the 660cc turbo’d three banger. In short; It needs thrashing everywhere but never grows tiresome. Stats and prices are online here, if you’re wondering. 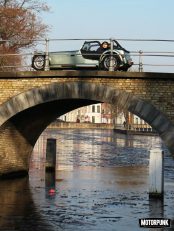 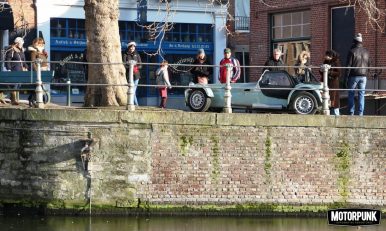 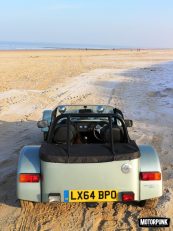 The last big trip tested me and the car. It was deep winter. Breakfast in Belgium, lunch on a beach in Holland (it makes a great beach buggy on those tall tyres), coffee in France and a cuppa at home in England at tea-time. One trip, in one day. Everything worked, nothing broke and it used hardly any fuel. Yes, it was a bit noisy and you have to work hard to drive fast on slippy roads but it’s so modestly powered and ‘catchable’ that even a lump-footed oaf like me was still smiling after 500 hard driven miles. That tiny gap in the door/roof/windscreen area very occasionally let in a tiny raindrop, catching me on the cheek. A miniature droplet, fallen from a thousand feet above, swirled by air and in through the tiniest of holes in this moving missile, kissing my face. This isn’t a shortcoming, it’s a blessing, this car makes you connected with everything in the best possible way – and happy like little else. Garaging it might make mornings a little easier, mind. Getting in and out means accidentally wiping your arse on the rear mudguard which is inevitably filthy, it’s unavoidable, and I really should clean my cars more often anyway. But these are little quibbles which only committed, long-term use will ever show up. I gave the car back after a damp and horrible winter with no qualms about year-round ownership. 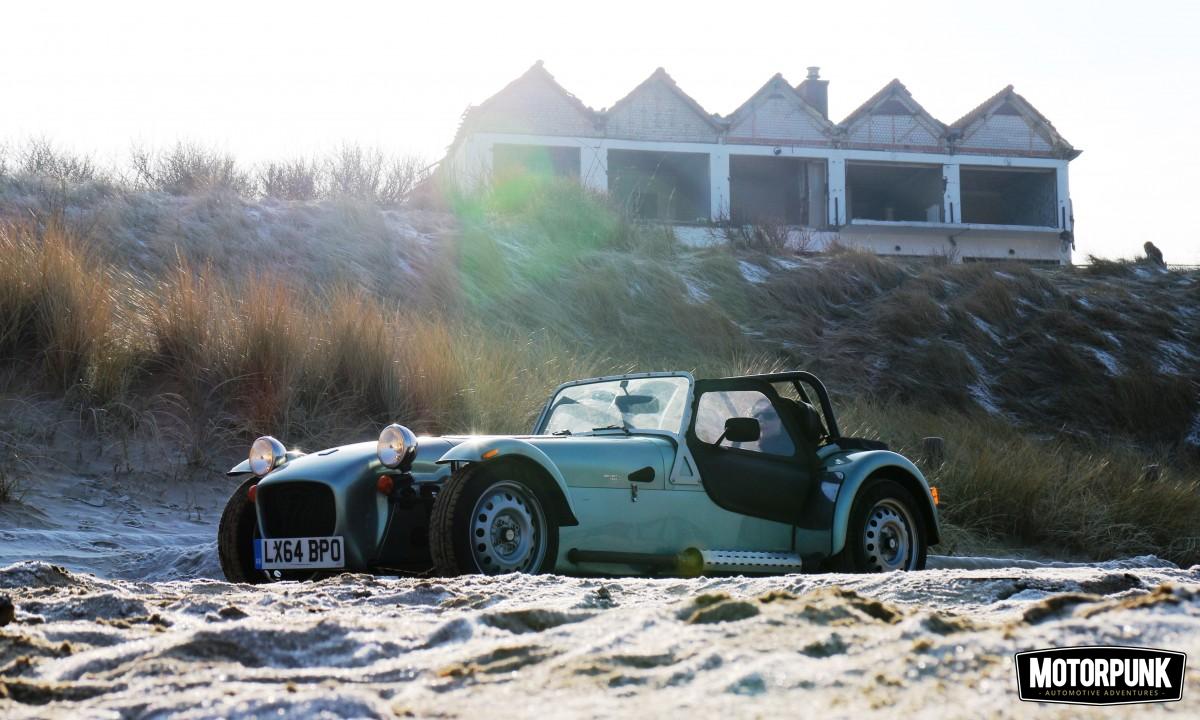 Do you own a more daring daily driver? Let us know. Otherwise, stop faffing and buy a Caterham – because you can use them all year round.
ETA – We’ve just bought one (!) OK, this is cheating a bit…

Pics; Moi, Lex and one by Rad who laughed his y-fronts off.