In the 1960s the Lockheed Skunk Works in Burbank, California, went ballistic, developing a Top Secret spy plane for the CIA. Under the ironic codename of Oxcart, they created the Blackbird, a Mach 3 plus hotrod that no missile or fighter could catch. In the air it was unstoppable, but on the ground it needed a little assistance. That help came courtesy of Buick, their V8 engine, and California hotrod legend, Frank Kurtis.

Two modified J58 turbojet engines powered the Blackbird. A single engine produced 32500lbs of thrust, delivering 160,000 shaft horsepower, the latter being equivalent to the entire output of the Queen Mary ocean liner. In short, the J58 was a beast, gulping oxygen and guzzling its bespoke JP7 fuel. Designed by Shell to operate at extreme high temperature, it was a form of kerosene that was difficult to ignite. This was quite handy as parked Blackbirds leaked. The realities of thermal dynamics at Mach 3 caused the aircraft to swell and expand in flight. When it cooled and contracted, JP7 seeped from its joints and seams. Blackbirds had lots of drip trays. 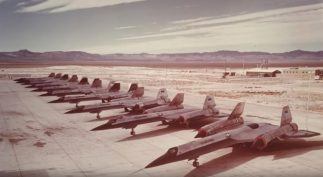 To ignite JP7 fuel, a special chemical called Triethylborane was injected into the combustion chamber. TEB as it was referred to, was the opposite of JP7. Its ferocity was such that it would burn on contact with oxygen. Before utilising TEB, the engine had to be spinning between 3200rpm and 4500rpm. This required an external power source with a bit of oomph.

Based just down the road in Glendale, California, Frank Kurtis was renowned for his engine tweaking skills, creating a line of dominant post war Midget racers, and the Kurtis Indy cars. Lockheed reached out to him to build them something strong and powerful enough to kickstart their bird. Kurtis came up with a monster, officially known as the AG330 Start Cart. Just thirty were built. They remain to this day, a US Air Force legend. 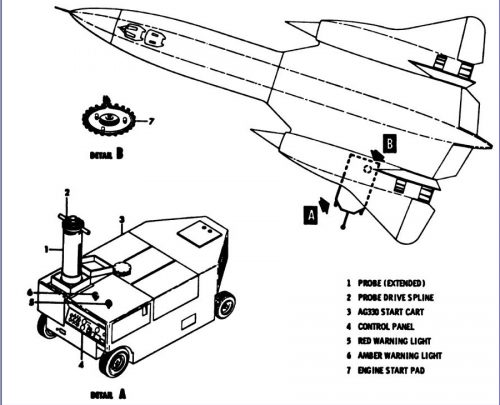 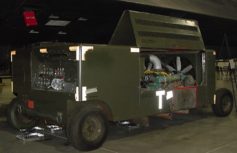 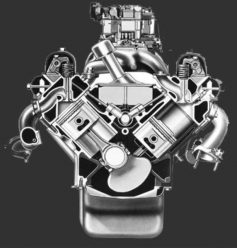 The AG330 consisted of two Buick V8 Wildcat engines, arranged side by side in a cradle. The Dynaflow transmissions of each engine were linked together by a cogged belt. This fed a common drive coupling shaft that rose out of the start cart at 90 degrees and fed into a splined port in the wing of the Blackbird to spin up the J58 engine compressor. It was critical that this coupling operated as smoothly as possible and Kurtis deemed the Dynaflow best for the job.

The V8 engines were from the range topping Buick models, the Skylark Gran Sport, Riviera and the Wildcat. From 1963 the big boy of the range was a 425cubic inch, 7litre engine producing over 360BHP and 445lbs of torque. Designated Wildcat by Buick, they were popularly known as Nailhead engines due to the layout and size of the long stemmed small valves, resembling nails in a plank. 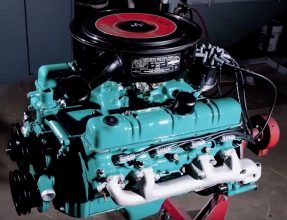 The Start Cart engines were unrestricted, and ran straight piped exhausts. The start up by the AG330 was an event akin to a Faustian opera. The ground crew had to position themselves carefully to avoid being roasted by the Start Cart as the Cart operator throttled up the twinned Nailheads to rotate the driveshaft coupling, and in turn, the J58. The noise was described as solid thunder, enough for the ground crew to become disorientated without appropriate head, ear and eye protection.

With the Buicks piling on revs to crank up the J58, a shot of TEB could be released to really get the party started. The Blackbird would explode into life, emitting a goblin green flame from the J58 tailpipe. The whole procedure was repeated for the Blackbird’s second engine.

Such was the drama of the AG330 Start Cart that even after the Nailheads were later replaced with Chevy V8 marine engines, they were still referred to as ‘The Buicks’. A pneumatic system was introduced in the late eighties, providing a sanitised starting procedure. The ground crews however, never forgot the thrill of firing up the Buicks and stirring the Blackbirds to life.