Resembling the love child of a Transformer and a Thunderbird, Big Wind is the Top Trump of fire fighting vehicles. 2021 marks thirty years since this machine made its official debut when it helped save the world from an environmental disaster in the aftermath of the 1991 Gulf War.

Retreating from Kuwait, the Iraqi military set 700 oil wells ablaze. The fires consumed millions of dollars of crude oil a day, creating a poisonous cloud of soot and dust that blotted out the sun and stretched for 800 miles, killing wildlife and spreading toxic rain as far away as Thailand. An international army of specialist fire fighters gathered to quell the hell fires; When Big Wind arrived at the scene, the half tank, half jet fighter created a stir almost as powerful as the 21,700lbs of thrust it can blast at a burning oil well. 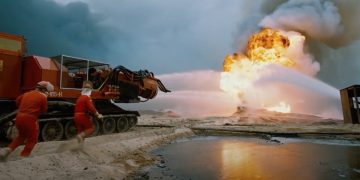 The origins of Big Wind came from a different kind of doomsday scenario. Seeking a way to swiftly decontaminate military assets affected by a chemical attack, the Soviets rigged up a jet engine to a truck and blasted tanks with cleansing foam sprayed into the jet wash. They also used them to clear airfields of snow and trialled them to use on oil well fires. The trucks and the small jet engines proved useful but were sometimes limited by the environment the vehicles and crew were required to work in.

In a small town near Budapest, some Hungarian engineers thought they could improve on the idea by raiding the back catalogue of Soviet military machines to splice together two of its greatest hits. They started by taking A WW2 vintage T34 tank, removing the turret and gun and replacing it with a traversable platform for a pair of turbojet engines used in the classic MiG 21bis fighter aircraft. Mounted side by side, they have the ability to independently elevate and depress, like the tank gun they replaced. 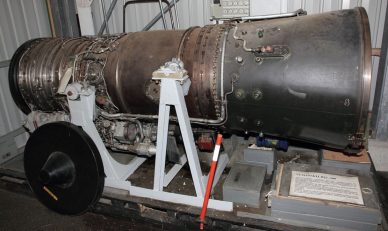 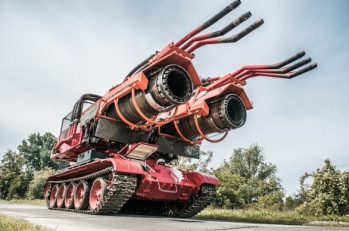 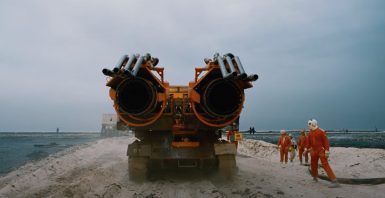 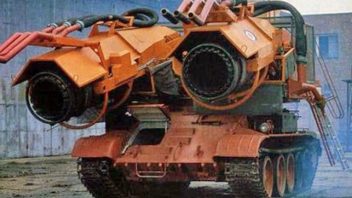 The Tumansky R25 jet engines were modified and limited to 70 percent power to stop them overheating, and to prevent unnecessary fatigue to both engines and tank. Even with these restrictions the maximum run time for the jets is twenty minutes. Opening up the throttles induces a howl that can reach 130 decibels. A trio of high pressure pipes and nozzles above each jet engine inject water and fire suppressant chemicals into the jet wash at a rate of 220 gallons per second.

A driver, operator, and supervisor crew the 46tonne monster. They wear FIA standard nomex suits and a serious pair of oven mittens. The driver sits behind a fire retardant hatch with next to zero vision. He manoeuvres Big Wind by observing a panel of LED lights activated by the supervisor, who walks by the tank and relays his instructions via a Cold War era version of a Game Boy controller, plugged into its side. Light sequences tell the driver, left a bit right a bit go forwards, go back, and a special light that ought to translate as ‘for the love of God, stop!’ The tank is limited to 1st gear only, and about 3mph. It helps limit wear and tear to the platform; also because you don’t want to charge toward something that can melt you.

The operator runs the jet engines and the water feed, and directs them at the fire. He lives in a reinforced compartment behind the jets. . In front of him is an eight hundred gallon tank of Kerosene to keep the Tumanskys turning, and a cage to stop him and other odd bits disappearing into the turbine blades.

The supervisor walks outside the tank to identify the best approach to the fire and observe the surrounding environment. Critically, he has to monitor wind speed and direction. Temperatures at the core of the fire reach 2000 degrees Fahrenheit. Ground surface temperatures around such a fire can see 1000 degrees, and the superheated air in the immediate vicinity can top six hundred. Big Wind goes in danger close for maximum effect, just twenty five feet away from the burning well, so time is of the essence as the men and the tank can only endure the heat for so long before they need to retreat. As the operator fires the water into the jet wash it meets the superheated air around the fire and turns to steam. Propelled by the jet engines at around 700 miles per hour, or just below the speed of sound at ground level, the steam slices into the bursting crude and snuffs out the flames. 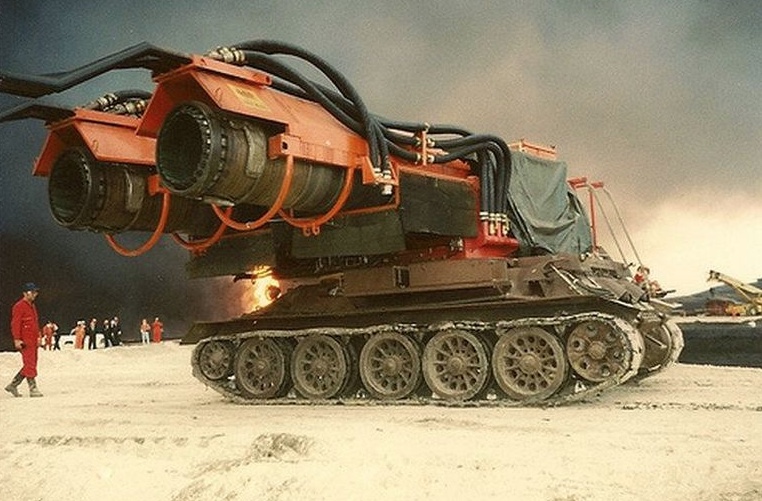 Big Wind is still going strong today. The prototype that landed in Kuwait has received a host of upgrades. The T34 hull has been replaced- it was a bit knackered after Kuwait- so Windy now sports a classic Cold War era T55. He’s available for hire from MB drilling. Only oil barons need apply.

I love this thing for its capability and its engineering style. It has that ‘two blokes in a shed’ vibe about it; thinking outside the of the box and utilising whatever is to hand to offer a practical solution to a complex problem. It’s MacGyver, with a distinctly Eastern European flavour.

Best of all, Big Wind is an example of how military technology can be repurposed for the benefit of mankind. Windy’s analogue, parts bin engineering recycled to snuff out the fires of hell, is something to celebrate. Happy birthday Big Wind. Thirty years later, and still no one can hold a candle to you.