In 1950 Ben Carlin left Halifax, Nova Scotia, on a circumnavigation of the globe by sea and land that would take eight years to complete – an incredible feat that has, to date, never been repeated. Automotive adventurers just don’t get any better than this. And yet, surprisingly few people have actually heard of this antipodean tally-ho hero, or his amphibious Jeep, Half-Safe.

Born in Perth, Australia, Carlin had joined the British Indian Army during World War II as a Field Engineer. One day, while perusing the surplus hardware, that littered the RAF airbase he was stationed at, he stumbled across, what the GI’s had nicknamed, a ‘Seep’.

Based on the famous Willys Jeep, the Ford GPA was an attempt to create an amphibious landing craft that would allow the American Infantry to swim onto the beaches on northern France – load up on baguettes, ‘baccy and Beaujolais – and then bomb down the autobahn to battle the Bosch. 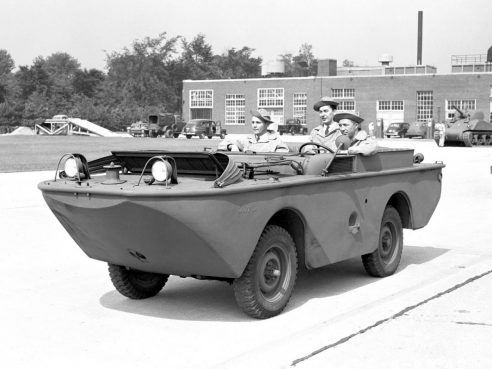 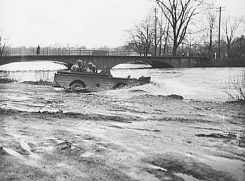 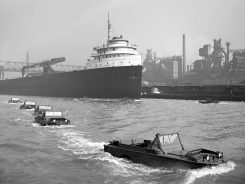 Unfortunately, they were a bit crap, and most were offloaded to the Soviets to assist in their campaigns on the Eastern Front. So how this one ended up on an Indian airfield was a bit of a mystery. However, for all its flaws, the Seep had clearly made an impression on Major Carlin. “You know, Mac,” he pronounced to the base’s Squadron Leader, “with a bit of titivation you could go around the world in one of these things.” His RAF chum thought he was crackers.

Two years later, and living in in Maryland, USA, with his wartime sweetheart, Carlin finally sourced a 1942 Army surplus GPA (serial no.1239) at a government auction in Washington DC. With a winning bid of $900 he brought it home, and set about modifying it for their grand transglobal adventure by fitting a rudder and a bow (that also doubled as an auxiliary fuel tank) which extended its overall length to 18 feet. Inside the cabin, a double bunk was installed, and the dashboard was embellished with aircraft navigation instruments, as well as a two-way radio. Fully laden, and carrying 220 gallons of fuel rather than the original 12, the transformed Seep now weighed close to three tons.

Ben had originally approached the PR people at the Ford Motor Company to sponsor the couple’s trip, but Ford flatly refused, fearing that two drowned newlyweds could be bad for business. Indeed, most folks thought that the venture was sheer bloody lunacy. Fully aware of the perils that lay ahead, in an untested vessel lashed together from Army surplus odds n’ sods, Serial No.1239was rechristened Half-Safe, inspired by a popular deodorant jingle from the 1940s. 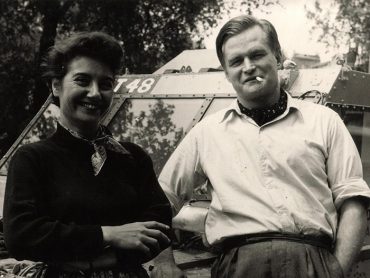 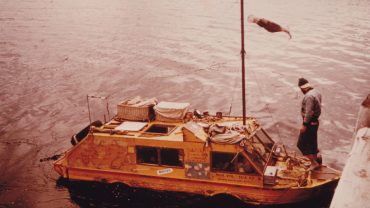 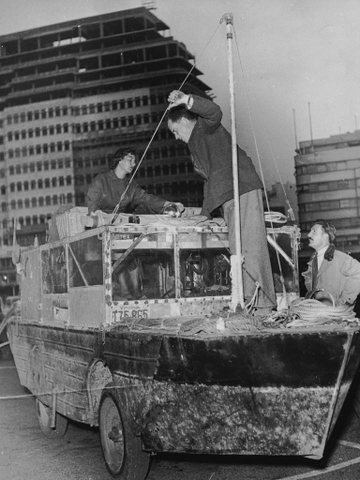 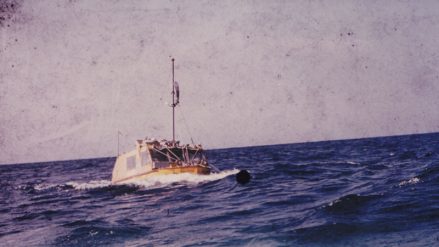 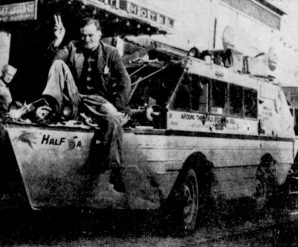 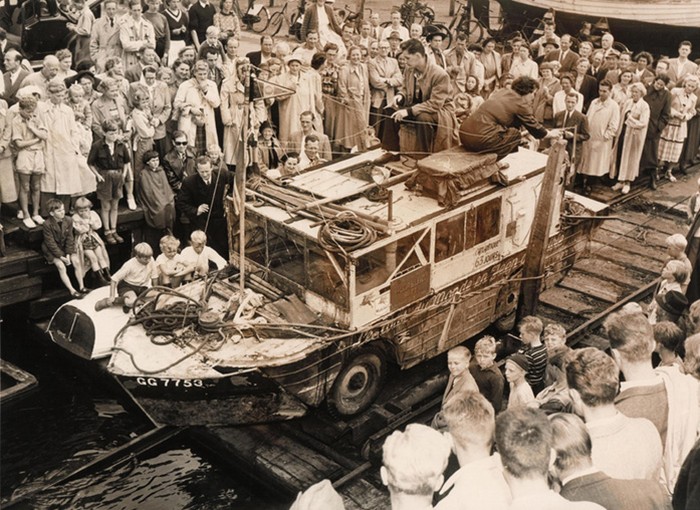 The Carlins first attempt to cross the Atlantic in January 1948 ended abruptly when the radio and steering gear failed. The second was aborted when they nearly died from carbon monoxide poisoning thanks to a cracked exhaust. The third attempt was terminated due to various mechanical problems. The fourth when the propeller seized due to a lack of lube. The fifth voyage was halted when the clutch burnt out. The sixth when the newly-designed long-range fuel tanks that were towed behind Half-Safe, were lost at sea. However, in the summer of 1950, the seventh attempt to cross 1,700 miles of open water from Halifax, Nova Scotia, to Flores in the Azores, actually went pretty well – only stopping several times to remove the cylinder head, decoke the valves and replace the head gasket, as Half-Saferocked about on the ocean swell!

It took two and a half years to sort out the hopped-up Seep’s numerous quirks and finally drive away from the shores of Halifax … which was, according to Ben’s memoirs, a bit of a hole; describing it as “the finest departure point anyone ever had. I’d gladly leave Halifax any time for anywhere in anything. The city glows with the same rich, warm flame of enlightened liberalism which lit medieval Aberdeen.”

From Flores they hopped by Horta on the Island of Faial, and then Madeira, before landing on the coast of Morocco in March 1951. Dehydrated, famished and caked in soot and grease, they were relieved to get Half-Safeback its wheels. Driving through North Africa the Carlins were forced to travel mostly at night as the Seeps’ steel hull heated up in the blazing sun. Aftercrossing to Gibraltar and a leisurely tour of continental Europe the Carlins finally parked up, for some much-needed R&R, in, of all the places, Birmingham.
After writing a best-selling book about their adventures, and working as a jobbing engineer, the couples’ coffers were refilled, ready to pick up from where the had left off. Half-Safehad a good going over, with help from his old RAF pals, and in early 1955 the Carlins were on the road again; travelling through France, Italy and into Yugoslavia were they got their first puncture. Swimming across the Bosphorus, Half-Safe landed in Asia, before crossing the Middle East and the “murderous roads in Persia.”  By the time they reached Australia, Elinore Carlin had had enough. Tired of the cramped cabin, endless seasickness and the constant fear of asphyxiation from the Seep’s smoky 60 hp four-pot.

With stopgap co-pilots filling in, Ben trudged on. Slowly making his way eastwards via Burma, Hong Kong and Japan, he eventually reached the Aleutian Islands of Alaska and drove overland to Anchorage. Carlin covered the last leg solo, from Seattle to San Francisco, where the tally-ho hero met up with his wife for the first time in two years. On May 13, 1958 – after 8 years, 11,050 miles, 38 countries and around $35,000 – Ben Carlin completed the world’s first and only circumnavigation by amphibious vehicle.

Ben Carlin died in 1981, and Half-Safe was put on display in a glass enclosure in the grounds of his old school in Australia. Money from his estate funds an annual award for “the proficiency of the English language with the avoidance of clichés.” A prize we at MotorPunk are unlikely to ever win, sadly. Ben Carlin however, was a bloody good writer, and the book is a rollicking good read – an old-school adventure, full of interesting techie detail and tall tales of his incredible journey across land and sea.