The Rover V8 rightly stands among some of the British motor industry’s greatest achievements; during its 37 year production run it transported Ministers and Royalty in the stately Rover P5B, powered mud plugging Land Rovers through war zones and helped to produce some of the World’s quickest production sports cars, including the original Morgan Plus 8. The lightweight 3.5 litre powerplant was so versatile that in the 1980s it was being used in British Leyland’s TR7V8 rally cars and the mechanics’ vans that had to follow behind to fix them. In fact, my earliest childhood memory of that trademark V8 burble was not from the exhausts of some fire-spitting piece of automotive exotica but from the back of a Sherpa-based Ambulance en route to Leicester General Hospital. Despite my smashed tibia, and heavy sedation with laughing gas, I can still distinctly remember thinking as we shot through the rush hour traffic ‘Oooh, this sounds good.’

Strictly speaking, the Rover V8 wasn’t a purely British affair. The story begins in the early ‘60s when Rover began looking to see if their American cousins could supply an eight cylinder replacement for its lacklustre straight-sixes in its executive models; by the Swinging Sixties American muscle was becoming increasingly fashionable and powerful V8 lumps from Ford and Chrysler had already made their way into British performance cars including the AC Cobra and Jenson’s CV8. Quite by chance, as Rover managing director Bill Martin-Hurst was taking a break from schmoozing Chrysler’s top brass, he stumbled across an old Buick 215 V8 gathering dust on the workshop floor of a marine engine builder in Wisconsin. This engine – liberated from a wrecked Buick Skylark – was actually being modified for a racing powerboat project. As luck would have, it Martin-Hurst discovered that this compact all-aluminium V8 was a perfect fit for Rover’s P5 saloon, and its tooling was up for grabs since GM had recently stopped building it. 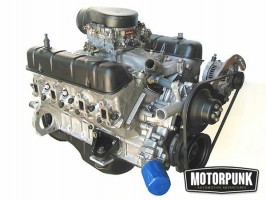 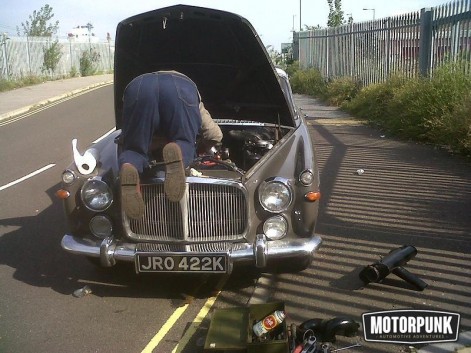 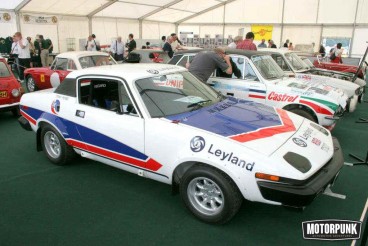 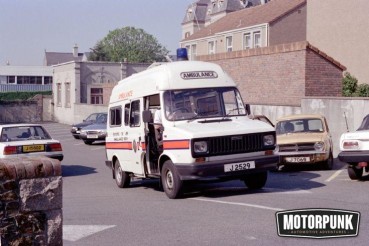 Back in Brum, Rover’s best boffins got on with fettling the V8 for European roads. At first GM’s consultants couldn’t understand why these British engineers insisted on raising the lazy revving Buick’s red line from 4,700 to around 5,500rpm. ‘Why do you need all those revs? … people just don’t drive like that!’ one American slurred. Rover engineers, determined to show him otherwise, decided the best thing to do would be to strap him in with a factory test driver (and well-known nut job) for a 100mph cross-country hoon across the West Midlands. An hour later the man from GM emerged from his white-knuckle ride visibly shaken, but also much wiser to the kind of punishment Rover’s engine would be expected to withstand from its more ‘enthusiastic’ customers in Europe.

The revised 3528cc Rover V8 was eventually unveiled to the British public at the 1967 Earls Court Motor Show under the bonnet their flagship P5B (‘B’ being for Buick) saloon. Weighing less than most contemporary six-pots, Morgan were the first British sports car manufacturer to realise the V8’s potential. Peter Morgan quickly recruited respected race car builder, Maurice Owen, to project manage the production of a Plus 8 prototype using a modified Plus 4 chassis, standard Moss ‘box and limited slip differential. With its Rover V8 producing a healthy 158 bhp, and 210 Ib ft of torque, the car was an instant hit when it was launched just a year later. Hitting 60mph from a standing start in just 6.7 seconds the Morgan Plus 8 was the fastest accelerating production car of its time and could show clean pair of heels to any contemporary offerings from Lotus, Aston Martin or Jaguar. In fact, it wasn’t until the E-Type gained its whopping V12 in 1971 that many Plus 8 drivers were ever seriously challenged in the ‘Traffic Light GP’. 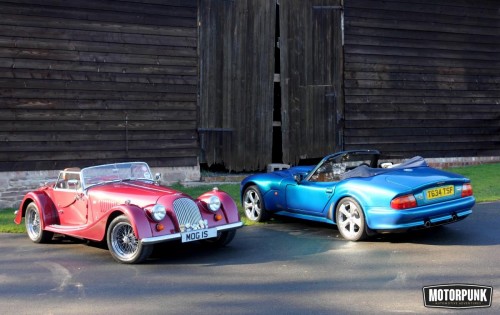 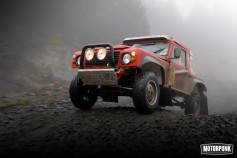 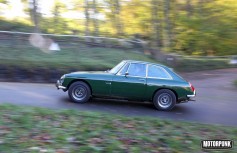 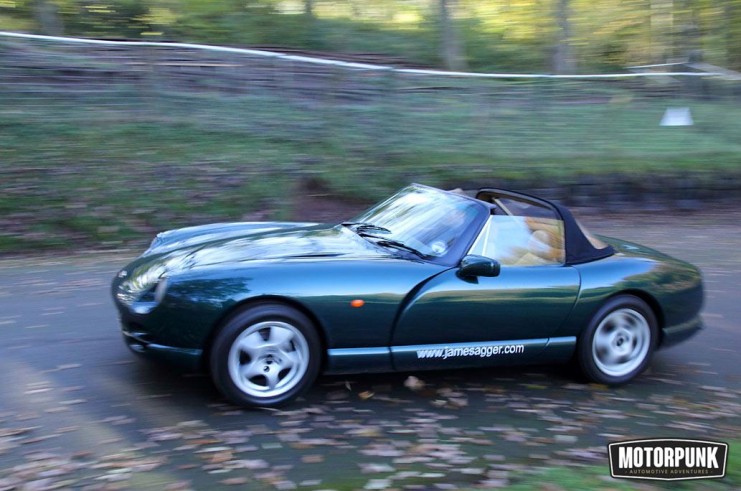 Following Morgan’s lead several other great British sports car marques, including Marcos, Ginetta, MG, TVR and Westfield have all campaigned variants of Rover’s trusty V8 thanks to its lightness (the original’s dry-weight tipping the scales at a mere 170 kg), compact dimensions, reliability and responsiveness to tuning tweaks. During four decades of production the engine was continually modified and improved to meet the needs of each new generation of car builder; its original engine’s bore of 3.5 litres was continually enlarged to create variants of 3.9, 4.5 and ultimately a 5.0 litre. This final version made its way into many range-topping TVRs, but had its ‘last hurrah’ in the Defender-based Bowler Wildcat which competed in several Dakar Rally Raids; this awesome 340bhp off-roader having more than twice the power of Morgan’s Plus 8.

However, size isn’t everything. Creating the perfect sports car requires a delicate blend of power, poise and panache. And so the Great V8 Debate has raged for nearly half a century: what really is the greatest Rover V8 powered sports car ever built? That is why my colleague, Rich, and I set out to finally set the record straight by getting together some of the most successful proponents of this famous powerplants for a little group test at the historic Shelsley Walsh hill climb course in Worcestershire.

The very last Buick-derived V8 rolled off Land Rover’s Lode Lane production line on May 4th 2004, and was immediately mounted on a plinth at its Gaydon site. It’s unlikely that we will ever see another powerplant like this again – a mass produced engine that was so versatile and robust that it could be serviced in a military ‘Landie’ by a soldier standing on top of it – or so compact and tuneable that it could form the basis is of a Formula 1 engine as it did in the Repco-powered Brabhams which won the F1 championship in 1966 and 1967. 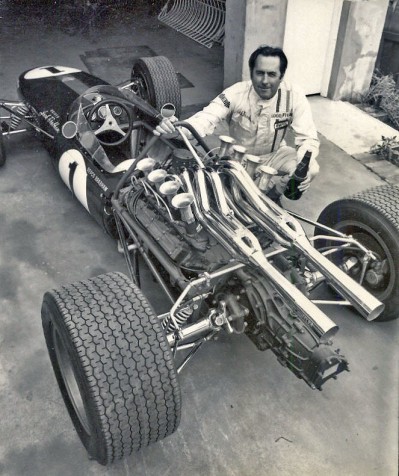 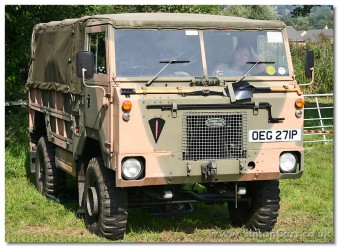 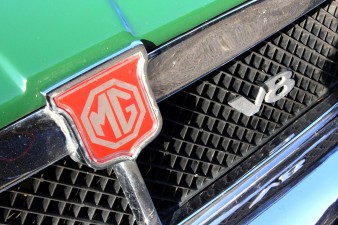 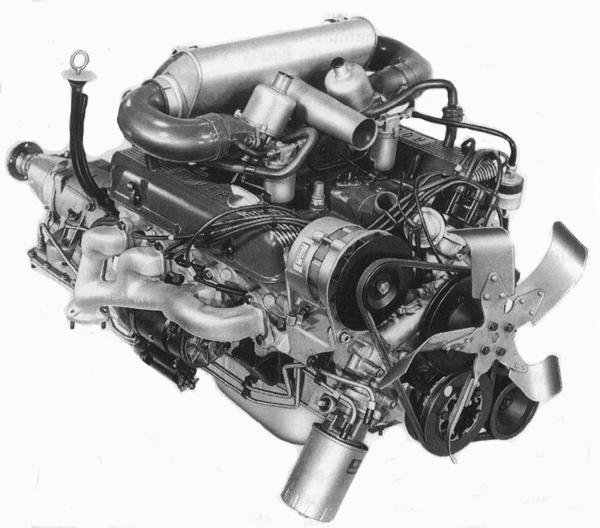 Morgan pioneered the use of Rover’s original 3.5 litre V8 within a sports car chassis and nailed it straight away; although the new BMW M5 powered Plus 8 carries the same moniker, we reckon that the real spiritual successor to Peter Morgan’s original Plus 8 is another Anglo-American hybrid from the Pickersleigh Road stable. The 3.7 litre Mustang engined Roadster has a similar ‘blue-collar’ motor designed for applications across Ford’s whole product range, from muscle cars and staid sedans to its utilitarian trucks and SUVs. It burbles with a similar Basso Profundo and, like the Buick 215, punches well above its weight. Unfortunately, the NHS has no plans to plop this V6 into its fleet of ambulances and we at MotorPunk think that’s a missed opportunity; to some young car fanatics the rumble of a big multi-cylinder can be a fabulous distraction from even the nastiest of bone fractures.

A big thank you to Mark Constanduros at Shelsley Walsh for letting us loose on the fabulous hill climb course and all the chaps that brought their pride and joys along: