Reading the comments on our popular classic water-cooled Porsche video*, I thought I ought to tap out a few words on the contentious subject of pronunciation. In the film, both Dr O and I pronounce Porsche the way we always have. Without the ‘uh’ sound at the end. This seems to have riled a number of people who left comments to insist we “spell” [sic] it, variously, Porsch-a, Porsch-eh and Porsche-uh. As you can see and hear from the film, we are both 40-something chaps from the Midlands who pronounce glass to rhyme with ass and who know our 924s from our Panameras, even if some folks are uncomfortable with our pronunciation of the marque’s name. That’s ‘im and me below. This picture must not be used a a masturbatory aid, please. 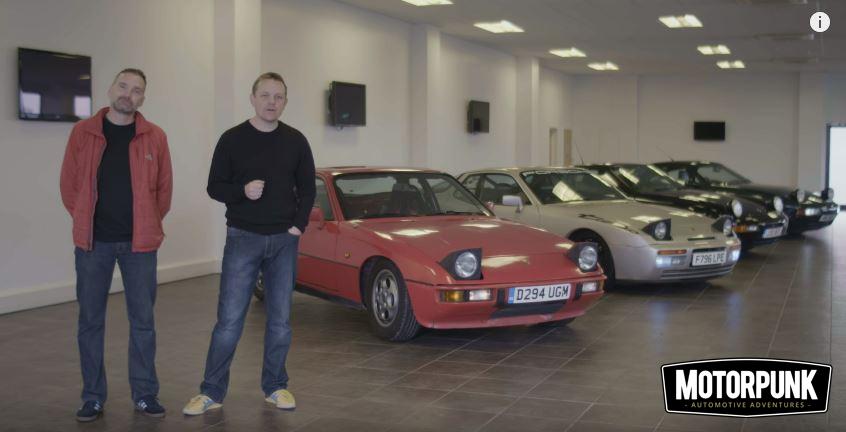 What YouTube viewers might not know, and MotorPunk readers can glean from my Germanic nom-de-plume, is that I speak German. I have lived, worked and even occasionally been arrested there. Actually, even Welsh-speaking Dr O can comfortably order a Currywurst mit pommes while waiting for ADAC to turn up at the ‘ring and rescue him. Again. So, we choose to pronounce Porsche this way. And that might infuriate professional YouTube video watchers even more. You know that awful chewy Spanish sausage that fat daytime telly chefs call ‘Choritho’? I call it Choritzo. With the zed. Now, I do know the Spanish way of saying it might be considered correct by a fair few Brits, and others, but it would make people like me sound a bit of a tool. Also, I am not in Spain, I live in Melton Mowbray. British people are likely to pronounce foreign words a certain way just as foreigners happily mangle their English. I have an English friend who pronounces Ciabatta as see-ya-batter, and a Norwegian friend with otherwise impeccable English who can only attempt ‘Guinea pig’ when topped up on vodka.  I don’t correct these people because it would make me seem like an arse and (and this is my point) IT DOESN’T BLOODY MATTER!

There is a myth that during the war suspicious Brummies would ask iffy-looking types to say ‘Wolverhampton Wanderers’ to try and catch them out as foreigners. I have a fair few German friends who would pass that test quite easily and not all of them are Nazis spies. I wonder how they’d manage with Wolseley or Willys-Knight, though.  Have you heard Americans trying to say Jaguar or Gallardo? And do you realise how terrible all us non-Francophiles must sound to your average Parisian when attempting to say Citroën, Renault or that other French one?

If Dr O and I bow to the pressure of pronouncing Porsche with an ‘uh’ then where does it stop? Do we Germanify everything? Daimler Benz would have to become ‘Dime-ler Bents’, Maybach ‘My-bach’, Volkswagen ‘Folks vargen’ and BMW ‘bay em vay’. And what of Italian names, like Lancia? No, we’ll stick with what we’re comfortable with, thanks. Anything else would makes us sound even more like a Countach.